A pregnant question that we saw in:

Recall how Greenspan’s rate hikes in 2004 proved bullish, so bullish that they created a bubble. The lesson was that when rate hikes are so regular & pre-announced (25 bps at every Fed meeting), they can be modeled. And anything that can be modeled can be programmed and hedged which enables investors to remain bullish or get even more bullish perhaps because the uncertainty is removed.

Janet Yellen copied this tactic this past Wednesday. The market reaction in the immediate aftermath of the FOMC statement was risk-off but, as her presser proceeded, either her soft gentle talk lulled every one into sleep (as it usually does to us) or the markets understood her actions to be Greenspan 2004 redux. How can we tell? The 30-year bond & TLT actually rallied while the rest of the curve fell in price. Greenspan conundrum redux? How did the stock market react?

In our experience, the next day is a better reflection of what the markets think of the Fed’s message. So how did the various markets perform from about 1:45 pm on Wednesday (pre-FOMC) to Friday’s close? In a drowsy fashion that spells Yawn!

The biggest moves were in the 2-year yield which rose to 1.44% and in precious metals with Gold down 1.3% & Silver down 2%. This is the sort of action you get when Yellen tells you that the BS reduction would be a paltry 10 billion dollars a month with a peak of $50 billion as she reduces the number of rate hikes they had signaled earlier. No wonder VIX fell by 4.7% from pre-FOMC Wednesday afternoon to Friday’s close.

So how would you summarize the message of the markets? As Lawrence McMillan of Option Strategist did on Friday:

Rates along the 10-2 year curve did rise as they should have. But the 10-year yield only rose by 2.5 bps while the 5-2 part of the curve rose by 5 bps. That fits the consensus rates will rise but not too much. That raises a question:

About 8 trading days ago, the 5-year yield was at 1.70%, a level Gundlach talked about in his webcast on Tuesday, September 12. It has bounced by about 17 bps in these past 8 days to close at 1.87%. All this because of one additional rate hike in December 2017? What if the 5-year yield retraces some of this steep swift rise?

As we said, the 30-year yield acted in a classic “conundrum” fashion by falling by 1.5 bps from the pre-FOMC Wednesday level.  And this level of the 30-year yield is only up by 5 bps from its September 12 close. This is what Gundlach highlighted in his webcast – the 30-year has acted very differently from the rest of the curve and that until the 30-year yield breaks above its long downtrend, no point thinking about the end of the Treasury bull market.

Carter Worth of CNBC Options Action said that this rise in Treasury rates is similar to the 5 previous counter trend moves in which rates moved up by 20-25 bps in a 2-3 week period. So he expects Treasury yields to fall from here:

If rates do trend downwards, that’s not bad for stocks especially with credit singing a happy tune: 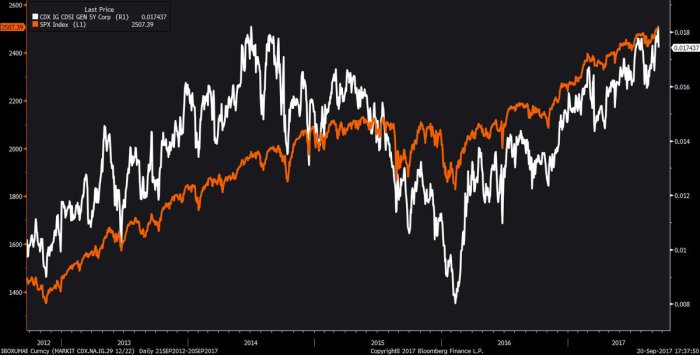 XIV, the anti-volatility security, has been in a terrific bull market this year. This week was no different with a 3.5% rally. But discerning eyes seem to be seeing a different picture in the XIV chart. 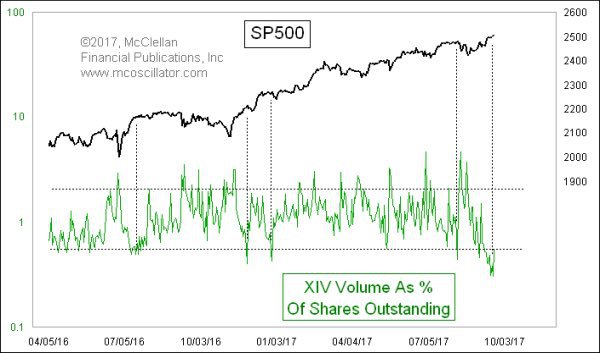 EEM fell by 1% from pre-FOMC Wednesday afternoon to Friday’s close. After all, a hawkish Fed reducing liquidity however modestly with a small rise in the US Dollar and a small rise in Treasury yields is a negative for emerging market equities. The biggest hit in hot emerging markets came in India with EPI down over 4% on the week.

The reasons for weakness in Indian stocks are both fundamental & positioning related. The enthusiasm about Indian stocks had been getting frothy with Indian households getting more invested. This has always been a cautionary signal and especially so now because the main reason for greater over weighting of stocks was disappointment about returns from real estate and gold. Also Indian household investors have a track record of chasing performance.

Typically such periods of frothy enthusiasm have been followed by some bad news that takes the shine off. A much lower than expected GDP growth of 5.7% in the recent quarter has created a panic of sorts in Indian media as any bad news does. Consumer spending has dropped off and so has Capex. The latter is nothing new but the former is new. Demand had never been an issue in India; all the bottlenecks had been driven by lack of supply.

This particular demand problem has been driven by too much success; success in getting Indians to put most of their “undeclared” cash assets into the banking system. While this good for governance and great for higher transparency & higher collection of taxes, it is pretty bad for consumer spending. Imagine a small businessman who makes about $100,000 in India and who has traditionally avoided declaring this income and thereby avoided paying taxes on say 80% of this income. So $80,000 of such undeclared income was kept in cash or non-transparent form by this businessman. A portion of such cash used to go towards real estate and gold. What remained was spent. It is this sort of cash that was the impetus of what seemed like insatiable consumer demand in India.

Thanks to the success of demonetization, most of the previously undeclared cash was deposited in banks. Secondly, regulations enforcing transparency weakened prices and demands of apartments. Employing workers in the informal sector of the economy became more expensive because paying them under the table is now much harder and risky. So what should be very good for the Indian economy in the longer term has become the reason for a cash crunch & a serious weakness in consumer spending and job growth. Meanwhile, large corporations still have too much debt and the banks are loaded with non performing loans.

The Government is now expected to increase its fiscal spending to create demand and that is not positive for the Indian Rupee which has been strong this year. No wonder the Indian stock market is suddenly showing weakness. This is good news for those who went tactically underweight a couple of months ago. Because the reasons for current weakness are actually beneficial in the intermediate term with the new tax regime getting implemented and the conversion of Indian economy from a corrupt underground economy into a more sound and better structured economy.

In our August 5, 2017 TACS article, we had described the reality of the Trump presidency and his campaign as an ascending step function:

Look how much better the Trump White House is functioning with General Kelly as Chief of Staff.

We bring this up to remind readers that President Trump rarely gets credit for being smart because his style comes across as undisciplined and jarring. But it works. No wonder 98% of those who voted for him still support him and his rating among Republicans is 85% (according to figures read out by Joe Kernen on CNBC Squawk Box) while the ratings of McConnell and Paul Ryan are in the teens.

This brings us to North Korea. Our belief is that President Trump is engaging in disrespectful rhetoric about Kim Jong un to enrage him and provoke him into making a mistake. We think President Trump has made his decision and General Mattis has made his plans & is ready to implement them. But they don’t want to be pre-emptive if they can avoid it. Hence the increased pace of harder sanctions and the insulting rhetoric. It feels like Kim is losing his cool and reacting to President Trump’s derision.

As a corollary, we think when the shoe drops, it is likely to do so without any warning. And it won’t be a single shoe. The speed & ferocity of what General Mattis launches will be something that makes words like “shock & awe” seem like 4th of July fireworks. The only good thing about this from a markets point of view is that buying protection is as cheap as it has ever been. And Gold is getting cheaper too, thanks to Chair Yellen.