The term “douce” from the classic Jack Lemmon-Shirley McClaine movie “Irma la Douce” means gentle, sedate.The Irma facing Florida is as anti-douce as you can get. When Florida officials called it a “nuclear” hurricane,  search for other terms ended. We have never seen a potential danger as Irma poses, a hurricane as big as Texas in size, with hurricane 4 level winds that have been sustained longer than ever before. There is nothing to do this weekend but to pray for the people of Florida, South Georgia & South Carolina. No one has any idea what we will all wake up to on Monday morning.

On one hand, the Dollar literally fell through the floor and sovereign interest rates melted down all over the world. But the S&P remains just about 1% below its all time high despite all the tensions. First North Korea exploded a Hydrogen bomb over the labor day weekend. That seemed to ratchet up tensions with UN Ambassador Nicky Haley saying North Korea is “begging for war”. But that tension affected stocks for only one day, perhaps because President Trump made a smart deal with Democrats to get debt ceiling & continued resolution fight postponed.

Then Draghi spoke dovishly on Thursday morning and the Euro rallied, the Dollar broke down and rates collapsed both in Europe & US. The 10-yr Bund yield fell 5 bps to 30 bps and the 10-yr yield fell to 2.03% before rallying a bit. On Thursday, the worst stock in the Dow was Travellers due to the sell off in property-casualty insurance companies.

Then came Friday with media fright about hurricane Irma. And what stocks rallied the most on Friday? The same property-casualty insurers that had crashed on Thursday. Chubb & Travellers rallied by 4% on Friday. Was that because of positive comments from a brokerage firm or because the rampant fear of Irma created hope that the actual damage might be less than the feared catastrophe.

If all this was not enough, the Chinese Yuan rallied on Friday with its biggest gain in years:

As money poured into China, copper broke down hard and so did mining & resource stocks like Freeport, CLF crashed by over 6% each. And yes this was despite the Dollar again falling hard on Friday. Guess this is one more evidence that copper, iron & other mining stocks are far more dependent on China than on the US Dollar.

So how did the week end? With the daily sentiment index (DSI) for bonds at 80, for the Dollar at 10 and for the Euro at 93. These are levels that normally should lead to at least a short term reversal.

That could be the message from the S&P 500 and EM stock indices that have demonstrated impressive resiliency in the midst of all this turmoil in the weather, geopolitics and currency & interest rate volatility.

3. Calm before the Storm?

As we said, the Dollar, Interest Rate & Gold should, really should, show a bounce. If they don’t, then these could be really bad oversold-overbought conditions that suggest something malignant. What could that be? How about growth slowing?

If that is not enough, look at the chart from Saxo Bank: 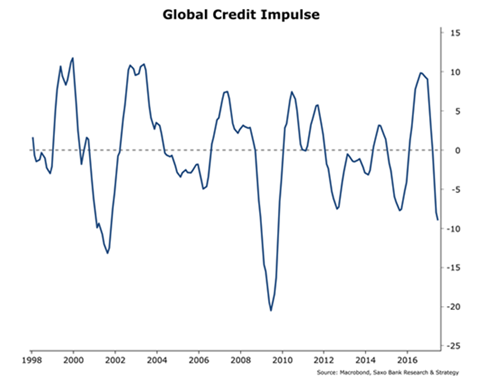 So what are their calls?

This is the sort of stuff that suspicions of “malignant” conditions can lead to. That’s why we hope for a near-term bounce in the Dollar, Rates & a correction in Gold.

If you see a possibility of such a malignant condition hitting within the next 4-6 quarters, would you choose a new Fed Chair who might upset the apple cart by being hawkish for the sake of some theoretical normalization? Or would you lean towards reappointing Janet Yellen who radiates dovishness? Forget Gary Cohn or John Taylor, we say. Keep Janet Yellen after dutifully appearing to consider several candidates.

Because if Saxo Bank is even remotely right about a deflationary environment in 2018=2019, you would need both a QE 4 and a tax cut. And that might be easier with Janet Yellen as Fed Chair vs. a new unknown.

Summoning our inner Pangloss, we hope that Irma bypasses Miami-Dade and its actual bite proves to be way less than its bark; then we hope that leads to a joyous stock rally into next week’s option expiration with Dollar rising, rates rising and Gold giving up some of its gains because “malignancy” gives us the creeps.