One of our themes is the tendency of Indians to collapse mentally & then physically. It has been ingrained in Indian society for over 1,000 years. Look at all the battles between Indian kings & invading Muslim Afghans/Uzbeks since 998 CE. Despite larger armies, Indians virtually lost every major battle. They were as brave & as talented as the Muslim invaders. But at some point in these battles, the Indian army would suffer a setback, lose their confidence and collapse in sheer panic.

The Indian cricket team seems to have inherited this characteristic as they showed in the 2017 World Cup final in Britain. They faced a Napakistani team which they had soundly defeated earlier in the tournament. But in the final, the Napaki team gave the Indians a high target. The Indians didn’t feel they could achieve that. And so, instead of trying with grit & determination, the Indian team simply collapsed. In doing so, they once again certified what Australian Brad Haddin had said in 2012:

This is not unique to the Indian cricket team. Instead, as we have written before:

We see this once again as economic panic has gripped India, an India that had embraced euphoria about becoming the country with the fastest growth rate in the world. Every one in the Indian media or even the Indian establishment was euphoric a few months ago. No one was concerned in the slightest about the structural reforms that they were needed, the pitfalls the reforms might cause and the need for careful implementation.

So when the problems became evident, when the Indian economy experienced a slowdown, the Indian media & the establishment panicked. Apart from the natural Indian tendency, the panic has been exacerbated because today’s Indian media & the entire Indian establishment is ignorant, uneducated and spends no time at all in studying any problem. Their basic practice is to shout in shrill & strident tones on TV and in speeches.

As usual, the rest of the World is watching this characteristic Indian spectacle with amusement & contempt and the EU leadership and the IMF have been forced to make positive & reassuring comments about the Indian economy. Why? Good words from “foreign” bigwigs mean much more to Indians than the same words from Indians.

All this apart, what is the real story and what lies ahead?

In a way, this problem in India is similar to the chaos that gripped India in November 2016 when Prime Minister Modi announced a sudden & total ban on 500 & 1,000 Rs. notes, the most widely used denominations in India at that time. That sudden shock was perhaps necessary to prevent corrupt holders of undeclared wealth from disposing them off. This shock did cause significant hardships to ordinary Indians but they welcomed it because they realized the corrupt were being finally punished. It was utter chaos for a few weeks but the chaos subsided, the economy grew and the Indian stock market rallied strongly in Q1 2017.

Unlike demonetization, the introduction of the Goods & Services Tax (GST) was not a surprise. This has been in the works for over a year. This new regime had been discussed with every State in the Indian Republic and the tax levels had been defined jointly. Despite this, the implementation of the GST regime has been a classic Indian disaster. The administrative, tax collection & payment systems still don’t work; companies & individuals don’t know how much to pay and how to account for the tax chain from their suppliers to their buyers.

In addition to the administrative fiasco, the brackets established by the joint Central & States committees are as ludicrous as only Indian officials can make them. A new tax regime that was supposed to make things simple made things far more complicated, insanely complicated. Witness the frustration:

And instead of reducing the tax burden on consumers, the shoddy implementation of GST has even forced smart & rational supporters of Prime Minister Modi to vent their frustration.

Given her base & the need to maintain her cool, Ms. Kishwar was relatively restrained in her tweet above. Others not so much:

This is the genius of the Indian Administrative System. They botch up necessary reforms so badly that even the horrible previous system seems preferable to the horrors of the new regime. And this time, the Indian babus (the pejorative name for Indian administrative officers) have exceeded their usual incompetence and arrogance.

The Indian Government babus live in Delhi and state capitals. The people they meet are the corporate CEO types and the analysis they use is the one they learned in their advanced degree programs. And unlike America, there is no exchange of civil administrators between government & industry or academia. So the entire body of Indian administrators have grown up within a closed system based on seniority or years of service. They are insular, arrogant and convinced they know best.

A lot of the production is in the area of hand-made goods by skilled artisans or workers who have spent years developing their craft. Such hand-made goods had been exempt from taxes since India’s independence. Now they have been brought under the new GST regime. The new taxes on handloom yarn and cloth, pottery, mats, baskets and many other handmade products, are making them more expensive than shoddier but cheaper factory made goods. That not only cuts into demand but also puts jobs of hundreds of thousands of manual artisans at risk.

The basic & eternal truth is that when business owners see reduced profits, they retrench & cut workers. We see that playing out because of the mess in GST implementation. The pain in small scale manufacturing is intense. Read some of their comments:

With this kind of a shock to the consumer economy, can any one wonder why the Indian GDP fell from 7%-handle to 5.7% in the last quarter. Actually the real wonder is how the Indian economy managed to grow by 5.7% despite these body blows to the largest sector of the economy & employment!

So is the GST so bad? No. The GST is actually a good plan to reduce business costs by making India a single market. The GST does that by business owners paying the new tax on products they buy or make and then balancing the taxes paid from the taxes they collect from selling to consumers or to the next higher step in the supply chain. But this requires a robust software system to account for taxes paid & taxes collected across the large economy.

That has been a problem. Because in the traditional Indian way of doing things, this system is not working yet. Which means instead of helping small businesses benefit from the supply chain, it is imposing a huge burden on them.The result is that every node in the supply chain is getting disrupted and retrenching instead of expanding.

Given this unholy mess, what be hopeful for the future? Because of the great wonder that we call the Indian Electocracy. The small business owners and their army of artisans & workers become the MIPs or Most Important Players in a national election. And the next national election is less than 2 years away. They have to feel hopeful about their future for at least 6 months prior to the election for the BJP to retain power.

So you saw the political leadership get to business this past week. Prime Minister Modi got feisty in a major speech this past week and said the changes he is making are going to deliver greater benefits to the poor and the middle class. Finance Minister Jaitley met with the GST regime babus and presto:

We expect more of these tax reductions to come and for the systems to be fixed. So what do the smart ones say about the near future?

All this is only because the big powers in India are truly afraid of the little Indian. Because these poor, middle class Indians who are normally treated with derision & neglect become MIPs during national elections. And if you know one thing about Mr. Modi, you know that he has his finger on their pulse.

And if there is one overriding mission for Mr. Modi, it is instituting the structural reforms that are necessary to bring better financial conditions to the Indian majority of poor and middle class. Because 1) that is his personal sacred mission and 2) it is the only way his party can remain in power for the next 10 years.

So hail the Indian voter and the great Indian Electocracy. Without it, India would be just another failed state doomed to wallow in desperate poverty.

The big question is why does the Indian Administration always make a mess of implementation before making it an eventual success. Why can’t India get things right the first time? But that wouldn’t be India, would it? 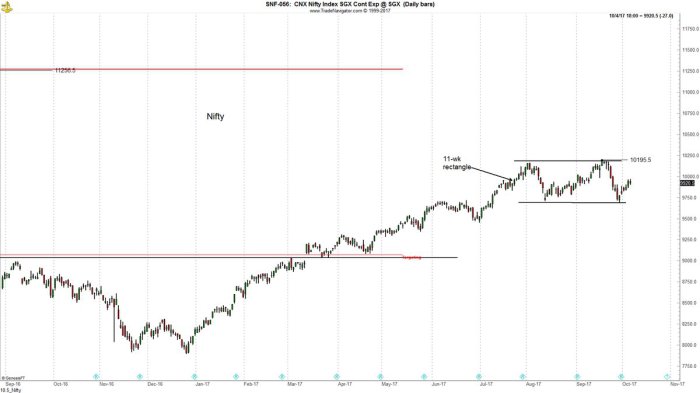 We ourselves noticed investors stepping in to buy the recent decline in the Indian stock market. What do these investors see despite the gloom and panic in India? Perhaps it is what Hugo Erken of Rabobank (the economist who had predicted the recent slowdown) said about investor bullishness:

Perhaps it is as simple as the old dictum “from weak hands to strong hands“. Just a few months ago, investing in India was the in thing. Disenchanted by falling returns in real estate and gold post-demonetization, affluent Indians were moving into Indian stocks. This is termed as chasing performance and these investors are described as “weak hands”. Because those who run from asset class to asset class chasing returns tend to run out first in a decline. As they sell into the panic, price opportunities are created that smarter and more patient investors or “strong hands” step in. That is what a smart veteran trader like Peter Brandt seems to be seeing. Hopefully, he is right.