Remember our “inexorable force” description about the non-stop rise in the 2-year yield! Everybody on Fin TV is talking about it and its inexorable cousin – flattening in all segments of the Treasury yield curve. Forget the big ranges – 30-5, 10-2, 5-2 etc; they may not be the right ones to look at, as Rick Santelli said this week. He focused on 10-7 year yield spread and we all know that Gundlach has been talking about 3-2 year yield spread.

Guess what happened to these two intra-range spreads this week? The 3-2 yield spread flattened to 10 bps this week suggesting continuously decreasing probability of a series of rate hikes. Clearly the Fed would stop cold when this 3-2 year spread inverts. The 10-7 yield spread also flattened to 11 bps making Santelli wonder if this spreads inverts before the big range spreads.

Not so fast, as Coach Lee Corso says on Saturday. An amazing thing happened this week. The inexorable force of 2-year yield going up met an immovable resistance and the force backed up hard. In a classic Glory be afternoon, the 2-year yield FELL by 4.5 bps in about 2 hours.We thought that sort of action had been outlawed by the Treasury market.

What was that immovable resistance? It was the will of the Federal Reserve as communicated by the Fed minutes released this past Wednesday afternoon.These dovish minutes and the dovish comments about inflation by soon-to-be Un-Chair Yellen stopped the 2-year yield rise and pushed it back with a force that even Fletcher Cox can’t conceive of matching.

Whom would you pick to stop a run?

Jim Cramer can keep his Cox; we will take Yellen, betting, of course, that on December 13, she will repeat the dovish signal she sent via this week’s Fed minutes. To those who still think the Fed minutes are released to shed light on what was discussed in the previous FOMC meeting, we say wake up! Look back and you will see that the Yellen Fed has often used the Fed minutes release as a vehicle to send updated signals of their revised intentions.

This Wednesday should also serve as a warning to the perennial flattening camp. A mere whiff of Fed dovishness steepened the yield curve with bullish intensity. The 5-year yield fell by 6 bps on Wednesday while the 30-year yield only fell by 1.8 bps.  Imagine what could happen if Chair Yellen reverses market’s sentiment about Fed rate hikes on December 13?

What has been the reason for such flattening of the Treasury curve from the long end? Remember what Larry Fink said on CNBC Squawk Box on October 11, 2017?

What about demand from US Pension Funds? Any not-totally-dumb Pension Fund must be rebalancing its  portfolios by reducing equities and increasing long maturity bond exposure.

Is there an overseas angle, too?

A week ago, his Bear Traps report wrote about China – “They are trying to thread a very fine needle in China right now, credit risk is surging to two-year highs“.

But isn’t the US economy getting stronger & stronger? Perhaps not stronger but really strong, at least per NY Fed:

And isn’t inflation rearing or at least preparing to rear with PMIs? 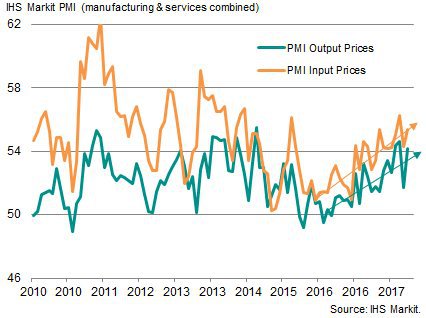 If this is really really true, then you would have to call the Treasury market stupid or downright idiotic. Who has EVER heard of inexorable flattening of all segments of the Treasury curve when inflation is rising fast?

Any who questions our “inexorable” adjective for flattening should visit @CharlieBilello to see his series of charts. If you visit his homepage, you may notice how often his chart-tweets about flattening refer to 2007-2008. We point that out because a smart strategist-investor highlighted both 1999 & 2007 in her tweet about lack of concern about the economy: 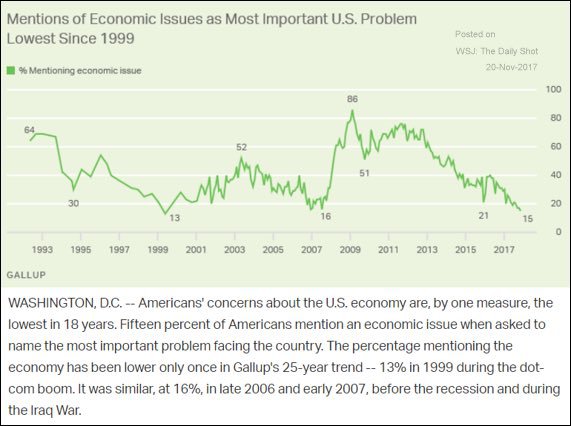 If concern about the economy is the lowest in 18 years, something else must be near or at all-time highs, right? 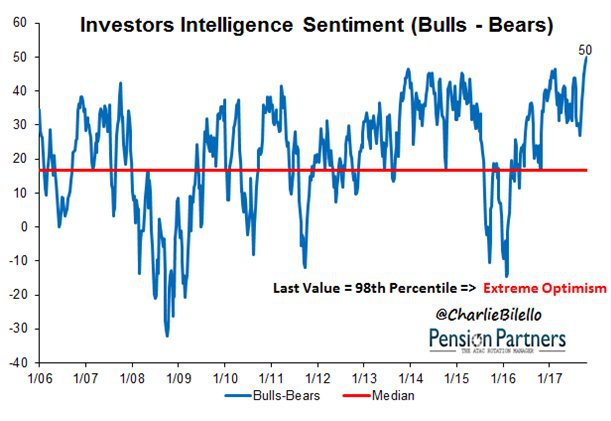 The gurus we featured last week proved correct in being bullish for this week. What are they saying now? One who called for IWM to hit $149.50 this week is now looking for IWM to go much higher by year-end: 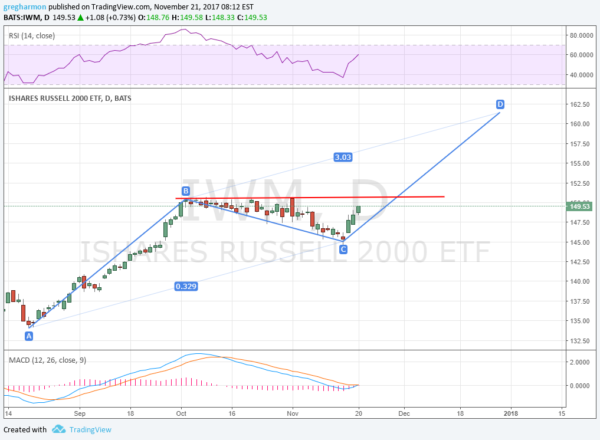 The guru who correctly called for $260 in SPY by Thanksgiving was less bullish about a leading sector:

Speaking of leadership, what’s a view on Amazon? 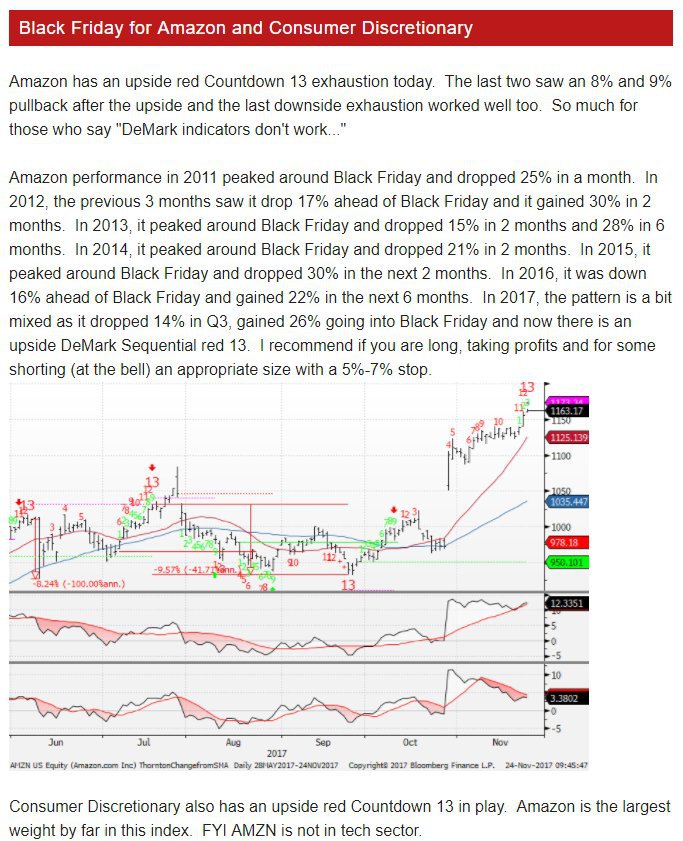 What about another beloved stock?

Shouldn’t the following have been the big story of the week? 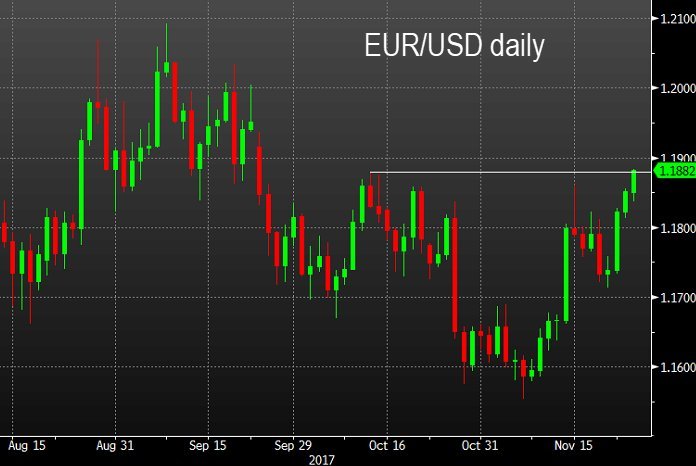 The US Dollar fell by about 1% this week, bringing its decline from start of 2017 to 10%. The reason this was not the biggest story was because this change in the Dollar’s trajectory didn’t explicitly impact Interest Rates or Gold.

Perhaps because of the falling Dollar, Emerging Markets beat the S&P badly with Brazil & India blowing it away. And materials stocks like iron ore, steel exploded higher.

But Gold acted poorly, down 50 bps. Even longer term bulls are beginning to get ready for a short opportunity. In his article titled A Final Move, Peter Brandt wrote: