That seemed to be the reaction of the stock market to the tax reform plan announced by Paul Ryan, Kevin Brady & their house gang. Remember Kevin O’Leary’s prediction that the S&P will rally 5-6% and Russell 2000 will rally 11-12% on tax reform because the tax cut would be better for domestic small cap companies? Well, just the opposite happened this week – Russell 2000 closed down some 80 bps while the Dow, S&P and Nasdaq closed at new all-time highs.

We hope the gang that hasn’t shot straight yet is correct in their arithmetic about the middle class receiving a tax cut. It was much easier to identify sections that will lose more than they gain. That may be why we saw a  loss of some stock market momentum this week.

The risk markets were not the only ones to ask is that all you got. The Bond market said that more forcefully to the economy and to the Yellen Fed. Treasury yields fell despite strong data until Friday and despite all the warnings of gurus. That action forced Rick Santelli to change his mind and proclaim after the weak 261,000 NFP – “… this now cements it; we are not going to go above 2.45% [on the 10-year yield]“.

How relentless was the action in long duration yields? Tuesday was the only day the 30-year yield rose. And that rise was 0.1 bps. Every other day the 30-year yield fell and closed the week down 11.7 bps to 2.81%, well below its 200-day moving average. So the big question is whether the much discussed breakout in yields was a false one?

Of course, the 2-year yield was impervious to all this and actually rose 2 bps on the week, the only major maturity to do so. That has more to do with Santelli’s description about the “need to get out of Dodge before … “. We do feel certain that Dr. Yellen will end her tenure as Fed Chair with a final rate hike of 25 bps. The big question is whether she also launches the QT at her last FOMC meeting as Chair.

S&P also mocked the bears with its own is that all you got. Because the discernible loss in momentum did not have any effect on the big averages. Still, the action made Lawrence McMillan of Option Strategist worry about the next few weeks:

But none of those worries are visible in the VIX which closed at 9.14. What happened the last time VIX closed below a key level?

2. Will the Real Economy stand up?

So if the Atlanta Fed proves correct, then the US economy will have delivered 2 straight quarters of 3% GDP growth followed by a 4% GDP growth quarter. How on earth can anyone match this growth to a 10-year yield of 2.33%?

But you do have low inflation and “really weak income growth“, to quote David Rosenberg. Is this weakness in income growth what both long duration Treasuries and continuously falling retail stocks are suggesting?

Unfortunately, we are not talking about America. It is what is now evident in India. According to an article in LiveMint on Thursday, November 1, big consumer companies in India have reported a surprise acceleration in sales volume: 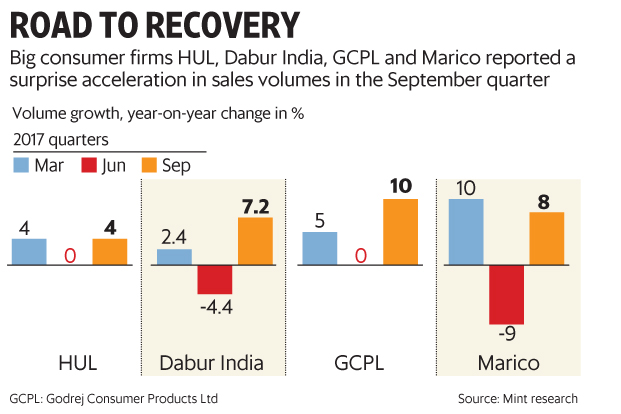 In the classic Buffet manner, the best long term plays on the Indian economy are consumer companies, especially food & household products companies. Traditional models have consistently failed to analyze the secular income growth & demand in rural India. Take for example, the simplest change that has been taking place in rural India for the past 3 years – thousands of villages that never had electric power are now getting 16-18 hours of electricity each day. Electricity has revolutionized lifestyles by allowing villagers to get smartphones & televisions. And that increases sales of branded consumer products almost exponentially.

What happens when the future becomes clearer and 4-7% unit volume growth becomes a reality? On Friday, November 2, Pepsico, Hershey and India’s ITC announced large investments in India’s food sector. ITC announced a $1.5 billion investment to set up 20 integrated food processing and logistics facilities. Pepsico reiterated its plan to invest $5 billion over the next five years with its partners. And Hershey, a relatively new entrant, said it is likely to invest USD 50 million in the next five years to grow and expand its presence in India.

No wonder INCO, a consumer sector ETF, typically outperforms INDA & INDY. Unfortunately, it is not an undiscovered story. Its Price/Book is a steep 5.44 & its trailing PE is 34. That is why a correction in Indian stocks usually proves to be a terrific opportunity.

Speaking of opportunity, take a look at a fantastic biscuit/cookie made by a 100% Indian company named Britania, the second largest holding (5.7%) in INCO. 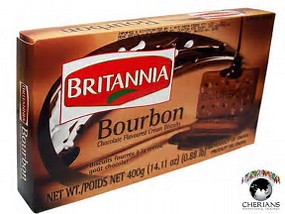 Most of individual readers of these articles may not be able to buy stock of Britania Industries. But they can sure taste Bourbons. That brings to mind what we wrote in a June 2008 article that was inspired by CNBC’s Mark Haines & his conversations about Oreos with his 2008 fellow anchors Erin Burnett & Melissa Lee.

Since we didn’t include the clip in that 2008 article, we do so below – A unique way of visiting the Louvre, Trocadero Gardens, Notre-Dame & Champs-Élysées with a semi-urban Indian admirer of an Indian lady living in London played, of course, by a Miss Universe winner.

What’s the American touch, you ask? The song is called Ticket to Hollywood. The young lady refuses to give him his winning ticket. How does he then retrieve it without, shall we say, reaching in? Watch the last 30 seconds of the clip.

Interested New Yorkers can buy a large box of Bourbons near Lexington & 28th Street for $1.99. To sell in India, the product has look great, taste delicious and be inexpensive, unless you aim for the sliver who buy expensive products to flaunt their money. For example, Apple’s iPhone will only be for this sliver. Of course, even a sliver of India’s buyers is a large number.