Nothing is as seared in our modern memory as the disastrous chaos in Iraq after the 2003 invasion by President George W. Bush. After the glow of that stunning shock & awe of destruction of the Iraqi army in one week, it all went downhill into a violent abyss until the Surge managed by General Petraeus. The steadfastness of President Bush in 2006 & his launch of the Surge was his finest hour in our opinion.

But stability in Iraq from that Surge did not fix the biggest problem the invasion of Iraq had created. History teaches us that balance of power is extraordinarily important for stability & even peace. Destroying a long established balance of power creates a wave that washes over that region & creates a totally different landscape. Witness Iran.

Iran became a dedicated enemy of America in 1979 after the Ayatollah-led regime took over. But Iran could do very little to become powerful in its own neighborhood, let alone challenge America. The reason was Saddam Hussein’s Iraq was directly between Iran and the rest of the Middle East. Saddam invaded Iran & fought a useless war for 8 years with Iran. Even after the defeat of Saddam Hussein by the Senior Bush coalition in 1990, Saddam’s Iraq remained a wall between Iran & the rest of the Middle East.

Until 2003. When President W. Bush overthrew Saddam, he destroyed the balance of power between Iraq & Iran. Not only was the balance destroyed but Iraq slowly became a suzerain of Iran. Then came ISIS into Iraq. The Iraqi government survived only because Iran entered the conflict with its Iranian backed Shiite militias. America had no choice but to support these Shiite militias with air power because ISIS was the greater threat.

After the victory over ISIS in Iraq, Iranian forces & militias entered the war in Syria via Iraq. With the help of Iranian dominated Hezbollah from Lebanon & via Russian air power, Iran won the battle in Syria. Now Assad is but a semi vassal of Iran. Iran is now a hegemon in the northern belt of the Persian Gulf, from Iran across Iraq into Syria & then Lebanon via Hezbollah. The Obama Administration ended up acknowledging this Iranian hegemony by signing the US-Iran Nuclear Deal.

This Iranian hegemony is simply unacceptable to America. Restoring the old balance of power is now a major imperative for America. That is the principal reason for the decision of President Trump to walk away from the Iran Nuke deal & for imposition of intense sanctions on Iran. The goal is to do such damage to the Iranian economy that Iran agrees to withdraw from Syria.

Life is sometimes stranger than fiction. In that spirit, an old & forgotten enemy of America rose like Lazarus to triumph this week in Iraq, an old enemy who could actually prove to be an ally in America’s mission to push back Iran into its place. 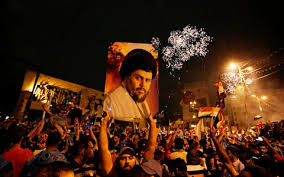 This week, Muqtada Al-Sadr came from nowhere to “win” the election in Iraq. He was dubbed “The Most Dangerous Man in Iraq” in 2006 because of the part his Mahdi army played in the Shia-Sunni carnage. He was despised by virtually every one in that Iraq. The US regarded him as a dangerous enemy, Iran disliked him and even the Iraqi Ayatollahs thought of him as a hooligan living off his illustrious & widely respected father’s name.

Al-Sadr went away during the Surge in 2008 and he as been virtually invisible for the past 10 years. Until this week, when his party won the largest number of votes & seats in last week’s election.

What happened takes us back to the momentous decision by President George W. Bush. That decision was to make Iraq into an electocracy – a system where the Government is appointed via elections. It is this decision that kept 75% of Iraq in relative peace as violence gripped so much of the Middle East during the inferno of the “Arab Spring”. It is this decision that enabled Al-Sadr to become the most powerful man in Iraq.

But during that relative peace, the condition of the ordinary Iraqis kept worsening. Corruption was rampant and the Government leaders were only intent on looting the country’s resources for their personal benefit. As long as the leadership allowed America to run anti-ISIS operations and allowed Iran free access, the leadership was free to do what they like.

Muqtada Al-Sadr was the rare Iraqi leader, now “politician”, who recognized this rage among the people. He recognized the need to get technical experts in his party including some communists. He went & got the blessings of Saudi Arabia & UAE, thus making him more acceptable to the Sunni minority. Amazingly, he called on Iran to withdraw from Iraq, a complete no-no for any Iraqi leader. He basically ran on Iraq for Iraqis platform and promised a non-corrupt government run by technocrats. And above all, he refused to become the Prime Minister, which was exceedingly smart.

This victory of Al-Sadr is a major setback for Iran. Before the election, “Tehran publicly stated it would not allow Sadr’s bloc to govern close ally Iraq ... “. Iran’s choice was the bloc led by Hadi al-Amiri, who leads an umbrella of Iranian-backed militias. The Amiri group came in second.

Winning an election is one thing, governing is another. The central reality in Iraq is the conflict between America and Iran. No one can run an effective government if either America or Iran explicitly oppose them with covert actions. Al-Sadr is showing that he gets it. On Saturday, he met current Iraqi Prime Minister Haidar al-Abadi and said in his press conference: 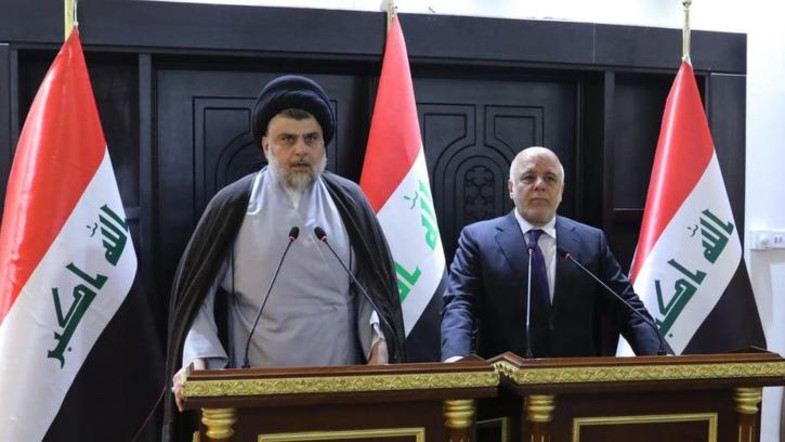 Prime Minister Abadi showed he had received the message of the election when he promised:

Al-Sadr is showing his diplomatic & coalition protecting skills already. His first & unannounced visit was reportedly to Iran where we presume he soothed panicky nerves. Al-Sadr is already supported by Saudi Crown Prince Mohammad Bin Salman and UAE, both major Arab voices in the Trump Administration.

He has already said that he wants US troops in stay in Iraq and train the Iraqi military. His choice of current prime minister Abadi as a coalition partner has to be soothing to American military. While there are many in the US Military who hate & despise him for his actions from 2004-2006, they also recognize Al-Sadr as the one man who can reduce Iranian influence in Iraq.

Al-Sadr’s Shiite credentials are second to none in Iraq. He is the son of the deeply respected cleric, the late Grand Ayatollah Mohammad Mohammad Sadeq al-Sadr, who was killed by Saddam Hussein. He is also the son-in-law of Grand Ayatollah Muhammad Baqir al-Sadr. Both were revered for their concern for the poor.

He, like many Iraqi Shia leaders, believes that Iraq is the true center of Shia Islam and not Iran. The Iraqi cities of Karbala & Najaf are as revered in Shia Islam as Mecca & Medina are in Sunni Islam. This provides a religious basis for Al-Sadr to maintain a distinct & equal identity from Iran.

The bottom line for the upcoming conflict is simple – Al-Sadr cannot succeed without making Iraq at least somewhat independent from Iran while Iran’s paramount strategic objective is to keep Iraq a semi-vassal state.

It is too early to say how all this will play out. But there is no doubt that Al-Sadr’s rise is the best opportunity for the rest of the world to draw Iraq out of Iran’s grip.

If Al-Sadr is able to do that, then that would also be President Bush’s revenge against Iran. His imposition of an electocracy is what enabled Al-Sadr to win & make Iraq independent again.