Last week, we described President Trump as the player in the zone; not just any player but a player who has always won with a weaker hand against much stronger teams. When such a player finally gets the strongest hand of all, he becomes very hard to fight. That is what we saw this week.

Remember how US Presidents were kinda captive to OPEC? Not President Trump in 2018. Partly because US is now almost as large a producer of oil as Saudi Arabia. But even more so because of the special relationship he has built with the Crown Prince of Saudi Arabia & UAE. Unlike the dumb articles in US media that portrayed him as dependent on MBS of Saudi Arabia, the actual dependence runs the other way, both because of his actions against Iran but also because MBS is critically dependent on President Trump’s support.

Any one who doubts that should hear Helima Croft of RBC Capital Markets describe “President Trump as the key or only consumer” for OPEC. She also added “Trump’s intervention in April very much changed the direction of OPEC’s policymaking“.

That brings us to Europe and what Jim Cramer had been told 2 weeks ago by a source in Washington DC – that “President Trump really wants to shut down the import of German luxury cars into America“. We had believed Cramer’s source at that time. So had the European markets. Then on Friday morning, we all saw the tweet:

As Lisa Abramowitz of Bloomberg showed on Friday, European markets had already figured this out: 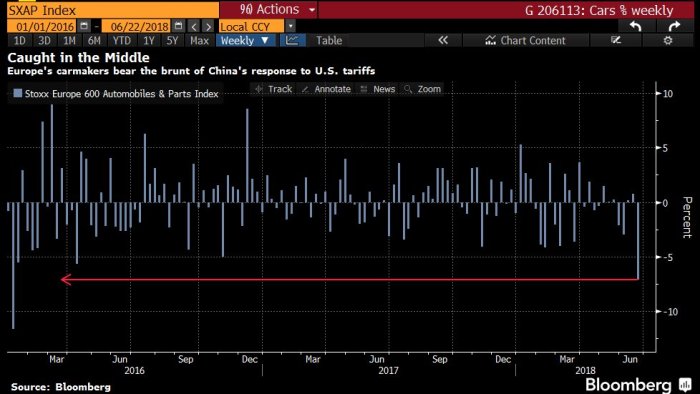 As we all understand, the bulk of European cars imported into America are German – BMW, Mercedes, Audi & Volkswagen. So this is a weapon pointed directly at Germany and not at France, Belgium, Austria, Netherlands, Spain. As we wrote two weeks ago, without ending or severely curtailing Germany’s mercantilism Europe’s economic health will not be restored and America’s trade deficit with EU will not get reduced. 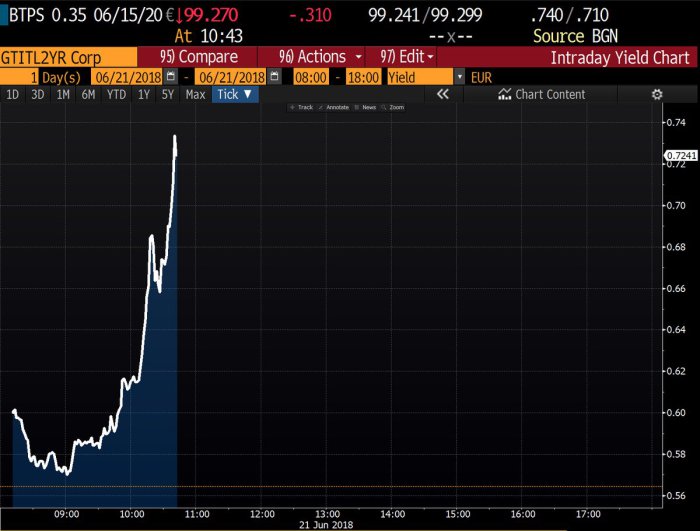 Italy is in a virtual state of economic & nationalistic war against Germany; Poland, Hungary & other Eastern European states want stability but not the dominance of Germany. If you think about it, this is similar to 1930s and other periods in German history when a united Germany was simply too strong & dominant for the good of Europe as a whole. And that is the true aim of President Trump – to reduce the power of Germany and make European countries more democratic & nationalistic.

The timing couldn’t be better given the already large divergence between Europe and America. 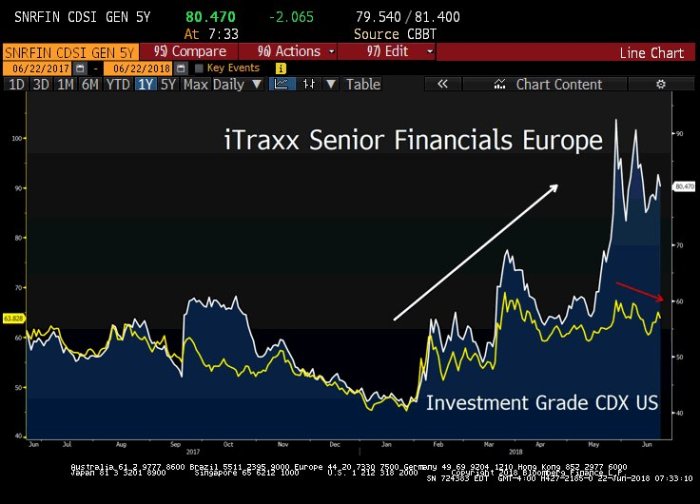 Political stability in Germany depends entirely on the strength of its manufacturing sector and that sector is critically dependent on the large automobile companies. A 20% tariff could prove devastating to German luxury car makers and so they are putting enormous pressures on German Government to get EU to drop tariffs on US cars exported into Europe.

But that is merely the first step. Remember the last sentence of President Trump’s tweet – “Build them here!” So this battle against Germany is really to force a Make in America if they want to Sell in America, drive. Now you understand why capital is flowing from the rest of the world into America.

Wait! 1930s America had two big mercantile adversaries – Germany & Japan. So what is today’s equivalent of 1930s Japan? Another 5-letter word – China. The drive to contain China is a much larger, deeper and more momentous one than the conflict with Germany & EU. President Trump & his administration believe deeply that China represents a “major challenge” to the status of America in the world and no time can be lost in taking corrective measures. We have already seen clear statements from Secretary of State Mattis about a greater naval presence in the South China Sea, a stand that cannot but create intense long term friction between US & China.

That brings us to economic tariffs & restructuring demands on China, some which China would find very hard to accept. We think President Trump & his team are convinced that China has a much weaker hand and they plan to keep up the pressure. That ties in with the mid-term elections in November 2018. So we do not expect any reduction in rhetoric or step by step actions against China (& Europe & NAFTA) between now and November 2018.

That could be a prescription for volatility; so much so that Jim Cramer began his Mad Money show on Friday with “You Ain’t Seen Nothing Yet“, a line that CNBC webmasters seem to have skipped in the clip below:

“Raise some cash; you will thank me later” – was Cramer’s concluding line. The first part of the line is vintage Cramer, but the second part is vintage Monk, the diffident TV detective Adrian Monk. Was Cramer trying to suggest that there is an inner Monk in him? After all, he has often explicitly alluded to the inner Gandhi inside him. 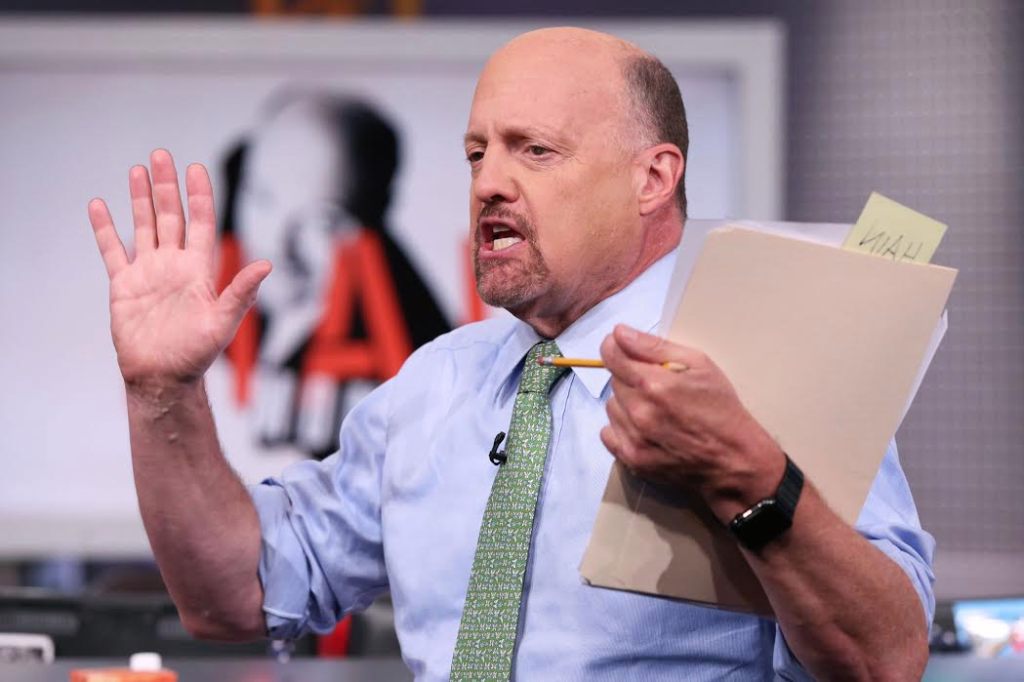 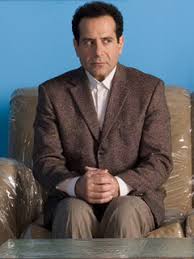 Given that credit is weakening in Europe & economies are getting buffeted by trade & political tensions, how would you expect German yields to behave? Like they did this week – German 10-yr yield fell by 7.5 bps on the week to 33 bps and German 2 year yield fell by 5 bps to minus 69 bps.

Listen to Rick Rieder of BlackRock explain the attractiveness of the short end and the demand at the long end, both being influenced by Europe slowing down:

We are somewhat disappointed in the above clip. Mr. Rieder was a guest host for an entire hour and all CNBC captured was a 3 minute conversation, half of which was taken up by comments of CNBC anchors, Joe Kernen & Becky Quick. But we used it because it did capture the bullet points of Mr. Rieder – Draghi has essentially put a cap on developed market rates; the short end is attractive & there is incessant demand at the long end of the Treasury curve.

Keith McCullough of Hedgeye made a technical point by saying the “market is signaling a “lower-high” for the 10-year yield“:

For a completely different view of Europe and it’s impact on the U.S. Dollar, watch Morgan Stanley’s Lisa Shallet below:

Bloomberg shows, especially Surveillance, tend to be more discussion-oriented but, for some unfathomable reason, the clips that capture the discussion tend to be very limited in scope, like the clip above.

Positioning also tends to support the case for at least a short term pause/decline in the U.S. Dollar:

If U.S. Dollar is peaking or about to decline and if U.S. rates are stable or declining somewhat, then EM local currency bonds should do well, shouldn’t they? Goldman said yes on Friday, according to a Bloomberg article:

The big divergence of 2018 got wider this week, with Russell 2000 outperforming Dow Jones ytd by almost 10% as the simple chart below shows:

The Russell 2000 has already corrected this to a small extent over the last 2 days. Will that continue?

Actually, all the major indices are looking as if they need some reset: 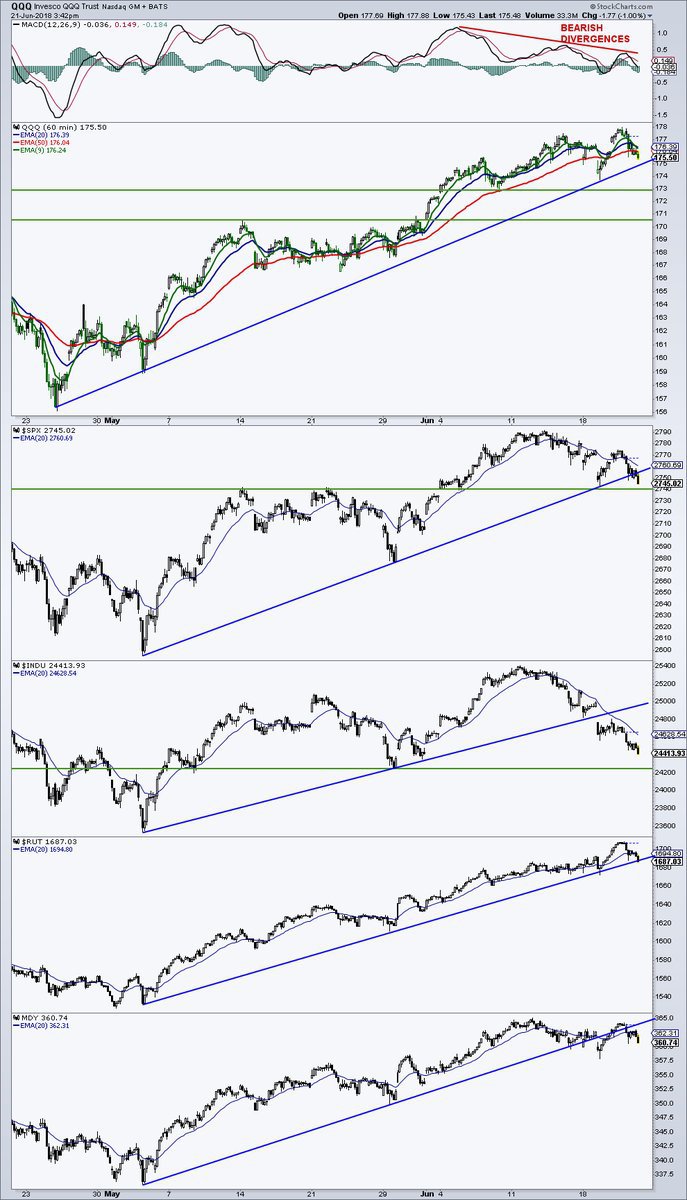 And the Newsletters indicator is also signaling need for some rest: 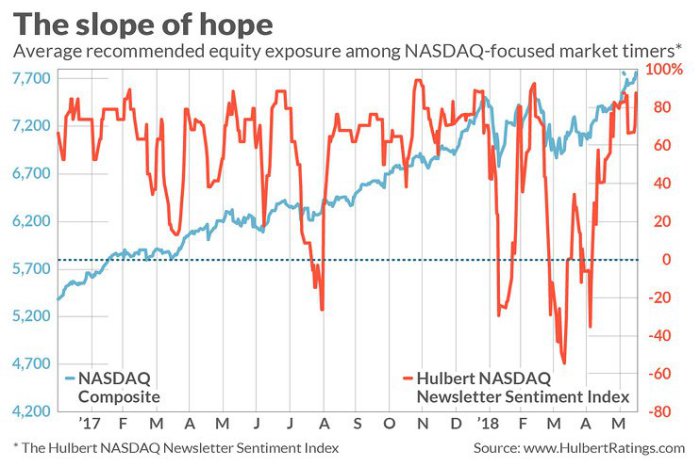 Can a “No” answer be bullish or at least non-bearish?

Isn’t next week a month-end week?

How about a Buy signal from a major firm? 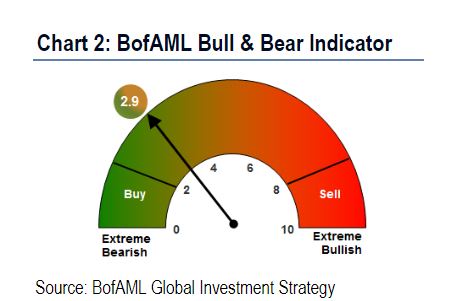 Goldman may see a green light in EM debt but EM stocks don’t see any yet. Brazil kept sinking with the rest of EM, down 3% on the week on par with EEM also down 3%. What about India, another market we had featured last week?

Since EM stocks begin with EM FX, the big question is what about the Indian Rupee? Both Barclays & J.C. Parets answered this question.

J.C. Parets comes to the same level by looking at the chart: