said CNBC’s Bob Pisani at the close on Friday. He was not far off the mark. Doesn’t that mean buyers are overwhelming sellers?

What might have given buyers the confidence to roll over sellers?

Any prior instances with a similar condition? 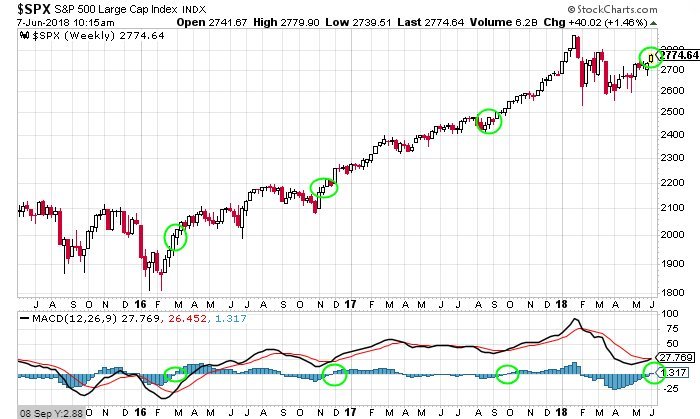 First the Russell 2000 led the broad indices; then Nasdaq 100 took over the lead while the S&P kept behind. Can a rally be justified when the big champ falters behind? 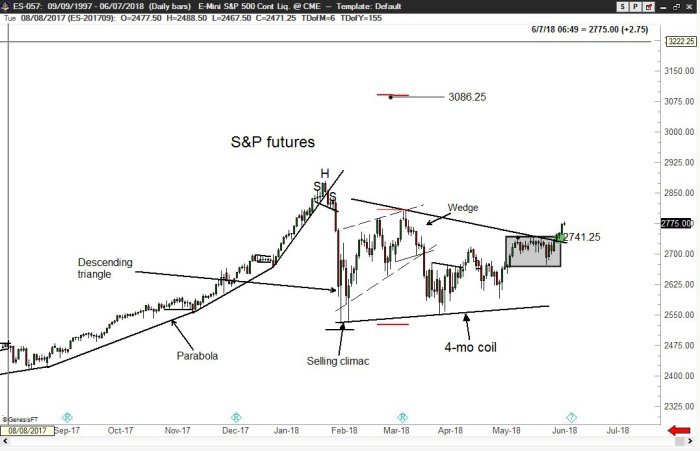 What about fundamentals? They suggest S&P target of 3,200 to Tony Dwyer of Cannacord Genuity who front ran our question back on Monday, June 4 on CNBC FM. He said the market has got its mojo back; sentiment among newsletters is only 50% and confidence in economy of of consumers & CEOs is high. He raised his S&P earnings number to $160 and proclaimed that earnings were blowing away expectations.

Marko Kolanovic of JP Morgan went a step further and used the MU word. Not Micron but Melt Up. His caveat was that the S&P is up 5-6% in the last month and that pace cannot be maintained. But quiet weeks ahead will actually create a melt up in stocks as volatility will be contained & dealer positions remain suppressed. Unlike Dwyer, Kolanovic didn’t raise targets but simply said the S&P will go to new highs this year.

His most interesting call was to begin legging into Emerging Markets. Part of his reason was the wide performance gap between US stocks & EM stocks over the past 10 years. How wide is that gap? Since a picture is worth much more, 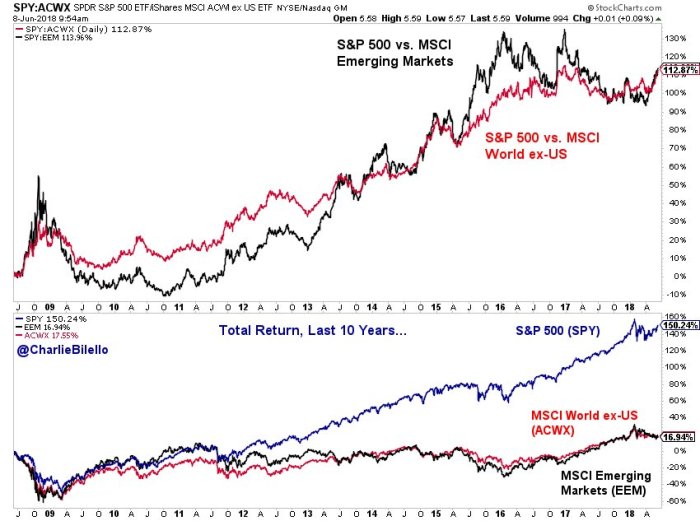 On second thoughts, it may be better to hear from Kolanovic directly:

Does the data match this optimism?

Wait a minute. Such strength in economic data usually results in Treasury rates rising across the curve and prompts the Fed to raise rates with greater urgency. But look what happened on Tuesday, June 5, the day the above data was released?

Let us take it from top down: 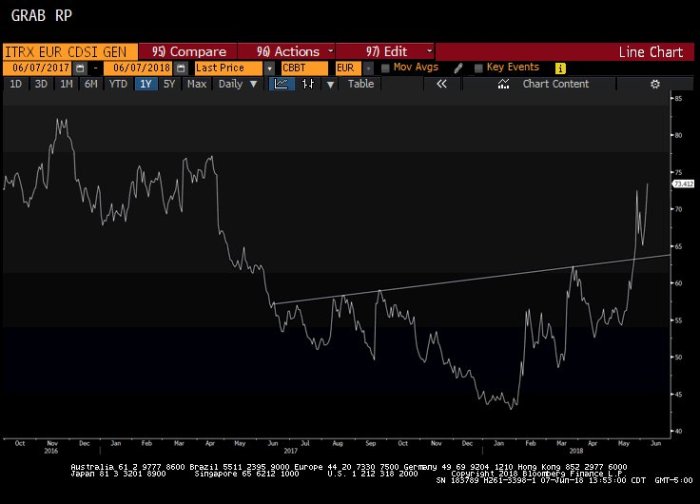 But isn’t Deutsche Bank much smaller now relative to Germany than it was 10 years ago? 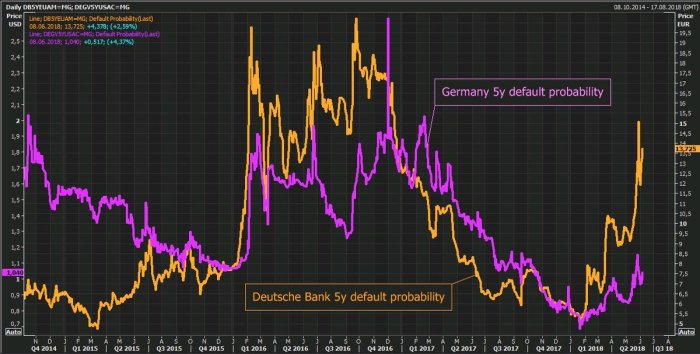 That brings up the really big trade war that is bubbling underneath – a war that might persuade Italy to introduce a different currency for use within Italy while staying in the European Monetary Union & keeping the Euro as external currency. Such a new & most certainly much weaker intra-Italy currency would cause a big contraction in Germany’s exports to Italy.

That in turn has prompted the Bank of Italy to warn the Italian Government against such adventurism: 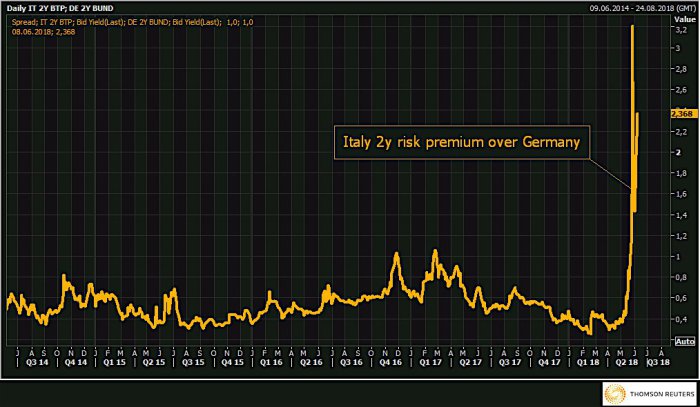 With Conte deliberately poking Merkel in the face by agreeing with President Trump about inviting Russia back into G-7, is there any doubt left about the tussle between Italy & Merkel-obedient EU?

That brings up the possibility of Draghi being more hawkish next Thursday in a cut off his nose to spite Italy action. Since major central banks do consult with each other, one assumes Fed Chairman Powell would know by Wednesday what Draghi plans to do on Thursday morning. So would Chairman Powell get more hawkish ahead of Draghi or play dovish to let Draghi have his day?

That is not the only reason for Chairman Powell to talk dovishly on Wednesday. EM central banks, including that of healthy growing India, are warning the Fed that the double whammy of Fed contracting its balance sheet & the Treasury increasing its debt issuance is creating a dollar liquidity crisis. Look how an eloquent man expressed the same appeal & added a chart: 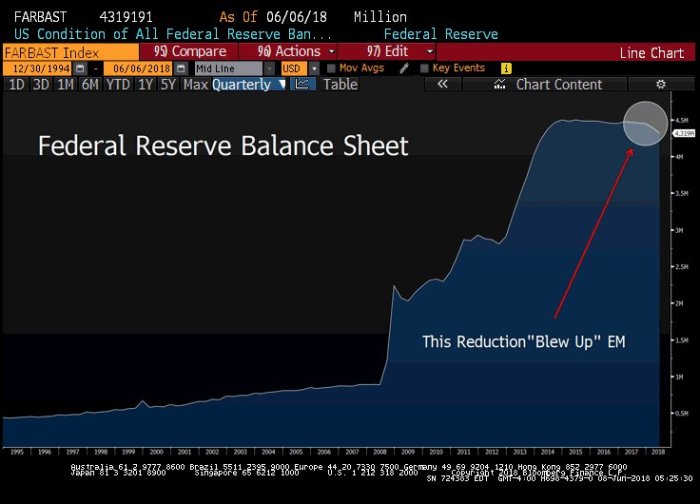 But isn’t reducing the size of the Fed’s balance sheet now a sacred obligation for Chairman Powell and the FOMC? How will they prepare for rebuilding it to protect against a US downturn without contracting it now? So what measures can Chairman Powell use to reduce the panic in EM (assuming he cares)? Talk dovishly & not explicitly reaffirm 3 more rate hikes this year?

And why should he do that? Because otherwise he will see the US yield curve flatten to an extent he has sworn to not tolerate. And perhaps because, a hawkish Fed & a hawkish Draghi would put enormous pressure on a major central bank that just saw its country’s GDP go negative. Rick Santelli explains it much better than we could:

The most important insight about Germany came from Jim Cramer this week. He told his co-anchor David Faber that a source in Washington had told him that President Trump really wants to shut down the import of German luxury cars into America. We believe Cramer’s source.

This is tantamount to waging war on Germany which is the world’s number 1 mercantile economy. Without ending that mercantilism or at least severely curtailing it, Europe will not regain its health & US will not cut its trade deficit with Germany. We would not be surprised to hear that the populist Italian Government has been given at least verbal support by President Trump in its fight against Germany-EU (see last week’s Bannon-Zakaria interview). Read President Trump’s statement about including Russia in a G8 and its swift endorsement by Italy in the above Trump-Germany conflict. Do you really think the two had nothing to do with each other? And Germany has a weak hand right now: 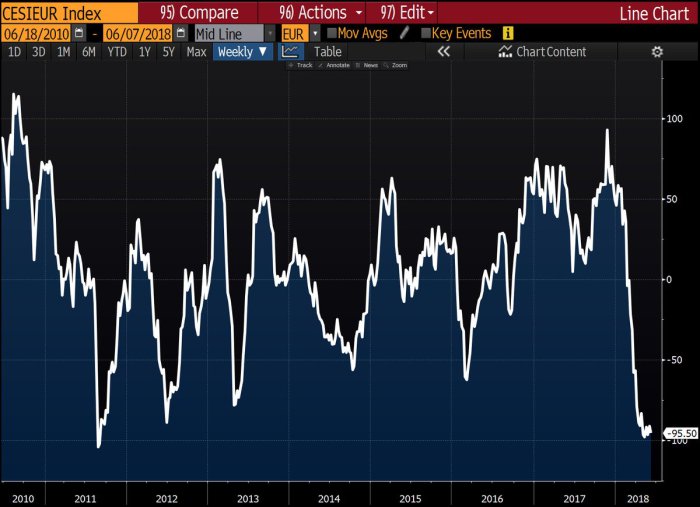 The more scary thought is the Hedgeye statement that #EuropeSlowing is “just getting started“. Now you get why we call Draghi’s hawkish step a cut off Germany’s nose to spite Italy’s face?

But you know who is the stupidest leader in the G7? If you were Theresa May of UK, wouldn’t you use this Italy mess to work with President Trump to challenge Germany & get a better deal for Brexit? Instead, what has she done?

Contrast that with what Boris Johnson, May’s Foreign Secretary, said to  members of Conservative Way Forward – a Thatcherite campaign group:

This is the sort of stuff politicians say before they put a dagger in their PM’s back. Imagine Boris Johnson as PM of UK handling Brexit as an ally of President Trump and Italy’s Matteo Salvini demanding & implementing populist measures in opposition to EU-Merkel – all they might need is a mistake by Draghi that blows up European Bonds & crushes Deutsche Bank.

We, of course, don’t know much but we do feel there is lot more going on underneath. Man, we can’t wait for next week.

Fed Chairman Powell may need to cool down his hawkishness for purely local US concerns as well. 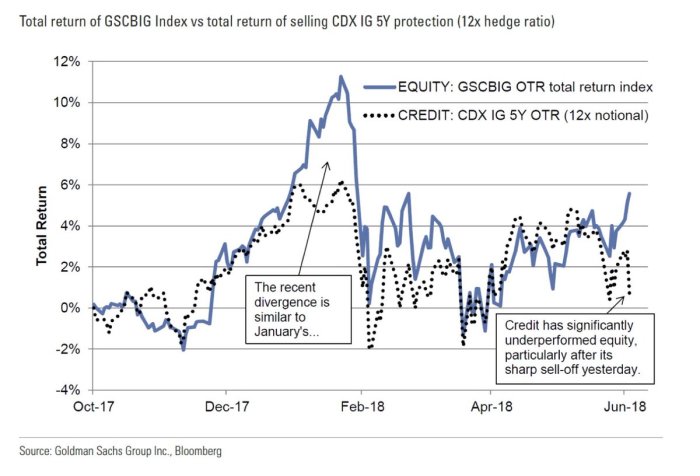 With all this going on, the Treasury yield curve rose 2-4 bps this week. It will be interesting to see how Treasury yields behave next week on Powell-Draghi-Kuroda. But some are placing serious bets already:

That brings up back to :

Given all we discussed above, why would any one even venture to get into EM equities?

Then you have the capitulation-expert getting sarcastic & mega bold:

Meaning things look so bad that they actually may be good to buy. That is also what Marko Kolanovic said in his clip above – that there are both +ve & -ve risks but the payoff from +ve risk may be bigger. Note that the 2-year yields in Turkey & Brazil rose by over 100 bps this week.

Look what Kenneth Rogoff of Harvard wrote in Project Syndicate:

Amazon announced this week that they are ready to invest an additional $2 billion in Amazon India, partly in response to Walmart’s acquisition of Flipkart.

Speaking of India, we just have to, despite our grave chagrin, discuss a storm du jour in India, a storm that people are talking about with greater fervor than the monsoon or the Indian 10-year yield breaking above 8%.

Caution – Do Not Read Further if you are sensitive or averse to discussion about certain below the belt behavior.

We have been meaning to feature the tweet below since we saw it first on May 9, 2018. But we refrained because May 28, 2018 was also the real Memorial Day. Not only have two weeks elapsed but this topic became a huge point of trolling in India this week.

We don’t know Ms. Aparna Jain. We saw this tweet because it was retweeted by another Indian “journalist”. According to Wikipedia, this annual national event, now international event, was first launched in 1995 to protest the firing of Surgeon General Joycelyn Elders by President Bill Clinton.

The heat against Ms. Bhaskar got so intense that, in typical Indian fashion, her mother had to publicly intervene. Her mother, Ira Bhaskar, holds a Ph.D from Tisch School of Arts in New York and now teaches Cinema Studies at New Delhi’s Jawaharlal Nehru University.

The controversy has done wonders for the film at the Box Office, with it running in the top 10 in Britain, Australia and New Zealand, according to South China Morning Post.It remains to be seen whether this film & the controversy does anything to revive the moribund career of Ms. Bhaskar.

The reality is that Indian society is in the midst of a huge sexual revolution in which, thanks to the morning-after contraceptive pill & higher disposable incomes, women are able to engage in as much sex as they want. In contrast, the traditional section of society, both men & women, are reacting in horror. They know that sex has always been a big factor in Indian society.  They merely mind it being discussed publicly.

Also they are concerned about peer pressure exerted on young girls and the lack of adequate protection. Exhortations to young women by other women like “chad ja” or “climb on him” are now commonplace in Bollywood films. No wonder abortions among 13-15 year old girls rose 67% year/year in 2017.

Bollywood now routinely shows women executives acting as honey traps against business competition. Witness the song Tu Isak Mera (“you are my love“) from Hate Story 3 after the number 2 executive from one company joins a competitor & meets their CEO. The song is about her day dream and does not represent actual action. This is one videoclip we would prefer to not include here even though YouTube has not classified it as restricted for mature audiences.

Thanks perhaps to her role in Hate Story 3, Daisy Shah is now featured in next week’s big budget film Race 3. We expect Race 3 to be bold but perhaps lacking in semi-virginal innocence of Katrina Kaif in the song from first Race film that said “Zara Zara ( a little bit) Touch me, touch me, touch me; Zara Zara Kiss me, kiss me, kiss me”. Katrina plays a secretary who is trying to woo her boss, a young owner who owns race horses and race cars.

The Government, run mainly by old men, has reacted by enforcing draconian anti-men laws because, in their view, Indian women are the most virtuous in the world and would never engage in such acts unless somehow tricked by men. Ergo the Gender Apartheid against men in India.

Thank God we live in America. That lets us watch the intensity of this debate in India without being involved. And we can occasionally watch simple family shows like Two & Half Men reruns.