thus spake Rick Santelli.  Santelli’s complete sentence described Fed Chairman Jay Powell as “best communicator I have seen running the Fed & I have been monitoring it since 1978“. We concur and offer a simplistic explanation. Jay Powell is the only investor to have run the Fed since we began watching the Fed. And we have always preferred doers over non-doer analyzers. As Rick Santelli & Vincent Reinhart said in their clip below, Chairman Powell is far more comfortable with markets setting prices than Yellen or her predecessors. That only comes from experience in doing.

In their conversation about Draghi’s comments on Thursday morning, Santelli gave the trader’s summary:

Powell will raise about 3-4 times till July 1, 2019 while Draghi will not raise at all since then. So how should the 5-year US rates & 5-year Bund rates behave? Exactly as they have: 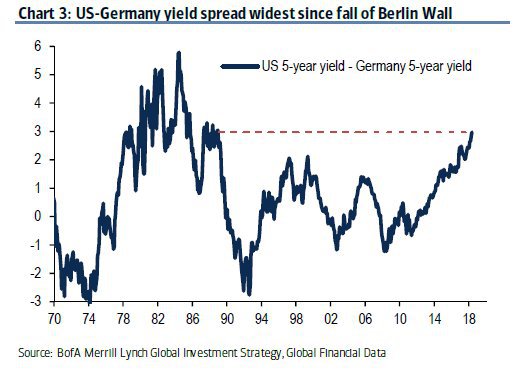 There is also a deeper story here. QE was an invention of Bernanke who designed it to fit the US economy, US monetary structure & US Treasury market. When copied blindly for Europe & Japan, it didn’t work so well. The only market where it worked somewhat was the other Anglo economy – UK. Unfortunately, that market doesn’t count for much these days. 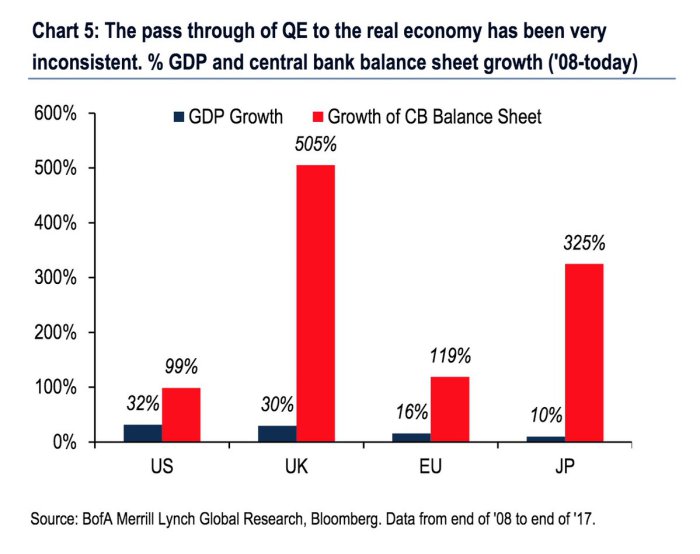 So you have hardly any inflation in EU and you have no inflation at all in Japan. Isn’t that terrific for America? 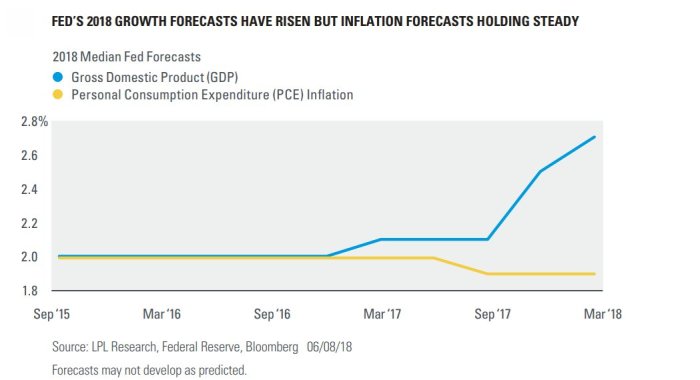 As, Jim Paulsen of Leuthold Group said on Friday, while Real Q2 GDP would come in 4.5%, the second half might decelerate to 2.5%. In other words, Q2 GDP could be the peak quarter for 2018. Add to that low inflation being imported from EU, Japan & even from slowing China, what should you get? What Hedgeye termed on Friday as “lower high for 10-year yield, CRB & Oil“.

The Treasury yield curve flattened hard this week with 10-30 year rates falling and 2-5 year rates rising. The 2-3 year curve rose 5 bps + in yield while the 30-year yield fell by 3.9 bps and the 10-year yield fell by 1.6 bps. The 30-5 year spread closed below 25 bps and the 30-10 year spread closed at 12 bps. The latter is the best indicator of future inflation expectations.

How does a macro guy express this? 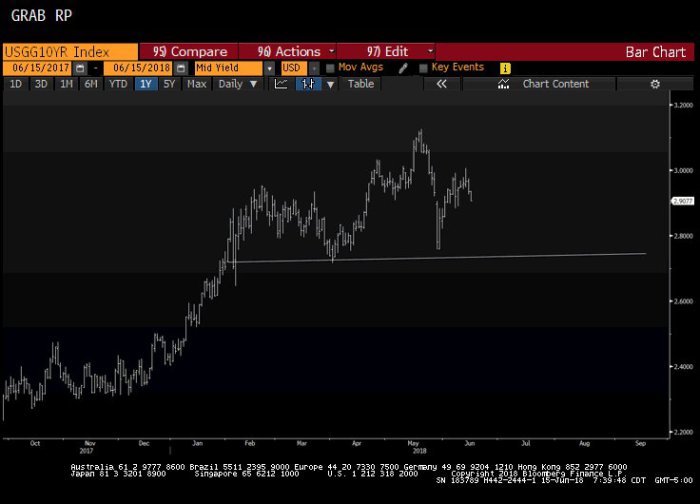 The US high yield ETFs, HYG & JNK, rallied by about 55 bps this week. What is the message for High Yield from comparisons with other asset classes? Mixed seems to be the answer: 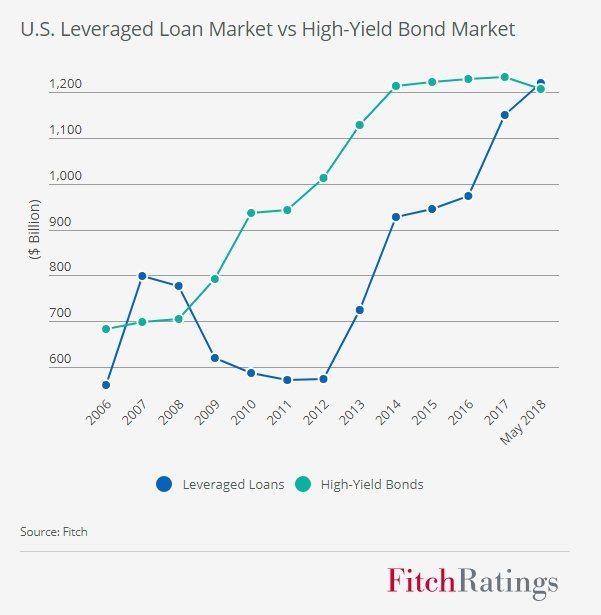 What does this say for EM stocks? More on that later.

Last Friday, the stock market “seemed unstoppable” to some and the gurus we featured were almost uniformly positive. The story is different for this Friday. After a churning week in which NDX, Russell 2000 & Transports closed up about 1%, the Dow closed down 90 bps and the S&P 500 was flat, most of the commentary we find is negative to cautiously optimistic.

The stock market, in our view, survived a more hawkish than expected Powell, a dovish Draghi & same as old Kuroda. It also survived its biggest threat on Friday morning. The Dow was down 200 points pre-open apparently because of tariffs on $50 Billion of Chinese exports by President Trump.  This is probably the biggest non-monetary-policy threat to the stock market. And we could see a repeat of Friday morning’s decline on Monday morning if China retaliates hard over the weekend.

Our own view is that a China-US trade war is likely to be more noise than anything else. The Chinese could put on a show for domestic consumption but they know the reality:

Shanghai market closed at a new 52-week low on Friday. The YTD performance tells the same story, especially since mid-April:

With this reality, we are persuaded that at least a portion of Friday morning’s decline was due to Option Expiration shenanigans. In any case, GOOGL was only down 7 bps on Friday, Netflix was only down 23 bps while Amazon & FB were down a hard 48 bps. And, wonder of wonders, Brazil’s EWZ actually closed up 1% on Friday.

Forget simpletons like us. How does an experienced steady hand express his view?

Tom McClellan drew a bullish message from the Treasury-Bund Spread on Thursday: 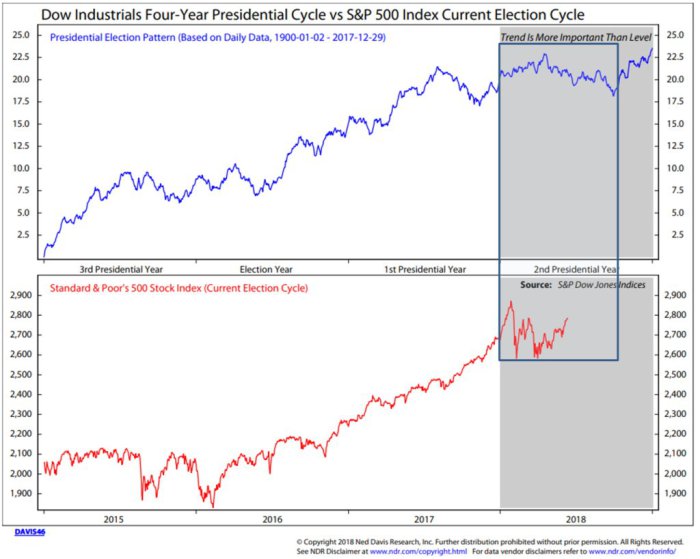 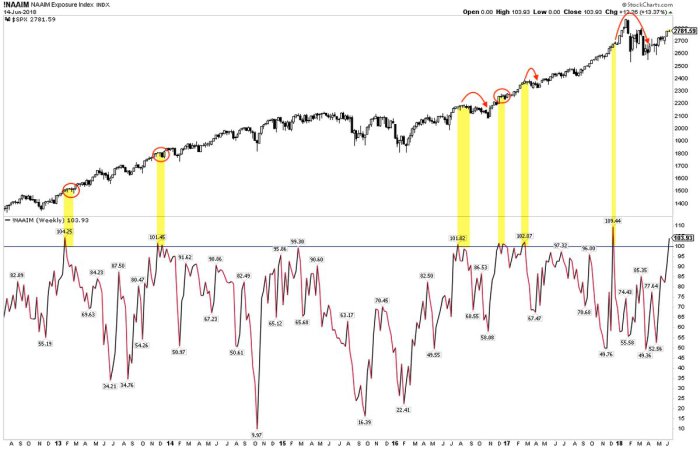 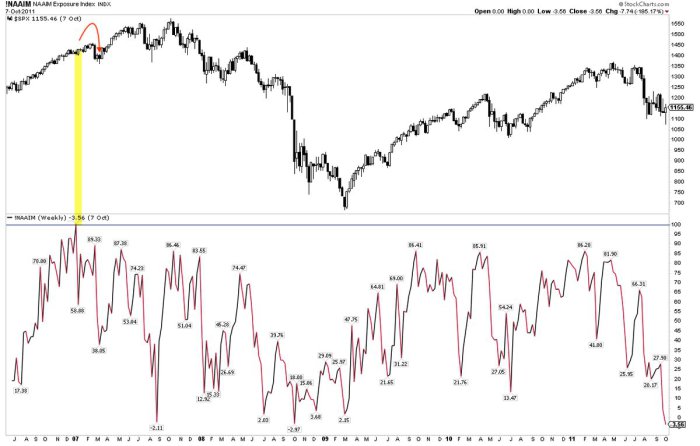 Does all this lead to exhaustion?

And what could be a target on the downside? 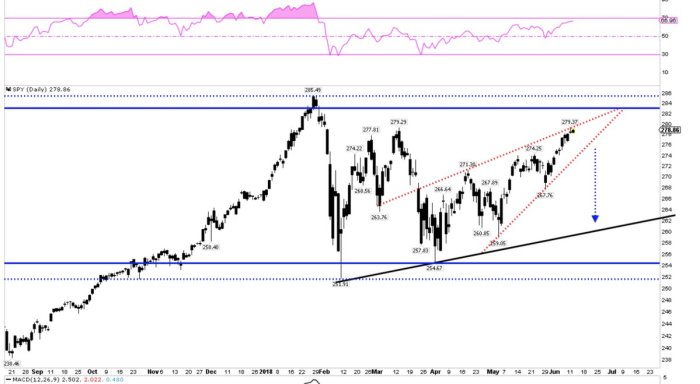 What about a sector buy? Greg Harmon of Dragonfly capital wrote about Consumer Staples: 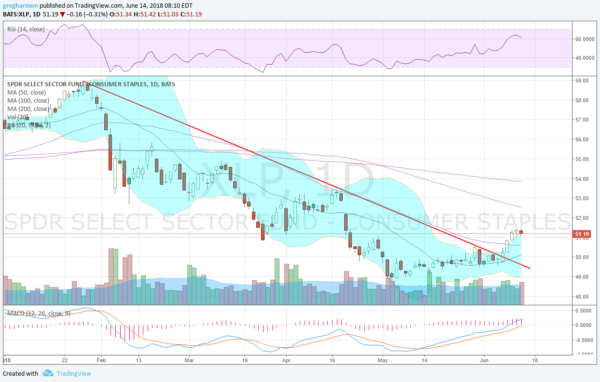 If an ignored sector like Consumer Staples has hope, how about a truly discarded asset class?

Is there a class as despised & discarded as EM? Just look at EM currencies: 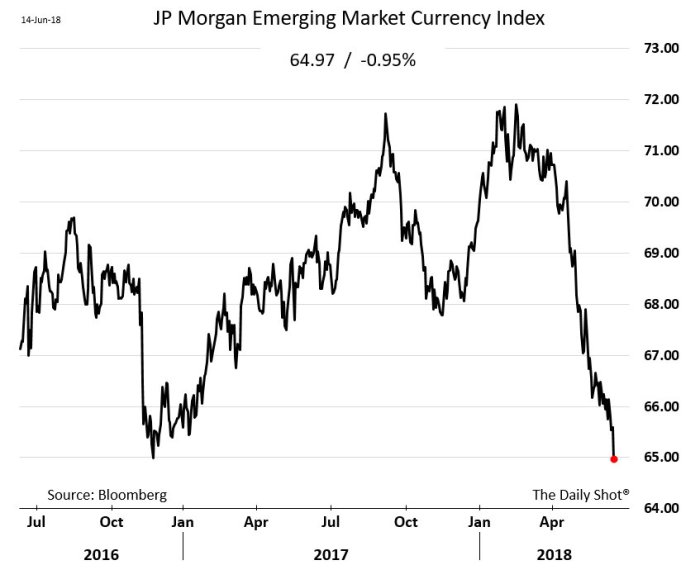 Take a closer look and ask yourselves – what if EM FX bounces from here? Will we have a double bottom? If you are brave enough to dabble, where might you get a big bang? 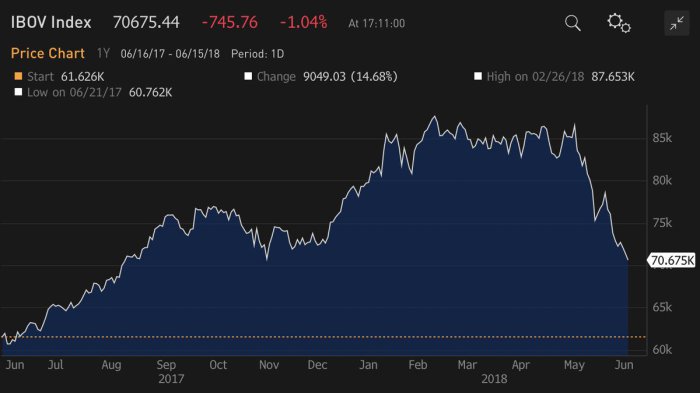 Look again and you will notice that the index is just above the Nov 2017 low from where it bounced into February. What if Brazil bounces from here? Would it be a joint bounce in Brazil’s currency & stocks? We have heard of faint hearts never winning ladies but what about market Goddesses? Do they favor crazy minds that might jump into Brazilian stocks? Only perhaps if they jump in with very hard & tight stops. After all, we presume market Goddesses only help those who help themselves. Of course, those who jumped into EWZ on Friday morning are already up 1%.

Now let us to go a market as unlike Brazil as possible within EM. And look at the chart of a stock in that market, courtesy of J.C.Parets, a stock that is making new all-time closing highs as it breaks out of a 3-year base:

No, we are not calling US an emerging market and no, this is not Pfizer on NYSE. The above is a chart of Pfizer, India. We remember Pfizer, India because it was the best performing stock in India in 1993 and closed that year at a PE of 300. Of course, that was the year when the 3-month T-bill closed at an unprecedented yield of 3%, a level the gurus said would never been seen again. How far have we come when now the 10-year yield can’t stay above 3%?

1994 was a very different year when Greenspan raised interest rates several times & the 30-year bond had a horrible year. Obviously Pfizer India and the Indian stock market got torched.

That brings us to Chairman Powell of this week. What if Treasury yields are peaking, at least for a month or two? And what if oil does go down some more & stay down? That would be beneficial to both Indian Rupee & the Indian stock market. And a stock like Pfizer India could be a beneficiary if Parets remains constructive on it.

We, of course, have loved the consumer sector of the Indian market. Whenever we have discussed our passion for Bourbon biscuits, we have spoken about INCO, the consumer ETF. Look at how this has outperformed the broad index in India:

Of course, all the above is based on the assumption that EM FX stabilizes. What about the converse – an emerging market than could go down hard after receiving good news this week? 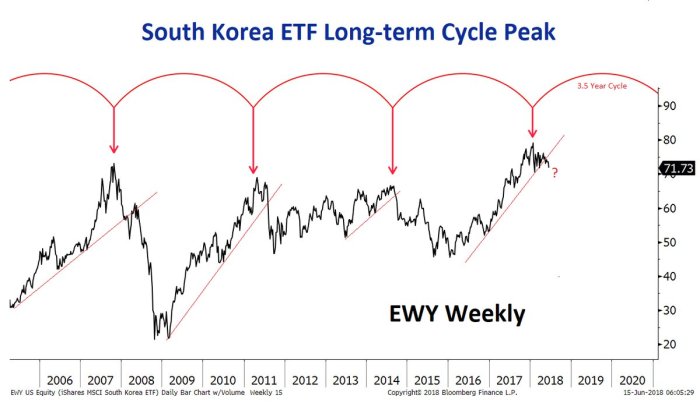 Getting back to Brazil, what do you think bothers Brazilians more? – The 20% fall in Bovespa, the crash in Real or what happened four years ago?

The fall in Real & Bovespa are material while soccer is spiritual in Brazil. So we guess the latter.

If trading Gold has broken hearts, then trading Silver has ripped them out. On Thursday, many spoke eloquently about the rally in Gold & the breakout looming in Silver. Then came the fall down the elevator shaft on Friday when Gold fell nearly 2% and Silver crashed by nearly 4% . Thank Goodness, we stopped trying to figure out these crazies sometime ago.

Oil was down worse on the week but seemingly because of rational reasons – Saudi Arabia & Russia hinting they want to get out of the Oil price accord. This is presumably ahead of next Friday’s OPEC meeting.

How much lower, Raoul? 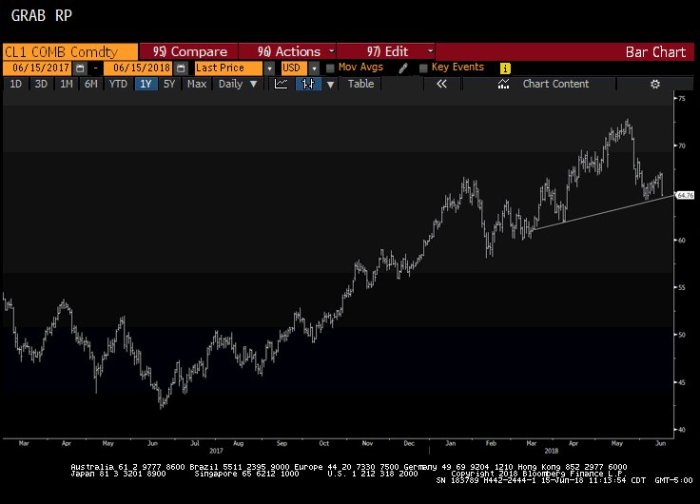 But Natural Gas could be another story:

Perhaps a leopard cannot change his spots, but it seems a Tiger can change his color: 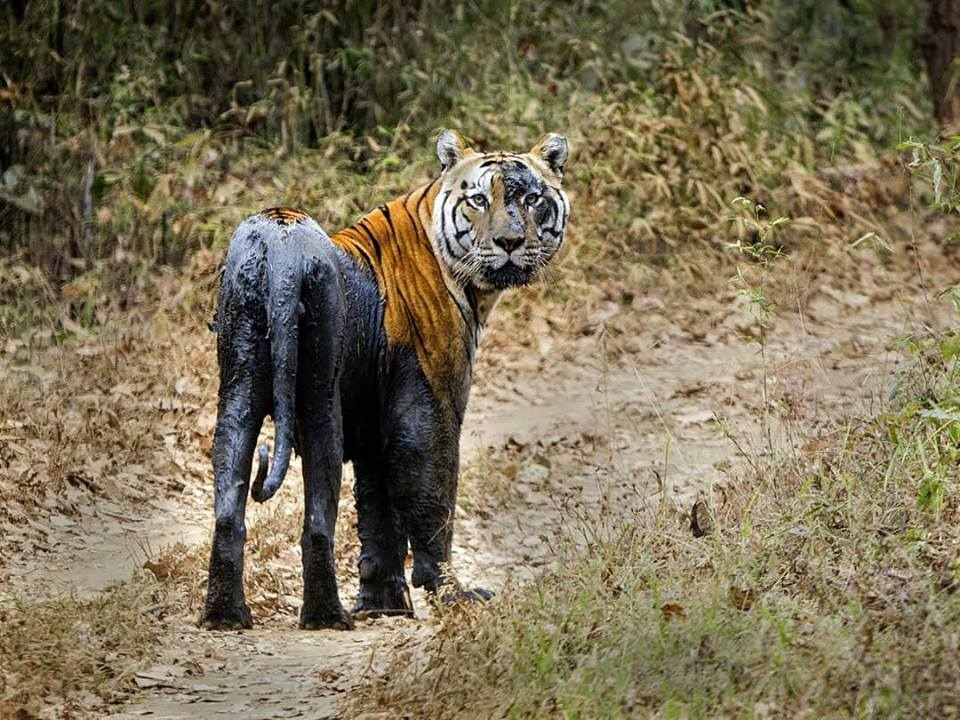