And they say, economics & numbers are unromantic. Frankly, we don’t remember so many people speaking so eloquently about payroll numbers.

Jim Cramer said “this economy is very strong and it is not overheating“. Rick Santelli pointed out there was “no wage pressure“. Jim Paulsen of Leuthold Group called it Goldilocks & wondered “if Fed is done a bit“. 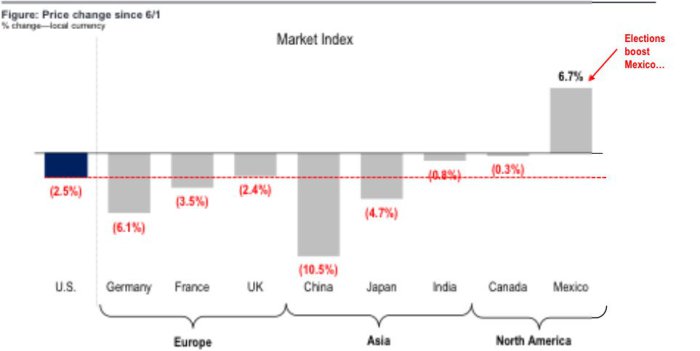 What is another way of describing the above chart – a “very serious synchronized global growth downturn” that has not yet touched America and makes it harder to see a recessionary shock in the US. That is what Lakshman Achuthan of ECRI said on BTV: 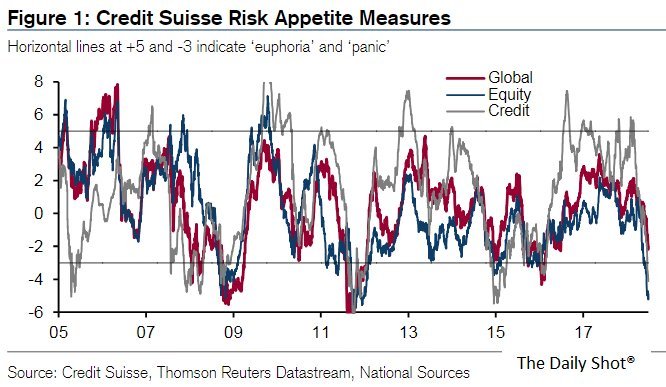 With all of that, are you surprised to see the result? 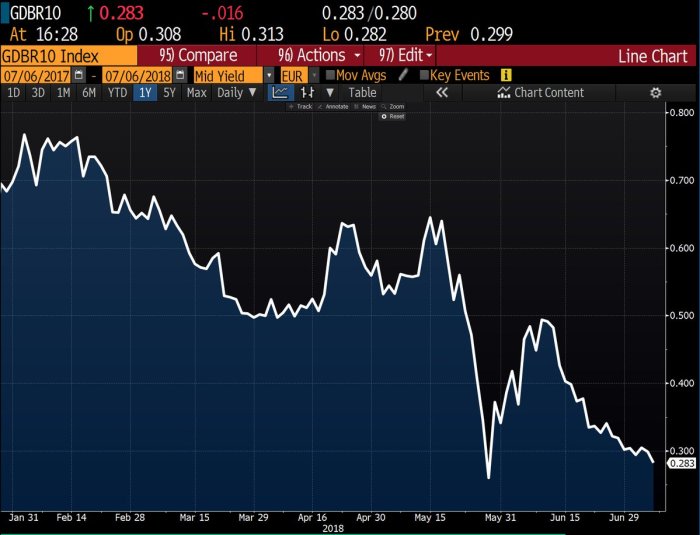 That leads us to:

Rick Santelli spoke on Thursday about the large Pension Fund demand for long maturity Treasuries and how that might be the bigger reason for continued flattening of the Treasury yield curve. Santelli has also spoken about how the 7-10 year curve might invert before others. Well, the 7-10 year spread closed the week at 4 bps and the 10-20 year spread at 5 bps. Is it time for the Fed to be done a bit as Jim Paulsen said on Friday morning?

The shorter end of the Treasury market is signaling something like that: 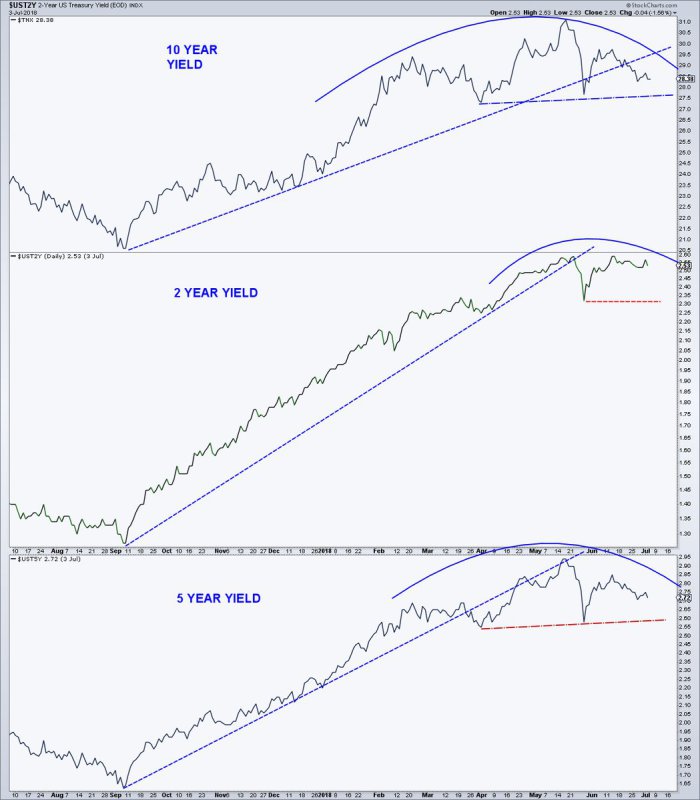 If correct, shouldn’t it mean breaking below some recognizable level? 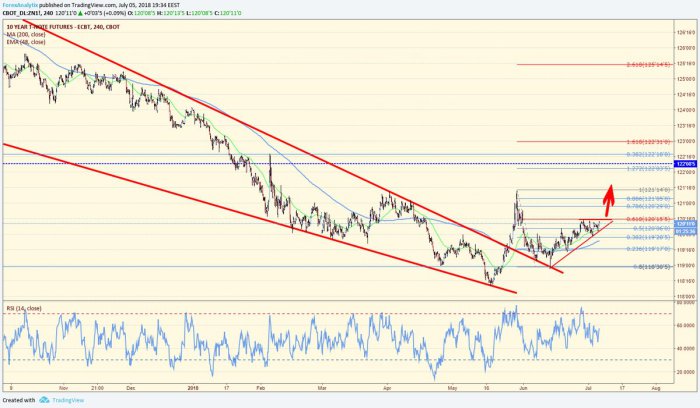 If it does, where could it go?

But is there any one who sees resistance looming above?

“Treasury Bonds ($TLT) have also been surging over the last two weeks. Friday morning sees the Bond ETF back at resistance. In fact it is the third time at resistance. Will it be 3 strikes and you’re out for Treasuries?”

A Treasury rally can be bullish for risk assets as well. But the following, if it occurs, will not be: 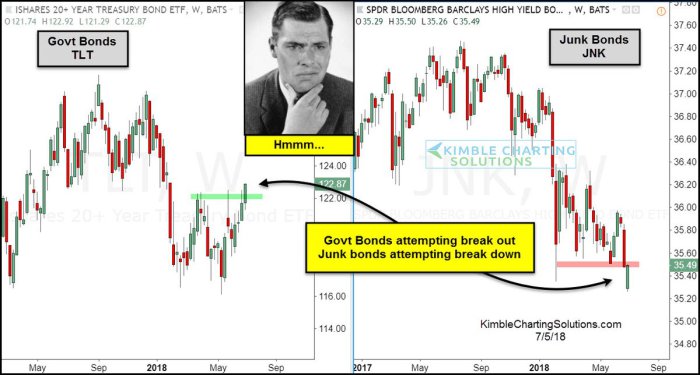 Strange isn’t it? As late as Thursday evening, people were fearful of trade tariffs becoming effective at 12:01 am on Friday, July 6. Then came Friday morning and the tension seemed to have lessened substantially, perhaps due to greater worries about the Non-Farm Payroll report. And after that report? It is almost as if the markets said “trade, what’s that?“

This might be laughed at by some & perhaps it should be. But to us, the markets felt on Friday morning as we recall market sentiments on January 17, 1991. Then the stock market had gone through a 20% correction since Saddam invaded Kuwait in August 1990. There was serious nervousness about the start of the bombing campaign on January 17, 1991. But the reverse happened. The bombing began and the stock market took off. Probably because the uncertainty had ended and the markets were convinced of US success.

Probably we are totally wrong but that is sort of how we felt on Friday morning. The tariffs had been imposed, the uncertainty was over and the Non-Farm Payroll report was so sunny that all fears of a trade war backfiring on America were at least temporarily put away.

Interestingly, Ian Bremmer, founder of the Eurasia Group, came on CNBC to argue that tariffs, while they might rise higher than now, will not do damage to US economy or even to global trade, which is kinda what the markets concluded after the payroll number.

Since tariffs on physical goods involve shipping, how countries handle shipments or deliberately mishandle shipments can affect trading costs. Listen to Lori Ann LaRocco of CNBC explain this somewhat in the clip below. The clip is 2 weeks ago but may now be more relevant given the implementation of the first set of tariffs.

This is a topic that interests us. We plan to read Ms. LaRocco’s book “Dynasties of the Sea” and review it, assuming we understand this complicated subject.

Encouraging signs were evident earlier in the week to smart gurus which they were kind enough to share on Twitter: 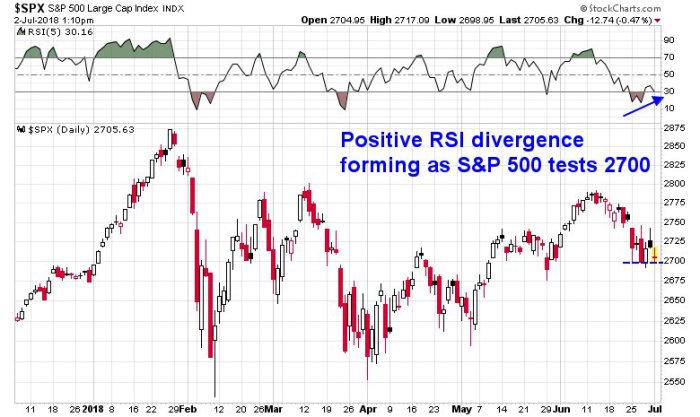 Then just before the rally on Thursday,

The S&P did explode out of this coil and rallied both on Thursday afternoon & on Friday. Did any of these gurus say what’s next? 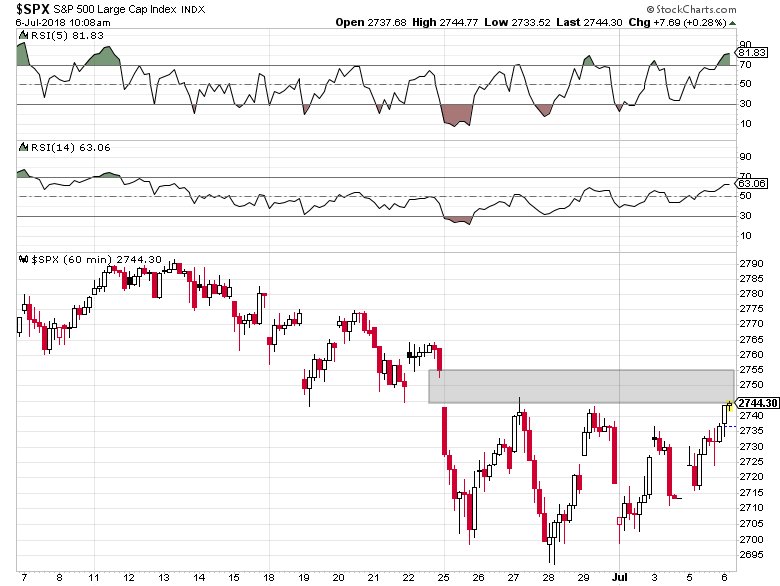 That’s the S&P. What about small caps? 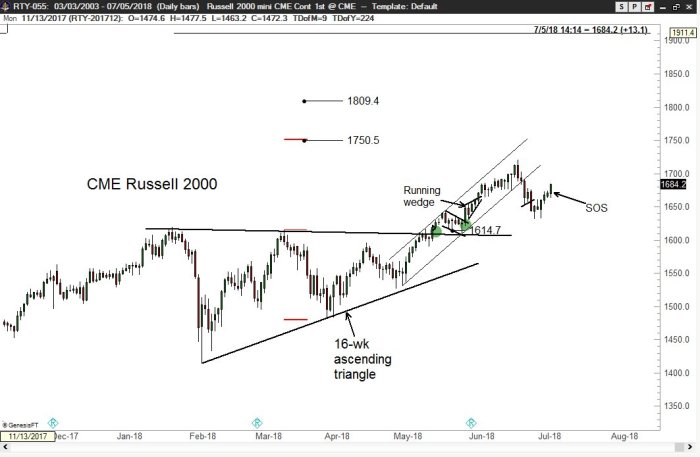 What about the NDX? 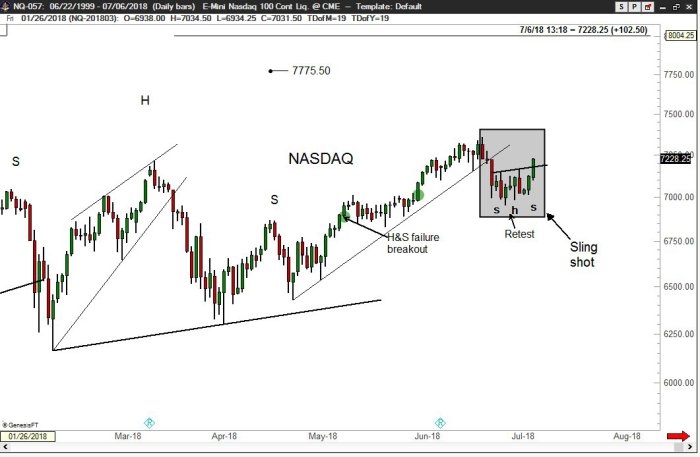 That’s technology, the largest sector in the S&P. Next is Health Care which was highlighted on Friday by Carter Worth of CNBC Options Action via XLV. That brings us to Financials, the sector that just can’t go up. Is there any one who is optimistic on Banks?

That brings us to the most cursed sector in global stocks – Submerging markets as it is often called. Interestingly, this sector outperformed US stocks on Friday, post NFP. Is goldilocks good for EM? It has been in the past with steady to lower Dollar & Treasury yields stable to falling. But who is putting on a trade on EM?