Remember the May 2013 election & the euphoria that greeted it? It was actually a successful election in the failed “state” that calls itself “spiritually pure” land. Even we appreciated the good aspects of it on May 18, 2013:

Fast forward to today to see how hopes always get extinguished in that sink hole of a regime. Nothing will ever work there because of the central reality:

The Army, assisted by its powerful Inter Services Intelligence (ISI), owns that “country” both de facto & now de jure. And the people of that land love the army that has owned them for the past few decades. In the past, the Army used blunt force to topple Prime Ministers & Presidents it did not like via military coup. But that brought the Army’s power into the open & the Army lost its popularity. The NonPak army learned, adopted and became much smarter.

First, they muzzled the media which was easy. Then, in the last few years, they brought the Judiciary to heel. Then they used their new puppet Supreme Court to remove Nawaz Sharif, the Prime Minister elected in the 2013 landslide, from office and to bar him from contesting elections. 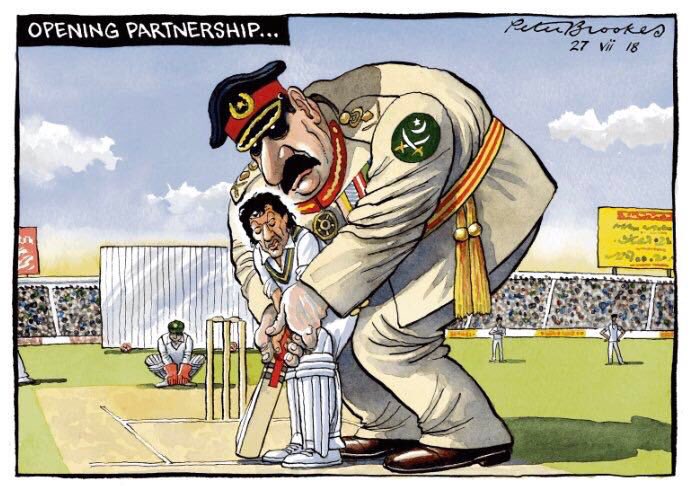 Then they chose the flamboyant Imran Khan, the ex-glamorous cricket star, as their candidate. In an election marred by violence, arm twisting & naked exercise of monetary & physical power, the Army got Imran Khan elected with the largest number of seats in their parliament.

Everyone in the world understands that this election means nothing. Imran Khan may have a large ego but he has very little power. If he has any sense & mental balance, he will say & do what the Army wants him to say & do.

The election also changes nothing. The state has become a financial sink hole. They have no money and no ability to repay any loans they get from international sources. The vaunted friendship between China & NonPak has become a mutual stranglehold around both their necks.

The NonPak government has to go begging to the International Monetary Fund, meaning the West, for loans to pay off Chinese loans. To get those, they need America’s blessings AND they have to open the books to reveal the financial arrangements of the China-NonPak economic corridor.

The only other option is for China to keep bailing NonPakistan out by giving more loans. China may not have a choice because the China-NonPak corridor is the most visible & most important component of Chinese President Xi’s One Belt One Road platform. But China is itself in a financial mess from its own mammoth debt bubble & from America’s tariffs on Chinese exports.

Is there anything positive any one can say about this “Spiritually Pure” Terroristan? Yes. No one wants to comprehend, let alone deal with, the aftermath of a truly failed unruled NonPakistan. To use an old analogy, Iraq was a angry elementary school student level problem; Iran would be an angrier high school level problem. But NonPakistan would be a mess of snarling crazy full grown college men. It is too big with too many young crazy people and no country wants to have anything to do with it. So it is cheaper & saner to keep paying the NaPak military just enough money to keep the lid on that future explosion.

But nothing more. Because now America, frankly, doesn’t give a damn about NonPakistan. And China is coming closer to making that decision as well. The NonPak military knows it and so, perhaps, they will force themselves to do the only thing they can – lower the temperature of their hate of India. At least until they line up the financial aid package they need desperately.

Editor’s PS: Regular readers know that the term “Pak-i-Stan” is even more heinous than “master race” term of German Nazis of 1920s-1940s. Because a master race merely makes other races into servants, while to keep a land “pak” or spiritually pure, the regime has to cleanse its land of all impure or “na-pak” religions. No wonder the regime that calls itself land “pak-i-Stan” or “land of the spiritually pure” has deliberately cleansed its land of Ahamadiyas, Buddhists & Hindus. It is interesting that no western journalist would ever use the “master race” term but they see no issue in using the far more heinous “pak-i-stan” term. Guess they don’t think Buddhists & Hindus deserve human rights the way White Europeans do. We, for our part, have resolved to NOT use the heinous “Pak-i-Stan” term. So we change it to NonPakistan.