Last week, perhaps impolitely but realistically, we described NonPakistan as a “sinkhole”:

But when does a sinkhole become unsinkable? When it is blessed with uniquely strategic geography. To be totally anti-delicate & anti-pc, geography is to NonPakistan what a uniquely appealing body is to a forever kept woman. That is why we wrote in our “sinkhole” article last week:

Guess what! This week China extended another $2 billion loan to NonPakistan mainly to pay off the sinkhole’s debt to China for “infrastructure” projects China is building in NonPakistan. Because without NonPakistan, President Xi loses his signature OBOR drive. With that loss his stature, already weakening thanks to President Trump, will suffer a major blow.

But wait! Doesn’t a previous kept “trophy” body remain attractive to the body’s earlier benefactors? Yes indeed and that is why we have to modify our Rhett Butlerish statement of last week:

Well, America doesn’t really give a lot of damn about NonPakistan. It is just that the body of NonPakistan, its geography, still remains as attractive & beckoning as it was 17 years ago.

Why? What is to the north of this sinkhole? The utter hellhole of US foreign policy called Afghanistan. However bad Iraq was, America got out of it in 8 years. In contrast, America has been in Afghanistan for 17 years and could well be there for another 17 years under its current lack of strategy.

But we are now seeing the first strategic change in US thinking about Afghanistan. It seems the Trump Administration has admitted to itself that they cannot win in Afghanistan.Well, if you know you cannot win, then you should get out, right? That is what the Trump Administration is attempting to do by making a direct deal with the Taleban. The main demand seems to be a guarantee from the Taleban to NOT allow transnational Islamic terrorists to build bases inside Afghanistan.

Well, if you allow the Afghani Taleban to enter the Afghan Government & be a major force inside it, you have to rely on the entity that created, nurtured & still gives sanctuary to the Taleban. That means once again making friends with the NonPak Military and the ISI. And that might mean a loan of $12 billion or so from the IMF to the mafia that runs the sinkhole. Why? Because post-Afghan-exit America needs that appealing geography of NonPakistan to keep pressure on Afghanistan. And America would also need a degree of cooperation from that regime.

Of course, this is a different Af-Pak that the 2008 one. The big difference is that the Taleban has an even more rabid & more jihadi competitor – ISIS. Despite the support of NonPak & Russia, the Taleban is finding it difficult to contain ISIS inside Afghanistan, let alone eradicate it.

So we ask – what is happening to Iran? 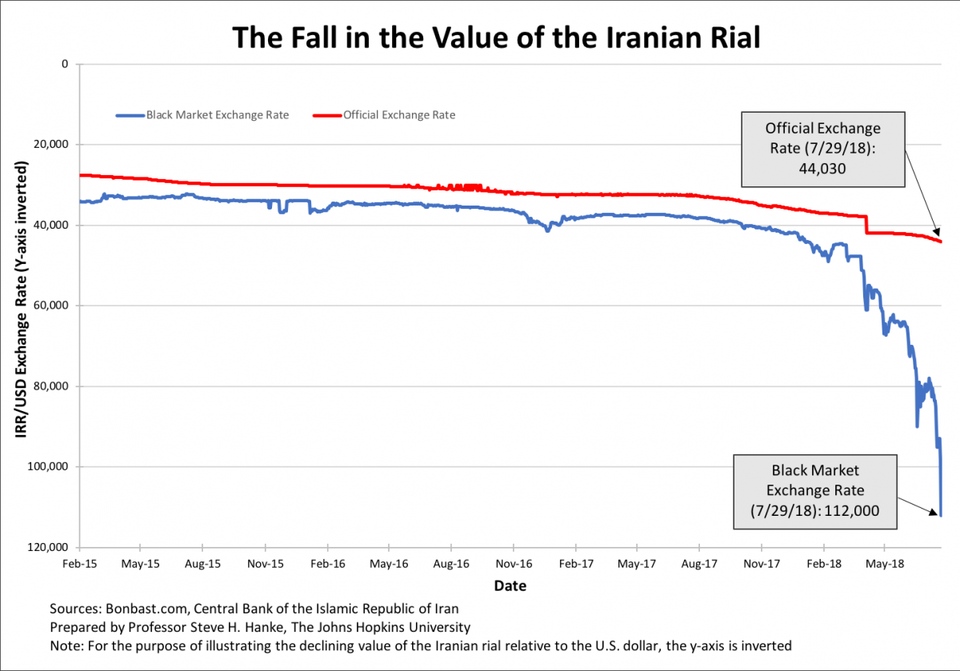 As Professor Hanke wrote in the Wall Street Journal wrote on June 29:

What is this currency plunge doing to inflation? 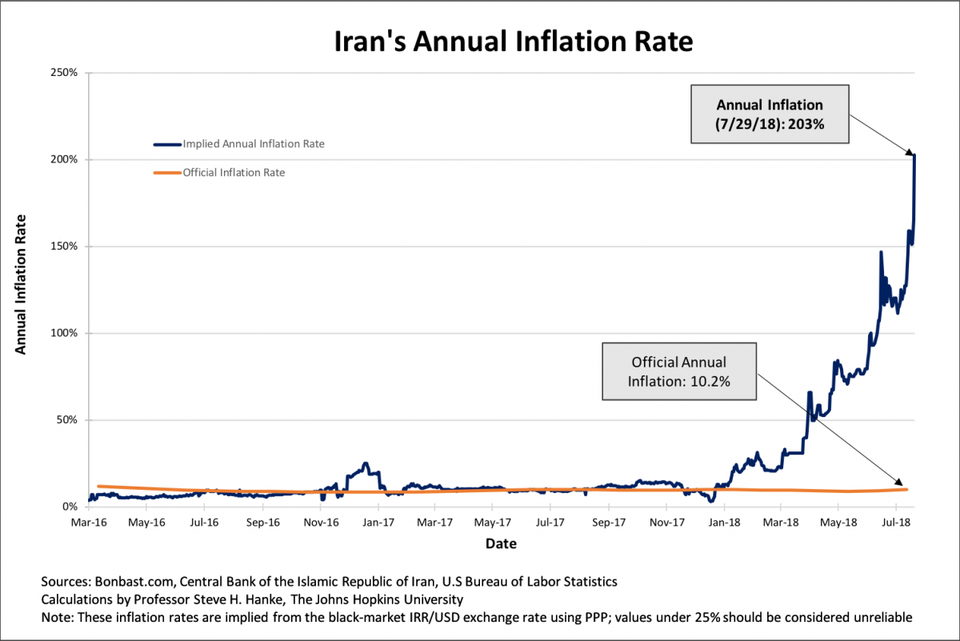 All this is courtesy of the Trump Administration which is engaged in “economic strangulation” of the Iranian regime. And it is working. There are reports of protests in Iran demanding Iran forget about Syria, Palestine & other far away ventures and focus on Iranians at home. As Geopolitical Futures reported on July 31,

The biggest sign of trouble came this week with a stern letter from Mohammed Ali Jafari, commander of the Islamic Revolutionary Guard Corps, to Iranian President Rouhani asking for “revolutionary action” to rein in prices. First this is rich because the IRGC is the entity that is behind Iran’s actions in Syria, the Levant & Yemen. Secondly, the IRGC is one the 3 pillars of the Iranian regime with Rouhani’s elected group and the Ayatollahs.

So why is the IRGC turning on Rouhani & the elected government? One reason is purely economic. The IRGC controls about 60% of the Iranian economy and an economic disaster could cripple the IRGC. Also the IRGC could be “preparing for the worst in Iran” by distancing themselves from the Rouhani administration.

Ask yourselves, is this Iran, an Iran stuck in its own economic quagmire, capable of exerting enough force to keep the warring factions at bay in Afghanistan? We seriously doubt it.

So who is left to help America exit Afghanistan? You know. But will the NonPaki regime be willing to take America back? Of course! That regime knows that her geography is the body of her appeal and her nature is to use that appeal to go with whomever will keep her solvent. She does get called all kinds of nasty names from time to time but what has been her defense to America for decades?

You have got to hand it to the NonPaki regime. She is the perfect geopolitical “Munni”.