1.God or Lights Out?

Napoleon is supposed to have said “God is the on the side of the biggest battalion”. In contrast, Turkey’s boss invoked his God against the strongest & biggest battalion in today’s world – the U.S. Dollar. 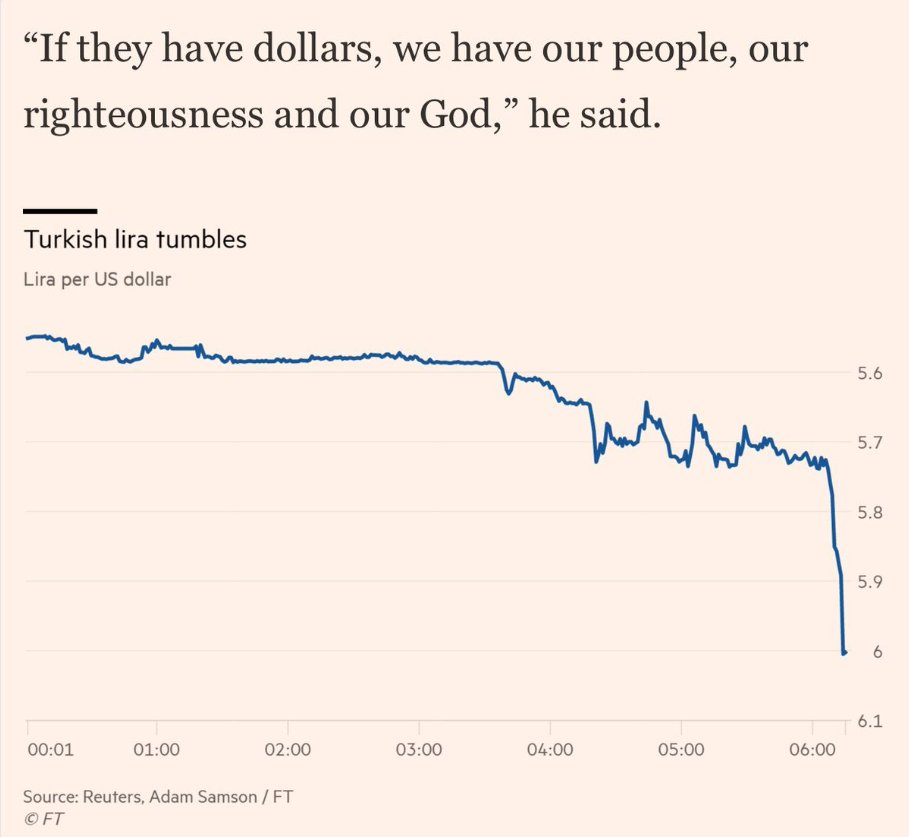 In what seemed to be a quasi-maniacal speech to a big live audience, Erdogan accused the US of trying to destroy Turkey’s economy. But that speech may have worked at least for now because, reportedly, the Turkish majority does think Turkey’s problems are due to America. However, that doesn’t last very long especially if bad economic conditions bite them.

As Larry McDonald of ACG Analytics argues in the clip below that Turkey’s huge 250 billion Dollar-Euro debt creates additional 5 billion lira of interest coverage for each 1% fall in the Lira. So he says “its lights out; there is no way the country can come out of it“. Larry also adds that IMF is unlikely to bail Turkey out and the only choices are China & Middle East.

China is already committed to bail out its “all weather” friend NonPakistan and China is helping Iran in stabilizing Iranian Rial. And, yes, China is adding a large stimulus to the Chinese economy to fight off the tariffs’ impact on China. So does China really have the financial balance sheet to bail out Erdogan from his self-inflicted disaster? And the Middle East? Aren’t the Saudis already strained? Do they want serious unrest at home like what Iran is facing from a population fed up of seeing their monies given away to Syria & Palestinians?

So who is left? How about Europe? Of course Europeans hate Erdogan, especially Merkel because of Erdogan’s threats & political campaigning within Germany. On the other hand,

So do the markets confine themselves to Turkey or do they test Italy next as Tim Seymour of CNBC FM said? May be that is why, 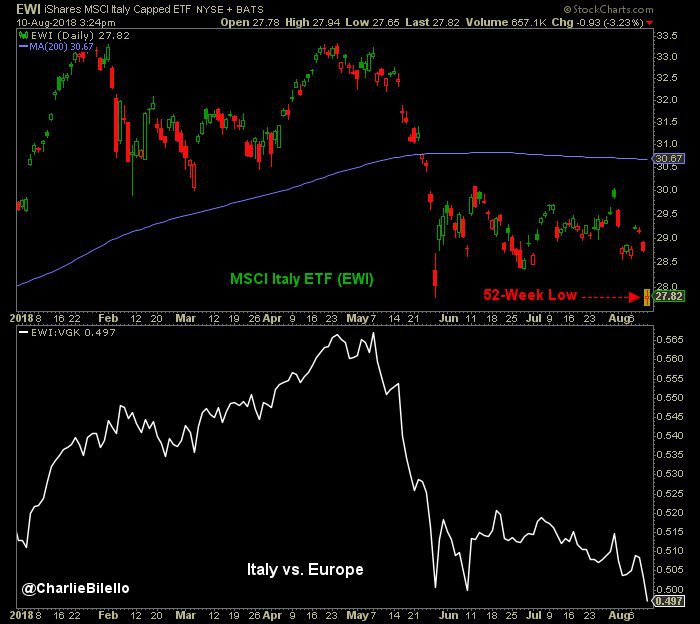 One silver lining is that Erdogan is not stupid. At least he has not been stupid so far. So after his fiery appeal to his domestic audience, perhaps he will privately come to some deal to postpone the end. And Europe has done this already with Greece. So it is possible that the final washout might be delayed.

Even before that, it is likely that Erdogan comes to a deal with the Trump Administration about Pastor Brunson. If that happens soon, then we could see a rebound next week from Lira’s & Turkey’s debacle on Friday.

But if that crisis continues unabated & actually worsens, then Rick Santelli’s term “immediacy” might be relevant to this crisis. How could the Turkey crisis worsen? Quite easily, as Jim Rickards pointed out in the Daily Reckoning:

Even in the first & benign case, as Rick Santelli said in the above clip, capital deployment away from Turkey & EM in general would make the US market a beneficiary. He meant the US stock market but we wonder whether another US market might be a bigger beneficiary.

And that other market may also benefit from the decisive movement of Friday: 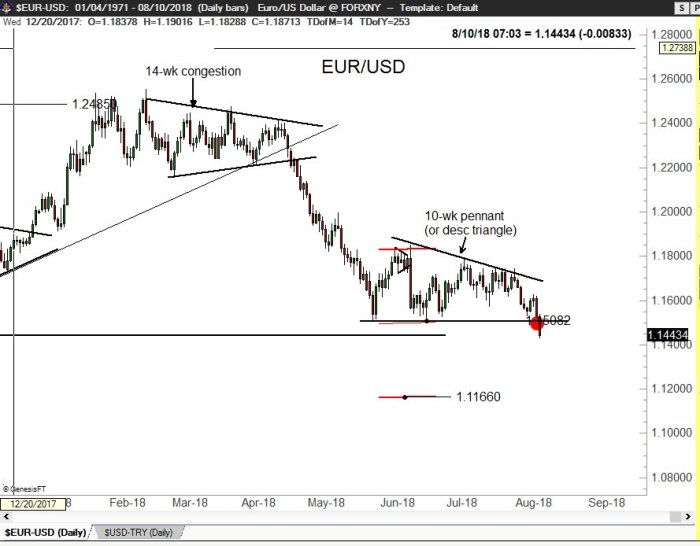 The Fed obstacle itself might be less of one thanks to Turkey & its contagion: 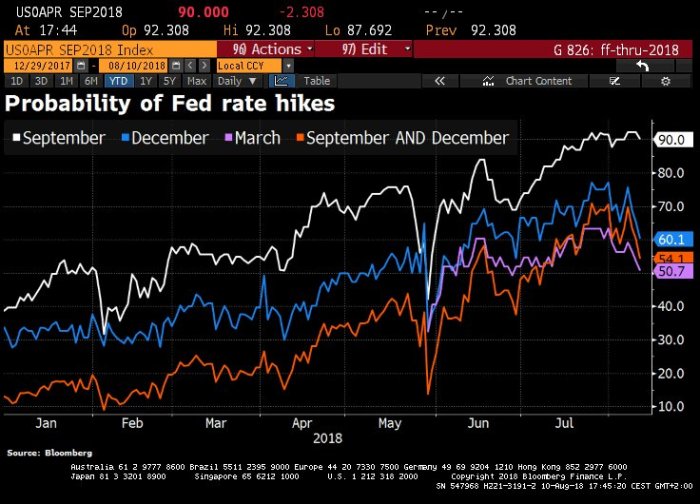 No wonder the 5-year Treasury yield showed the biggest fall of 6.7 bps on Friday. In contrast, the 30-year yield only fell by 5.4 bps, a steepening of that crucial spread by 2.3 bps. This decline in yields was actually smaller than the 9 bps decline in the 10-year German Bund which is threatening to break below the 30 bps level again.

The fall in the 10-year Treasury yield also broke a key technical level: 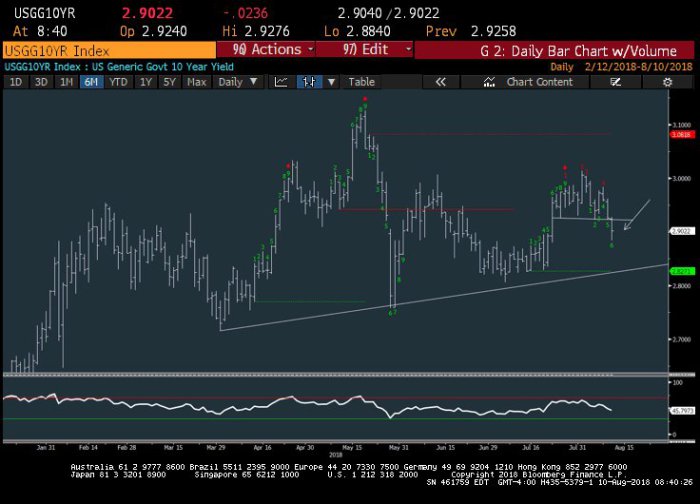 So we may get a deployment into Treasuries thanks to Turkey fright, strong Dollar & a technical breakout. But is the positioning ripe to benefit from such deployment? 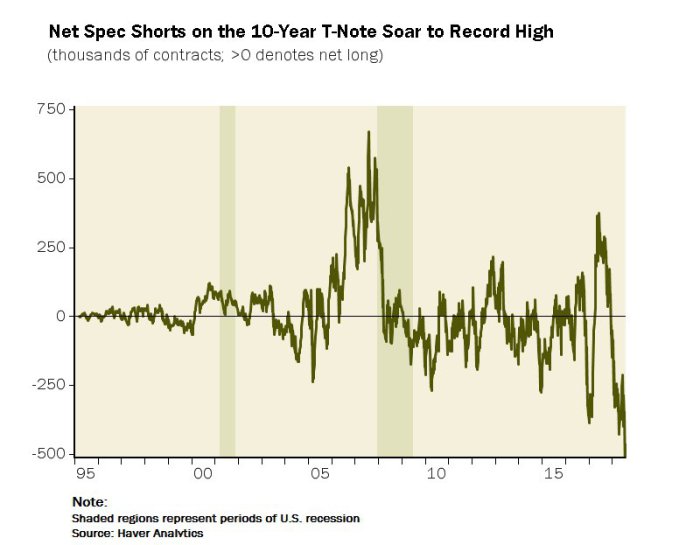 But is a trade case really well argued without a Head & Shoulders reference? 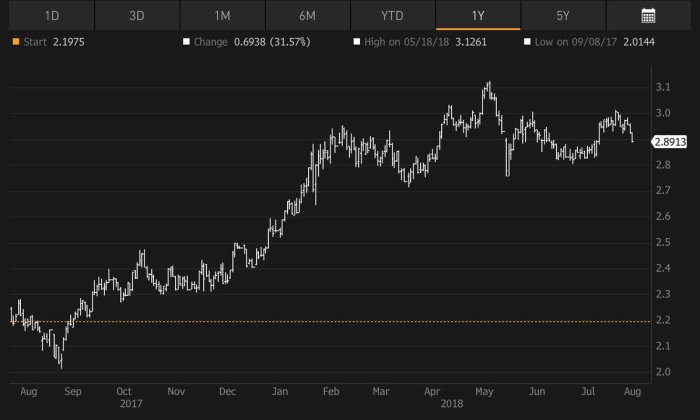 The real test of this bullish case will come during a rebound rally in the S&P.

Ever notice how Fin TV anchors often derisively ask stock managers “would you lend money to the Federal Government for 30 years (or 10 years) at 3.1% (2.9%)?“, suggesting that only stupid people would do so. The same Fin TV anchors hear professionals from BlackRock & other smart asset managers talk about the strong demand from Pension plans for long maturity Treasuries without even paying attention.

They should read this week’s article titled Why the Yield Curve is Flat & Why It May Steepen by David Kotok of Cumberland Advisors. We include a couple of excerpts below:

The incentives to buy Strips from the Tax Code expire on September 15. So what happens to the Yield Curve after that?

When in doubt, look at the breadth or so we have heard. So what did breadth look like during Friday’s decline?

But is “roaring growth’ in breadth too much of a good thing? 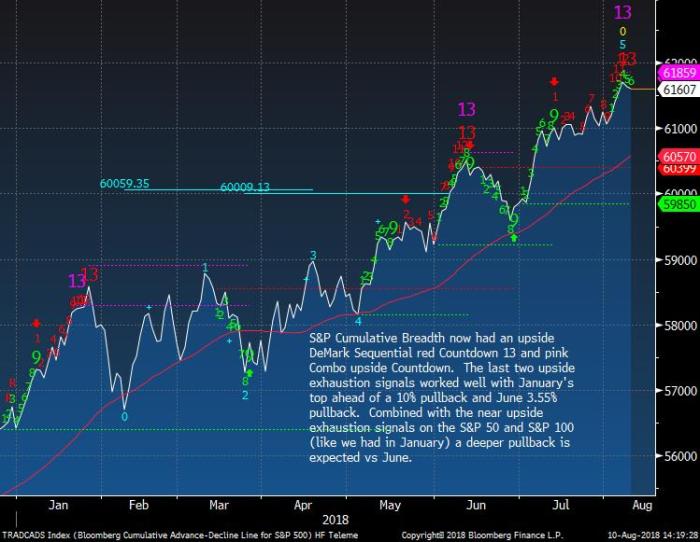 Last week we had written:

Monday & Tuesday counted as one big enough day with the S&P closing at 2858 on Tuesday. But we did not get the second rightfully big day to cross into new high territory. Carter Worth described the S&P top as an “intermediate top” and said you often see a sideways or down action before the previous top is broken.

We hope he is right because no one, except the shorts, want to see a failed breakout & a confirmed double top, at least not in the August-September period.

During the last several weeks, we had softly characterized countries within EM as “value” EM & “growth” EM. None of the big-name gurus who came on Fin TV & predicted EM rally to catch up with the S&P gave specific country or sector recommendations & none of the TV Anchors pressed them for such clear recommendations.

This week “value” EM crashed back to earth both in currency & stock market terms. Brazil, the anointed “value” market fell by 9.5% this week. There was serious selling in both commodity-based EM markets and in trade-affected EM markets like South Korea.

But what about EM markets that are domestic growth markets & relatively impervious to trade conflicts? One of them went to new highs this week, something the S&P has not been able to do. Just look at the year-to-date chart of this EM market index:

This is a smoother uptrend that even that of the Nasdaq 100, the star index of the US market.

But is this breakout above 38,000 a buy? Frankly, we would love a correction to buy. But some like the Indian market right now as a play on growth picking up, banks recovering & credit growth improving. All these enable Jack Lowenstein of Morphic Asset Management to expect real sustainable growth of 8%-10% as opposed to the nominal 8-10% growth India saw over the past few years.

His call is that Non-performing loans in Indian Banks are peaking out and that, he thinks, will create a very virtuous cycle going forward. Banks ought to do very well in that environment as they start growing their asset base.

Jack Lowenstein may not like China very much but Jeff Weniger of WisdomTree sure does:

With India at new all time highs & potentially China rallying ahead, the EM story isn’t quite dead, is it? But a nice correction is devoutly wished, at least by those who want to buy.