That was a clear warning from Larry Kudlow to China on Fox Business on Friday morning:

The reality is China doesn’t know what to do. As Professor Mohan Malik, a China expert, tweeted:

China first tried to fight US tariffs by letting the Yuan depreciate. But, as Larry Kudlow said, their twin problem is flight of capital by Chinese from China. So China tried to intervene in the currency market: 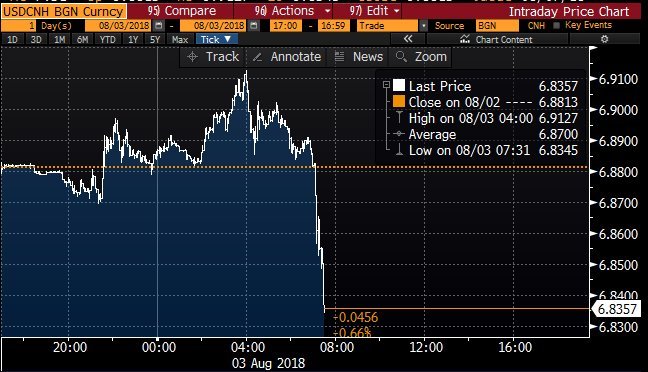 This was not positive for Chinese stocks: 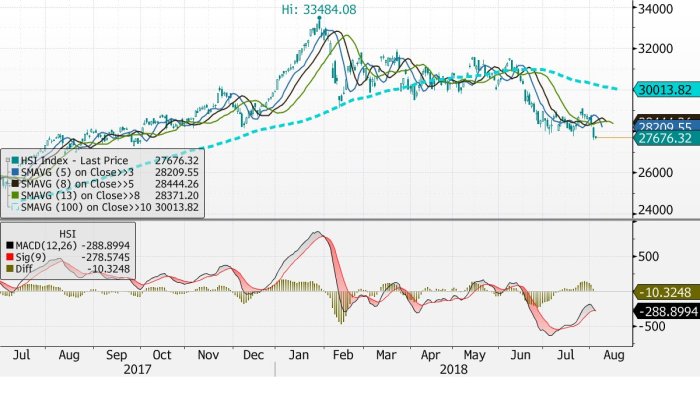 Some are looking to the next 2-4 weeks: 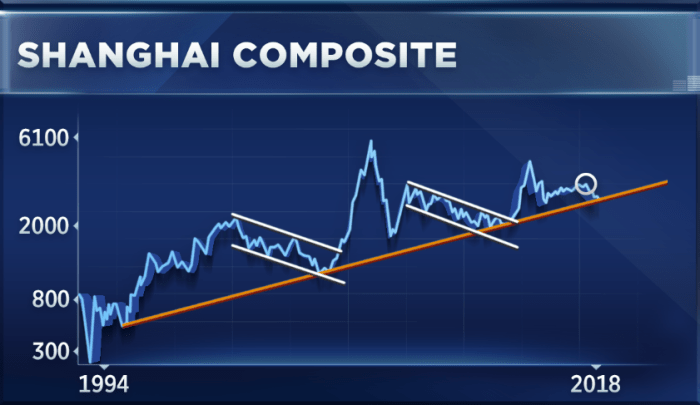 Craig Johnson also pointed out that the correlation between Shanghai Composite & the S&P 500 is positive 0.68. So a big decline in China should have a corresponding decline in the S&P 500.

But correlations shmorelations is what small business seems to be saying, according to a survey of 300 businesses from July 16-18 by UBS Wealth Management Americas;

The markets seem to concur with these businesses: 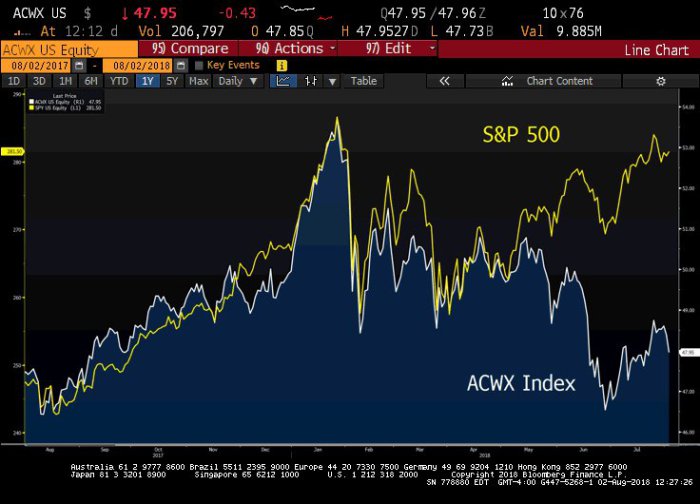 Does that mean Chairman Powell & the FOMC are on the wrong path? And if so, what might happen?

Not only does Scott Minerd think the FOMC is wrong in thinking the economy is getting stronger not weaker, he thinks a financial accident is possible in the usually treacherous September-October time frame.

Despite the daily up & down moves in Treasury yields, the weekly move was really small. The 30-year yield rose by 0.2 bps, the 10-year yield fell by about 0.8 bps. But yields across the 5-2 year curve fell by about 3 basis points, thus steepening the curve a bit. The positioning remains very short: 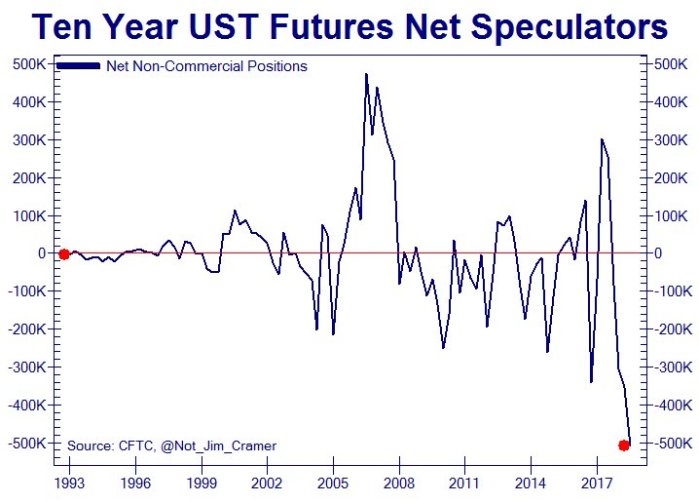 That seems to have prompted a bear to wonder about a Treasury rally. Peter Brandt wrote in his article Clues from the Treasury Markets:

His charts are best viewed in his article Clues from the Treasury Markets.

And don’t Bonds need some love after two down years?

This makes next week interesting. Because such sentiments expressed on a Friday, especially a NFP Friday, have led to rates rising hard the following week.

You had to be on Mars or Venus to not know that Apple became the first stock in history to get to a Trillion Dollar market cap. This brought out numerous charts showing what happens to such stocks after achieving these lofty levels. One of them shows them all: 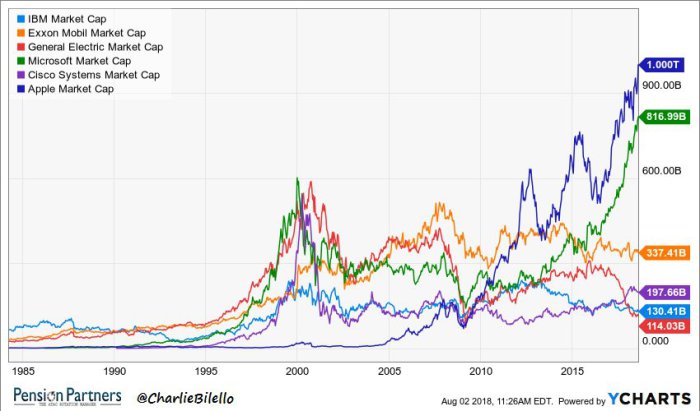 A broader message is: 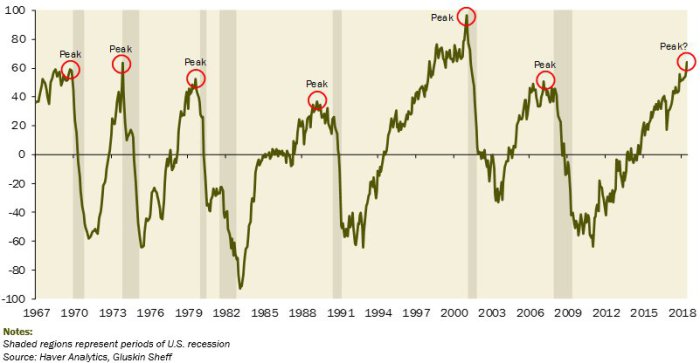 Also Nasdaq stocks are reaching an important line from beneath: 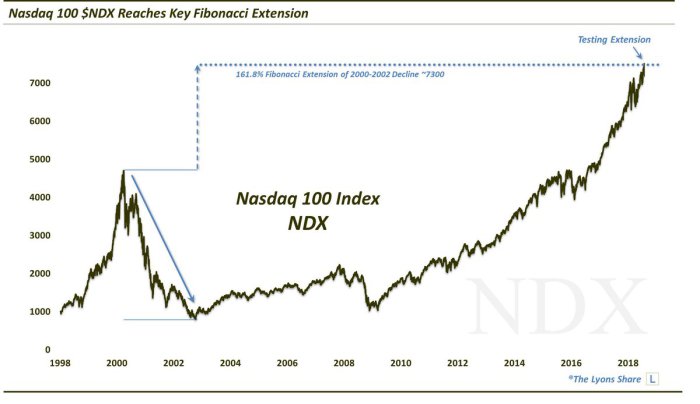 That is consistent with:

The S&P closed at 2840, just a big day or two from getting to a new closing high. 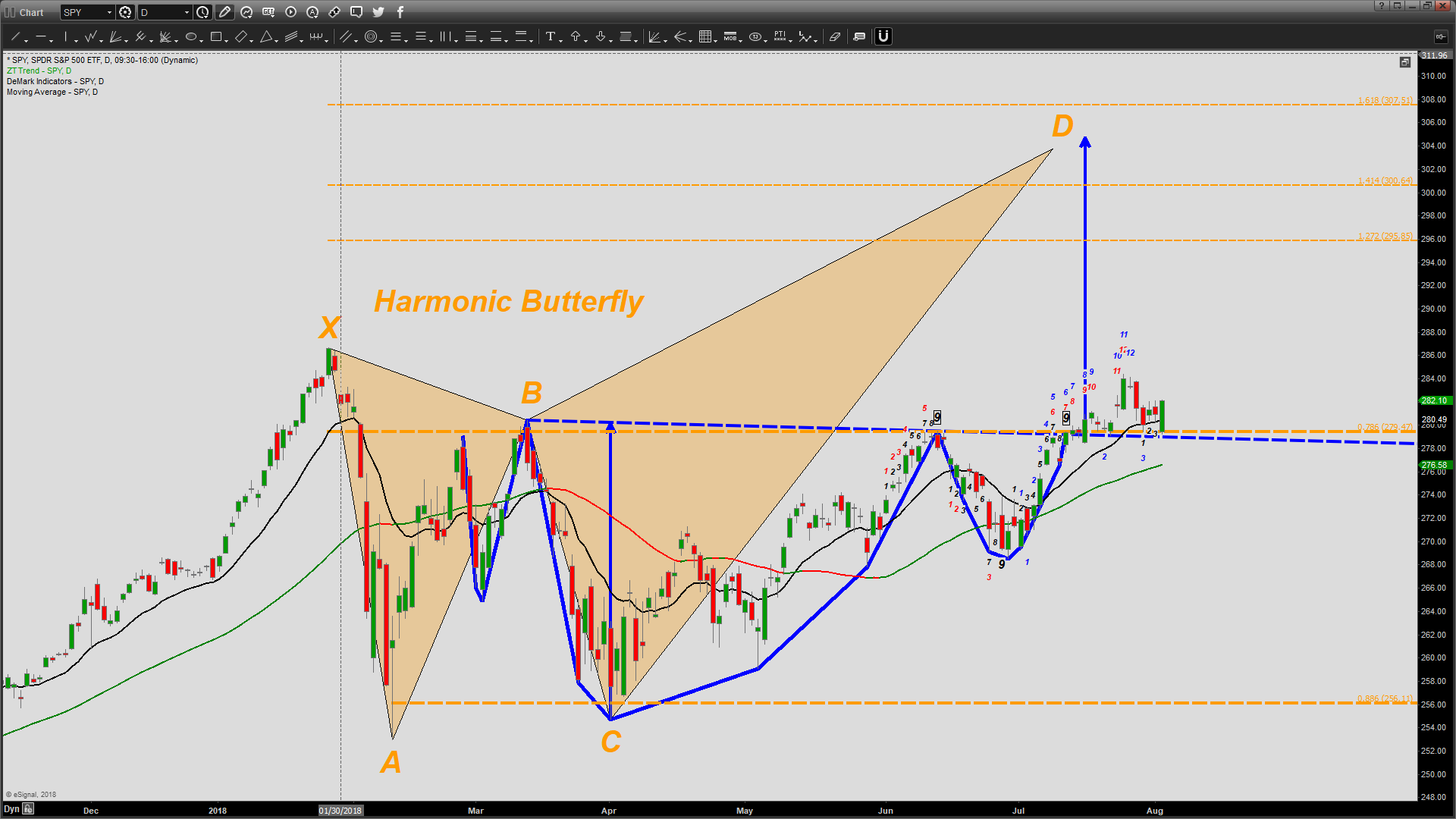 While the NDX was up 1.34%, S&P was up 74 bps, the Russell 2000 underperformed & actually closed down on Friday. But Greg Harmon of DragonFly Capital was Positive vibes in Russell 2000 on Thursday, August 2:

What about the S&P? Lawrence McMillan of Option Strategist wrote in his Friday summary:

Marko Kolanovic, the Quant Strategist from JP Morgan, said this week that he is positive on EM & US while not so positive on EU & Japan. And he is a little more positive on EM than on US. That is mainly because EM positioning is very light & CTAs are short.

Actually, the country we termed as the “value” pick of EM has done great:

And so has the “growth” pick of EM. Actually it seems to be breaking out: 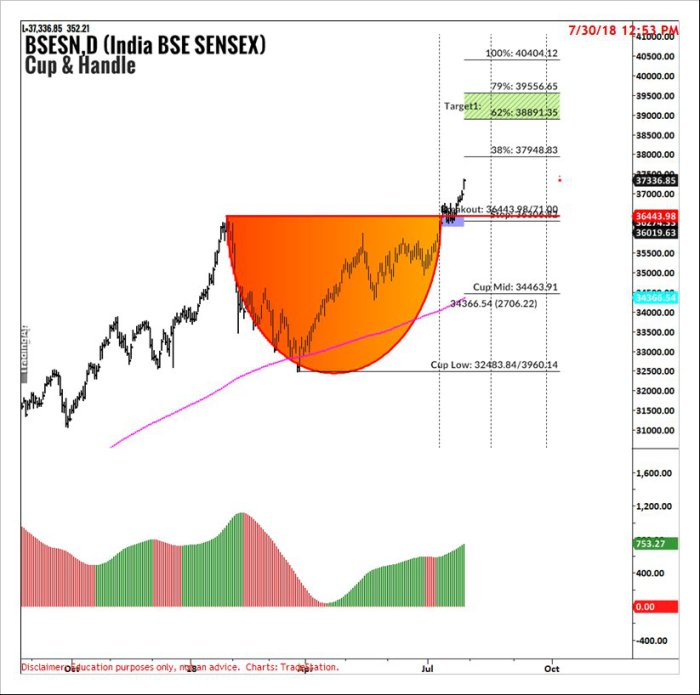 Those who know anything about India know that success of India depends on very different things than the success of most other countries:

None of this changes the impact of the U.S. Dollar on EM: 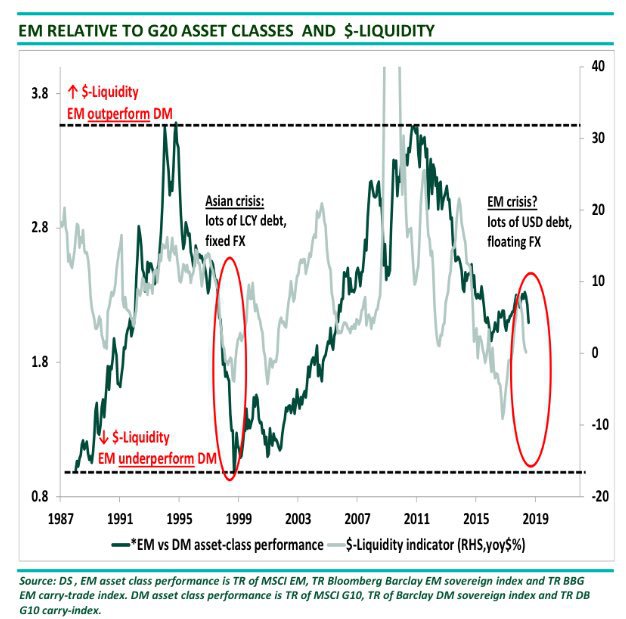 Where are we on the Dollar?

But one guru is clear: 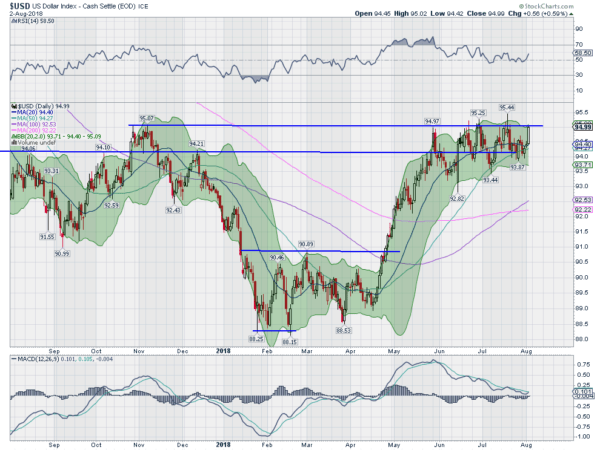 Rape is a horrible act and one that really cannot be discussed without utmost seriousness. But the mess in Indian society tends to take the sting out of the worst of things and make you say what “Raymond” said about his family:

Hopefully, your order in this section turns out to be the opposite. First the laugh. The director of the following movie swears his film is based on an actual case of a young man who was imprisoned for raping a female buffalo; not just any buffalo but a prize-winning buffalo who won the title Ms. Tanakpur, after the small town of Tanakpur.

So the advisers recommend charging the young man for raping the bigshot’s prize winning female buffalo – Ms. Tanakpur. The local Vet is coerced to provide a medical certificate of rape. The young man comes from a poor family and has no hope. But he get a smart lawyer who manages to get the case thrown out; not by invalidating the rape but by questioning whether the buffalo produced in court was actually the same buffalo who was “raped” by the young man.

That wasn’t enough. So to placate the big shot, the town council gives its own judgement – the young man was instructed to marry the female buffalo he had raped. The film is actually quite decent & totally realistic about what happens to a poor young man charged with rape of any female in today’s India.

Being India, you know that truth has to be stranger than fiction. That brings us to a real case filed this week against 8 men for gang rape of a pregnant female: 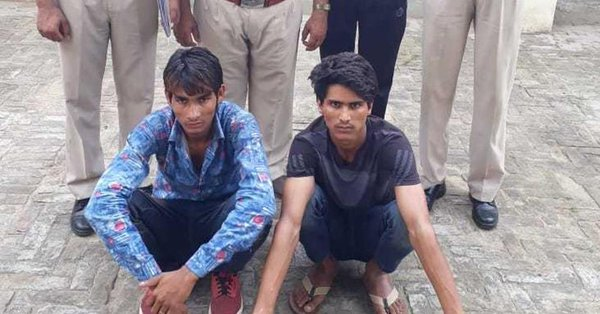 By the way, Mr. Vishwanathan (Vishwa-Naathan) is the well known editor of the reputed magazine Swarajya. The people of Haryana, a northwestern state, are considered to be among the most male-oriented people in India. So the state machinery is very vigilant & unforgiving of bad treatment of females. That is why you see the police officials standing proudly for their photo-op behind the photo of the two accused.

Another rape incident occurred two weeks ago in the neighboring & just as male-oriented state of Panjab. In this case, a 34 year female teacher was sexually abusing a 15-year old boy who was also her student. When the parents found out & filed a police complaint, the female teacher locked up the boy in her house. The boy was finally rescued by the parents with the help of her neighbors.

The police did charge her but what punishment did the female Judge give to the 34-year female guilty of statutory & forced rape? 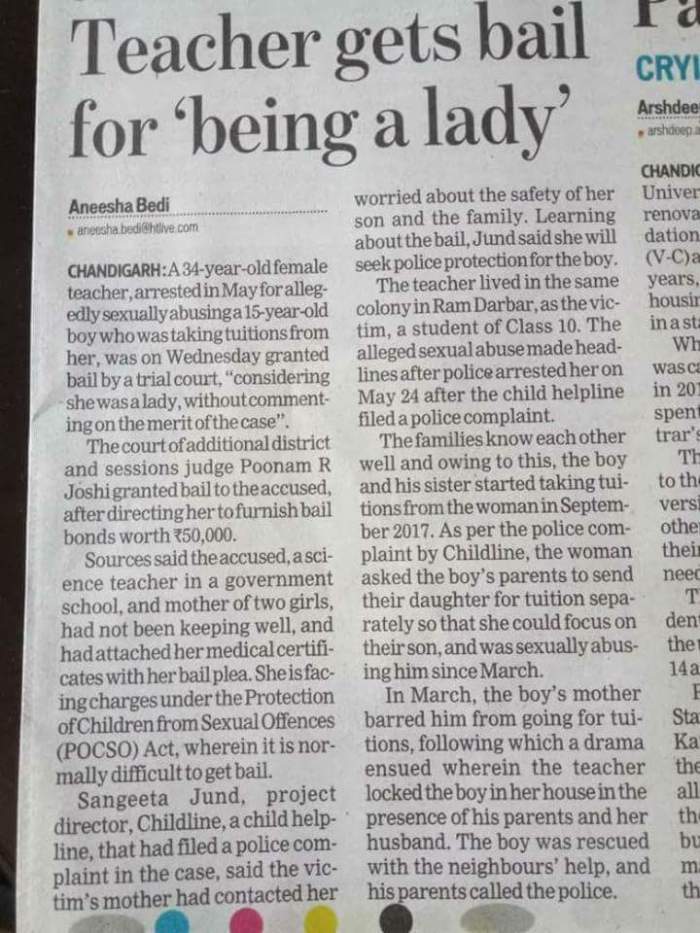 Notice the Judge referred to the accused rapist woman as “lady” and not a woman. That is a unique aspect of today’s pro-women laws in India. A man can get charged & imprisoned under the Insult to Modesty of Women law because he called a woman “a woman”. No joke. A woman has to be called a “lady” and calling her a “woman” is deemed insulting to the woman and hence a crime under the law.

Also understand that being granted bail in this case is tantamount to an acquittal for the accused rapist woman. Because the courts are so jammed with cases that it would take over 10 years for this case to come to trial. And after that long a period, very few are interested in spending months to fight the actual case.

So a woman guilty of sexually raping a 15-year old boy & holding him physically hostage is let go free on bail while young men accused of raping a female goat would be imprisoned for years. What a Judiciary? What a legal system? All this just so that India’s diplomats can hold their heads high in the world and proclaim India’s concern & action in protecting its females. And also because women outnumber men is India’s electocracy and Indian women are more dedicated in voting than Indian men.

Now you understand why we regularly advise families to leave their young sons at home while traveling to India. Your young son could accidentally bump into a woman in the crowded airports, train stations or on the street. Then the woman would have the right & the ability to charge your young son (as young as 2 years old, in one case) for molestation. And neither your son nor you would have any defense because the word of the victim woman is deemed sufficient to convict your son. Unless, of course, both she & you are smart enough to come to a financial payment for her emotional trauma.