On Friday morning, Sara Eisen of CNBC said around 10:13 am – “seems the market needs something from the Fed “. Kudos to Ms. Eisen for finally seeing the light. At least she had the courage to say it out loud. Not many others have shown that courage. So they got scoffed at by the Bond King:

Our “back to the Fed” title was drawn from the initial comments from the CNBC Fast Money gang on Friday 5:00 pm:

But what exactly did the Fed do wrong? They have been raising rates & draining liquidity all year without too much impact. The bond market has been aware of the plan to steadily raise interest rates into 2019 or even 2020. Yet, the bond market kept in its long term channel. The only warning it kept giving was the flattening of the yield curve. 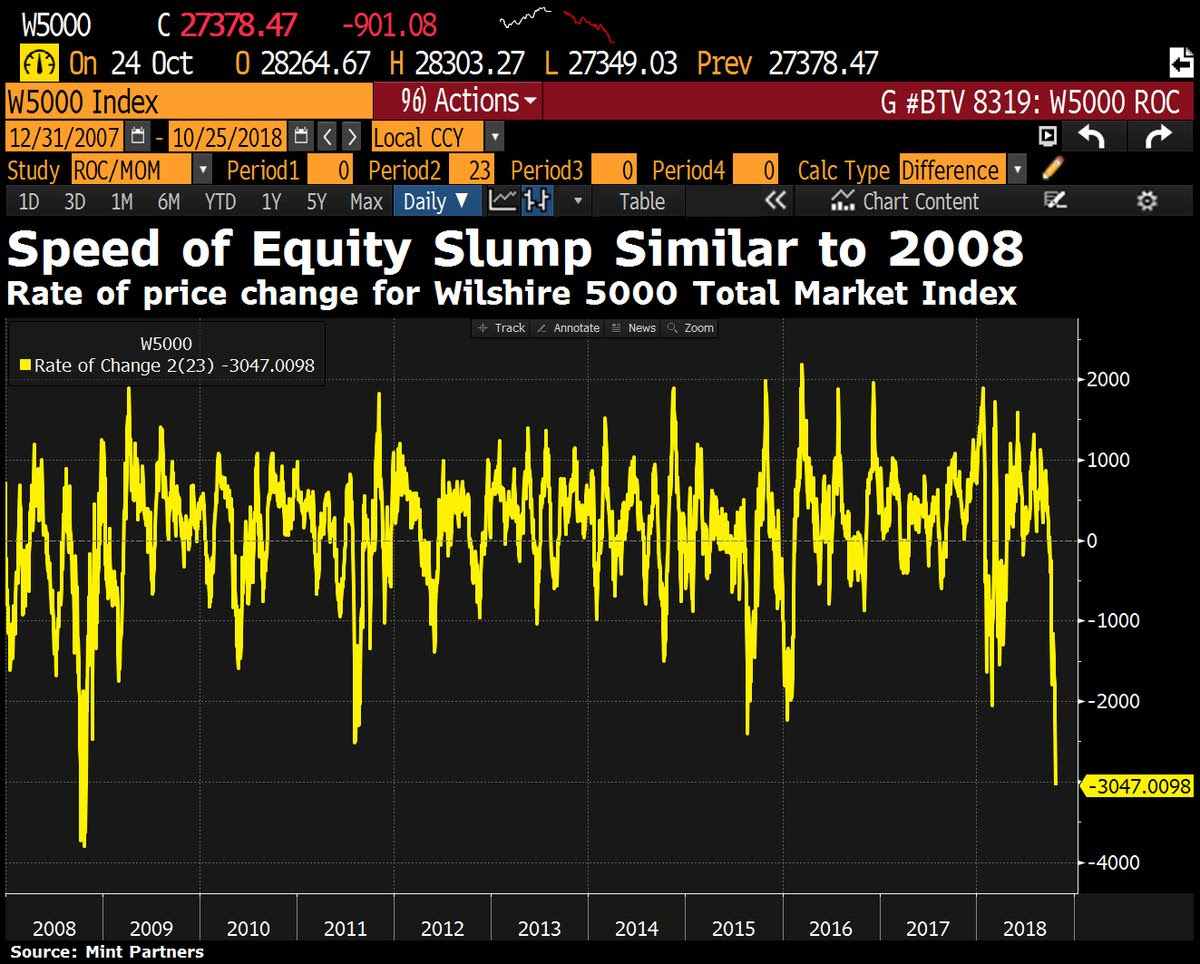 Remember Ruchir Sharma’s warning about a market decline hurting the economy because the global markets are 3.5 times the size of the global economy! Look what a historically small decline of 9% or so has done in terms of economic damage.

Clearly all of this didn’t start the day after the Powell’s “may go past neutral” comments on October 3. The fall in the Russell 2000 & other broad indices had begun early. But given the market caps of Dow, S&P,  NDX stocks, the bulk of the market cap decline came post October 3.

This is why Sara Eisen’s comment about “the market needs something from the Fed” was so appropriate. Of course, had Sara Eisen been at her previous network, she would have heard “something” from Robert Kaplan of the Dallas Fed earlier on Friday morning:

This is a clear walk back, in our opinion, of the casual “may go past neutral …long way from neutral at this point ” comment of Chair Powell of October 3. Kudos to Bloomberg TV for isolating this 1:27 minute clip for simple folks like us. Actually, Vice Chair Clarida had also tried to inject some caution & date dependency into his own interview with Steve Liesman on Thursday. But that message was much more hidden than Kaplan’s clarity.

What about inflation though? 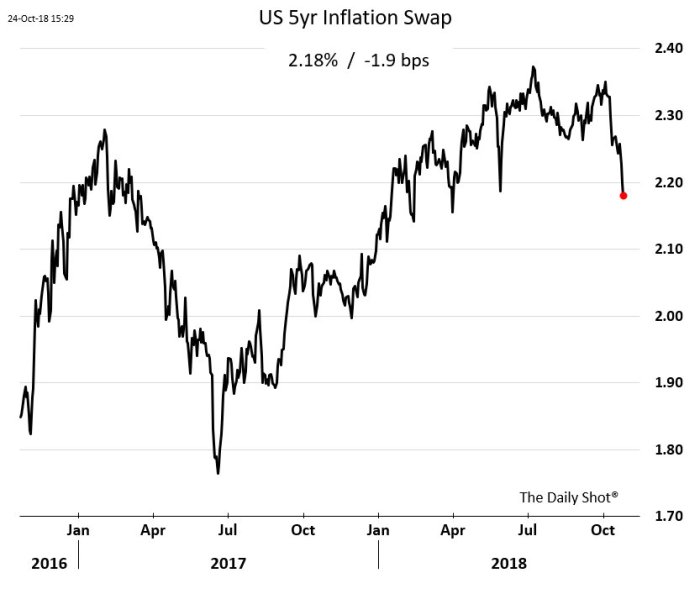 Combine all this and what do you get – bull-steepening for the week with the 5-year yield falling by 14 bps on the week while the 10-year yield fell by 11 bps and the 30-year yield by a paltry 5 bps. 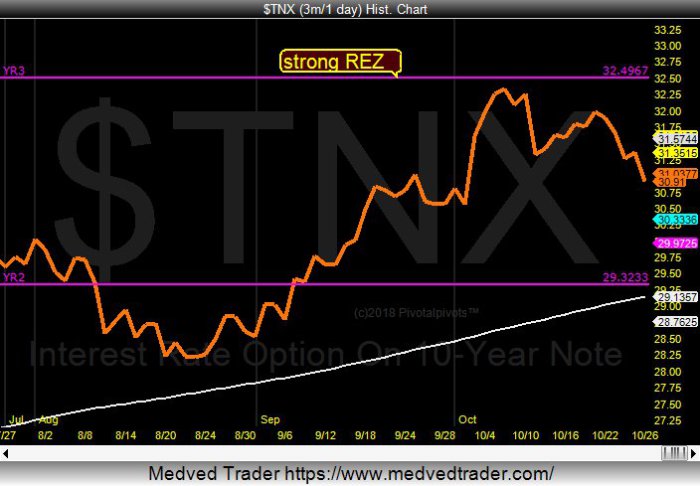 Of course, the NFP report of next Friday, the midterms & the FOMC the week after that will have lot to say about where the 10-year yield goes.

Calling a bottom is a tough business. Witness:

That was a trap door on October 11, not a bottom. So what about now?

How rare is this decline? 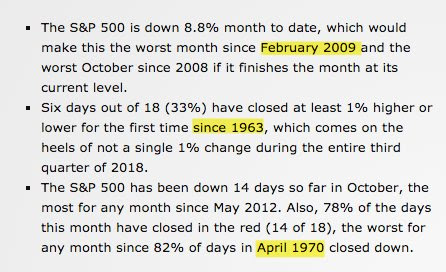 How oversold does it look technically?

How about looking via SPX vs. VIX? 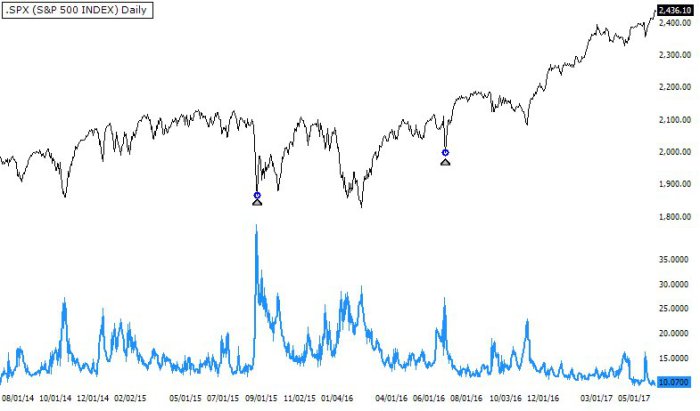 Both proved superb buying opportunities. How do you say this without a chart?

But some disagree, including the guru with the hot hand. Mike Wilson of Morgan Stanley said on Thursday that this rally can last 3-5 days but the decline is only 80% complete. He expects to see 2450-2500 in the next few weeks.

A more chilling possibility was voiced by Liz Ann Sonders of Schwab who said we might look back in a couple of years and see that the high on October 2 was the peak of this bull cycle. She also said the market often sniffs out a recession. Mark Yusco of Morgan Creek seemed fairly sure that this period is much like October 2000 and he expects a 40-50% correction in the next couple of years. In that vein:

Finally, a warning about “funnymentals” from a proven guru: