After a week like this, it is entirely appropriate to say kudos & thank those who alerted all of us & protected capital of investors. Remember what David Kotok of Cumberland Advisors wrote in the first week of August in the article article titled Why the Yield Curve is Flat & Why It May Steepen :

The article also warned that this incentive to buy strips will expire on September 15. This article on August 11, 2018 should have alerted longs in Treasuries to watch out for waning of demand after September 15.  Add to this the 3 different warnings issued by Greg Harmon of DragonFly Capital about TLT & Treasuries.

Any one who read & followed these warnings avoided this week’s collapse in Treasuries. So kudos to David Kotok & Greg Harmon. Kudos also to @TommyThornton for warning investors about small caps: 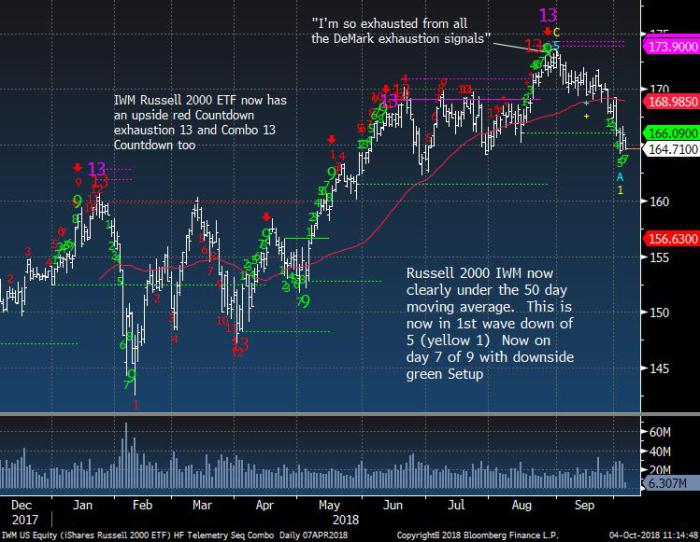 Two factors created the explosion in Treasury yields that shocked markets this week. The first & harder to take back is the sudden & stunning decision by Jeff Bezos to raise salaries of all Amazon workers to $15/hour. Whatever his motives & tactics to hedge the increase in Amazon’s compensation costs, the public announcement scared bond investors as little else could. It created the scary vision of permanent wage raises for all workers through out America.

The next day came a very strong ADP and a stunningly high Service-Sector ISM. Long maturity Treasury yields exploded up by 10 bps. Added to the inferno were comments by Fed Chair Powell. Seemingly unconcerned about what he was signalling, Chairman Powell said the Fed might have to overshoot beyond what was thought to be neutral rate. That did it. Nothing could stop Treasury yields from breaking decisively out of the 30-year old channel. Friday’s NFP report did nothing to slow down the up move in rates. While the headline jobs number was much lower than expected, the revisions to August & July more than made up for the headline miss.

Unlike the Amazon announcement, Chairman Powell can take back at least part of his statements. Who expressed the strongest reaction to Powell’s comments? The same TV host who stunned everybody 10 years ago by ranting “they know nothing” on CNBC. Jim Cramer was only a pale version of that ranting red faced Cramer, but he was explicit. He said on Friday on his Mad Money:

Chairman Powell certainly spoke like a bull & he created a stampede. But did this bull damage something? Is the US Economy more like a china shop which can be broken? While almost everyone would probably say no, David Rosenberg remembered something from 1970:

Look what Lakshman Achuthan of ECRI said this week:

This could spill over to the broader economy, he said.

3. What’s Next for Treasury Rates?

This breakout could well prove to be secular.

What is a technical target for the 30-year yield?

It is highly unlikely yields go there in a straight line. Already, the fall in Treasury prices has been historic both at short & long end: 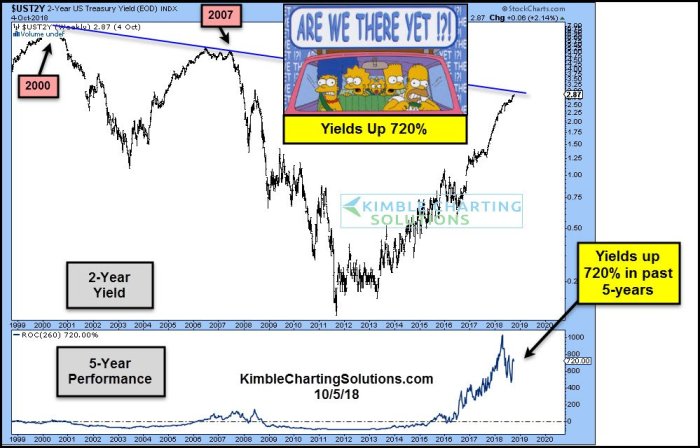 And on a total return basis: 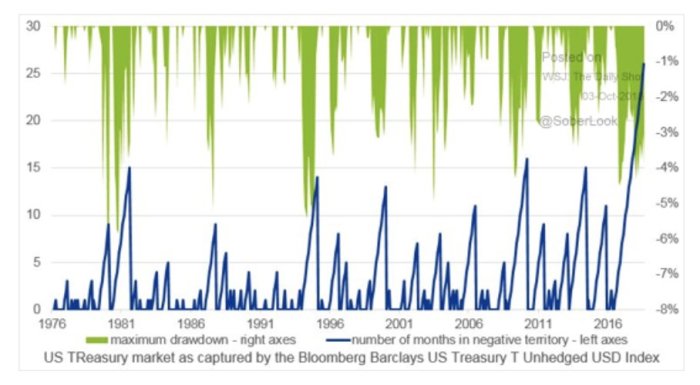 So the question is when does this explosion in yields simmer down? Believe it or not, one says almost now: 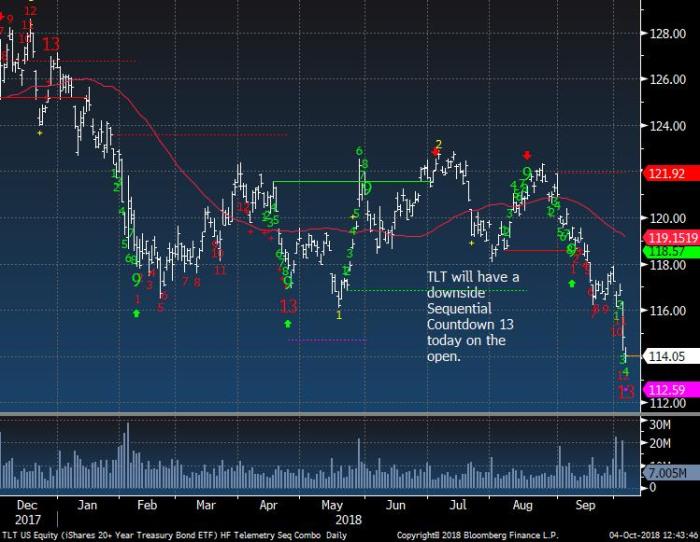 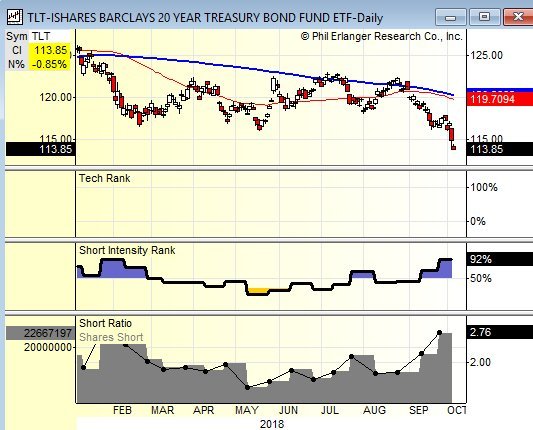 Jim Bianco said on BTV that this leap in yields will be short lived without rising inflation. He added rates might keep going for a couple of more weeks but he thinks we are near the end of the move rather than near the beginning.

Bianco then made a major point that has also been made by Gundlach. He said the relationship between stocks & bonds might be changing.

In that case, as Bianco said, asset allocation could be the toughest decision ahead of investors & asset managers.

What happens to Risk Parity funds in that case? Look what just one day did: 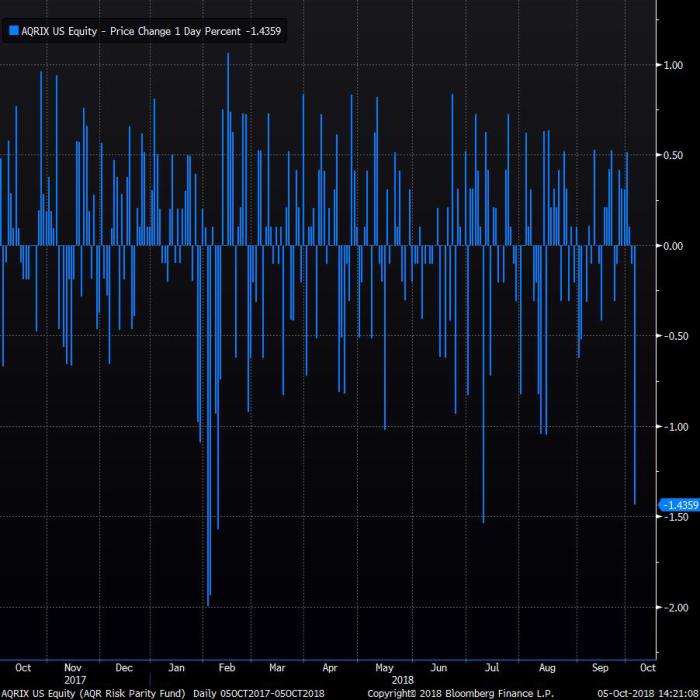 The distance to a monthly pivot is not far: 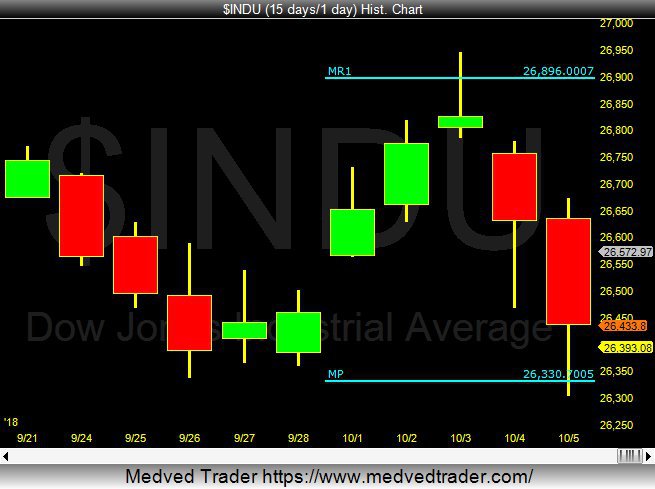 A bad warning comes from: 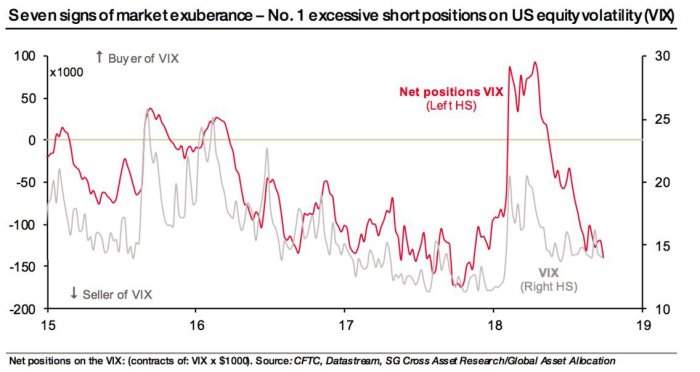 And the worst negative: 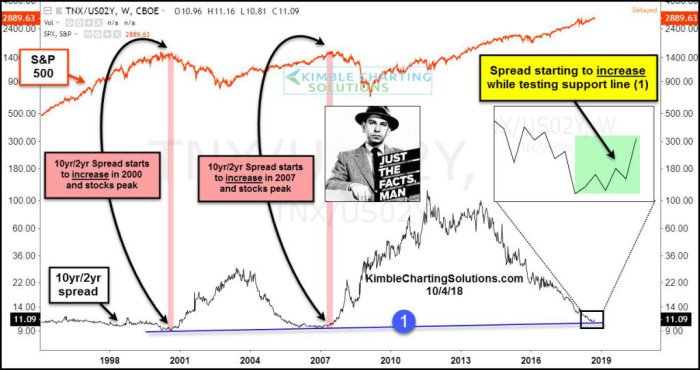 On Friday Tom Keene of BTV almost devoted a segment of his show to India and the Reserve Bank of India deciding to NOT raise rates. Urjit Patel, the governor said, protecting the Rupee was not part of his mandate. The Indian Sensex fell by 1,500 points in the last two days and the Rupee crossed over 74/$. But what about the Bank index? 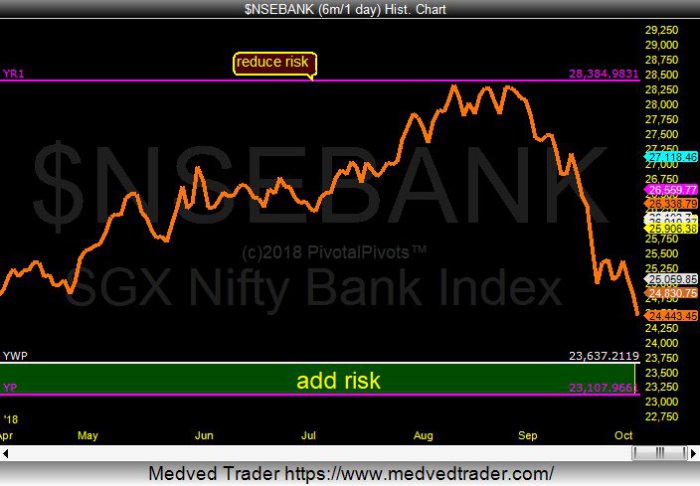 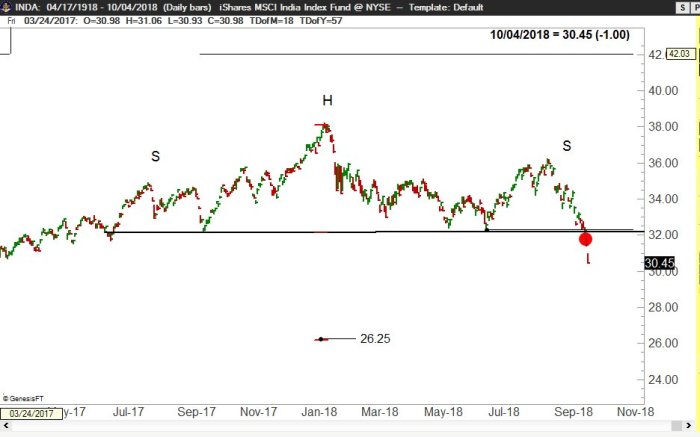 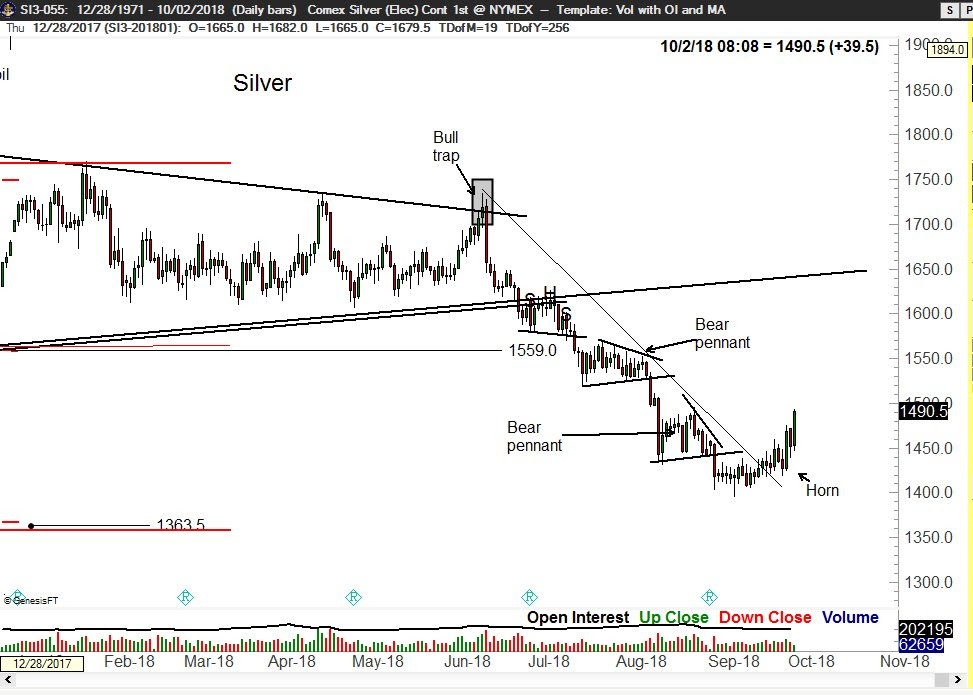 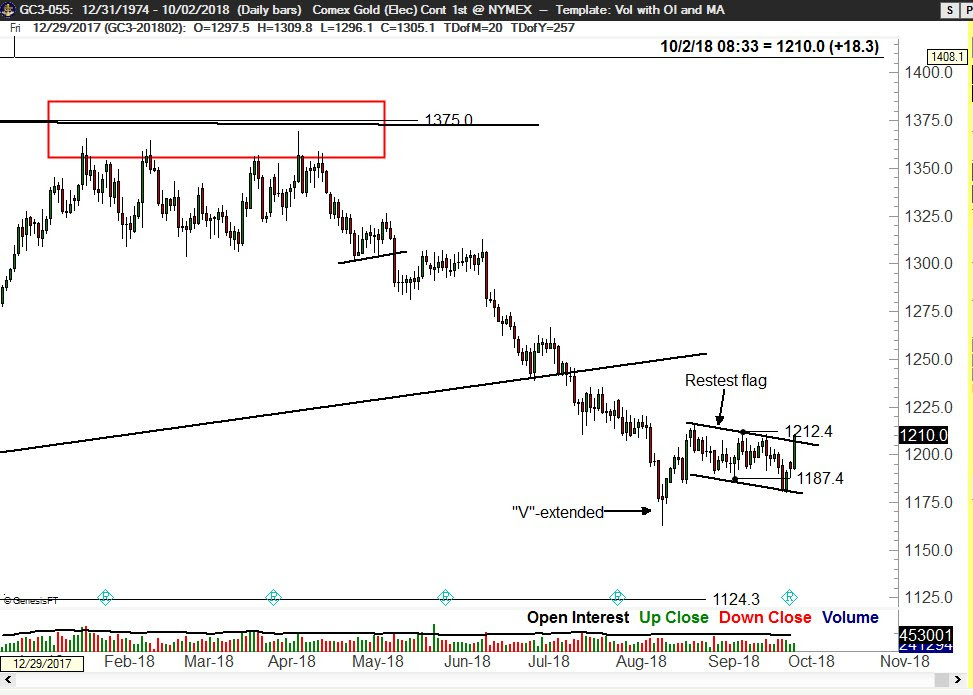 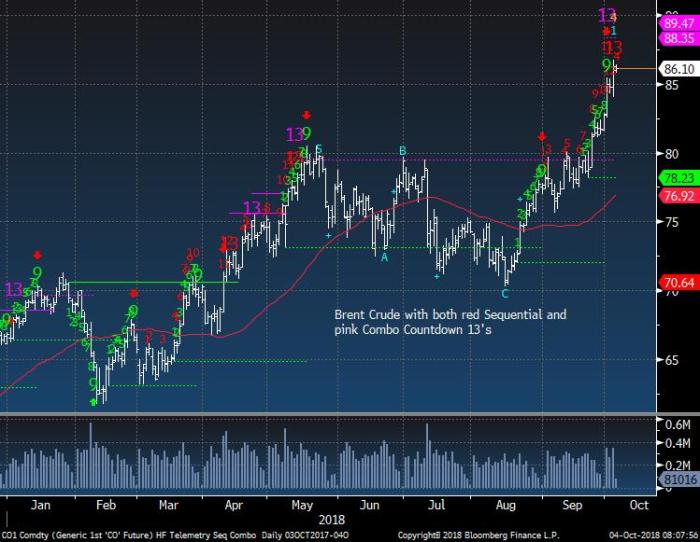