Friday’s Non Farm payroll report made up for whatever little weakness last month’s NFP showed – 250,000 jobs added, unemployment down to 3.7%, labor participation rate of 62.9% and above all 3.1% yr/yr wage gains. Actually the 3.1% number might be deceptively small:

We don’t think so. The markets took Powell at his word and immediately priced in a 4-handle federal funds rate & therefore priced in the entire Treasury curve with high 4 or even potentially 5-handle rates. That shock plus very heavy long positioning was enough to create fear & then carnage. Not only were absolute declines bad, but “the loss of momentum in the current selloff has been severe” as David Rosenberg put it.

We will see what Chairman Powell says in his FOMC statement this coming Wednesday. How he phrases the Fed’s intentions could prove pivotal. 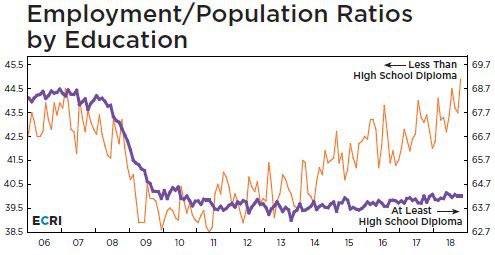 So in this case, President Trump has kept the promise he made to the low-education workers. But is that inflationary? Compare the action in the 30-year rate vs. the rest of the curve. The 30-year rate is the only rate that closed above its October 5 close on Friday. And what is the 30-year rate most sensitive to? Inflation. So where is inflation headed? 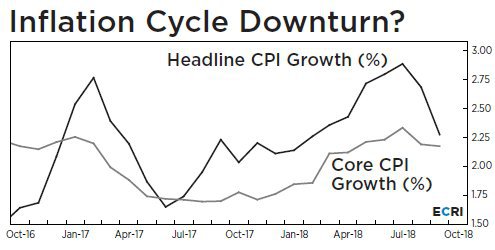 This means “ultimately yields should be heading lower, not higher” as Lacy Hunt of Hoisington Management explained in his conversation with Rick Santelli:

But what about the unemployment rate? Is that likely to halt its steady march too? 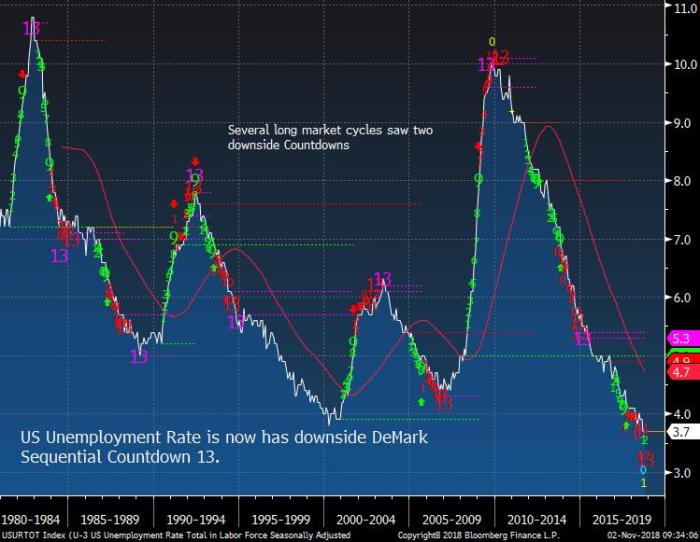 The last rate increase in the 1994-1995 rate hike campaign came in January-February 1995 and then rates fell during the rest of 1995 as if shot down in a barrel over Niagara Falls. That campaign of Greenspan vanquished the rise of inflation and created a disinflationary boom from 1995 to 1997. Chairman Powell mentioned this example of Greenspan in one of his early speeches. But will he follow Greenspan’s example?

We will see what his statement says on Wednesday.

Paul Richards of Medley Global Advisors has consistently warned about a binary outcome from talks between US & China. This week, Larry Fink said it clearly:

We all saw how seriously the US stock market takes this. After a big rally at the open went negative 200 points on the Dow, just one sentence from President Trump created a vertical 100-point rally. Is it likely that President Trump’s comments were intended for the midterm elections on Tuesday? Quite possibly. Yet, his administration could not send a false signal and hence the Kudlow backtrack.

We think protecting American edge & strength over China is an overriding goal of President Trump. He may weave & left & right tactically but strategically we think President Trump is serious. And his goal transcends the stock market.

Apart from China, the uncertainties about the midterms and the FOMC should get clarified next week, leaving Italy-Europe as the other big uncertainty. Just as Larry Fink is worried about US-China, Jamie Dimon is worried about sovereign debt risks from Italy-EU & Brexit. And the action in the DAX is testament to the binary outcome of such concerns: 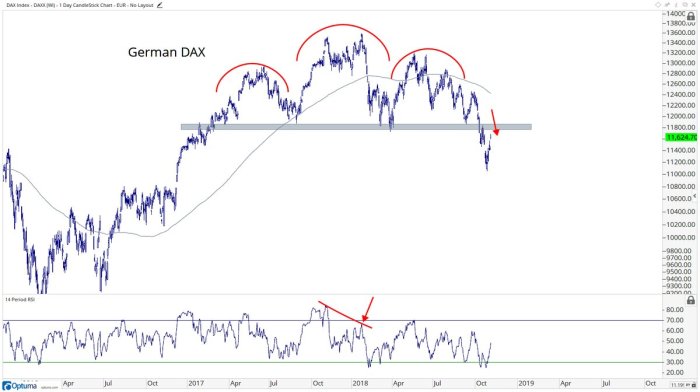 On the other hand, what do we know that is independent of these concerns? First, the improvement in valuations: 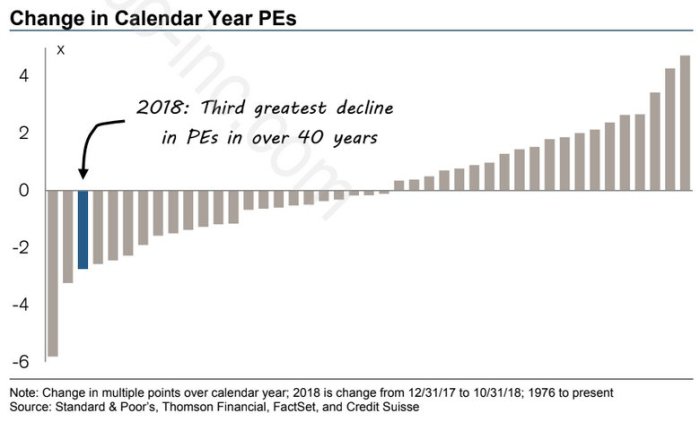 A more detailed table below:

This has been a great week for stocks with all broad indices up big – Dow up 2.4%, S&P up 2.4%, Nasdaq up 2.7%, NDX only up 1.6% thanks to Apple, RUT up 4.3%, Transports up 4%. Actually the rally was even greater on Friday morning, before the reversal late morning & afternoon. The question is how much of the bullish energy was used up? 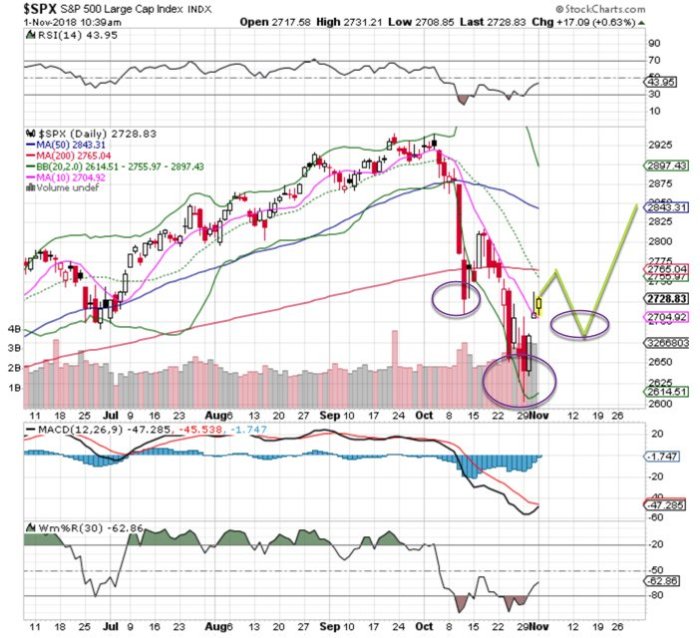 If a simple sell signal is not adequate, then a 2007 reference:

But doesn’t credit have to decline for a 2007 reference to even make sense? 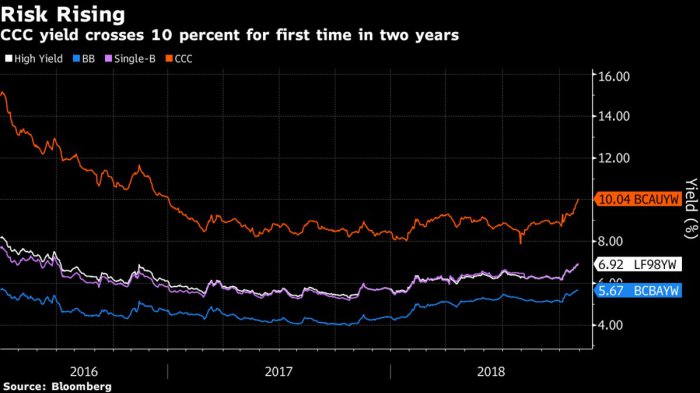 We don’t usually discuss individual stocks, but Apple is so much more than an individual stock. And besides earnings, Tim Cook said unit sales don’t matter prompting the tweet below:

Can you talk about apple without mentioning Isaac Newton? 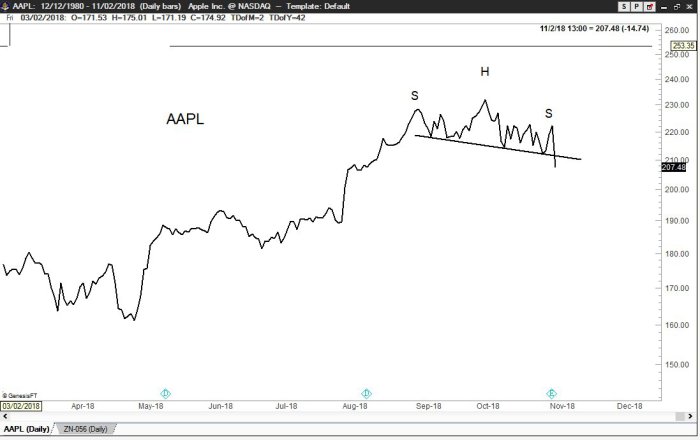 Emerging markets performed great this week, beating the S&P by over 200 bps. EEM rallied by over 5%, Korea by over 5.7% and even India rallied by 4.5%. This, according to Ruchir Sharma, will be the case when the new bull market begins. Some of his points from his live appearance on CNBC were: