Friday afternoon was just awful. Not that the first 4 days of the week were encouraging. Every single rally from Monday to Thursday failed. Still the indices were up for the week on Friday morning. But hope kept getting drained from the market as the selling slowly but relentlessly drove it out. Tweets & announcements of a big deal with China fell on deaf ears.

On the other hand, negative news kept being heard, assimilated & acted upon. The news about Michael Cohen and the speculation about what Mueller is doing or about to do became a factor late in the week. Then on Thursday, Chinese data came in bad &, all of a sudden, the idea that a US-China deal would eventually help was simply ignored. Brexit & Theresa May are now a sad parody and Draghi talking about ending QE in Europe was just sad.

As a result, the idea that the Fed might pause actually began to be viewed as bearish. That sentiment was perfectly captured by Jim Chanos in a less than 90 second clip.

You hear this fear just about everywhere. That is why we wonder whether it is already too late for Chairman Powell to announce a pause in his rate hike campaign next Wednesday. In fact, the markets have already priced in this expected pause & perhaps gone past it. Hopefully we are wrong but it is likely that a one & done pause next Wednesday might be another excuse to sell because Powell is too little too late.

There is no doubt the stock market is very oversold but that oversold condition & the resultant improvement in valuation is falling on deaf ears. Fundamentals are actually being dismissed as funnymentals. Hope is being extinguished by the relentless intra-day volatility while day/day moves in VIX are almost benign compared to the action. David Rosenberg attributed the volatility to a single factor “liquidity”. He may have a point that we think Chairman Powell should consider.

We think it is important for Chairman Powell to now shock the markets in the other direction. We think he should not only announce a pause in raising rates but also & more importantly announce a pause in the Fed’s QT drive. Meaning Chairman Powell should announce that contraction in the Fed’s balance sheet will be paused for the next 6 months or until the data rejustifies resuming it. He can allude to impact from upcoming tariffs, to Europe’s slowdown & to increasing signs of global slowdown.

Read the words of Chanos above – “slowdown they have seen in last 2 months in business“. What happened just over 2 months ago? Powell’s loose-lipped statement on October 3, 2018 about how we are “long way from neutral”. Hear Rick Rieder of BlackRock tell Maria Bartiromo (see below) how big that was; how  money managers had to react to the possibility of a much higher discount rate in their portfolios.

It was Powell’s bad and he has to catapult past it, not just fix it. The only way to do it is, as we said, explicitly announce a pause in QT. The medicine or antidote to such intra-day volatility is re-liquification.

But wait! Wouldn’t Chairman Powell be castigated for rescuing the markets again, for reestablishing the Fed’s put? Isn’t it the Fed’s job to manage the US economy and not markets? The Fed knows better. Ruchir Sharma warned a few weeks ago that global markets were about 3 times bigger than the global economy and that size imbalance had actually reversed the normal sequence. Meaning this time a crash or a severe fall in markets could actually cause a recession in the economy.

This week Pimco came in with a similar warning. They

Can you talk about a “global slowdown” without discussing China? Read what economists at City led by Liu Le-Gang wrote about China in their 2019 report:

Fortunately, the US economy is expected to grow at 2% in 2019 with inflation around 1.5%, according to Rick Rieder. What’s wrong with that, he asked Maria Bartiromo. In fact, we were stunned to hear this elite of the financial elite, the head of Fixed Income at the world’s largest asset manager, speak eloquently about letting people get higher wages and enjoy them without the Fed killing the economy.

Actually we wondered whether it was Larry Kudlow speaking dressed as Rick Rieder, especially when he said “wages doesn’t mean inflation“. In more detail, Rieder said:

The danger is that the Powell Fed acts like the Bernanke Fed in 2007 which never jumped ahead of the contagion that was spreading. Chairman Powell should learn from Bernanke’s mistakes. This is the time go long, Dr. Powell.  Raise rates by 25 bps and simultaneously announce a 6-month pause in BOTH rate hikes & in QT.  Otherwise see the contagion spread slowly but surely & get the recession virtually guaranteed by David Rosenberg.

Interest rates is the answer. Especially long term interest rates. In an ugly ugly week for stocks, the 10-year yield actually rose by 4 bps on the week & even the 5-year yield rose by 3 bps. The 30-year yield was flat on the week. Global slowdown, Ugly stock action, risk of government slowdown – nothing mattered to the Treasury market this week. Is it simply that the bounce from 2.82% last week has real legs.

Could it be the possibility of the Fed announcing a pause in QT? We don’t know & we know that we don’t know. But the Treasury market is sure acting as if at least a semblance of QE is back, yes Quantitative Easing.

Listen to Rick Rieder tell Maria Bartiromo ( near the end of the clip above) that it is now time to buy the 10-year Treasury and that 10-year Treasuries now could once again provide a hedge to stocks.

But is Mr. Rieder late to this call? Probably, based on the chart of Lisa Abramowicz of BTV: 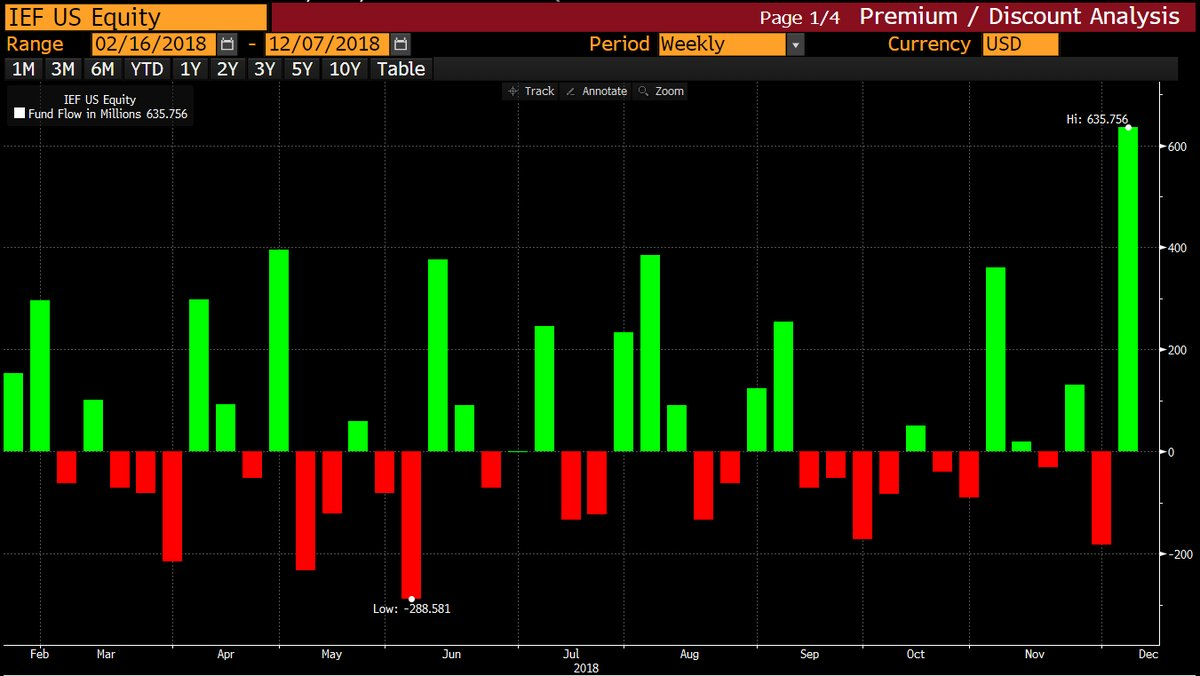 Where could the S&P go in the next 2 weeks?

Then you have the wearer of bonds as diamonds tweet: 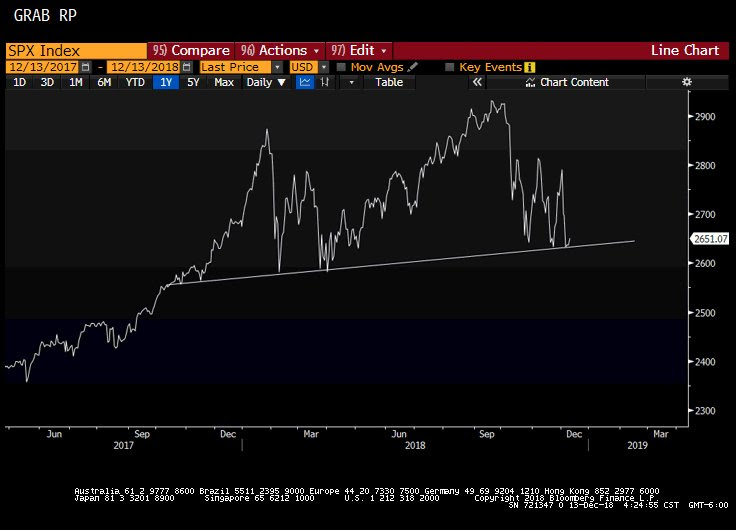 But what if Chairman Powell relights the candle of hope? Then we could see a “violent” and “crushing” move higher, to use the words of Nomura strategist McElligot.