1.”today they bent the knee”

What a perfectly succinct phrase from Josh Brown, a CNBC Half Time trader! That is exactly what Fed Chairman Powell did before markets. It was evident that he was seriously shaken by the fury of the financial markets & the criticism that was directed against him after the December FOMC meeting.That is why he needed previous Fed Chairs, Yellen & Bernanke, with him on stage to give him support.

But that was not enough. He had been so rattled by the carnage created due to his “autopilot” remark during his FOMC presser that he did not want to make any mistake of communication on Friday. So he brought notes and basically read off his notes.

His reversal was captured well by CNBC’s Sara Eisen who tweeted to the moderator:

The tweet summarized the huge shift in policy Powell enunciated on Friday – muted inflation; not only were further rate hikes data-dependent but their precious balance sheet normalization could also be put on hold if needed.

The stock market, already up almost 400 points because of Chinese cutting their bank reserves rate by 1% & the visibly strong Non Farm Payroll report of 321K vs est of 176K, rallied to above 800 points as they listened to Powell concede all the above.

Caveat Listener! Bending a knee is not handing over your sword in surrender. And Chairman Powell did sneak in a remark about markets being ahead of hard data. Remember all Powell said is that they would be data-dependent. Meaning the monthly reduction of $50B from their balance sheet continues until data makes them stop. So Powell did not pause the ongoing removal of liquidity. Also Powell could possibly raise rates in March if the data doesn’t fall sharply. And he specifically referred to the strong 321,000 jobs number of Friday morning.

So it behooves all to ask how strong was the employment number? What jobs were created in December? Trust David Rosenberg to cork the champagne bottle:

And what would just one scratch reveal?

For simple folks like us, ECRI’s Lakshman Achuthan posted a picture: 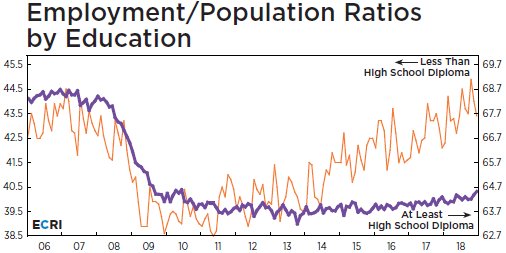 Look at the long term chart of WLI:

So what is ECRI’s central message?

We see a starker message by visually comparing today’s level of the above WLI to its level in Q3 2007, the quarter in which Jim Cramer ranted “they know nothing“. Bernanke did not pay heed to Cramer’s rant. And  the Bernanke Fed kept lagging behind the deceleration in economic data thereby perpetuating the contagion and creating the turmoil of 2008.

That remains our real fear for 2019. Powell’s statement about markets being ahead of hard data leads us to conclude he has only acceded to the pause to placate financial markets. He still is not aware of the economy slipping under him. So by the time he gets it and stops the QT & cuts the Federal Funds rate, it might be too late once again.

If you don’t believe us, read the summation of David Rosenberg for this past week:

Last week, we pointed out that the 5-year yield had broken below the 1-year yield and that the entire 1-5 year Treasury curve was inverted. With a up 371 Dow points week with two 90% up days, this Treasury inversion should have been reversed or at least corrected to a large extent, right?

Wrong. This week the curve inversion extended from the 1-5 year curve to the 1-7 year curve. Yes, despite a big rally in yields on Friday, the 7-year Treasury yield fell BELOW the 1-year yield this week.  What about the 10-year you ask? Look: 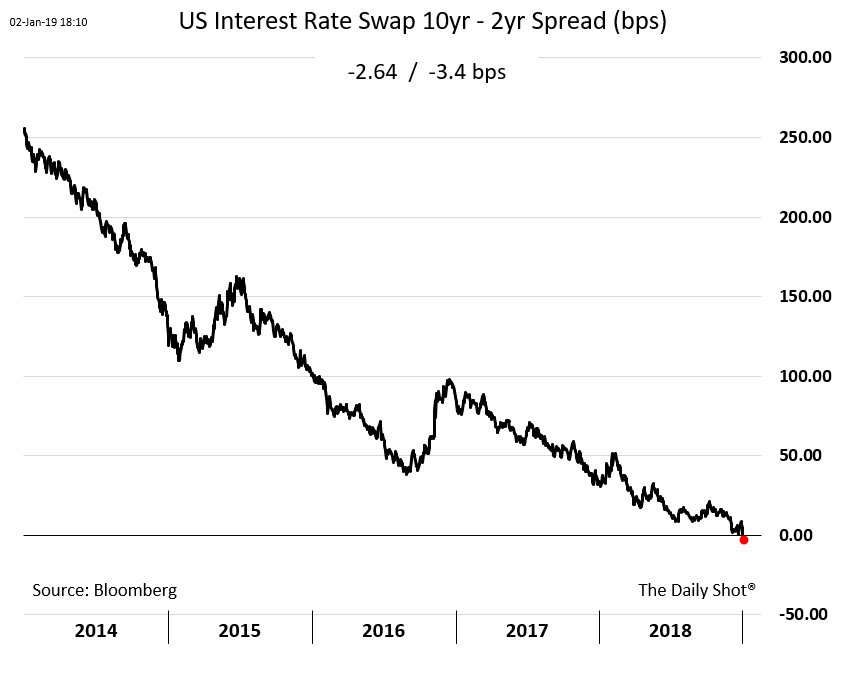 The Swap curve often leads the Treasury Curve. And the absolute levels of Treasury yields were down this week in a bull-flattening mode with 30-year & 10-year yields down 5 bps & the 2-year yield down only  only by 2.5 bps.

We hope the stock rally continues next week and interest rates rise at least a little & enough to reverse some of these inversion.

But is such a huge reversal in oscillators a good signal for the longer term?

Very comforting but a sample size of 3 and all non-recession years? What did Lawrence McMillan of Option Strategist write in his Friday summary?

Basically wait & see . So it might be more useful to wonder what might do well if stocks do indeed rally this year. An old dictum from a legendary name:

But does that really apply to something thoroughly forsaken? 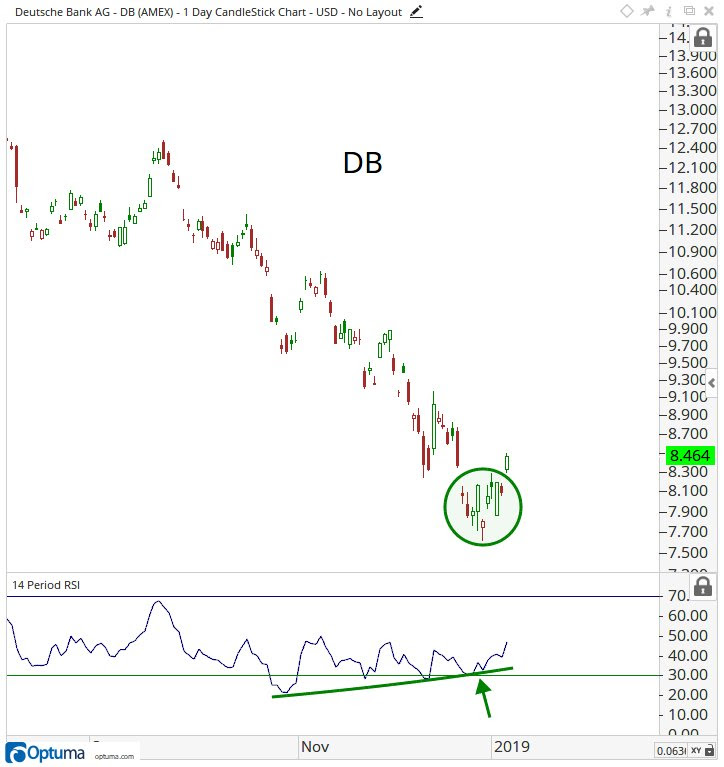 How about an asset class or a region? 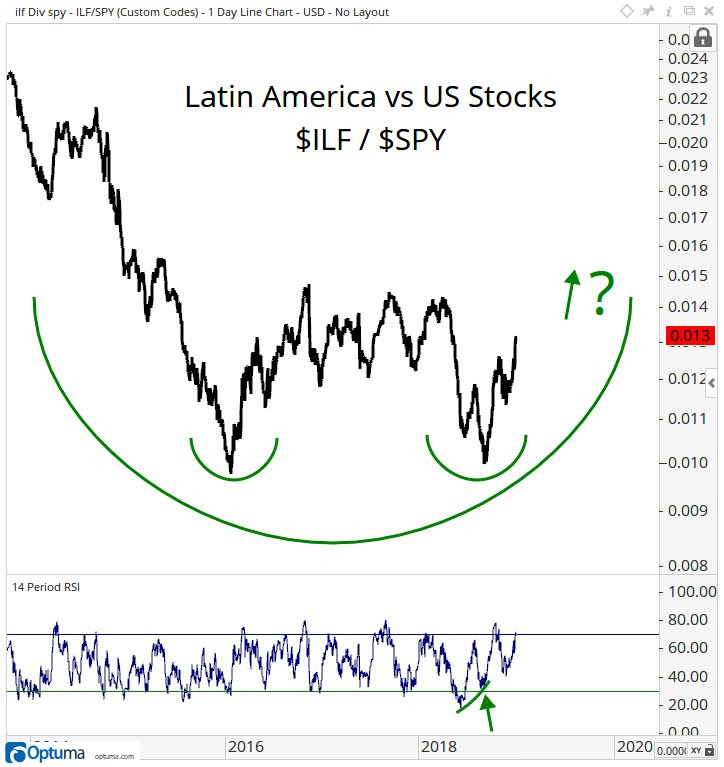 Does that apply to a commodity too?

It certainly did to Oil this week. Brent was up 8% and WTI was up about 6.8%. Energy stocks did very well too with XLE up 4.9% and the higher beta OIH up 7.7%. This rally also did something interesting: 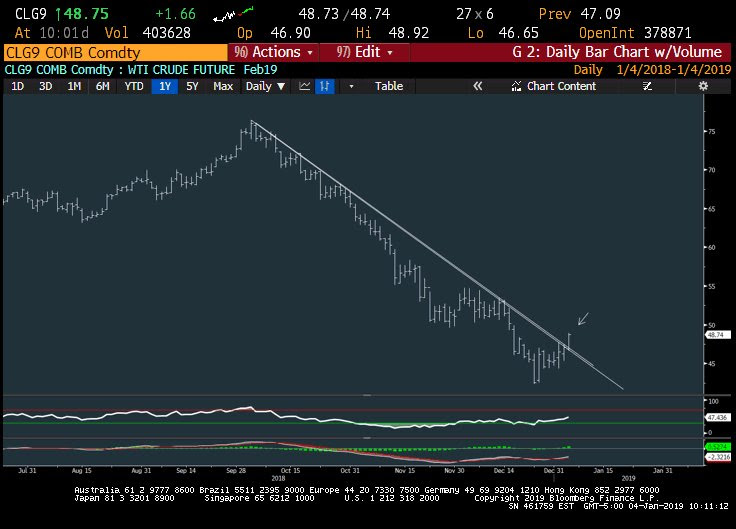