That was Steve Liesman’s reaction to the stunning 20,000 jobs added number in Friday’s Non-Farm Payroll Report. Perhaps he meant to sing “I’ve lost the moon While trying to count the dots“, dots meaning predictions of rate tightening by FOMC members. (forgive our liberties of replacing stars by dots).  Why? 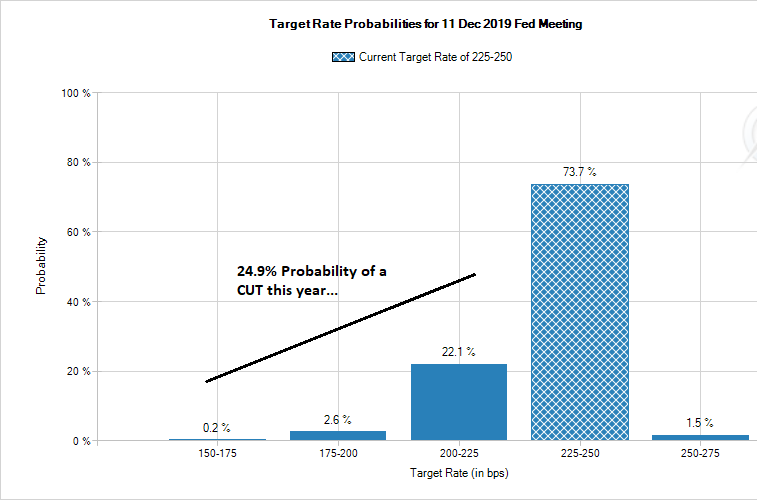 If you think this is crazy, read the following:

Was this all merely the impact of one component of one NFP number or was it the cumulative effect of a series of shocks? First could be the worst from a US consumer point of view: 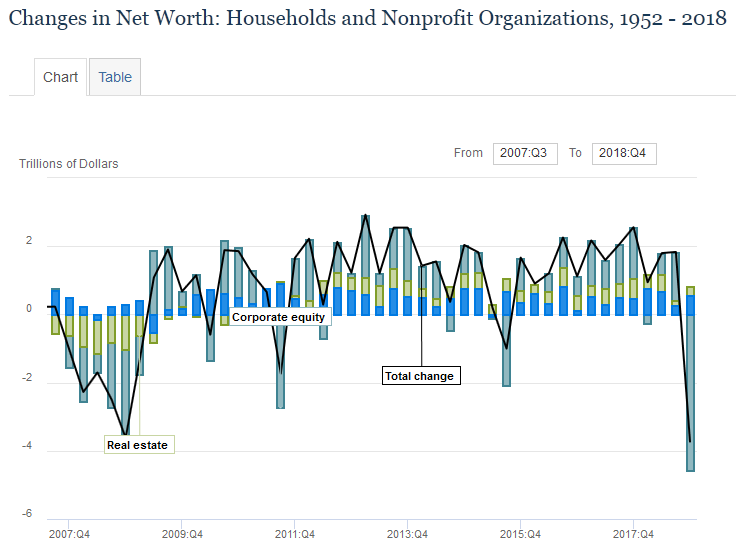 It might have been recovered in the year to date rally but is the mindset as sanguine as it was in September 2018? We doubt it. Very few consumers have forgotten the precipitous fall in the stock market from October to December 2018. They have no real idea why that fall happened. So when they see a massive rally, do they feel reassured or do they feel another fall could happen any time? Does this fear explain the below?

Then the data from China that showed a big drop in both imports by China of U.S. goods and a big fall in Chinese exports to the U.S. If that wasn’t enough, Draghi stunned the world by getting awfully negative on European growth prospects on Thursday leading to a 1-day fall of 1% in the Euro vs. the Dollar. Guess what that did to the 10-year German Bund rate:

What did David Rosenberg have to say about the NFP report?

How does it relate to the action in the stock market?

But all this is based on today’s data. What if tomorrow’s unemployment numbers turn for the worse? Isn’t that pure supposition? Or is there any one suggesting that? 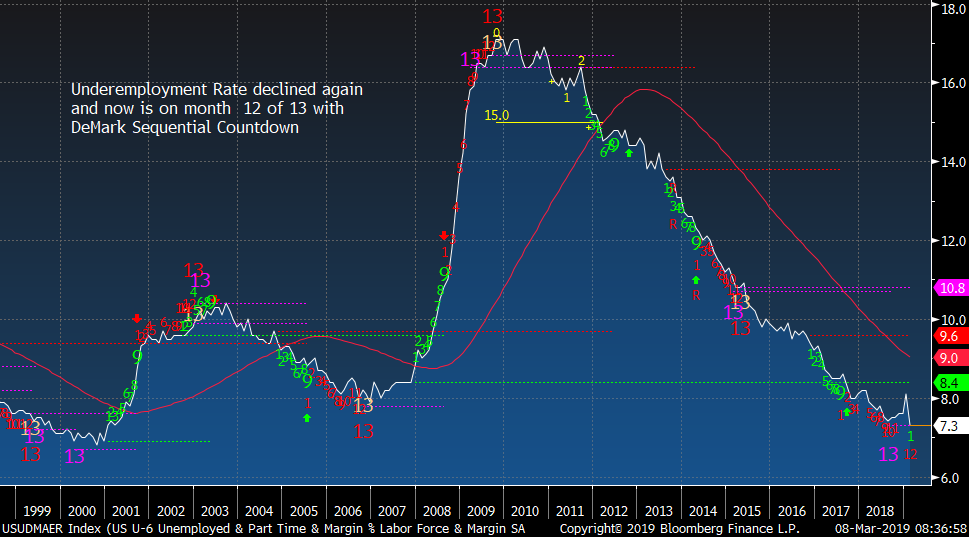 He is not alone. 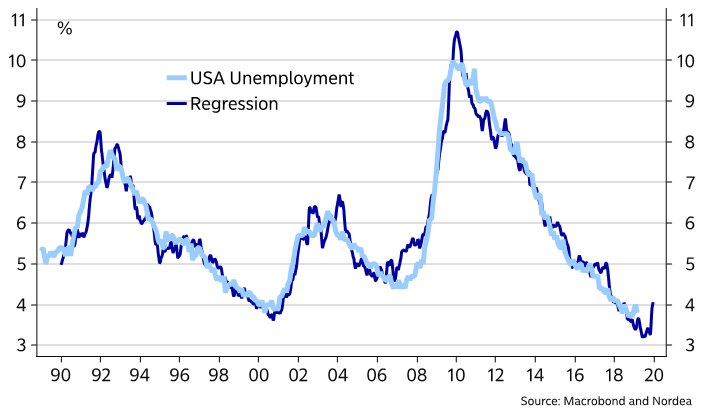 If you think zero% rates are nuts, read what Fed’s Williams said on Wednesday:

What might all that do to the 40 year stock-bond relative return? 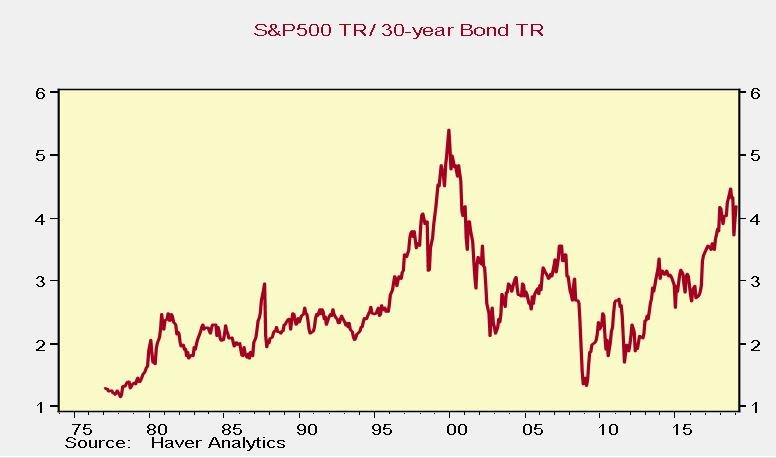 But haven’t we seen a big drop in rates on a Friday get reversed the following week? And note that the 10-year yield only fell marginally on Friday & bounced off of the critical support level of 2.60%. So is Anne Mathias, global rates & FX strategist at Vanguard, correct when she says “Fed should feel good about this jobs report” and Subadra Rajappa, head of US rates at SocGen, right when she says “bonds are overbought here” and that she is short Bonds? Listen to them yourselves:

Now listen to David Rosenberg arguing the recession ahead case and a topping process for stocks:

Carter Worth of CNBC Options Action says the S&P will at least touch 2600 and possibly retest the 2300 level. In fact, he said going to 2300 is “the best bet we can make“.

One Emerging Market was an exception to the above carnage, a market that has been among the worst performers within EM. Look at the year-to-date chart below of INDY, India’s Nifty index, relative to the S&P 500.

Was it because of the euphoria about finally taking down a Jaish-e-Mohammed terrorist camp or was it because the bold air force strike made PM Modi’s election chances much brighter? We will find out soon.

Given what Draghi did to the Euro, how can the U.S. Dollar go anywhere but up? And $DXY broke above the big 97 level. On the other hand, 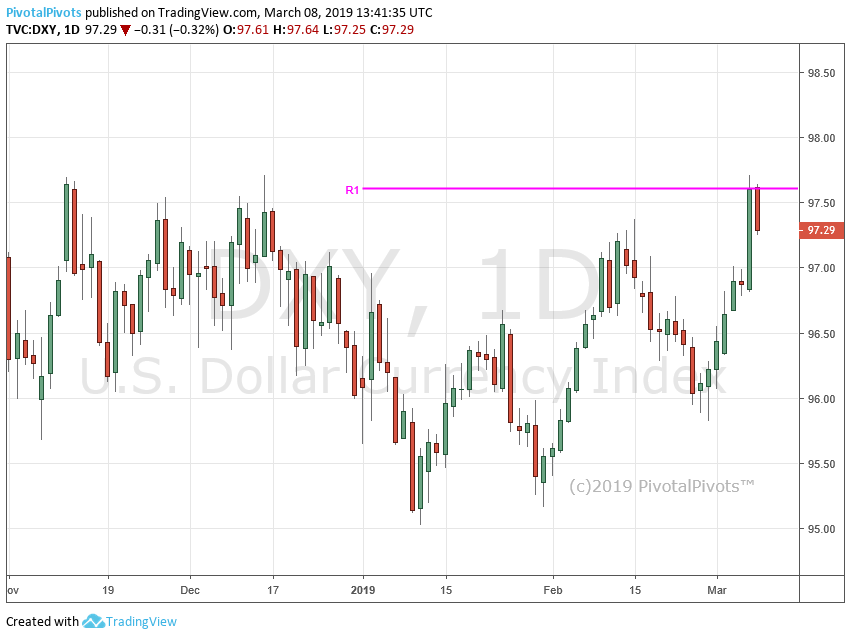 Next week should be quite interesting.