This week was dominated by the big global conflict of this period. President Trump shocked global markets last Sunday night by tweeting simply:

1.Back to Old Chinese Game

What brought this on? Reportedly, China took back some major concessions they had made earlier & sent back a new proposal by striking out sections of their previous agreement. This is an old practice for China. Initially they present a positive & conciliatory posture & agree to many of their opponent’s demands. Their opponents become happy & project a public aura of success. Then, as the negotiations proceed, the Chinese begin to retract their previous commitments believing their opponents would loose credibility & face by retaliating.

Another Chinese practice is to send a “chief” negotiator with a grand title, like Vice Premier of China in this case. Their opponents believe that the negotiator with a grand title actually has negotiating power but, in reality, all the decision making power rests back in Beijing. That has also been proven true in this case. Everyone now realizes that Vice Premier Liu He had little authority to commit China to anything material.

Add to this the arrogance & ignorance of Chinese leadership, including President Xi Jinping. The Chinese leadership truly believes that they are the most intelligent & sophisticated diplomats in the world. And their respect for America is quite low. And who can blame them? Look at the behavior of US diplomats towards China from the Obama & Bush Administrations. President George W. Bush allowed China to get into the World Trading Organization. China made lots of promises to secure this admission into WTO.

Then, in classic Chinese style, they violated all the agreements they had made and began a 17 year process of taking money from America & Europe and using much of that money to build a powerful military. By 2016, even President Obama was calling them the next global superpower & acting somewhat diffidently towards China (remember the Chinese did not allow President Obama to disembark from the front of Air Force One in Beijing).

China played the same game with President Trump, a waiting game. They did not confront President Trump in his first year. They promised to negotiate a new US-China trade deal and announced Vice Premier Liu He as their lead negotiator. They dragged the discussions with slow progress to keep President Trump from acting unilaterally. They were waiting for weakness to emerge in President Trump’s position.

Remember how badly the Chinese stock market was hurt in 2018, mainly because of the trade conflict with America. Just look at the 1-year chart of ASHR, CSI 300 China ETF, vs. the S&P 500. You will see how badly the Chinese market was hurt in 2018 compared to the S&P 500. President Trump broadcast this & kept saying publicly Chinese economy was getting badly mauled because of his tough trade stance on China.

So President Xi Jinping & his leadership team felt they now had the upper hand. They also felt that President Trump would not risk a rupture of the trade talks ahead of the upcoming 2020 election.

Perhaps most importantly, Xi & his team completely misread the meaning behind President Trump’s exhortations to the US Federal Reserve to cut rates now & that too by one full percentage point. President Trump also urged the Fed to begin the Quantitative Easing program used during the Obama Administration to stimulate the U.S. economy.

Therefore the time was right, they felt, to quietly retract the concessions they had made earlier. By doing so, they gave President Trump a perfect opportunity, an opportunity he was probably waiting for.

They gave President Trump the moral high ground to hit them hard. Read his second tweet which said China is attempting to renegotiate in addition to moving too slowly. Now this American President can say to the world, he tried to work with China but they didn’t play fair. Instead, they retracted. That’s a No-No.

So he hit back very hard & raised the tariffs from 10% to 25% on $200 billion of Chinese exports to America. That was last Sunday. Then, on this Friday evening, his Trade Ambassador released a statement that the “United States is preparing to raise tariffs on almost all Chinese imports that remain untaxed, valued at US$300 billion“.

Make no mistake. This action by President Trump, announced by him on Twitter, is a huge loss of face for President Xi Jinping & his leadership team. Nobody has done this to China. For the past 17 years, American officials have followed the Chinese face-saving protocols by talking privately while saying little publicly. Not President Trump. He publicly accused China of backtracking, itself a violation of Chinese protocol, and publicly retaliated by slapping massive tariffs on Chinese exports. President Trump served notice to China that he plays by American rules & China has to play by those rules. The whole world saw this & understood this public slap on China.

This was such a loss of face for Xi Jinping and the Chinese leadership that they blocked his tweets in China & even blocked the news of his retaliation. They could now allow the Chinese people to know what a big mistake they had made & how badly it had backfired on China.

The Obama Administration had bought the story that China was the next global superpower & it had to be accepted as such. That meant polite almost diffident behavior towards China & ignoring what Chinese exports were doing to middle America.

To his huge credit, President Trump understood that China’s rise was being paid for & sustained by America at the cost of American jobs. Sending $500 billion every year to China was the chief engine of Chinese economy and that money was being used by China to build a strong & powerful military to potentially wage war against America. Not just via money but even more importantly through coerced transfer of American technology to China.

In plain simple terms, America was creating a powerful & rich military & economic adversary and that too by letting them use American wealth & plunder American technology. How stupid is that? Suicidally stupid. That is not the way of making America great again; it is actually a way of making America pathetic.

So changing the trade balance between US & China is only the first step and that too an incomplete one. Because what China agrees to today, China can change tomorrow or in a new administration. So the Trump team is demanding China change its business practices by making substantial changes to China’s key laws & regulations.

The Trump team understands that these demands strike at China’s sovereignty and China will not agree to that. But they also know that without such an enforcement mechanism, any deal they strike would not be worth the paper it is written on.

Once you take this view, you realize that this game has been played before in Asia-Pacific. Back in 1930s, a resurgent imperial Japan was expanding into the Pacific with a strong navy. Control of commodities from South East Asia was a critical goal of 1930s Japan. Both objectives were, by definition, against American interests in the Pacific & North Asia. So FDR’s America drew a bead on that Japan and slowly began squeezing Japan economically. The pressure was tightened methodically & inexorably. That Japan didn’t want to change & didn’t want to accept a reduced role. We all know what happened.

President Xi’s China needs to relearn a lesson in American reality. China is now a bad word in America, thanks to President Trump. And his Democrat opponents are now even more anti-China than he is. Guess who wholeheartedly supported President Trump and even blessed last Sunday’s imposition of 25% tariffs on China – Democrat Chuch Schumer, Minority leader of the US Senate.

How dumb is the Chinese leadership? How did they not understand they were handing President Trump a moral high ground & the perfect opportunity to hit them with higher tariffs & become more popular by doing so. How popular? Look at the chart below from Larry McDonald of Bear Traps Report: 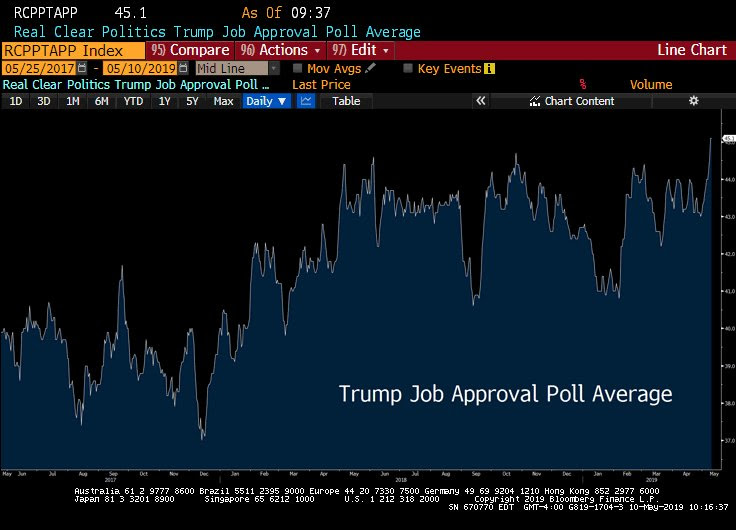 Thanks to China’s retractions this week, getting tough on China has become a part of Making America Great Again. And they think they are intelligent & Americans are dumb!