What has been a fairly reliable sign of tightening of global financial conditions? An abnormal strength in the U.S. Dollar. That usually results in a fall in growth currencies around the world and an exodus of capital into U.S. Dollar, Treasuries & Stocks.

But FinTV remained oblivious to this big story of the past week: 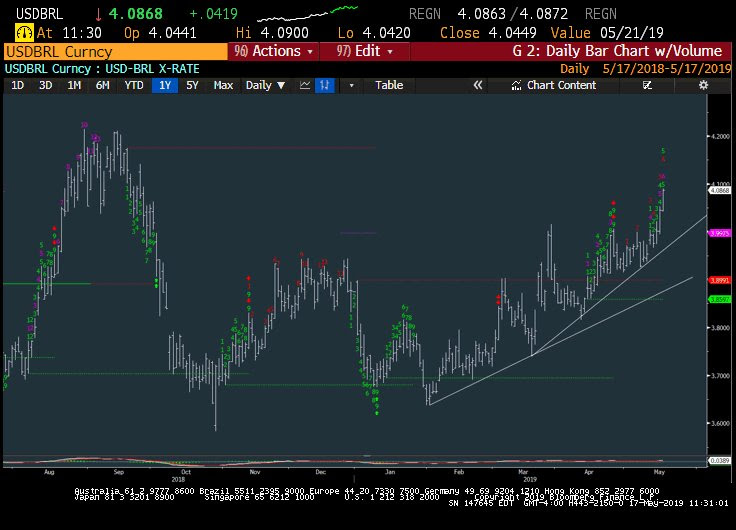 How close is the world to the next “destructive” phase? 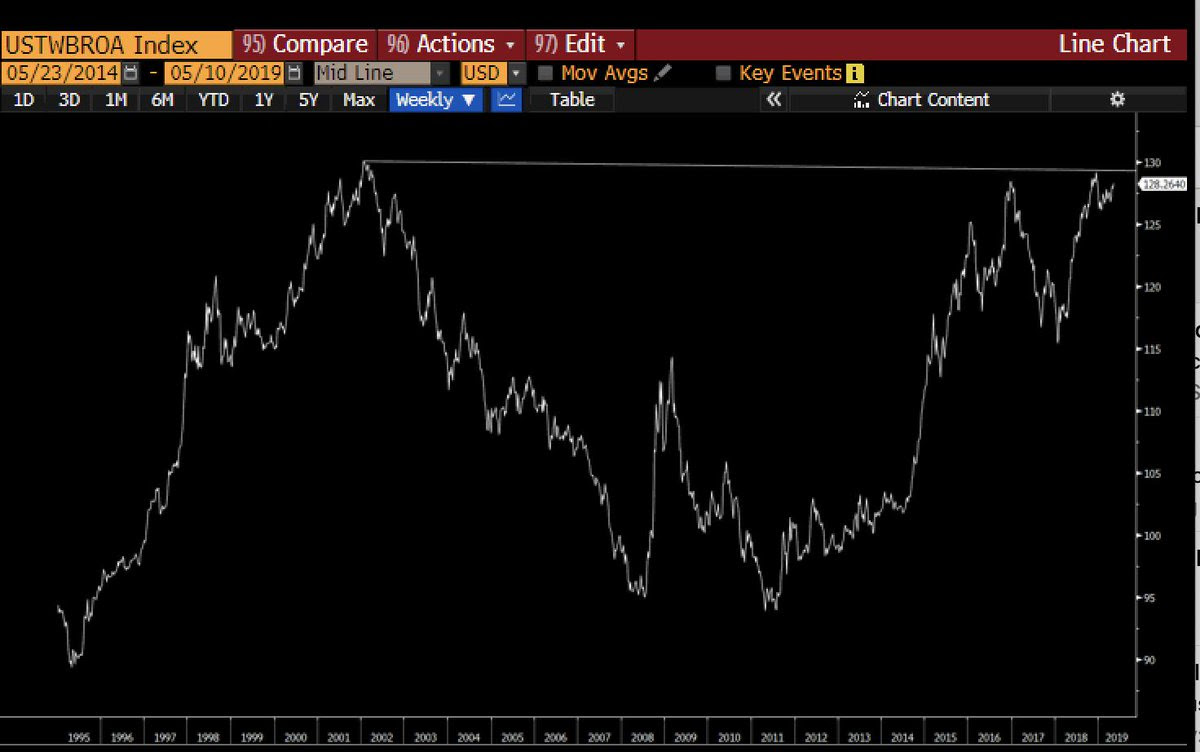 What about a broad FX index? From The Market Ear: 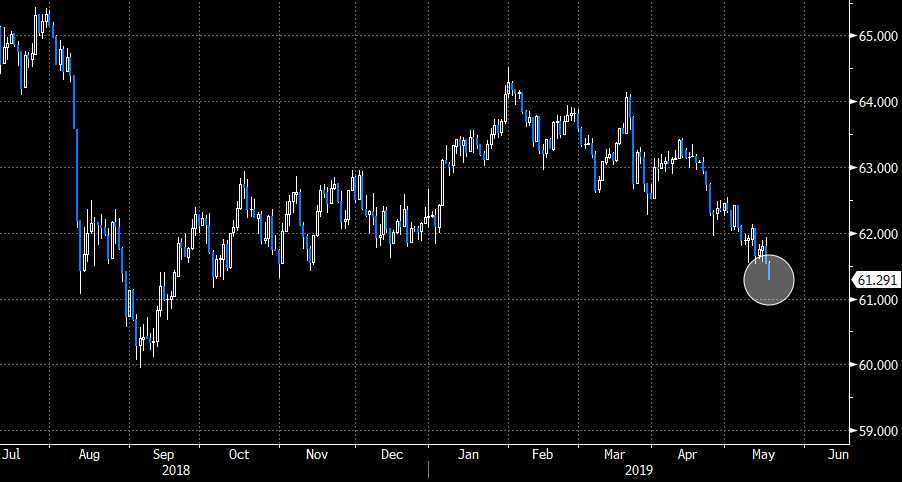 Is that what is giving speculators the courage to short despite incurring a negative 4.94% carry?

Ok, but what about speed of movement, or volatility as they call it? From The Market Ear: 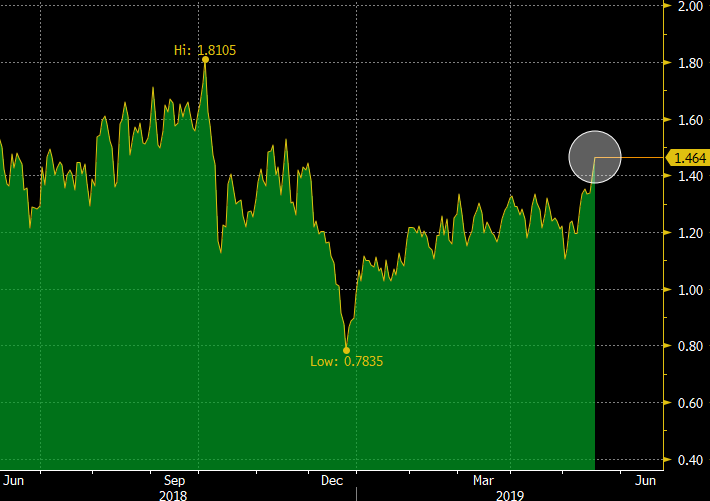 That is good news, right? Sort of a Tepperian affirmation of God looking after us & not after the Godless Chinese (actually a friend of David Tepper said that, per him on CNBC Squawk Box awhile ago). 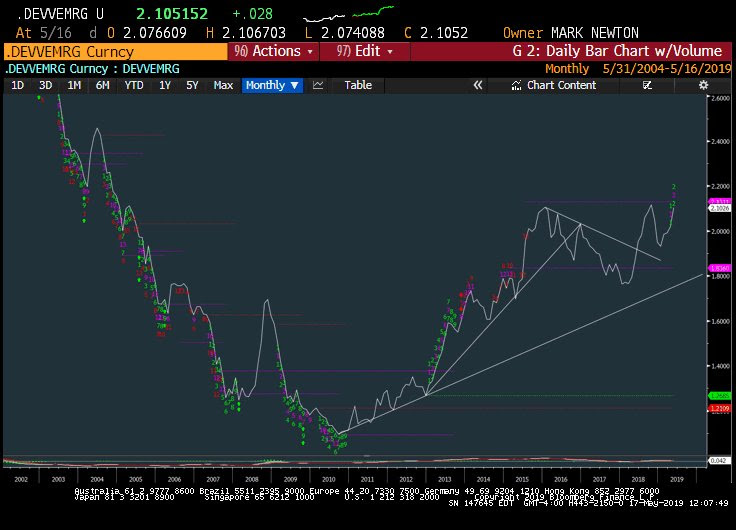 But then, you have spoil-sports, The Market Ear in this case, who keep writing like : 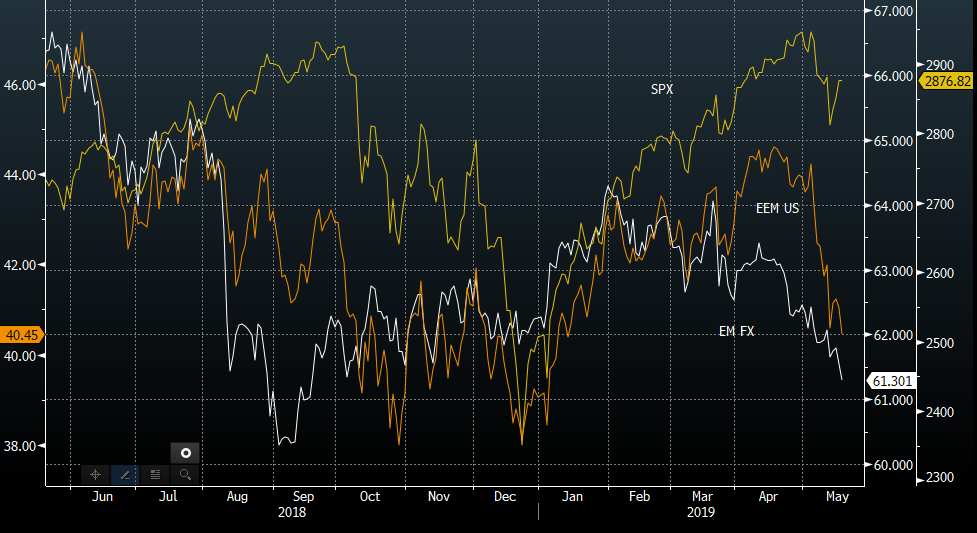 Yeah but is there any historical linkage between this EM-global stuff & good old U.S. manufacturing? From the same Market Ear guys: 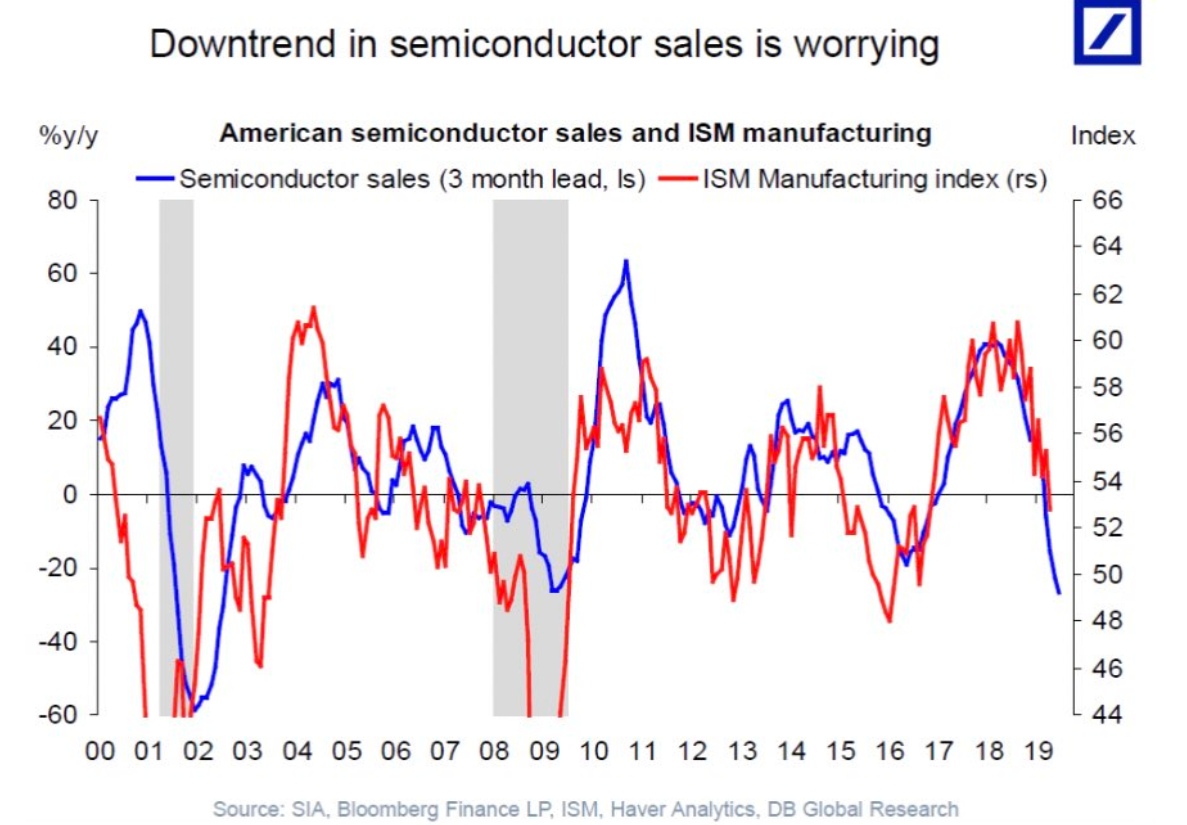 Yeah but we have seen such soft spells before, right? These are all buying opportunities unless we face a recession coming across the horizon.

Yes, we know the Fedales (our humble contribution to Spanglish & to Fed dialog; since Federales is already taken; Fedheads is too exclusive & not respectful) & their FinTV gang will come at us for merely mentioning the R-word. They are so smugly complacent in their conviction they need to do nothing. But what about their own data, in this case from San Francisco Fed, courtesy of The Market Ear: 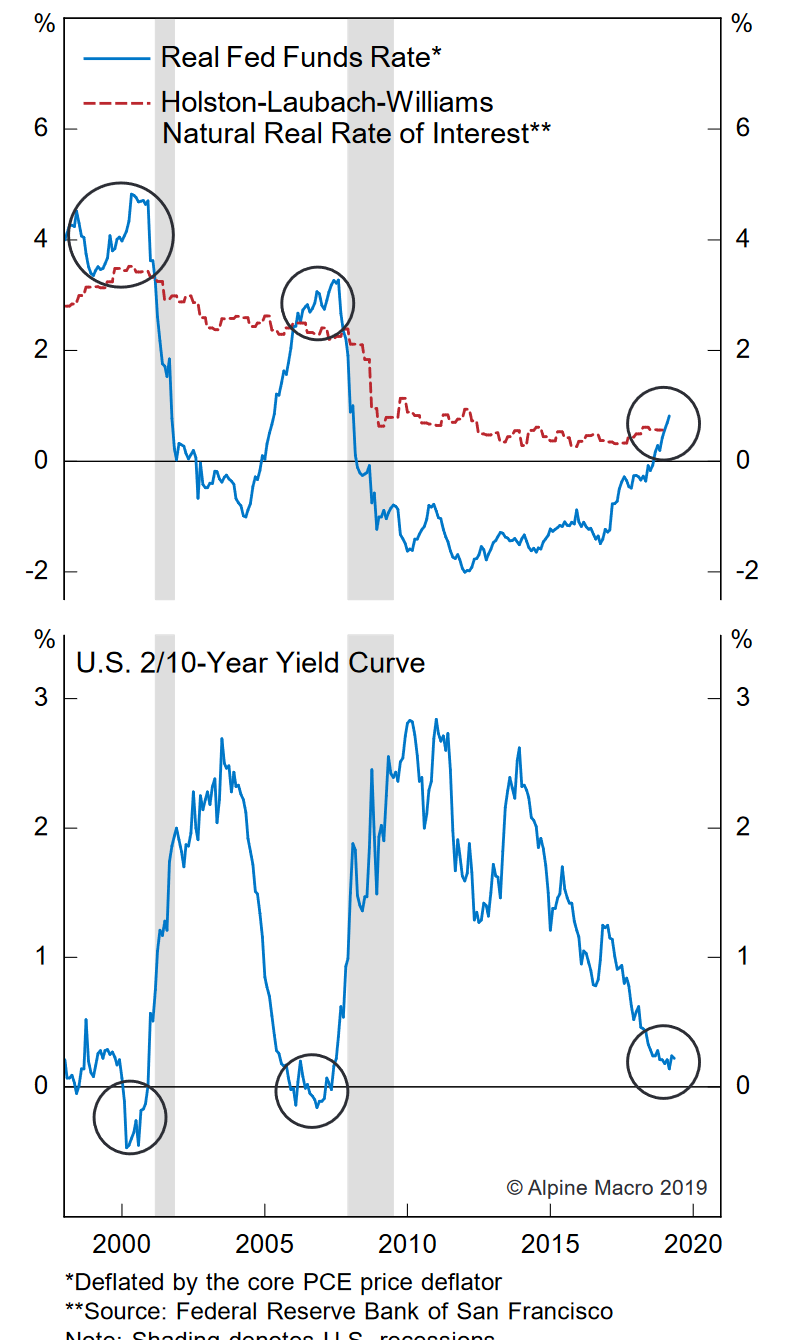 Yeah but didn’t we all see what the Leading Indicators are doing? That means smooth sailing for as long as the eye can see, right? Not according to, 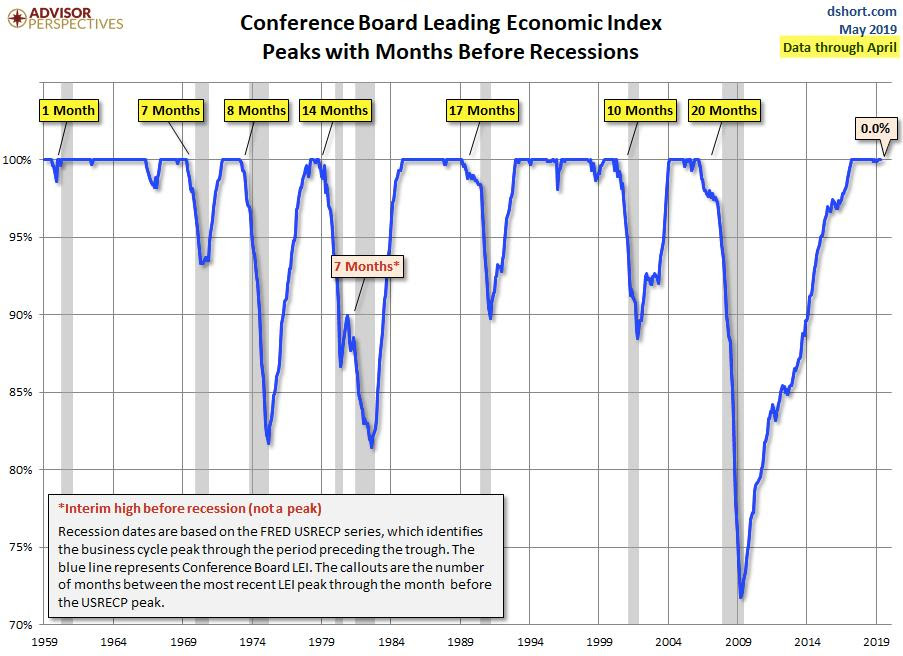 But didn’t we all see the yuge Michigan sentiment number? Who can un-rosy that?

Speaking of as far as the eye can see, look below at what the New York Fed showed: 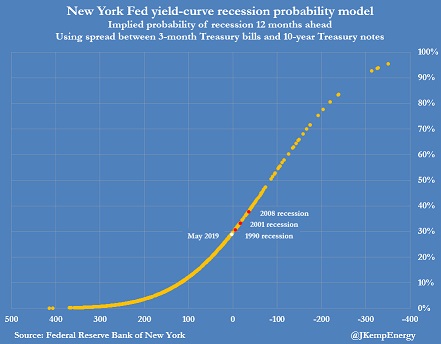 Wow; how close are? And Jeff Gundlach is about twice as bearish as the NY Fed:

David Rosenberg was more sure & more bearish in his address at the John Mauldin Strategic Investment Conference this week:

So far, Rosenberg and Gundlach are on the same page. They both warn about the corporate bond bubble. But Gundlach thinks long maturity rates could rise because of the deficit. In contrast, Rosenberg actually recommends:

The Treasury curve kept falling in yield this week with the 3-7 year sector falling 8 bps & the 30-year yield falling 6 bps. The 1-month yield is still higher than all maturities up to the 10-year &, only thanks to the UMich sentiment report, the 3-month yield closed at the same level as the 10-year yield.

CNBC’s smart & sensible Mike Santoli said on Friday that the bond market is “screaming for a rate cut” while Scott Wapner of CNBC Fast Money Half Time raised the possibility of the Fed actually raising rates. The latter’s comments actually raised an intriguing question. Look at the chart from The Market Ear: 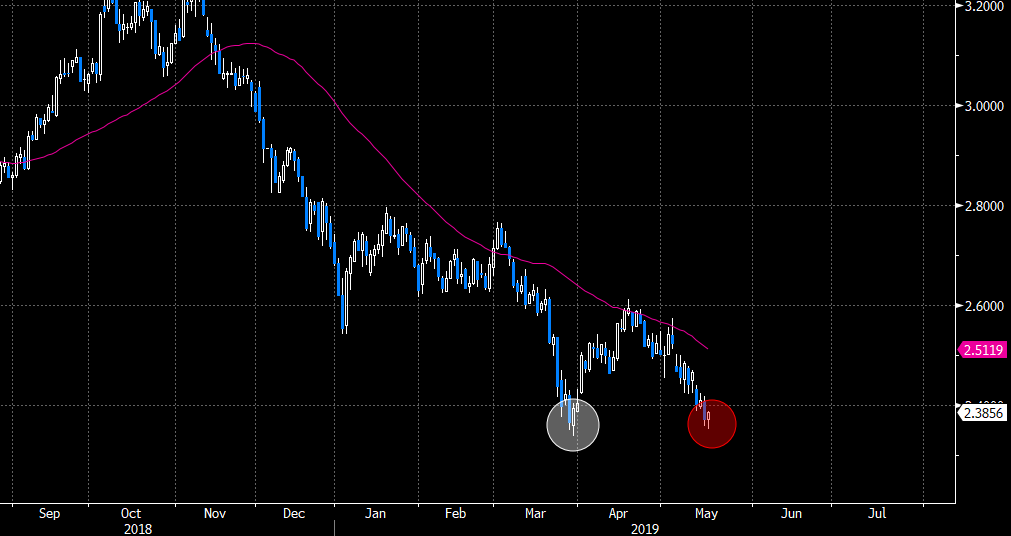 During the first bottom near the end of March, CNBC Fast Money, & most of FinTV, were engrossed in curve inversion discussion. In contrast, this week very few discussed that and, as we said above, CNBC Fast Money kept talking about rate hikes by the Fed.

If the 10-year yield rises above 2.40% & stays there, then the curve inversion warning could be diluted for the near term. And this week’s impulsive decline in yields could create a snap back in yield. Also, as Gundlach warned,

And Chairman Powell is scheduled to speak on Monday & the Fed minutes are out on Wednesday. Based on what Dr. Brainard & Dr. George said this past week, we expect Powell to stay the course & say how happy they are to be in this perfect “no rise no cut” position.

On the other hand, Fin TV & especially CNBC Fast Money tend to be wrong at important junctures. And the global action in bonds points to massive downward pressure on US yields. 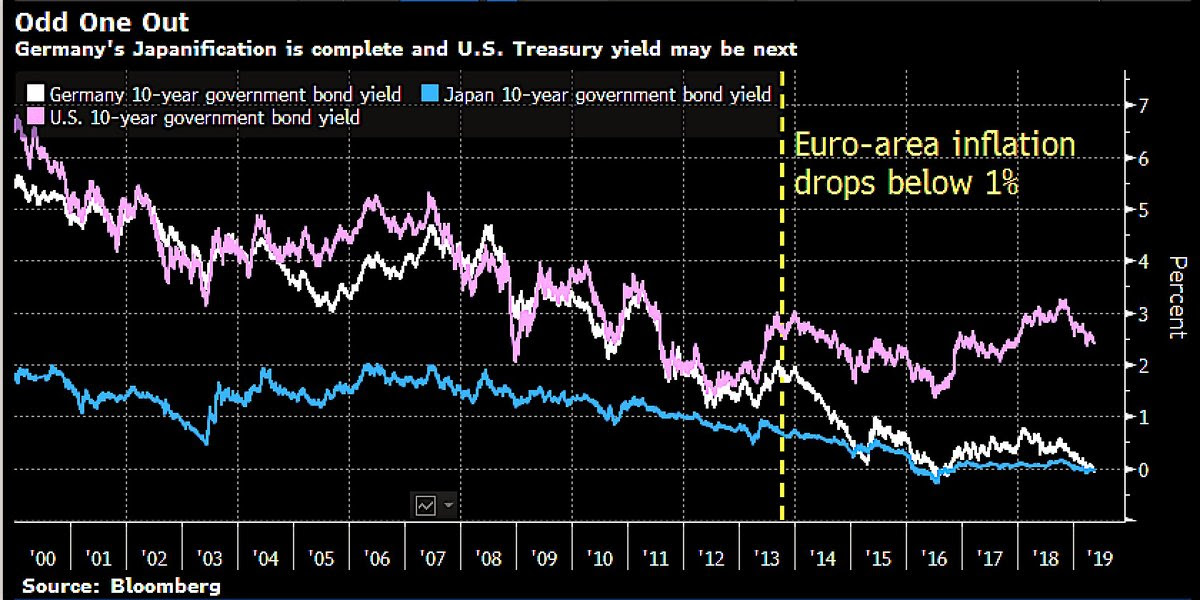 Trust Mohamed El-Erian to point to the fallacy in the above chart:

When you consider 10-year yields minus central bank rates, the Fed has put America into the same basket as Germany & Japan. In other words, the Fed is leading America into a Japanification. How does the Fed convert this above chart into the above above Holger chart, the way it should be? CUT the Federal Funds Rate.

Germany & Japan are mercantile, export-dominated economies. They are in the current anti-trade cycle. America is a relatively closed domestic consumer spending economy. Yet, excessively high Fed Funds rate is Japanificating the American economy.

The Fed always tells us that the bond market is wrong & that the market doesn’t understand the Fed. Who in the end is proven to be wrong? The model-driven Fed just like January 2019. Will it happen again? We think so. When? After the Fed puts the U.S. economy into a recession again.

And what about Powell’s “transitory” label for inflation? 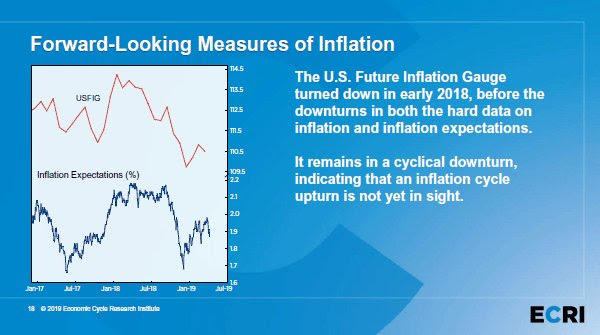 To put Financial Media comments about the bond market in a 10-year perspective, 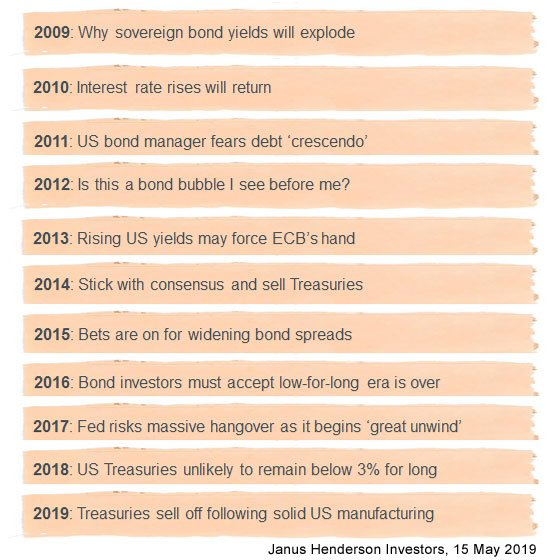 The selling of U.S. stocks seems to be originating overseas, perhaps due to the action in their own markets:

And the action in May seems consistent with seasonality:

But Detrick did warn CNBC’s Brian Sullivan that, pre-election years, have seen a 10% correction mid-year. And 4-down weeks are ok but apparently 5 down weeks tell a different tale: 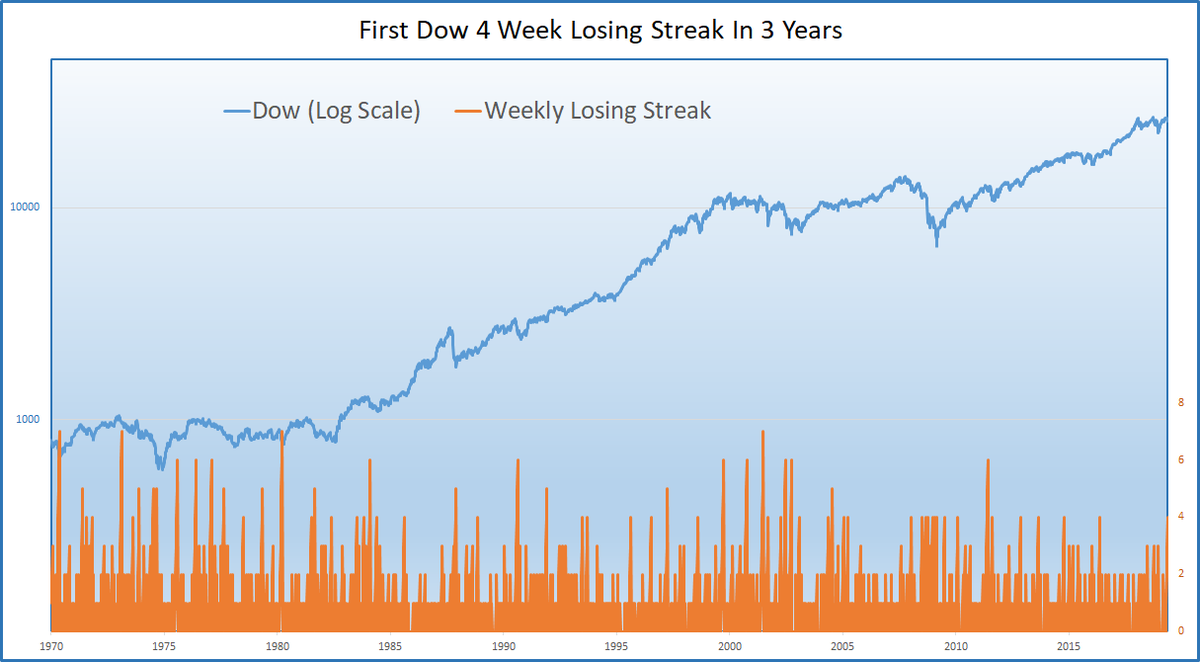 Given all of the above, what’s a body to do? An ancient Sanskrut proverb considered the same confusion – different texts tell you different solutions; different gurus give you different advice. So the proverb says,

Mona Mahajan of Allianz Global has not been on Fin TV recently. So we turn to the path recommended by another mahajan,

This past week was dominated by China-US trade news. Lest we all forget, something important & positive happened regarding trade on Friday. We will let another mahajan tell it: