There are certain decisions which, if taken in arrogant haste, can prove disastrous in the long run, almost irreversibly disastrous.

The greatest modern example of this truth is the one-child policy implemented in China in 1979. It seemingly made so much sense in that era, an era in which overpopulation was deemed a curse on poor nations. So China, in fact China of the wise brilliant Deng Xiaoping, established & implemented a one-child policy. Now 40 years later, China faces a demographic crisis; the country is now expected to be get old before it becomes wealthy or powerful. The Chinese Government is now trying unsuccessfully to persuade its women to have more children.

Putin’s folly that we discuss in this article is much smaller in scope. But its impact is now clear and very negative for Putin’s & Russia’s military & geopolitical future.

The Soviet Union began going global in their competition with the United States in late 1950s. Financially they could not compete with America but they used America’s mistakes to build important inroads and to support their own military buildup. Nothing works without money and even America cannot support its great defense companies solely with American orders. So export of expensive military equipment is the key to every country’s military development.

America in the 1950s (& for many decades after that) had chosen NaPakistan as their “ally” and supported that regime in its continuous war against India. That India was poor, much poorer than today. And that India needed a reliable supplier of military hardware and, equally important, military technology. Soviet Union stepped in and it became a marriage of almost heavenly convenience. The Soviets got a large customer, a customer whose needs & ability to buy grew with every decade and India got a reliable supplier of modern weaponry & technology.

The Soviets sold heavy tanks, armored carriers & then in 1960s allowed India to build MIG-21s in India. They sold and enabled India to build warships to enable a fledgling Indian navy to patrol India’s huge coastline & naval sphere from the Straits of Malacca to Straights of Hormuz in the Middle East. And the Indian military became the best advertisement for the efficacy of Soviet weapons. In every conflict with Napakistan, the Indian military used Soviet fighters, tanks & artillery to destroy more sophisticated & more advanced American weapons supplied to NaPak. (that pattern was repeated a few weeks ago when an Indian MIG- 21 shot down a US-supplied NaPaki F-16 in a dogfight, the first such recorded kill in military history).

So, per Wikipedia, “on 20 January 2004, after years of negotiations, Russia and India signed a deal for the sale of the ship. The ship would be free, while India would pay US$800 million for the upgrade and refit of the ship, as well as an additional US$1 billion for the aircraft and weapons systems.” 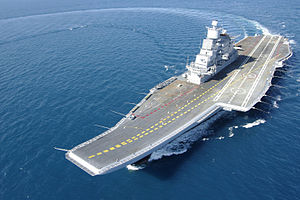 The other big success of the pre-Putin era was BrahMos, today’s “fastest anti-ship cruise missile in the world “with “Mach 2.8-3.0 speed“.

In 1998, the Indian & Russian governments formed BrahMos corporation with India owning 50.5% stake & Russia owning 49.5% stake. BrahMos now has Air-launched, Ship-launched & land-launched versions that are both anti-aircraft & anti-ship. (“Brah” from India’s Brahma-Putra river & “Mos” from Russia’s Moskva river). And “a hypersonic version of the missile, BrahMos-II, is also presently under development with a speed of Mach 7-8 to boost aerial fast strike capability. It is expected to be ready for testing by 2020“. 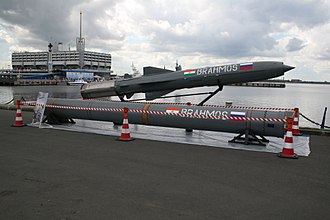 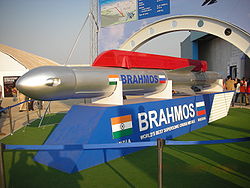 Given the success of joint Indo-Russian BrahMos, India signed an agreement with Russia to jointly develop a fifth-generation stealth fighter, the SU-57. Perhaps the success of BrahMos doomed this joint venture, with the Russian side reportedly dragging its feet on joint technology development & sharing. Finally, last year India withdrew from this project.

India may not lose much by withdrawing from the SU-57 venture. Today’s India is the fastest growing economy in the world & is expected to remain the world’s largest arms buyer over the next ten years. And today’s India has far better relationships & even partnerships with the West.

What about Putin’s Russia? As Stratfor wrote this past week,

And India’s withdrawal from the SU-57 program is only one example of India’s turn away from Russia for major long-term military orders. Though the power of the Indian Air Force is still based on Russia’s Sukhoi air-dominance fighters, India has not shown a serious interest in buying MIG-35 or the next generation Russian aircraft.

What has this done to the Russian Aerospace industry? Stratfor writes,

Meanwhile the Indian Navy, whom Putin’s Russia squeezed in the 2004 aircraft carrier deal, is now building their 3rd aircraft carrier. And their indicated preference for fighters for that carrier? Boeing F-18s & the Naval Rafale of Dassault. Russian fighters are not even being considered.

What does this to do to Russia’s own military modernization plans? Stratfor writes,

But Putin’s travails have a real warning for America. A Russian defense industry in real trouble could end up being swallowed by China and that would make China a far more dangerous adversary for the US Military.

Think back to the 1930s. Had that Russia fallen to Hitler’s Nazis, the Allies might not been able to defeat that Germany. So FDR’s decision to help Stalin with weapons, materials & money ended up helping America reap major benefits & allowed a two-front war against Hitler’s Germany.

Today’s Russia & China share a very long border and neither nation trusts the other. But if Russia & China end up as allies in a conflict against America that begins in South China Sea, it would be very costly & exceedingly dangerous for America. How difficult would it be for today’s America to simultaneously fight China in Asia and fight Russia in Europe? And, unlike in 1940s, today’s Europe is virtually worthless militarily against Russia.

We now see what Putin’s arrogant folly has done to Russia. We should not now repeat that arrogant folly by forcing Putin’s Russia into China’s arms. It seems President Trump understands this but we are not sure many others do.