Remember the notorious Maginot line defense of the French in 1939? The French were so confident that the line would protect them against the next German attack? That is what we remembered when CNBC’s Steve Liesman spoke this week about the determination of the Fed to maintain their process & discipline.

Guess Mr. Liesman has not heard of the John Madden dictum “speed kills”. Clearly the WWII French generals had not. Because the blitzkrieg of German armor left the French & their Maginot line standing shocked & bypassed. The extremely fast fall in Treasury rates has left the previously determined FOMC just as shocked & helplessly bypassed. Their Federal Funds Maginot level of 2.5% now stands so far behind & so completely worthless that Pimco warned the Fed is about to lose control of markets.

Yet Steve Liesman is undeterred at least on air and kept up the brave appearance of the Fed as laboriously & methodically steering an ocean liner. He was trying to deflect Rick Santelli’s sensible suggestion of cutting rates now & then taking that cut back if the need for it is reduced in the fall. In his proud role as the Fed’s voice on CNBC, Liesman dismissed such pragmatic practicality in his iron clad confidence about the Fed’s model-driven firm hand.

Remember what John Williams, the CEO & President of NY Fed, said last Friday, May 24? That he didn’t see “any strong argument today” for “an interest rate move”.  He has changed his tune . Look what he said in his speech this past Friday, May 31:

Remember what Goldman Sachs had written last week – ” … market pricing of Fed easing appears to be almost as stretched as it was in late March. Current rate cut pricing appears excessive ..” They seem to have changed their minds too by this Friday. They were not alone. As BTV’s Lisa Abramowicz & Jonathan Ferro wrote –

And they answered it too:

What did Raoul Pal, the man who said “Buy Bonds, Wear Diamonds” weeks ago, write this week?

But does Raoul Pal know the Fed as well as Steve Liesman does or as Mohamed El-Erian suspects? Mr. El-Erian knows what the Fed must do:

The above he knows but what does he suspect?

This is why Steve Liesman so quickly & contemptuously dismissed Santelli’s suggestion of a practical cut now that could be taken back if appropriate. That would be a flip-flopping Fed. That would be anathema to the Fed’s self-emphasized belief in the “infallibility” of their models.

Remember El-Erian is an erudite, soft-spoken professor. In contrast, Guggenheim’s Scott Minerd was a marine. He had no problem in speaking candidly about the Fed’s real sensitivity on CNBC’s Closing Bell:

Steve Liesman knows this. He understands that the real mandate of the Fed is to maintain their institutional credibility and not the price stability or jobs/economy mandates given to them by the US Congress. Now if the US Military signaled that maintaining their own credibility was more important to them than winning the war they are fighting, they would be fired and/or court-martialed. But when the Fed does so, they are proudly maintaining their independence from the President.

And that means determination in not admitting their mistake & even greater determination in sticking to their model-driven path of dismissing the President’s comments even when he is right. Who essentially said this on Friday? A man who disagrees with President Trump on virtually everything – David Rosenberg

Who else thinks so? And when should the rate cut cycle should have begun according to this proven analyst? 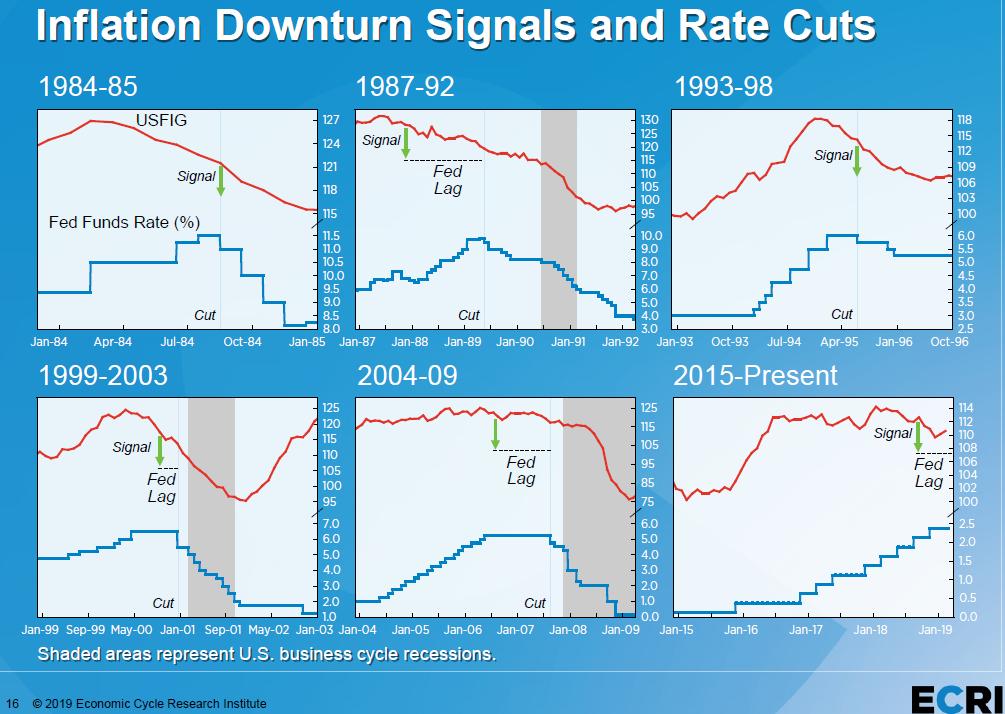 Understand this analysis has nothing to do with bond market action. It is entirely about fundamentals – the fundamentals of the current inflation cycle. What is the conclusion of this 19-page presentation?

So now you have Santelli, a markets guy, and, Lakshman Achuthan, a fundamental analyst, both say the biggest danger of the Fed’s approach is the refusal/inability to execute preemptive cuts/hikes.

No wonder the Fed kept raising interest rates late last year when, as Achuthan says, they should have begun cutting rates in September 2018.

And what about the Fed’s deep belief in the Phillips Curve? Achuthan writes,

So did Fed Chairman Powell even understand what made Greenspan successful in mid-1990s when he praised him? We don’t know enough about Chairman Powell to answer that question?

But, as Mike Wilson of Morgan Stanley, explained this week on BTV – this Fed doesn’t understand how QE & QT changed the yield curve and how this yield curve has been INVERTED since November-December 2018.

Watch this 2:30 minute clip. It will help explain why Mike Wilson has been more accurate than most about markets. Then ask yourselves why the Fed didn’t understand this or why it still doesn’t get it.  Guess they are simply fulfilling their own mandate of remaining “infallible”.

Last week we pointed out that the DSI (Daily sentiment index) on bonds was 86%. Well, this week it touched 91%. On the same day, we saw

Given that this fall in rates is a global phenomenon, is there a global measure we can apply to understand where rates could go? 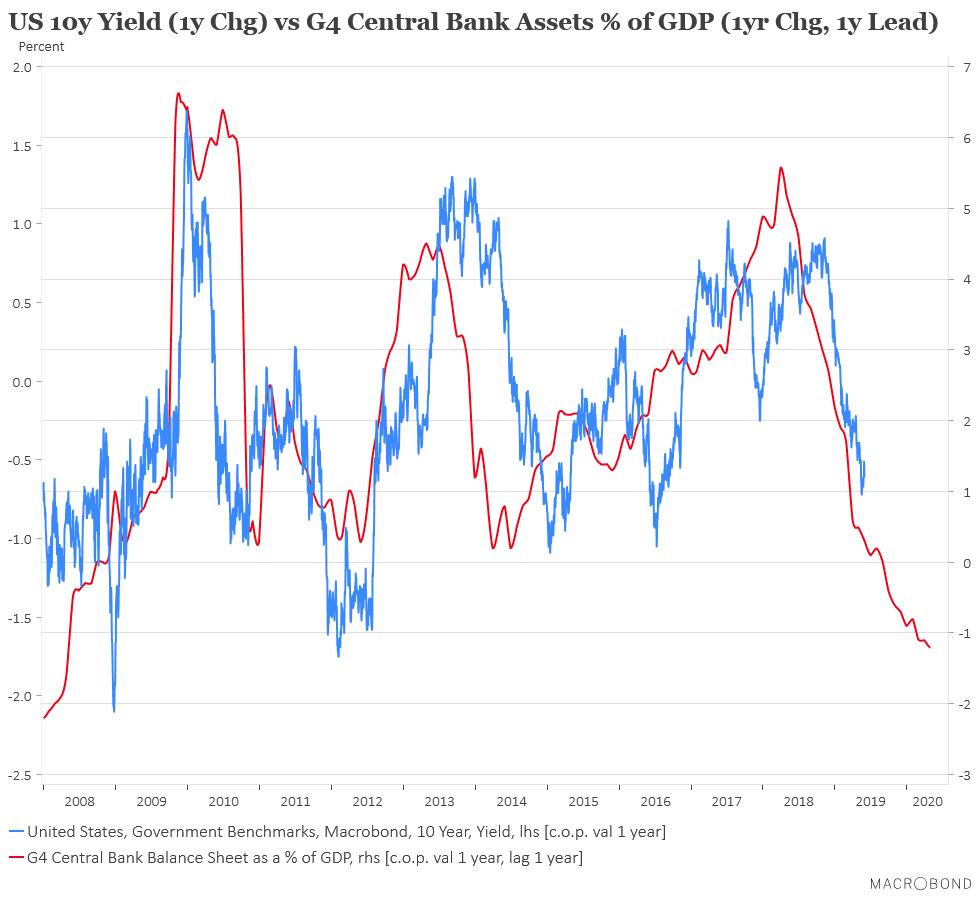 What about technicians? Paul Ciana of BAML gave a target of 2.05% for the 10-year yield and 1.78% for the 2-year yield on Monday. That day, the target seemed aggressive. Now we could see it next week.

What do this week’s fundamentals say about direction of yields?

This week, a target was updated, 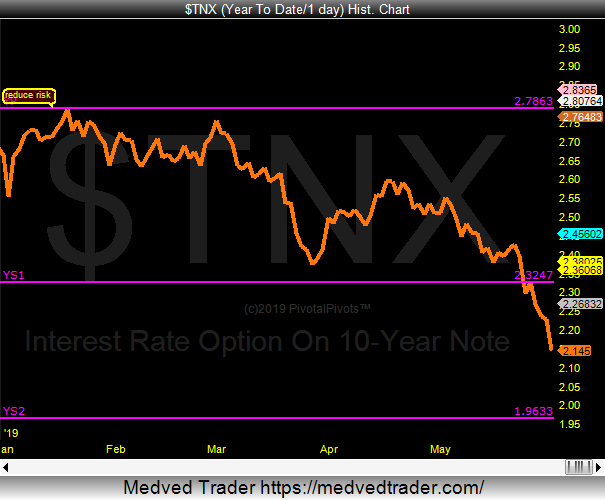 There is no doubt about the momentum of the fall in yields. But is that momentum about to be reversed? Not yet, according to 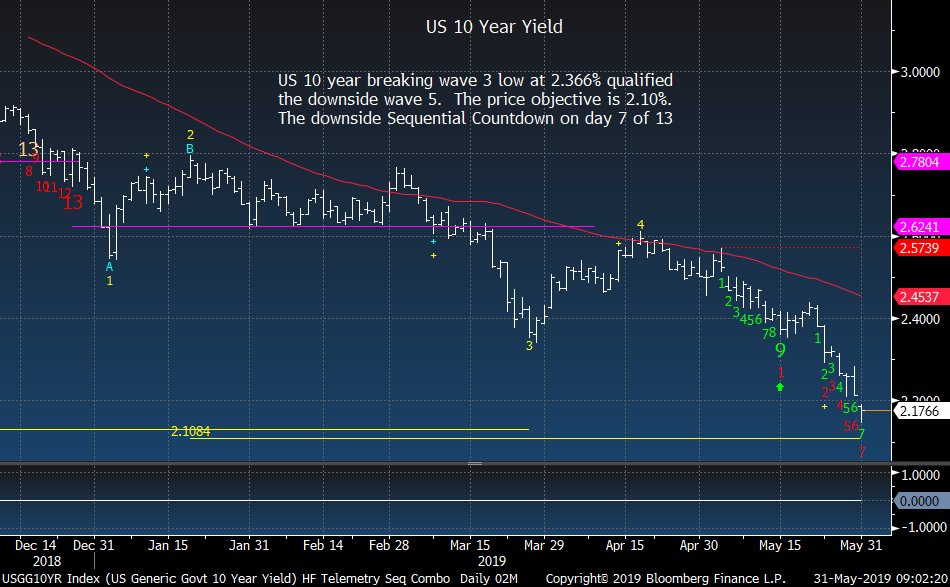 On the other hand, next week features lots of data beginning with PMI on Monday and ending with the Non Farm Payroll report on Friday. That data could reverse the momentum of this week’s fall in rates or amplify it.

Credit finally got affected this week adding to the conviction about the Treasury rally. 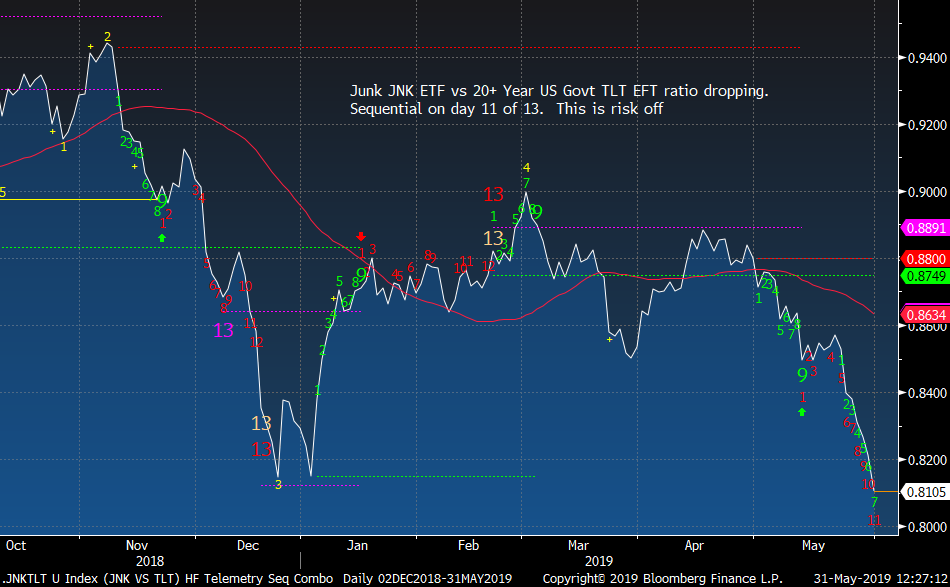 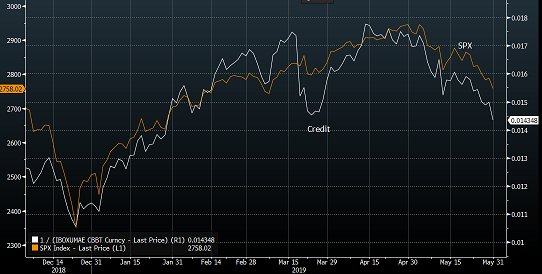 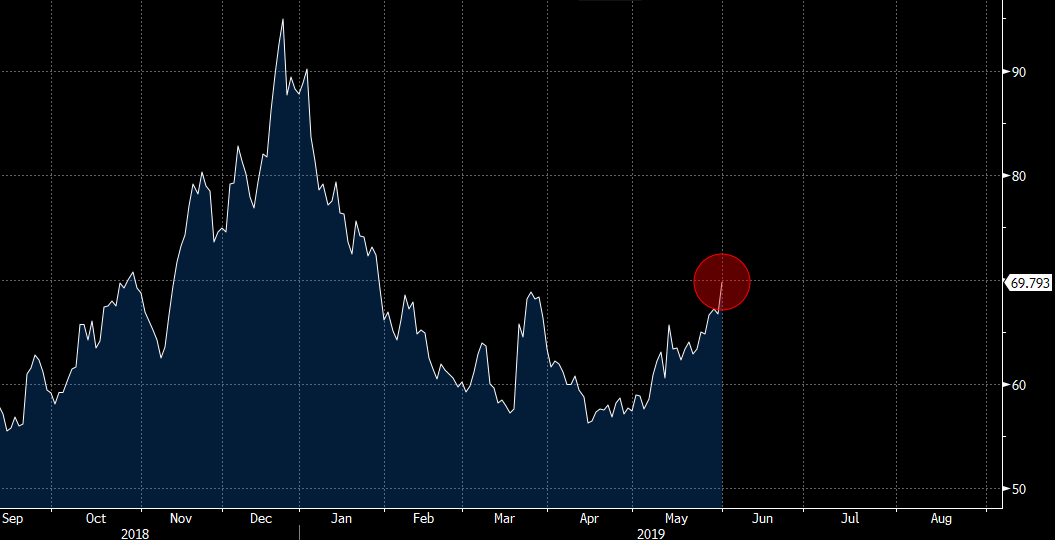 So now credit is sending the same message to the Fed, isn’t it?

Any exhaustion in the downtrend yet? 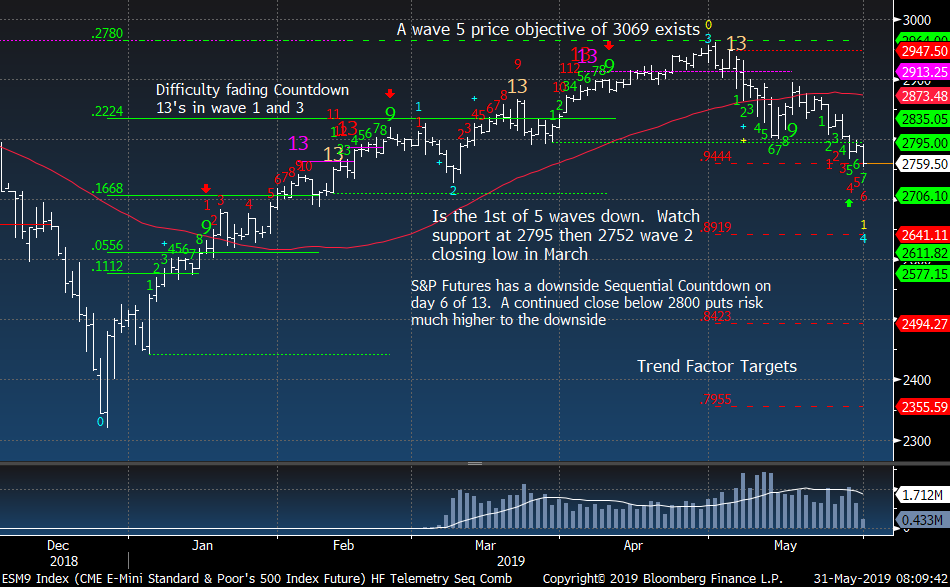 Not only did the S&P close below 2800 but it was both a weekly & monthly close under 2800. So, according to Lawrence McMillan of Option Strategist,

How far is a confirmed down level? 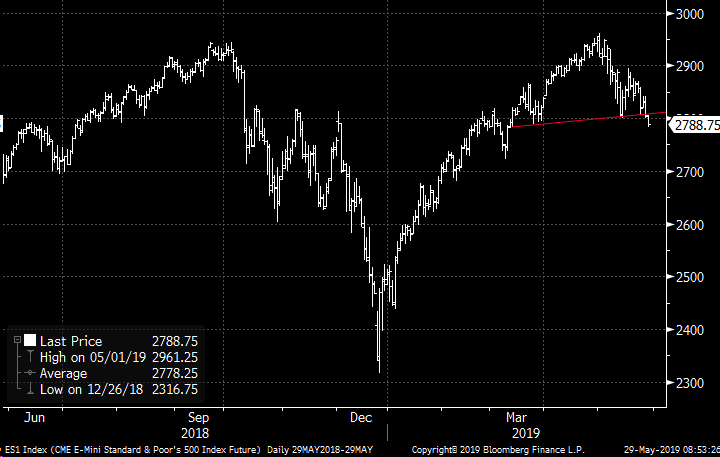 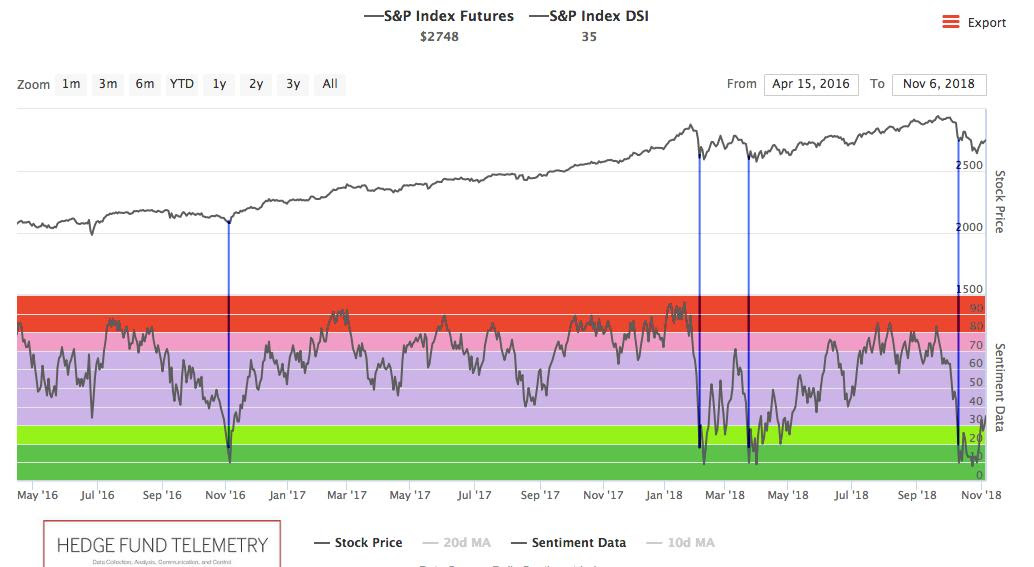 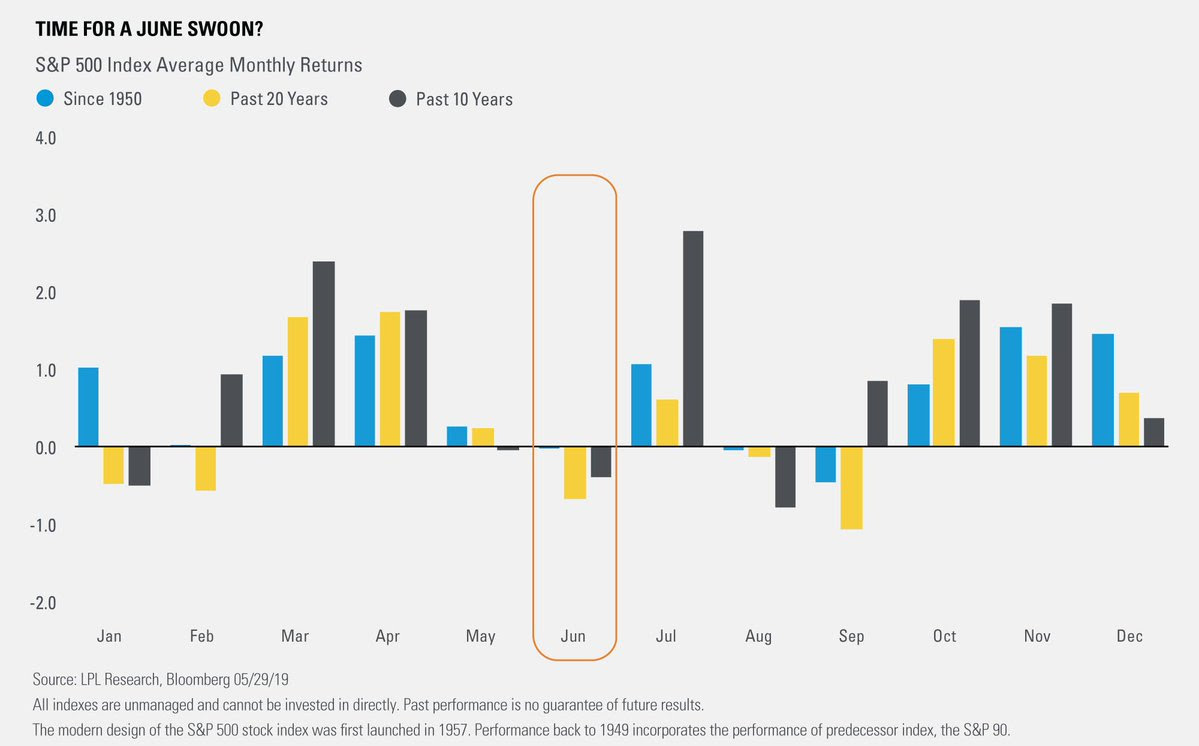 Is it a sign of bounce in the abused or was it the weakness in the Dollar? As Market Ear reported, 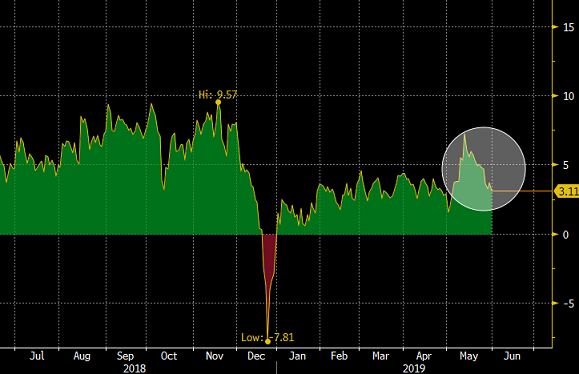 And in keeping with the Dollar weakness and, more importantly, with real rates falling plus possibility of a rate cut, 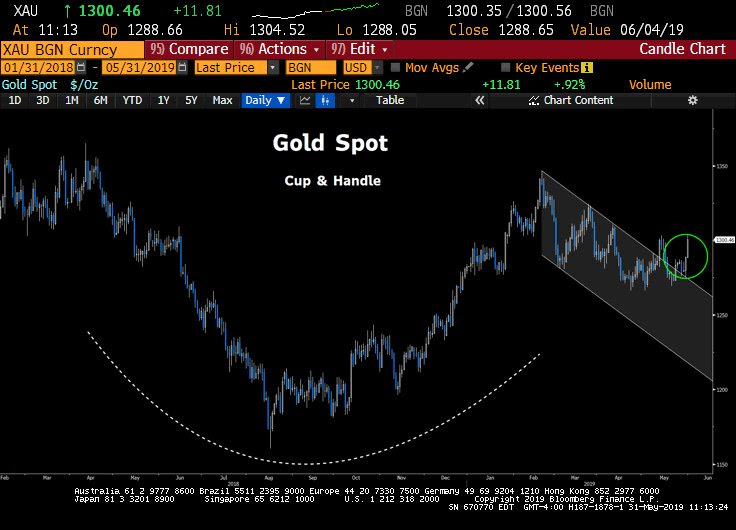 6. US tariffs on Mexico

President Trump’s decision to impose tariffs on Mexico did change the psychology of some investors. For a detailed discussion of this decision, see our adjacent article – US-Mexico & Israel-Egypt vs. India-NaPak; A Shift in US Global Strategy?