Remember the China story of three years ago? That China was on its way to be the greatest economy in the world & bypassing a declining America in virtually every way? Remember how they forced President Obama to disembark from the back of Air Force One in Beijing instead of from the front.

Enter Trump. He was virtually the only American leader who said wait a minute – the only reason China is supposed to be great is that they take $500 billion from America every year and America is too meek to resist; the only reason China is catching up to America is that they are forcing US companies to surrender technology and they are stealing what they cannot get that way. He said America can’t become great again until America stops China’s predatory actions. And he promised it would be easy to win over China.

He was ridiculed by his opponents. And now they tell us how the Chinese think long term and how America is hurt by its short term focus. We now hear how President Trump has to win the next election while President Xi does not face such electoral pressures.

The reality seems just the opposite.

Bloomberg’s Tom Keene invited George Friedman of Geopolitical Futures to get his feedback about China, Hong Kong and President Xi. We urge all readers to listen to the 6-7 minute long podcast. A quick summary of Friedman’s comments on the podcast & on BTV is below:

In contrast, President Trump is almost sitting pretty given the current slate of Democrat candidates for 2020. And he has brought his country to his side against China. Look what this week’s Pew poll revealed: 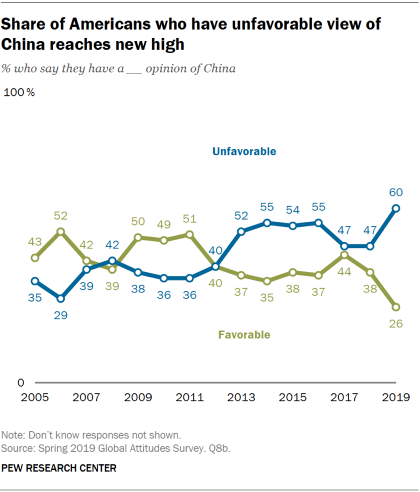 Look when China’s unfavorable rating began to rise? When 2017 began, just as President Trump took over as America’s President. And when a democratically elected leader gets his country behind him, he gets stronger on that issue, not weaker.

In contrast, as Dr. Friedman told Tom Keene, President Xi is getting increasingly nervous as members of China’s Central Committee have begun whispered discussions about him. If that is happening in Beijing, what might be happening across the country in local regions & provinces that have not benefited economically as much as the coastal regions have.

Dr. Friedman amplified his thoughts in an article titled China and a Global Economic Contraction. We urge all to read this article.

What is it? Communism, Maoism, National Pride or Prosperity? Friedman is clear – “The foundation of China is prosperity; national pride is just a substitute.”

And that promise of prosperity was based on China’s huge export machine & its ability to coerce buying nations to keep importing from China. But instead of keeping a gentle respectful tone to their dealings with America, Xi’s China built up an aura of Chinese pride.

Enter Trump. He imposed trade tariffs on China & publicly threatened to make them worse. Not only were his actions dangerous for China, his public comments insulted Chinese pride. President Xi reacted and made the situation much worse than it needed to get. He did not learn from Japan’s Abe. Instead, he acted like Putin without Putin’s relative economic independence from America. Instead of managing Trump, he provoked Trump by going back on a deal their trade negotiators had apparently reached.

This was a major failure of President Xi and the Chinese leadership realizes that “their relationship with the United States has gotten out of control.” And that may be threatening a global economic slowdown, the last thing a large exporting country needs.

Not only is Chinese pride getting bruised, their economy is being hurt. 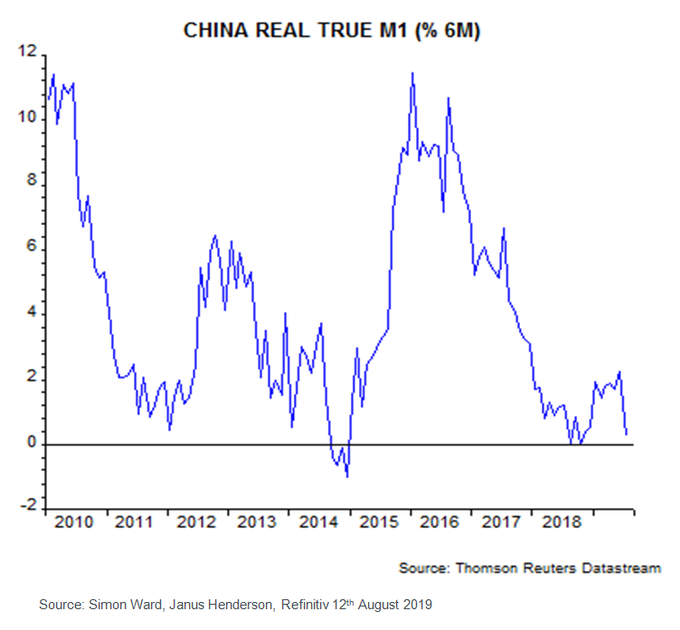 See how pride becomes the biggest risk for a nation run by an autocrat. A huge nation that faces a 9.1% rise in food prices should be buying lots & lots of food from the world’s biggest producer/exporter of food. Instead, Xi & his colleagues have announced they will not buy Ag products from America as a retaliation for Trump’s tariffs.

How dumb is Xi? Friedman explains,

President Xi should have tried to learn from Prime Minister Modi who runs a much poorer country with hundreds of millions of people in worse economic conditions. Unlike Xi, Modi has been totally focused on doing as much as he can to improve living conditions, not of the elite or upper middle class, but of the poor. That is why PM Modi won his re-election in a landslide.

Unfortunately for him, President Xi has never run or has to run in an election. China’s leadership survives from the recognition of their strength & the vast reach of the Chinese intelligence system. And double unfortunately for him, China’s intelligence system “failed to anticipate the uprising in Hong Kong.” That, to Dr. Friedman, “raises the question of whether a pillar of the Chinese system, its internal controls, is weakening.”

There is no doubt that this Hong Kong crisis is a big negative for President Xi.  And President Trump’s politely expressed & seemingly helpful tweets with an offer to help Xi with Hong Kong are adding to Xi’s loss of face. Imagine the autocratic head of the next global superpower being offered help from his biggest adversary in his own country & city.

Add to that the humiliating spectacle of Chinese protestors singing the American National Anthem in Hong Kong and raising American flags.

President Xi is without doubt both mortified and livid. But is he in control? Dr. Friedman writes,

On the other hand, the Hong Kong situation may have become too big & too dangerous for America & President Trump too. Hong Kong, by itself, is the 5th largest economy in the world and a great amount of wealth is resident in Hong Kong including real estate, private equity & the world’s largest corporations. It is still a major global banking center & its downfall could create massive problems for global banks like HSBC. And we all know that the easiest way for contagion to spread globally is via the inter-connected banking system and the global stock markets.

President Trump can watch a lot with equanimity but not a steep & confidence-damaging fall in the US stock market. And it might be safer to deal with a chastened President Xi instead of a new leader who may want to show his own strength & power.

So is there a short term Trump-Xi rapproachment in the cards? Not a comprehensive long term deal but a mutual pat on the back with China stepping forth to buy large quantities of US food (to quell China’s food inflation) & US alleviating some pressure on Huawei & postponing some tariffs.

But what about Hong Kong? The scariest thought is that even Chinese leadership may not know. As Dr. Friedman concludes in his article,

And that might be the most damaging result of the Trump-led US-China fight – a worldwide recognition that China is not guaranteed to be the next dominant global superpower. That in itself should count as a major victory for President Trump.