1.Mendacity of the mediocre

In Agatha Christie’s famous story titled The Kidnapped Prime Minister, Hercule Poirot’s sidekick Captain Hastings says to himself – “If he [Poirot] failed, I would have preferred him to fail in a less ridiculous manner“. As the story unfolds, Hercule Poirot did not fail. He ended up solving the case brilliantly by his own method, however farcical or ridiculous that might have seemed to his colleagues at Scotland Yard & to his sidekick Hastings. That is the difference between a self-assured winner & a mediocre plodder who cares far more about looking right instead of succeeding.

We bring this up because, as it is now obvious to many, Fed Chairman Powell acted just like Captain Hastings in his July 31 presser. He was so obsessed about not appearing obsequious to markets that he did much less than he should have. His demeanor, his pose were manufactured to suggest a leader who didn’t panic or flinch. It was the reverse of his pose at the December 2018 presser, the presser that created a meltdown in the stock market.

So this time, he created a reverse meltdown in the Treasury market. The entire Treasury yield curve has fallen in a wave & so have global interest rate markets. And that too in less than 3 weeks. And what is worse is that the 30-year yield is falling faster & steeper than other shorter duration yields. This Thursday, the 30-year yield fell to a new all-time record low & that too below 2%. Look at the chart of EDV, the 25-year Treasury Zero Coupon Strip ETF, and wonder whether that is a Beyond Meat type IPO:

Not only did the 30-year rate melt down to a new low, but the widely monitored 2-10 curve went negative this week. Why?

The 30-year yield fell this week by 24 bps, followed by 10-year falling by 19 bps & the 2-year falling by 15 bps. The speed & the ferocity of the move stunned many. We saw a quote attributed to Jim Cramer which reads – “There has NEVER been a bond market move like this in my lifetime. It would be wrong to ignore it“.

It is as if the entire world is running to buy safety (i.e. high ratings) & duration as if they were both about to run out. And they might be given that negative yielding bonds have now risen to $17 trillion.

Fundamentally, it is easy to explain:

That may explain the direction but it says nothing about the speed of the move. That seems to be coming from a stampede of Pension Plans to buy long duration yields.

In short, Powell set off a panic for all large institutions to run ahead of the next easing of the Fed. No one believed that crap about a mid-cycle adjustment, especially not after the pathetic economic data from Germany ( the pride of Europe) & China. How horribly behind the curve is Powell’s Fed? The Market Ear wrote: 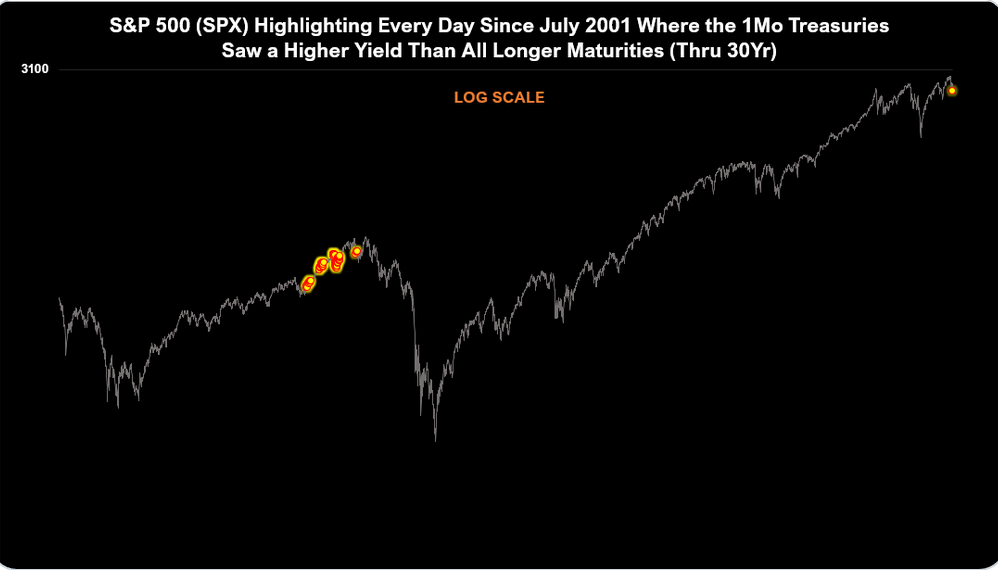 This week Jim Cramer, Rick Santelli, & Rick Rieder said the Fed needs to get ahead of markets by shocking them with a 50 bps rate cut in September. Even Jeff Gundlach joined the chorus in his call with Reuters:

But a 50 bps rate cut may no longer be enough. 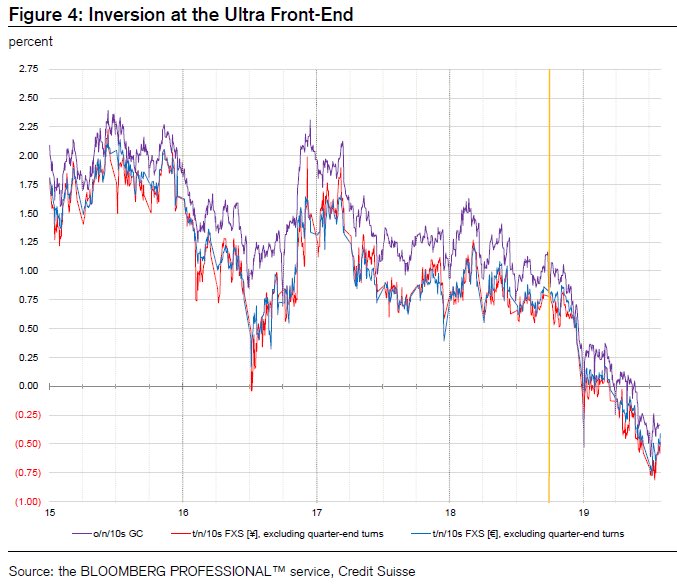 With all this, did any one mention a “crisis” word? 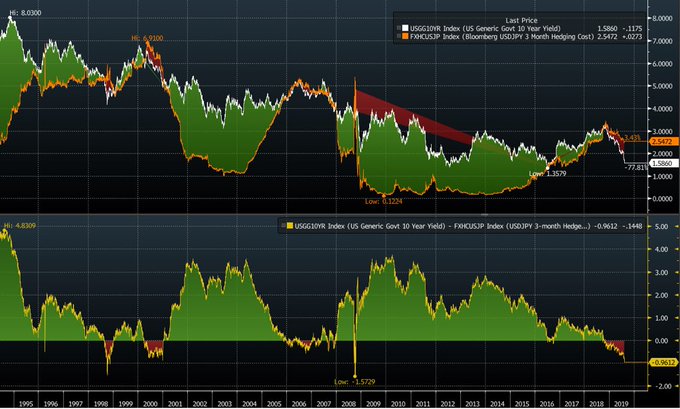 When was the last time you saw this amount of pain, anguish and disgust at what a Fed Chairman said at a  FOMC presser? In the days after the December 2018 presser. That was when Powell was “posing” in one direction. This time he “posed” in the other direction.

No wonder David Rosenberg said a few weeks ago that he had never seen a Fed flip-flop as much as the Powell Fed. We would modify that description a bit. The Flip-flops themselves are NOT the problem. But in this case they are a huge problem because Chairman Powell has flip-flopped mainly to look “good” and not to act according to the Fed’s mandate. Or as Reuters reported,

But the above in itself describes a dangerous facet of Powell – that he cares far more about posing than getting the action/decision right. Going back to the Agatha Christie analogy, we unfortunately have Captain Hastings as our Fed Chairman and NOT Hercule Poirot.

As The Market Ear wrote on Friday early morning: 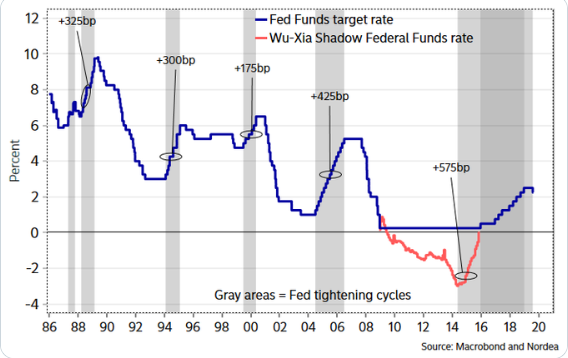 Doesn’t Chairman Powell get this basic fact? Or is he loath to admit his Fed’s huge mistake in 2018? Or is he very loath to suggest President Trump was right last September? Or does his Fed not know who Lakshman Achuthan is? Lakshman & his ECRI have been saying for awhile that the Powell Fed should have CUT rates in September 2018 instead of raising them in Q4 2018.

This week Achuthan explained when yield curve inversions are followed by a recession and when they are not:

That conclusion would not come as a surprise to David Rosenberg who has been warning of a recession for some time.

What if these smart economists are right? The US is the strongest & healthiest large economy in the world today. What if the US looks like it is indeed going into a recession? Especially now that Greenspan has publicly said zero is just a number & there is no real reason why Treasury rates cannot go negative. 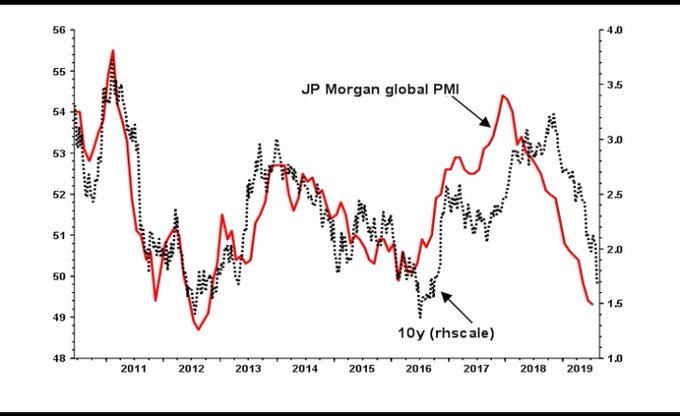 Assuming the current meltdown in rates is largely due to the demand-supply imbalance for long duration Treasuries, why not increase the supply? Somehow that occurred to two key entities on Friday:

Wasn’t it just a few weeks ago when we suggested the Treasury issue a trillion-sized 30-year bond at around 2% to fund infrastructure program, especially for the industrial states in the Midwest? It would be the right stimulus for the US economy & it would solve the lack of supply of safe duration problem. But silly us! We thought it would take a large rate cut from the Fed to get the 30-year rate to 2% . Who knew it needed a unduly hawkish Fed to get the 30-year to 2%?

But such a stimulus plan would need a bipartisan acceptance and that seems far fetched at least at this time. It might be different if & when a slowdown hits the US economy.

Well, what about a fiscal stimulus from another large economy that already seems to be falling into a recession? 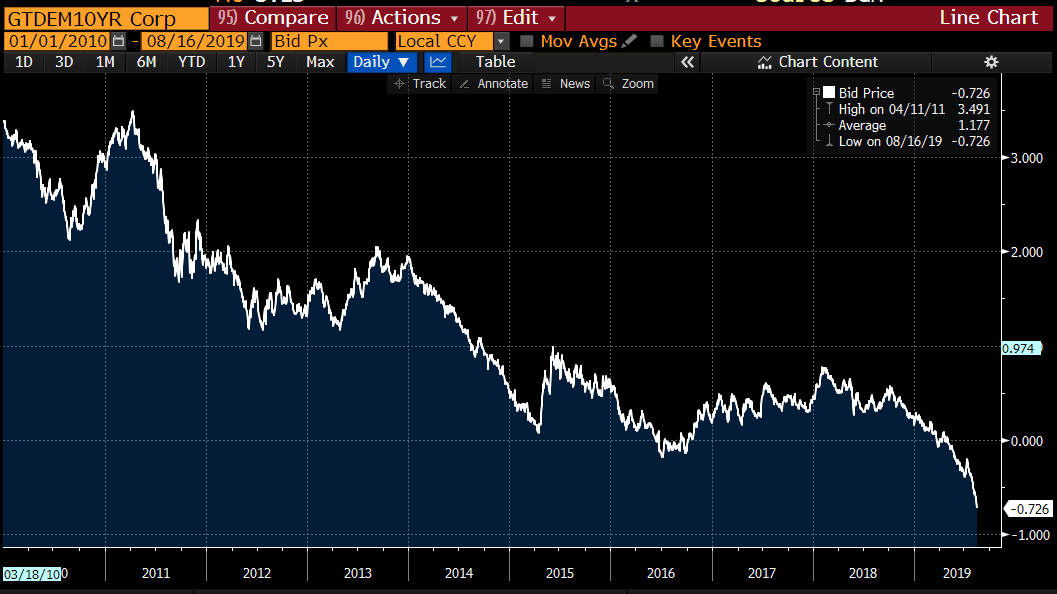 It looks like this pain finally got to Merkel.

Larry McDonald described this as “Colossal and historic, market implications here”. And he could well be proven right. Given that Jackson Hole is next week and every central banker in the world is, hopefully, petrified by this month’s meltdown in rates, we could get some nod towards greater fiscal action in both EU & USA.

But given the history of Germany, the markets are probably dismissing this stuff as rhetoric. May be that is why the reversal in rates on Friday morning faded by the end of the day.

And if there is ever a time for rates to reverse higher, it would be next week with both Jackson Hole & the overbought condition of long duration Treasuries. And you also have the twin possibilities of easing of sanctions on Huawei & the scheduled phone call between Presidents Trump & Xi. 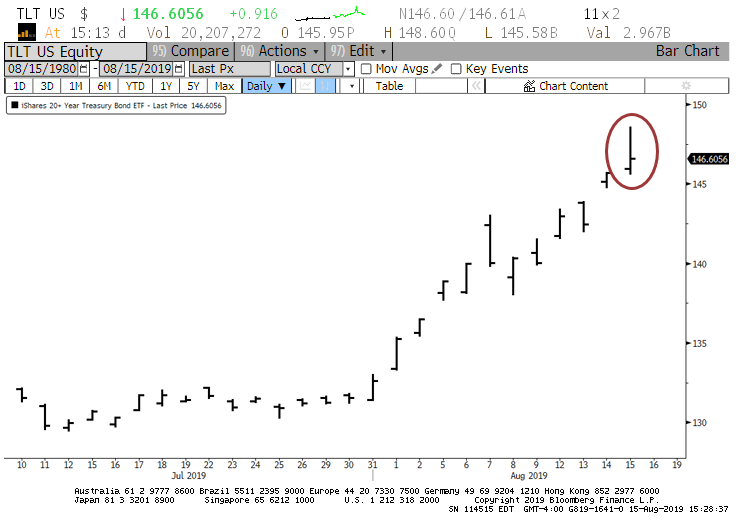 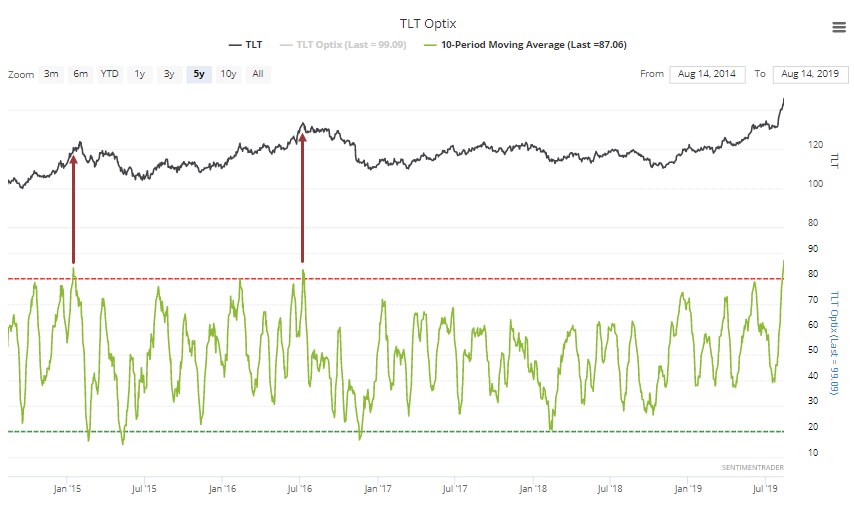 And this week we saw people, who have been negative on Treasuries on Fin TV so far, start telling viewers to hold long duration Treasuries as a hedge for stocks. Would you call that capitulation?

But if the talk about fiscal stimulus proves just talk & if Jackson Hole comes becomes about greater than expected easing by ECB in September then Treasury rates could keep melting. And especially if Chinese troops march into Hong Kong.

It seems clear that while Germany moves interest rates, China moves stocks. And, as we said above, we have the potential of better news on the US-China trade front. Heck, after three bad weeks, even a temporary relief for Huawei could lead to a rally in stocks. 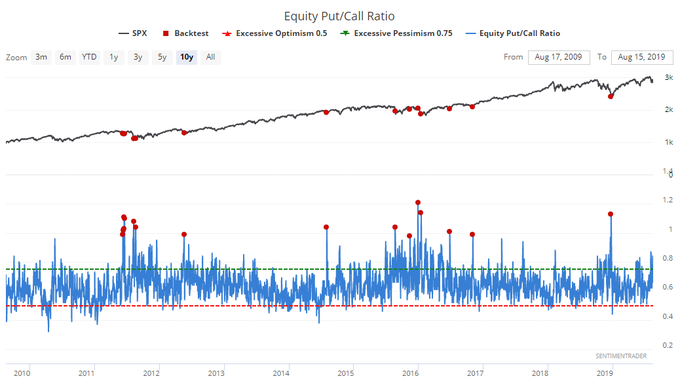 Of course, that does not include geopolitical events like Chinese troops marching into Hong Kong. (See our adjacent article about China-US-Hong Kong titled China on an Edge – Is Trump Winning Against Xi?) .

Secondly, it is hard to call a turn in “flood” type of markets.So what does a sensible practitioner suggest?

The Dollars remains the uniquely non-trending asset. Bonds have melted down in rates; stocks have broken support, Gold has rallied but the Dollar remains decisively range bound. This week, the Dollar rallied by over 70 bps.

And, despite this Dollar rally, Gold also rallied by 80 bps. What’s going on? One answer could be: 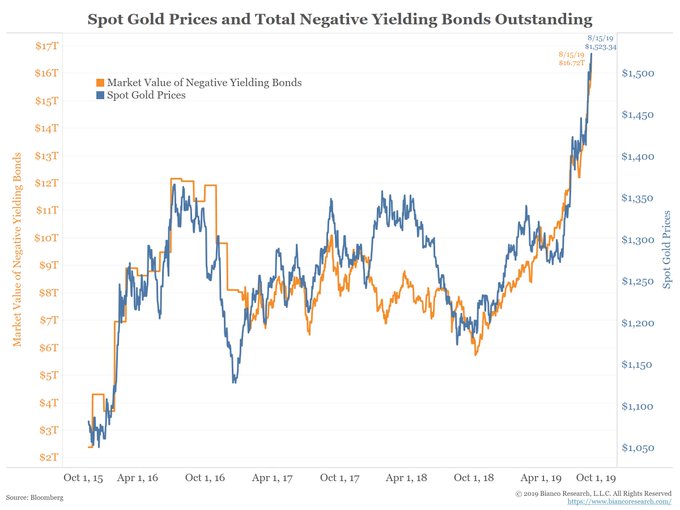