What an epic move in interest rates in three days? 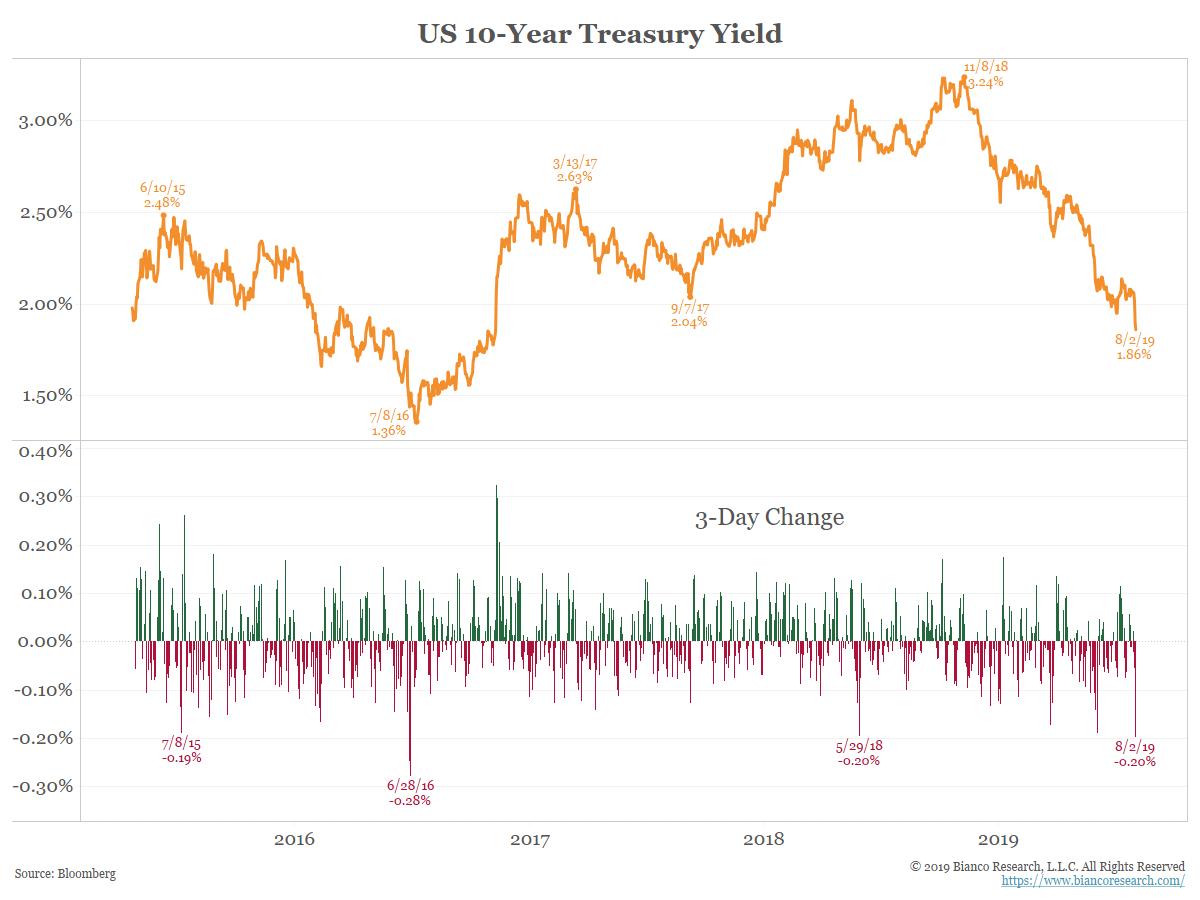 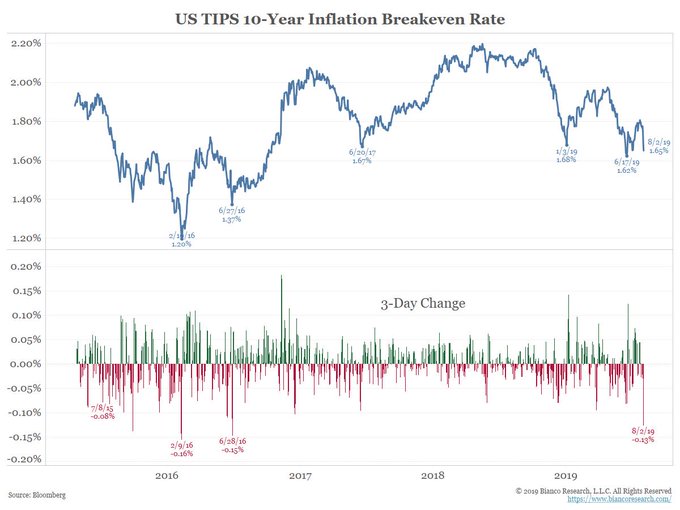 That’s awesome after the meeting but did any one say “buy bonds” in the morning before the Fed meeting? 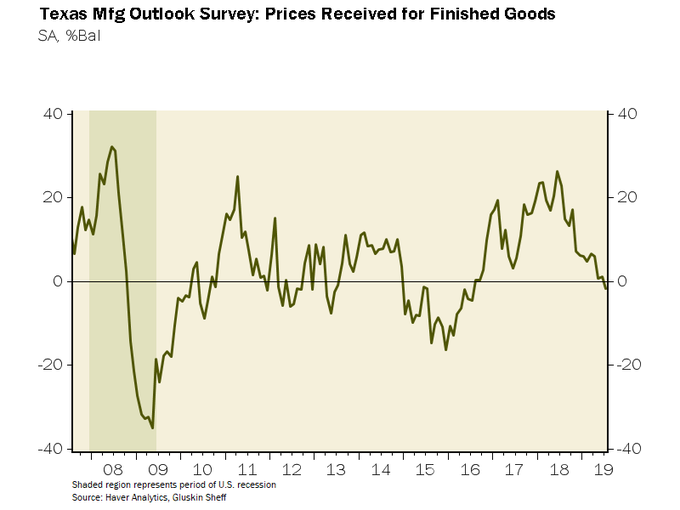 Good. But now what? Isn’t a story termed an “epic” after the story is long over? So does Bianco’s use of “epic” suggest the big move in rates is spent & now investors should book profits? That would be the “rational” thing to do, right? And nobody got poor by taking profits, right? On the other hand, no one got rich & began wearing diamonds by taking profits too early.

That may be what Priya Mishra (TD Securities Head of Global Rates strategy) thought when she told BTV’s Jonathan Ferro on Friday – “go long max duration risk here” and closed with “cling on [to your Treasury positions]; Buy more“.

As we recall, Ms. Mishra was not a bull on Treasuries a couple of months ago. But, like Bob Michele of JPMorgan Asset Management, she seems to have reversed her position and is now so unabashedly bullish that she says go long max duration risk here – meaning buy the longest maturity Treasury bonds and as many as your risk tolerance can support. Wowser! And, kinda like Bob Michele, Priya Mishra is now openly worrying about default risk in credit.

This move began with the Fed statement & Chairman Powell’s presser on Wednesday afternoon. Look back to the past few weeks and notice that the big down movement in rates was so far in shorter maturities with the 5-year yield as the tip of the spear. In contrast, the 30-year bond has been a relative laggard. That makes sense because if the Fed eases aggressively in a decent economy, then growth gets a jolt & inflation expectations rise leading to under performance of the 30-year rates.

But the Powell presser changed that almost totally. His miserly 25 bps rate cut & his “mid-cycle” statement told investors to bet on the economy slowing more & inflation expectations falling more. No wonder the 30-year yield fell by 5.6 bps & the 2-year yield rose by 2.8 bps on Wednesday afternoon, a big flattening of the curve. This continued on Thursday morning until the China tariffs announcement by President Trump and then the short rates also fell of the cliff with the 2-year yield falling 14 bps on Thursday alone.

You could have bought EDV, the 25-year Treasury Zero Coupon ETF, at around $126 on Wednesday morning & enjoyed a 5% run to $132.37 at Friday’s close. Remember what David Rosenberg had tweeted a few weeks ago that the 30-year zero coupon strip will deliver a 35% return if the Fed lowers the FF rate to 1%. Well, that target is almost priced in by the markets for 2020. What did the entire curve do on the week?

But now what? Isn’t taking profits the smart move as Tim Seymour of CNBC Fast Money said on Friday evening? Probably. But then you have the classic line at the Godfather’s funeral (from min 3:25):

That move was so final. Fortunately, Treasuries are so liquid that it is easy to correct your mistake, whichever mistake you make. So if you wanted to make the “smart” move, what would you look at to pull the trigger? 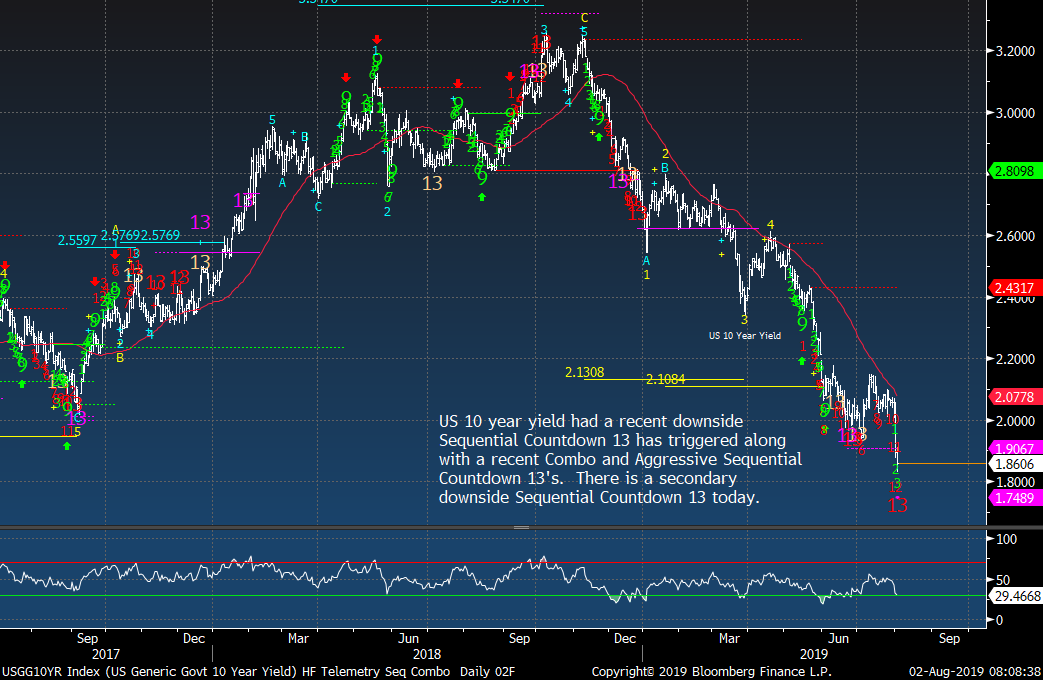 This was the worst week of the year for the S&P which fell by 3.1% on the week. But Nasdaq 100 fell by 4% & Transports fell by 3.7%. It could have been worse had the Dow had stayed near its Friday’s low of down 334 points. But an afternoon rally recovered much of the intra-day loss. We saw couple of smart investors like Hedgeye & @TommyThornton cover some shorts in the carnage. And some pointed out the oversold condition: 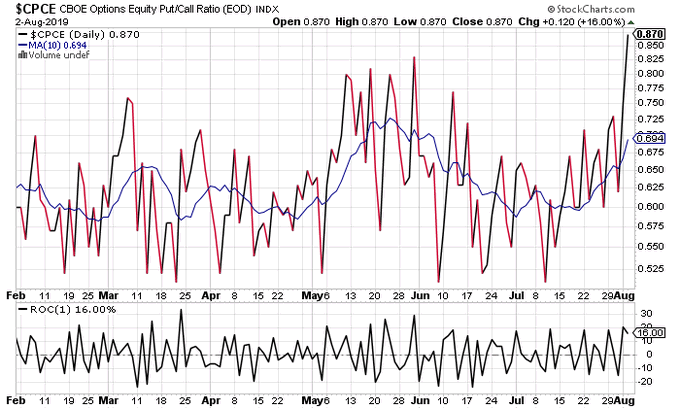 Then the statistical history from The Market Ear: 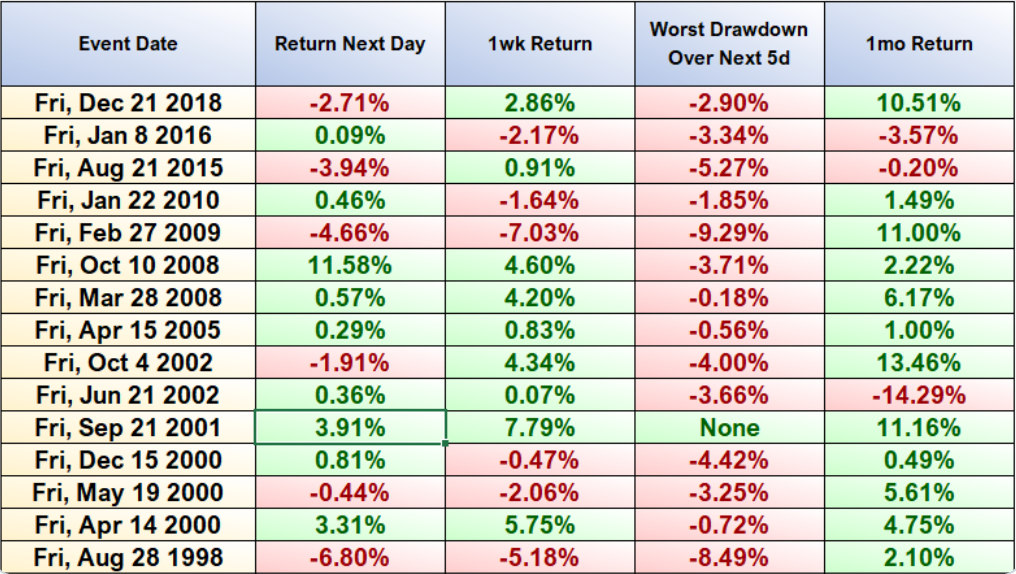 Even some DeMarkians are hedging their bets: 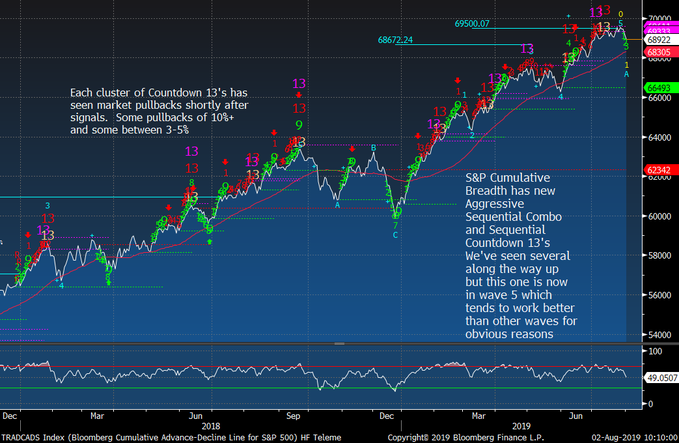 But the S&P is already down almost 5% from its latest peak, right? And this steep fall in rates has to be stimulative for the levered US economy right?

Well, the 10-2 spread is still +ve 13 bps and the shock of the China tariffs will wear off. In any case, these tariffs don’t go into effect until September 1. Then you have the positive beef deal with the EU. As we wrote last week, President Trump will turn on the spending spigot as we get into the 2020 election cycle.

On the other hand, remember the warning of Priya Mishra about the markets looking closer at Default risk in the coming months. Remember the August-September 2007 rally in stocks & risk assets as credit worsened. As markets realized that credit is weakening faster than the pace of Fed easings, you know what happened post October 2007.

3. Behind the Curve Fed & Global Risks

We believe the Fed is already way behind the curve. As many bright minds pointed out that the Fed made a mistake by not easing by 50 bps. Now they are way behind & might get farther behind if global data keeps falling. 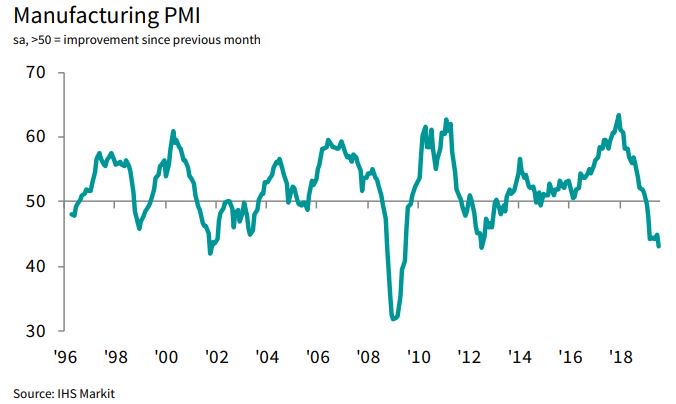 We believe there is another reason for the waterfall decline in interest rates post the Fed meeting. It is no longer the case of the Fed being wrong. It is the far worse case of the Fed being helpless. We all saw how helpless Chairman Powell looked in his presser. Smart connected minds including Bob Michele of JP Morgan, Jim Caron of Morgan Stanley Asset Management & Jim Bianco had suggested that Chairman Powell is on board for faster rate cuts with his Vice Chairman Clarida & NY Fed president Williams.

But this trio does not have either the respect or the power to drive the committee which seems divided with Rosengren & company refusing to yield. So this FOMC seems helpless to act. And that makes it a very very different than Greenspan controlled Fed in 1995 or the Bernanke controlled Fed in 2007-2008.

This is a highly toxic brew & it has the Dollar breaking out and a flood of money coming into the US bringing deflation into the American economy. This is why we need to watch credit & other indicators during the next stock rally whenever it begins.

This has to spell real bad news for emerging markets, right? 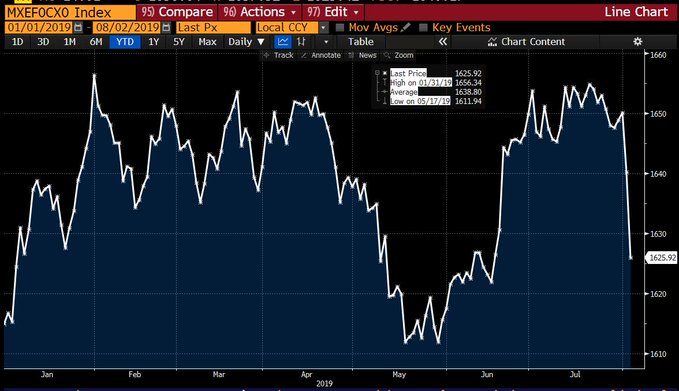 The plight of EM even has previously disinterested people getting tempted: 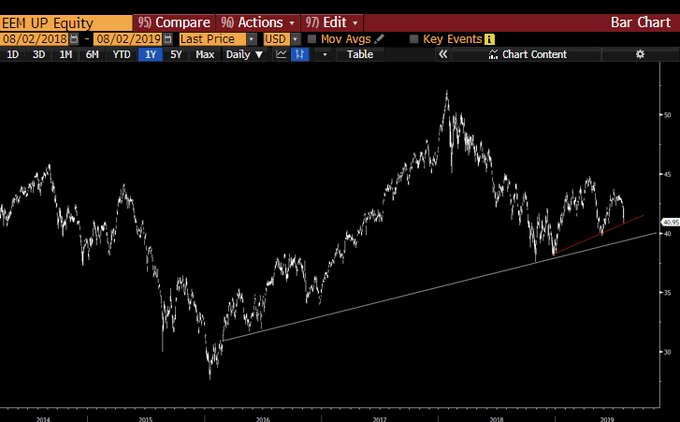 What do the ultra rich in emerging markets do when EM gets into severe trouble? Don’t they send their wealth outside their countries & into the safety of developed markets? Could that be a reason for the interesting suggestion below? 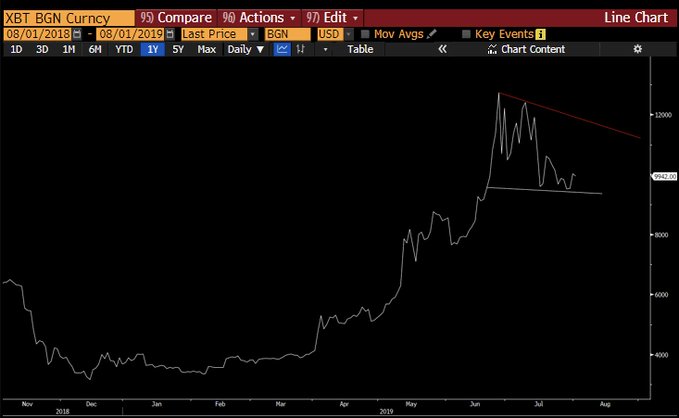 Man, with all this lining up, you have to be dumb to go on vacation this August.