What former Fed ViceChairman Dudley wrote did this week is stunning in its bold arrogant simplicity. He disrobed the Fed’s assumed garb & revealed to the world what it is really is – the quintessential Deep State machinery in America; the ONLY Deep State machinery that is uncontrolled & virtually unanswerable to anybody. Any one who thought the sidelining of AG Sessions by the Department of Justice machinery was the height of deep state power learnt that the DoJ is merely a weak sister compared to the Fed.

Since last December 2018 we have been comparing former AG Jeff Sessions to current Fed Chairman Powell.  We never thought Mr. Powell himself was a committed anti-Trump activist.  But, based on his December 2018 presser, we felt Mr. Powell was being dominated by a more educated & much more committed Fed bureaucracy. He simply did not have the academic & personal stature of either Greenspan or Bernankeneeded to dominate the Fed’s army of hundreds of Ph.D.s.

We felt it was exceeding dangerous to have such a man at the head of the most independent & powerful agency in America. That is why we contrasted him & his Fed to the US Military & its then head General Jim Mattis. General Mattis resigned on his own, partly because he could have been fired by President Trump. But Mr. Powell contemptuously declared publicly that he would not resign even if President Trump asked him to. Now we see he was not being merely arrogant but he was carrying out the wishes of the Deep State within the Fed.

We thought this was so outrageously undemocratic that we wrote an article on December 22, 2018 titled Mattis vs. Powell – Tyranny of the Unelected. Interestingly, former Treasury Secretary Larry Summers used the same military vs. the Fed analogy in his public comments condemning Dudley’s comments that rivaled the anti-Trump derangement of Bill Maher. Dr. Summers also said,

But isn’t that the basic definition of “Deep State”, Dr. Summers? Why didn’t the CNBC anchor ask this basic question? Because the anchor, Sara Eisen, is herself a committed anti-Trumper?

Actually, Dudley may have made a big mistake by publicly asking the Fed to exceed their mandate.

But this Dudley episode & it’s condemnation by many may have done what tweets from President Trump have not done so far, as was pointed out by Cannacord’s Tony Dwyer:

It may have done more than that. It may have given President Trump & his campaign a real & believable ammunition to put the blame for a recession on the Fed. Witness:

President Trump always had data like this. Now President Trump has a former Vice Chairman of the Fed, a long time veteran, proving the Fed’s “enemy of Trump” stance with his own words.

Clearly President Trump was unsettled by the sell off on Friday, August 23 from the angry exchange between China & him. So he pivoted & crossover-dribbled to a different “second thoughts” comment. He gave up nothing and gained a big rally on Monday. Then China gave an assist & the Dow rallied by 3%.

For his part, President Xi seems to have quelled a nascent revolt & the Party gave him a title that only Mao had before. So he also can talk tensions down a bit while he established his order in Hong Kong.

But what is really going on in China? Below is a chart from Lakshman Achuthan of ECRI that BTV’s Tom Keene called “the mother of all charts”: 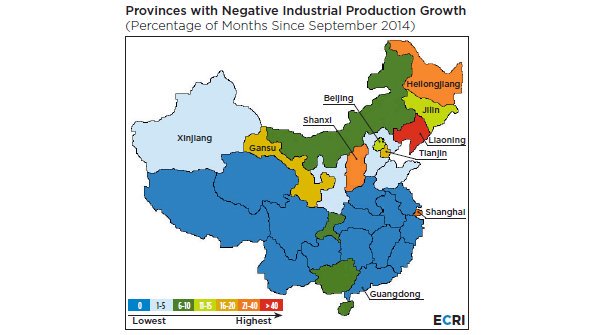 Those who think President Trump & the US is playing with a weaker hand should also look at Beijing’s reaction to US warships going through the South China Sea. In this connection, look how George Friedman compared the trade dispute with Japan in 1980s with the current trade dispute with China: 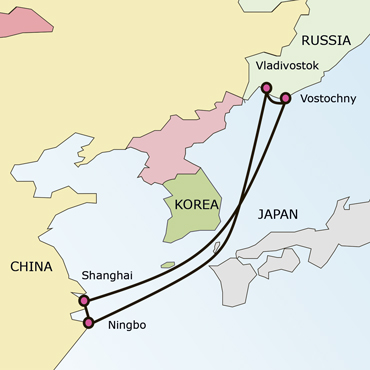 But China is very different, as Dr. Friedman points out:

And technology is going to be the vital factor in future conflicts, far more than it has been in past wars. So what is America’s hammer in trade negotiations with China? Look what Hany Nada, co-founder of Acme Capital said on CNBC:

Having said all that, we believe we will see the same a step forward, a step backward dance between USA & China all through 2020. This dispute is essentially unsolvable & both Presidents have other battles to fight, the most important being 2020 for President Trump and 2021 for President Xi. And those battles will need directing the attention from trade wars to matters of interest rates & stimulus.

What the equity market is fearful is about a big rupture but not about the status quo. So if both leaders simply allow the status quo to continue, equity markets would be content, we think. Look, – “Trumpian Uncertainty” is actually falling: 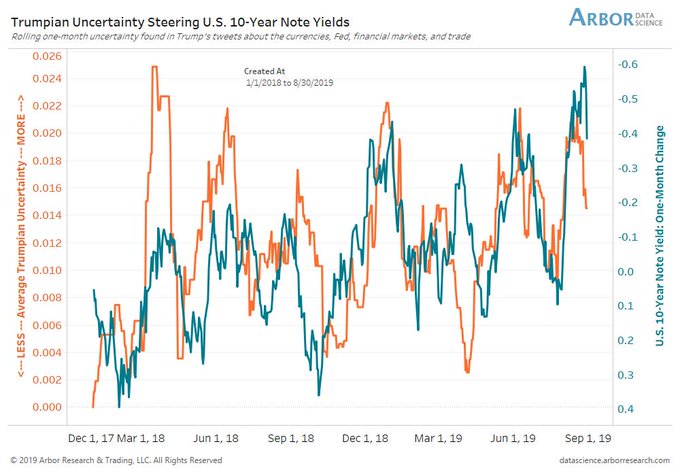 First the dog that did not bark. This was a week in which Dow Jones rallied 3% or 774 points & all averages rallied hard with even moneycenter banks like BAC & C rallying 4%. Even the failing transports rallied by 4%. If there was ever a week in which Treasury rates should have gone up & the curve should have steepened, it was this one.

Priya Misra of TD Securities answered this question in her conversation with BTV’s Jon Ferro on Thursday morning:

Achuthan explained in a little more detail on Friday to BTV’s Tom Keene:

And what about the vaunted consumer? 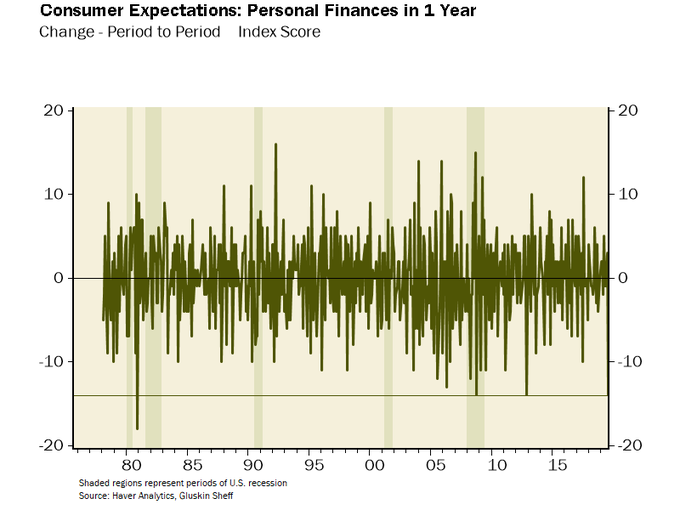 With all this, next Friday becomes very interesting. What if the payroll report comes in stronger than expected? Would the Treasury curve steepen with the higher growth? Or will the Treasury curve flatten because such a report might prevent the Fed from easing rates aggressively?

The people who worry & the bond market are saying that the global slowdown will infect US growth & the Manufacturing slowdown will affect Services as it has done in Germany. The confident ones say the US is a closed economy & the US consumer is strong.

This is a sharp & verbally violent debate and such debates are resolved sharply & violently to use words of technician Carter Worth from his clip below.

Since we quoted Mr. Worth above, we will begin with his descriptive “wake me up when September ends” directive. He said on Friday on CNBC Fast Money that the S&P is mired in sharp indecision & that is usually resolved sharply, lower in this case. He thinks the downside is to 2720. Hear him directly:

On the other hand, the legendary trader Larry Williams says, per Jim Cramer, that he sees a big rally in September beginning before labor day that should be sold at the end of September. Watch Jim Cramer communicate the case of Larry Williams:

Who makes a better case? We leave to readers. Who will prove to be right? We will find out by September end. But, to his credit, Jim Cramer said the above on Tuesday, August 27 evening. Since then the Dow has already rallied by 625 points & the S&P has rallied by 57 handles in the remaining three days of this week.

What about the legendary yield curve inversion? One factual tweet says:

But what about the immediate aftermath of an inversion? Isn’t there a rally first? Yes, a 15% rally on average said Tony Dwyer on CNBC Fast Money this past Wednesday.

And a surprise in the last two days? 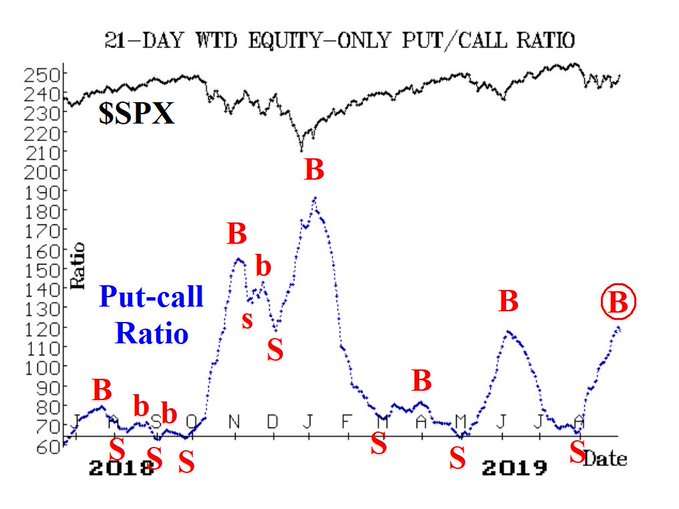 But there is a caveat in his Friday summary:

The Dollar was up 1.2% on the week, But did it break out to a new 2-year high? Depends on which Dollar index you use & how much Euro weighting it has.

Regardless of this Dollar strength, Silver rallied up 5%, Oil rallied 2% & even Copper rallied 28 bps. Gold was marginally lower by 36 bps but the Gold Miners ETF (GDX) was up 78 bps.

This week we heard about Treasury’s ideas to use the monies collected from Trade Tariffs to give a tax cut to people. Our earlier suggestion was to set up a Strategic Food Reserve by using trade tariffs money to buy food from US farmers that China would have bought and then use it for targeted hunger relief for needy Americans. But targeted tax cuts for needy American citizens might be simpler and better.

Targeted spending was a tactic used by PM Modi in India. His programs to build toilets across rural India paid off enormously in his 2019 re-election. The poor, a huge voting bloc, identified him as a leader who does things for them while others merely talk. Of course, toilets are one of the many programs introduced by PM Modi.

This is a great pro-people program & a brilliant political one. Building toilets is fine but approx. 300 million people in India do not have access to running water. Women walk a couple of miles to get pots of water from a river and carry it home. That water is too precious & too scarce. So women have little choice but to sit in an outhouse type area during menstrual periods in villages, especially women from families who can’t afford regularly priced sanitary napkins.

This is a classic Modi program – designed to significantly improve women’s hygiene, provide a higher quality of life at a far reduced cost & save a highly precious resource like water. And it doesn’t hurt that poor women are the largest & most dedicated voting bloc in Indian elections.

7. Women scorned? Do they win later?

We have all heard the phrase about “women scorned”. But isn’t that to be expected more & more in our era of gender equality? Actually smart confident women have never been afraid of being scorned and they usually have the final win. Below are two who were scorned publicly & won in the end.

Both women show the anger & pain at being so clearly rejected. But both are confident enough to ignore the rejection. They both get their men at the end.

8. Will the Lady Scorn us again this year?

Unlike the two spectacular women above, we have been scorned every year by that cruel woman named Lady Luck. We have no doubt she will scorn us again on the Saturday before Thanksgiving if not earlier. But the journey is magical & full of hope. Michigan is again ranked high at No. 7 while that evil is ranked No. 5. But Urban Meyer has retired & so do we dare hope that Michigan will finally beat Ohio State?