That was almost the case this week. All worries were put aside & everything seemed right with the World. Except, of course, the monies put in hedges to protect long positions. Not just ordinary hedges, but exceptionally performing ones like Gold, Silver and Treasuries. This week, especially Thursday, showed again that hedges end up costing more in lost returns than actually providing positive returns to protect long positions. For example, $GOLD, the new American Barrick, fell over 7.5% on Thursday (& fell by another 2.5% on Friday). What about Treasuries? From The Market Ear on Thursday afternoon: 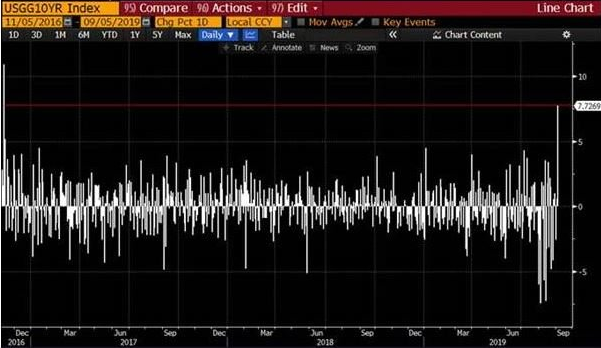 Well, Hong Kong’s Carrie Lam announced that she was withdrawing the extradition bill that had inflamed Hong Kong’s protesters & she also agreed to discuss their other demands. And the temperature of US-China dispute began visibly cooling down. That was enough to rally the S&P by 31 points on Wednesday, a 50% bigger rally than the 20 handle decline on Tuesday.

Then on Thursday, European bond yields shot up on unexpectedly hawkish comments from ECB officials against Draghi’s plan to get even more dovish next week. If that wasn’t enough, Boris Johnson’s defeat in the UK Parliament removed a big fear at least for the short time. That was enough to rally UK 30-year gilts from minus 22 bps on Tuesday to minus 4 bps on Thursday, a rise of 18 bps in 2 days. The UK 10-year yield also rallied by 18 bps in those 2 days, while the German 10-year yield rallied by 11 bps. Despite all this,  the 10-year & 30-year Treasury yields only jumped by 8-9 bps in those two days showing Treasury yields are being driven more by European yield movements than US data.

A more hawkish than expected ECB was enough to torch Gold & Gold Miners on Thursday despite weakness in the Dollar. And what the ECB began on Thursday, Fed Chairman Powell completed on Friday afternoon in his Zurich speech.

But Treasury yields fell after the tepid Non-Farm Payroll (NFP) report on Friday morning.  The 30-year yield fell back from the old 2.09% high level to close at 2.02% leading Rick Santelli to remark” doesn’t look like there is sustained selling pressure“. Contrast the action in TLT with the above action in GLD after Powell’s comments around 1 pm on Friday:

Both TLT & GLD fell at 1 pm thanks to Chairman Powell. But TLT recovered to close higher on the day while GLD failed to rally & closed near the lows of the day. Do both suggest that ECB will be less dovish than expected next week? After all, less liquidity from ECB will be negative for Gold and negative for the global economy & hence positive for Treasuries. No wonder the German 10-year & 30-year yields fell by 4 & 7 bps resp. on Friday.

So not only is the FOMC divided about further easings, but the ECB is also divided about if, when & by how much QE should be restarted. And how will the FOMC react to a more hawkish ECB? That makes the next two weeks interesting & possibly momentous.

The chart he is referring to is: 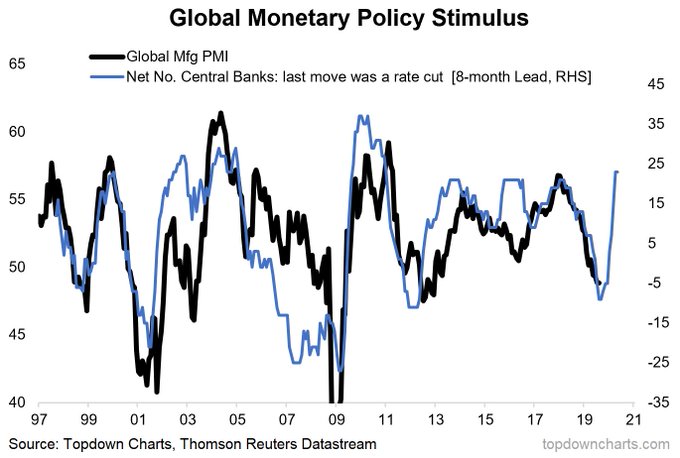 The answer, we think, rests on the strength of the US economy & whether the US consumer can keep it going. That brings us to:

2. “numbers are reassuring” or not?

CNBC’s Sara Eisen was emphatic about the NonFarm payroll numbers on Friday afternoon saying “numbers are reassuring“. She was supported by Karen Finerman of CNBC Fast Money. They both added that the “consumer is in great shape“. And their colleague Mike Santoli agreed.

We are not reassured partly because, 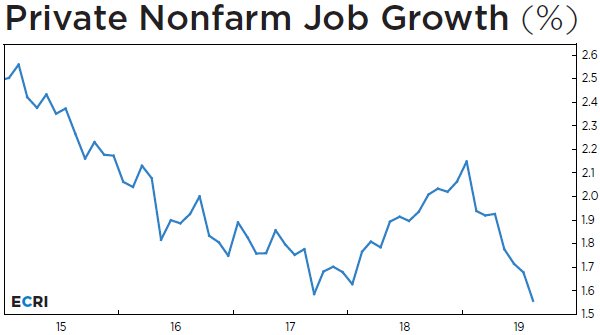 Achuthan hit the nail on the head in his article:

Guess Mike Santoli had forgotten by Friday morning what Lakshman Achuthan had told him the day before:

Then you have David Rosenberg doing simple arithmetic:

And since a picture is worth lots of words, 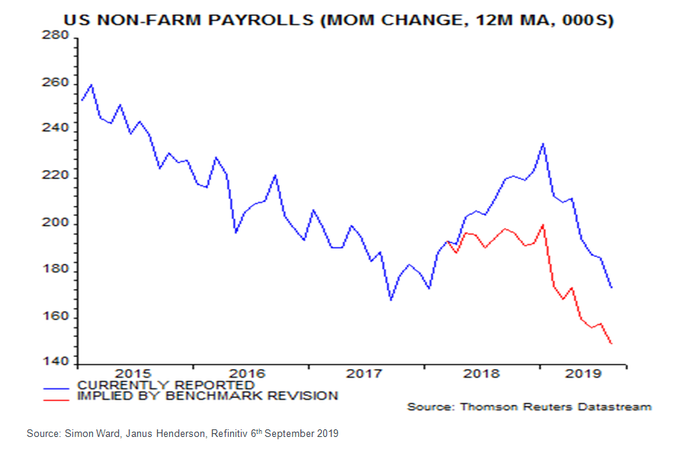 This fall in the rate of job growth gets to the heart of the problem in the US Economy. Yes, the Service Sector is 85% of the total jobs market & that is very stable, as BlackRock’s Rick Rieder said on Friday on BTV. But isn’t stability another way of describing stagnation? The bigger problem is what CEO of Snap-On Tools pointed out on CNBC last week – there are 500,00 jobs going begging because there are no workers to employ for these jobs. Another expert said this week that the number of jobs available minus number of workers is 1.5 million.

The solution seems to lie in manufacturing or industrial production. But is that likely with the yield curve so flat? Perhaps that is why Rick Rieder said on Friday that “the Fed must get ahead of the yield curve“. Jim Cramer was even more emphatic in his Mad Money show on Friday evening – “Rates must come down to re-accelerate the economy“.

3. Will the Fed get more political?

When asked by BTV’s Jonathan Ferro about the Dudley’s comments what the Fed should do about President Trump, Larry Kudlow was appropriately & almost uncharacteristically blunt:

Kudlow added that, based on his private conversations, Fed officials were horrified by Dudley’s comments. What effect that might have on the FOMC’s decision on September 18 remains to be seen. But we wonder whether this intensely anti-Trump FOMC might actually get much more pro-Trump in the near future.

If you think we are nuts, ask yourselves whom would the Fed prefer as President – Donald Trump or Elizabeth Warren? The more focused question would be – which candidate has been & is likely to be much more hostile to the US Banking sector & by extension towards the Bank’s regulator, the Fed?

These are not idle questions. The Democrat candidate with most momentum is Elizabeth Warren. As that becomes more & more obvious, we do think President Trump would appear lot more likable to the Fed than Ms. Warren. Of course, that might be too late to save the growth trajectory of the US economy.

Speaking of the Fed, we were astounded to see the following. It is presented below without comment: 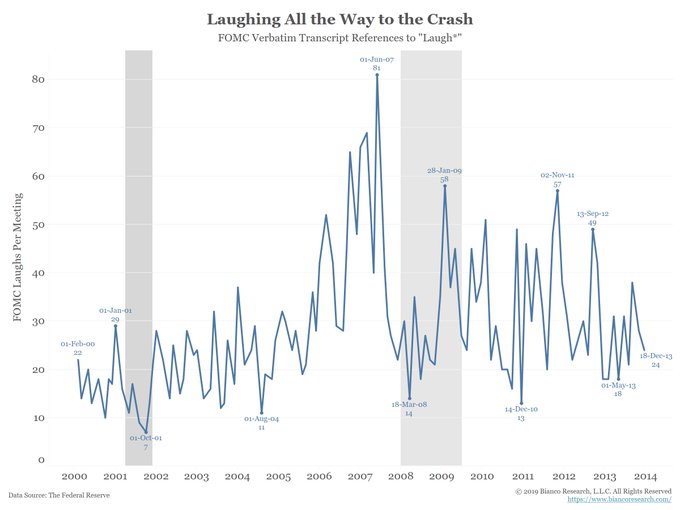 And what did Fed Chairman Powell say on Friday afternoon in the Q&A?

The big question is whether Thursday’s crash in Treasuries was a flash event, a typical Poisson Jump, or the start of an unwind. One hedge fund manager is clear: 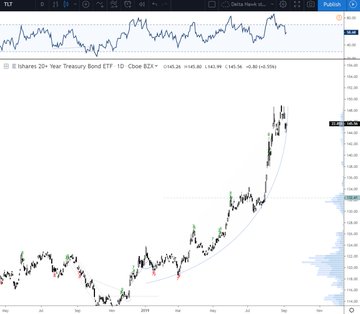 But a great deal depends on what Draghi-ECB say & do next Thursday and what the FOMC does & what Powell says the Wednesday after. And the positioning seems to argue against a long & major selloff:

This is reminiscent of the fall 2007 rally in which Treasury rates rose & higher yielding credit rallied hard with stocks & EM assets. Then came November 2007 and illiquidity amplified that collapse in credit.

The man who has reportedly made money in every tactical & strategic bond bull market since 1982 is Gary Shilling. We urge all to read his opinion piece of this week titled Treasury Bond Yields Have Yet to See a Bottom. Remember Dr. Shilling does not buy Treasuries for their yield. He buys them for capital appreciation. So what is his fundamental rationale?

What potential return does he see?

Remember Bob Michele, Head of Fixed Income at JPMorgan Asset Management who said weeks ago that the 10-year yield was going to ZERO? He reiterated his reasoning this past week on CNBC Fast Money:

Hear him with the Q & A below:

You need something on the fiscal side, Bob Michele on CNBC.

The big question is who is right. 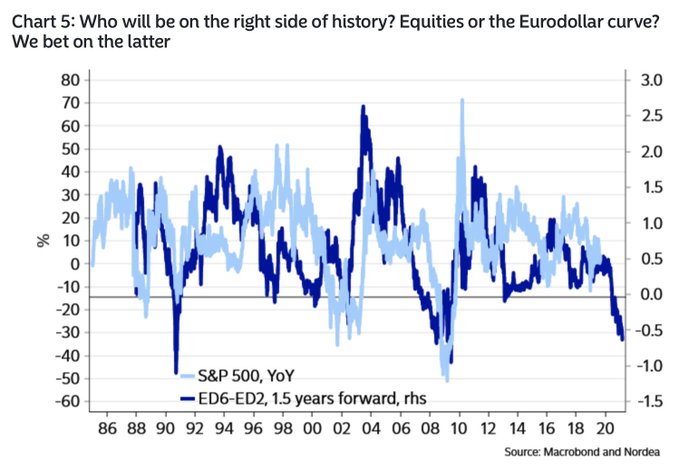 Ultimately, perhaps. But what do charts say about short term? 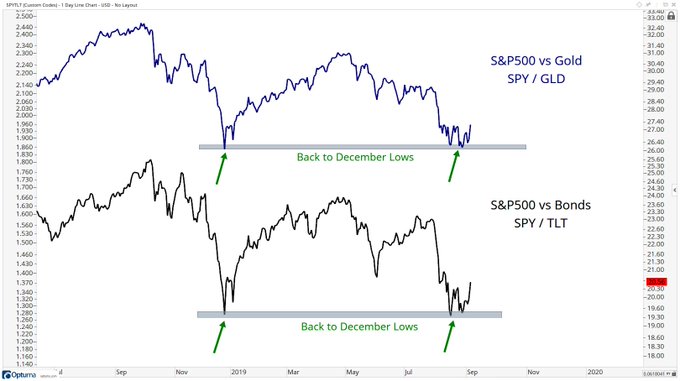 Remember the clip of Jim Cramer we featured last week:

Since that evening, the Dow has rallied by over 1,000 points (625 points Wed-Fri last week & 394 points this week). Kudos to both Larry Williams for making a great call & to Jim Cramer for recognizing it & featuring it on his show.

Last week, Lawrence McMillan of Option Strategist had pointed out that “both equity put-call ratios had rolled over to buy signals” late last week. This week, he got his close over 2950 & wrote:

Another smart trader we follow also turned bullish this week: 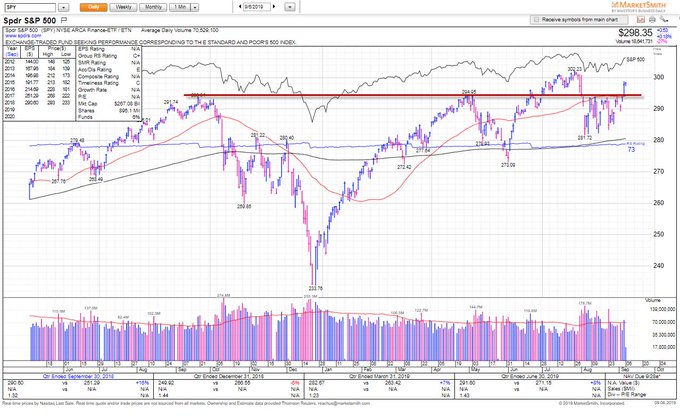 Remember what Jim Cramer had said about the call by Larry Williams? That the rally should be sold by end of September in preparation for an October swoon. This week, another relayed a similar call with a seasonality chart: 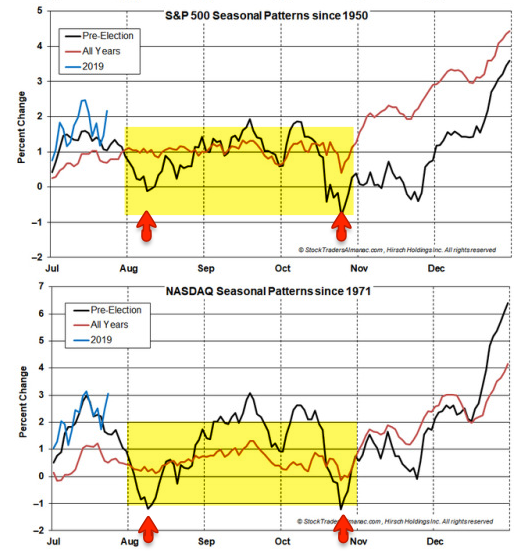 But discretion is the better part of valor, right?

And as The Market Ear pointed out:

Finally, given that China-US are soon to be talking again, doesn’t the below make sense? 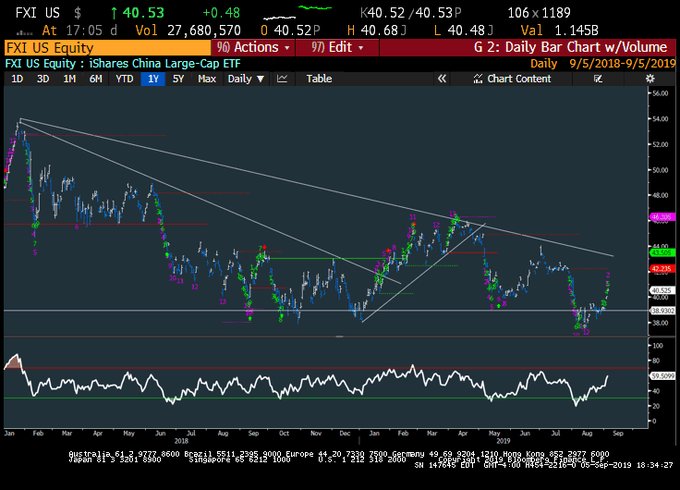 The US Dollar fell after reaching the 99+ level earlier in the week. Was that fall the result of the hawkish turn in the ECB against Draghi’s QE plans? If so, what happens to the DXY could well depend on what Draghi is able to pull next week.

If the ECB decision is less dovish than what Draghi wants, then the Euro could strengthen & the Dollar would fall. But Gold, silver might also fall because ECB is not delivering as much liquidity as expected. But if ECB goes along with Draghi, then the Euro could fall, the Dollar strengthen & Gold/Silver could rally hard. Is this weird or we are simply being dumb? It would not be the first time of course. And then we just don’t get Europe.

At least Mr. Vallee is not confused:

This time, Mr. Vallee has company: 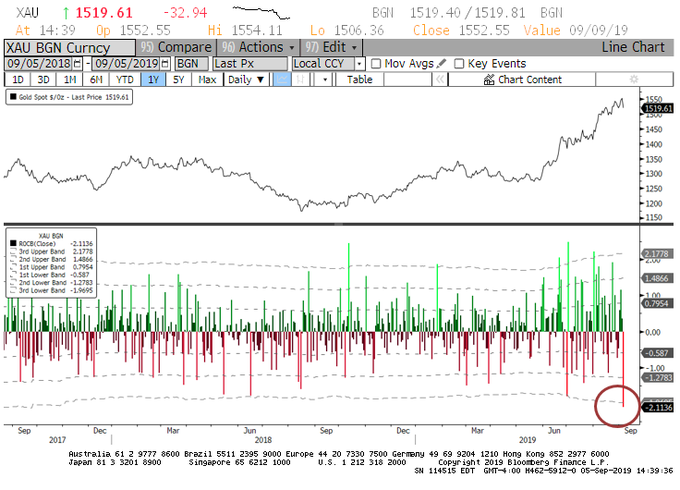 Then there is the other anomaly. Or is that just a sign of an irrational bond bull market?