1.What a spectacular rally?

We are, of course, talking about the famous Quant crash of August 2007. We can still recall the furious burst of analysis & discussion that followed that crash on Fin TV, mainly between people who didn’t really know much. Then really smart people like Andrew Lo of MIT stepped forward & pointed out the simple fact that positions had been uniformly overcrowded & one day people started exiting.

In contrast, the current stock rally is only about 3 weeks old and is about 2/3 rds as strong. We begin this count from August 26, 2019, a day before Jim Cramer featured the spectacular call from Larry Williams to buy S&P before labor day. One big difference between the September 2019 momo crash & the August 2007 quant-momo crash is that the September 2019 crash happened without even a minor sell off in stock indices.

That is because the current momo-crash began in the interest rates markets & spilled over to US momo stocks. Just look at the chart below of the MTUM, Momentum ETF and TLT, the long-duration Treasury ETF from The Market Ear:

So is it possible that this sell off, just like the August 2007 sell off, is simply people running for exits from  overcrowded positions, in this case bond positions. After all, the multiple sigma up move had been into long duration sovereign bond markets – Treasuries, German Bunds & other Euro sovereign markets. And these positions were confronted with a major event, an event that could create a volatility spike, if not a an actual crash.

That event was this week’s ECB meeting & the intense speculation about what Draghi could do despite the intense opposition within ECB. So the exit from Bunds & as a corollary from Treasuries began the week before with the German curve up 8-10 bps in yield. Then this week accelerated the sell off into the ECB meeting on Thursday morning.

Draghi did everything they expected of him and more. He lowered rates, resumed QE for an indefinite term and Bund rates & Treasury rates fell hard. And Treasury perma-bulls. including one guest on CNBC Squawk Box declared victory & predicted 1.40% yield for the 10-year Treasury.

He should have waited a bit because, as The Market Ear pointed out, “German 10 year yields rose 14 points” from Draghi lows. Treasury yields also rose fast & furious with the 30-year yield shooting up from about 2.17% post Draghi to about 2.27%. 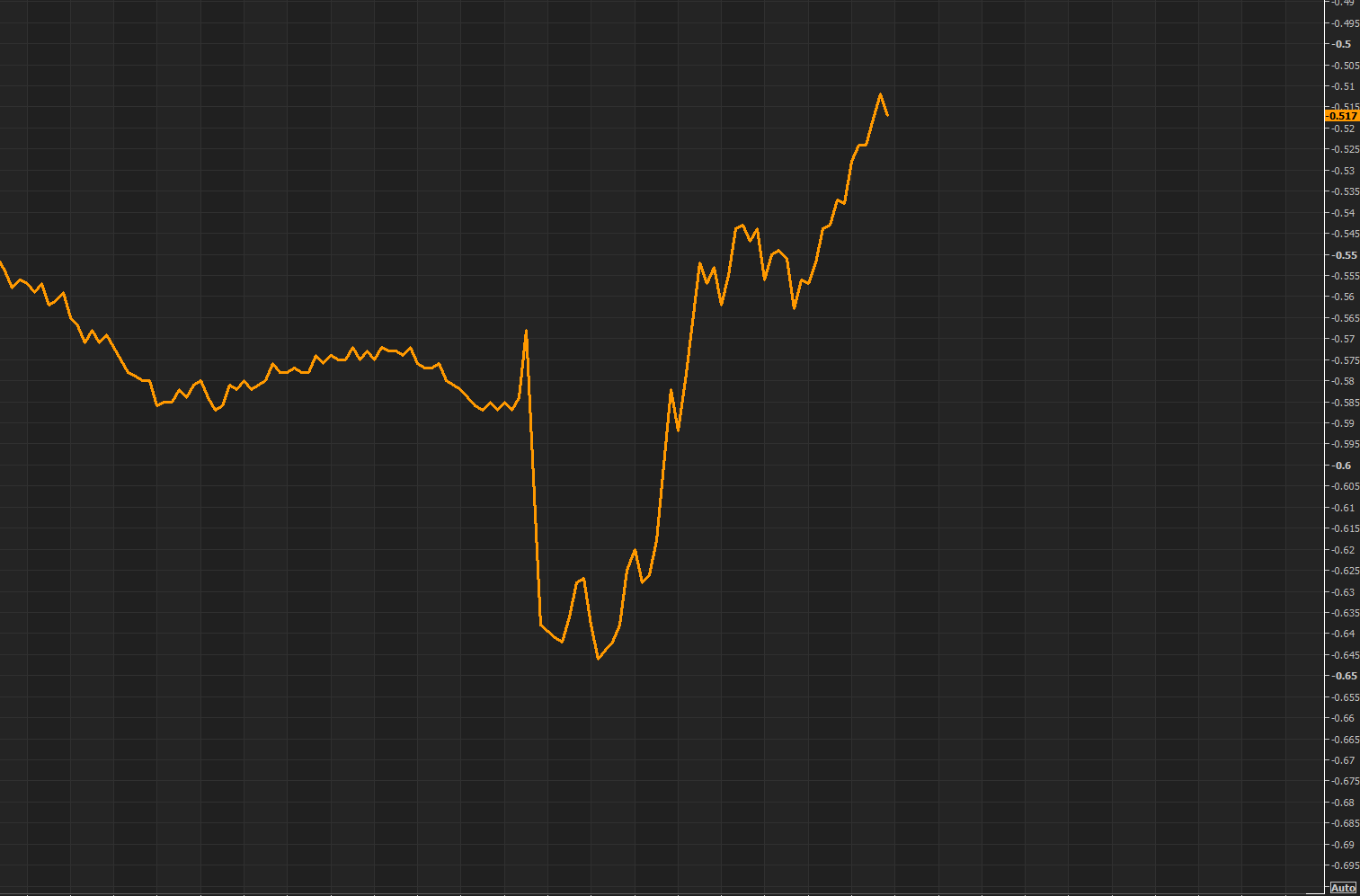 What happened? Why was the Draghi action so completely & decisively discarded? Was it the realization that Draghi is gone and with him goes his extreme dedication to negative interest rates? Was it the new belief that Christine Lagarde, Draghi’s replacement, is likely to focus more on fiscal stimulus instead of monetary stimulus? Was it also the specter of new longer duration supply of a 50-year Treasury Bond from Treasury Secretary Mnuchin? Was it also the widespread belief that the Trump Administration would float another tax cut next year?

Aren’t such doubts enough to cause a total rush to the exits? Especially with so many new positions from uncommitted longs?

In to this steps in Fed Chairman Powell & his FOMC next week. It seems they are locked in to a 25 bps rate cut. But how do they message it? Another insurance-type rate cut with a hawkish data dependence message? He has done that three times as we recall, October 2018, December 2018 & July 31, 2019. The first time, the bond market sold off very hard, the second time the stock market sold off very hard & the third time the bond market rallied extremely hard, almost parabolically so. 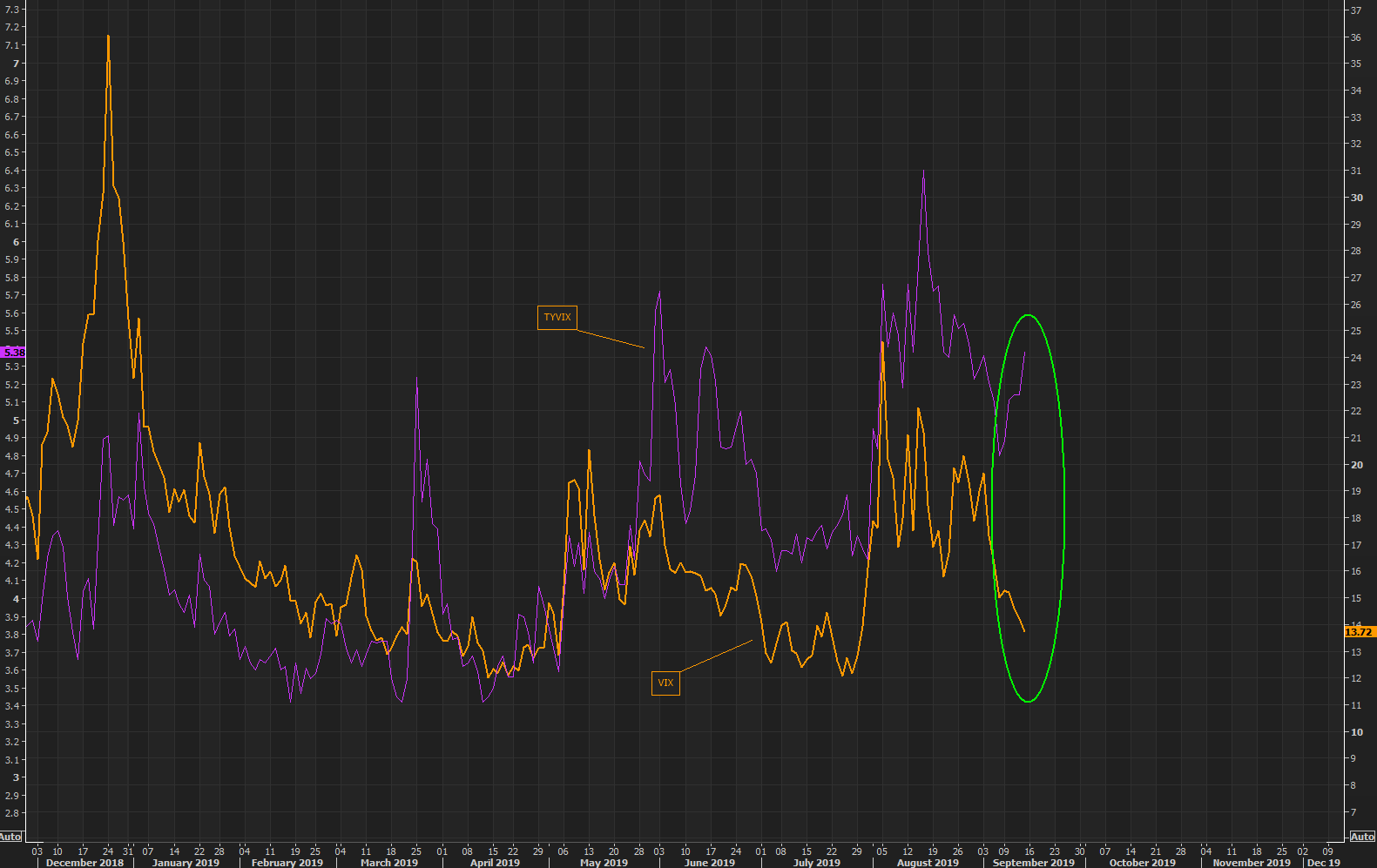 Don’t forget the history of this Fed. First & foremost they want to show the world that they are independent of President Trump. So they go out of their way to sound more hawkish & wreck havoc in markets. Secondly they take their economic inputs from the stock market & they get more hawkish as the stock market rallies. And finally this is a FOMC that might be even more divided than the ECB.

That is why the parallel of the August 2007 rally concerns us. That spectacular rally, we think, persuaded the Bernanke Fed to go slow on cutting rates and by the time that stock rally had ended it had become too late to overcome the weakness seeping into the economy. That rally ended with a new high in October 2007 and apres that came the deluge.

History does rhyme & we are nervous we will hear it rhyming again if the Fed doesn’t cut rates & tell the world that they are committed to getting in front of the yield curve. This was expressed more intelligently by Jim Caron of Morgan Stanley this week in arguing for 2 more rate cuts this year & 2 rate cuts next year:

As any one who has bought a strip even once knows the 30-year zero coupon strip is only for the extremely agile & bold. Because it does not fall like a knife but like a guillotine that takes off any body part it meets in its downward trajectory. It proved its mettle this week by falling 9% on the week.

Unfortunately many new entrants to the Treasury market did not know that. And one of them spoke about zero coupon strips ETFs on CNBC Half Time Report asking “this is supposed to be safe money?” This man is said to be a CIO of a Money Management Firm & talks like Muhammed Ali while exhibiting the expertise of Pancho.Who was Pancho, you ask? – Watch the last 30 seconds of the press conference from the movie Secretariat:

We don’t care about loudmouths & braggarts on CNBC Half Time except for the sad fact that these people misinform viewers & expose them to risks. Not long ago, this guy was extolling the virtues of 60-40 stock-bond portfolios when stocks were down & bonds were up. Now he jeers long duration strips about not being “safe money”. And this man sits on the “investment committee” of CNBC Half Time report!

At the other end of the spectrum is Carter Worth of the evening CNBC Fast Money show. He actually went the other way & suggested the fall in TLT might be over & it might be worth begin buying TLT. Listen to his studious & serious discussion:

He is not the only technician who thinks 1.90-2% is a decent buying level: 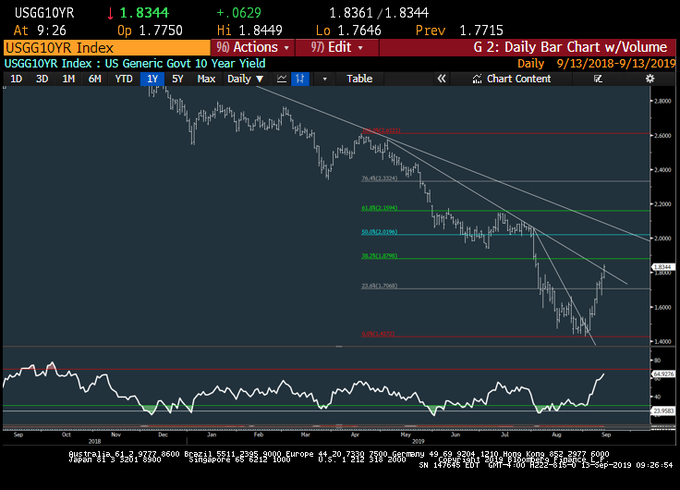 And some one who was right during the downward move in yields:

But some one said Buy Now & not just Treasuries but that most two-sided Treasury weapon of all, a Zero Coupon Strip ETF. The award for smart bravery of this week goes to Rob Sechan of UBS who said Buy EDV (Vanguard Treasury Zero Coupon ETF) as his final trade on Friday’s CNBC Half Time Report. EDV was trading at that time at $133.40.

What a rally it has been since Jim Cramer featured the Larry Williams call on Tuesday August 27! The Dow has rallied by 1,442 points & the S&P by over 250 handles. While the stock market looks overbought & ahead lies the Fed, what seems like a sensible strategy?

Isn’t that a sane strategy at a new all-time high? 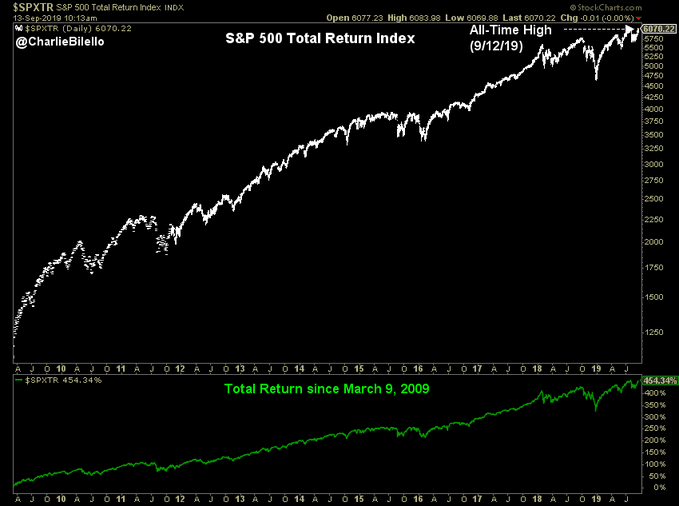 That is what worries is. We are not negative on US equities & actually we expect nominal new highs in the upcoming weeks. But we think the Fed will remain behind the curve & the slowdown in US economy, especially US profits, will continue. Right now, the stock market is resilient & bound into hopes of a China-US trade deal improving profits of US companies.

But people like Richard Bernstein, Mike Wilson of Morgan Stanley & others are warning of slowing profit growth. That doesn’t register until one day it does. Just like the stunningly large correction in momentum vs. value this week. There are at least a few who think this week’s “momo-crash” is a signal of a top of some kind. One of them is Doug Ramsey of Leuthold Group.

Gold was a companion of Treasuries in their joint explosive move before rates & gold both started falling. This week Gold fell again after rallying briefly post-Draghi. So if rates rally soon, could Gold rally too? 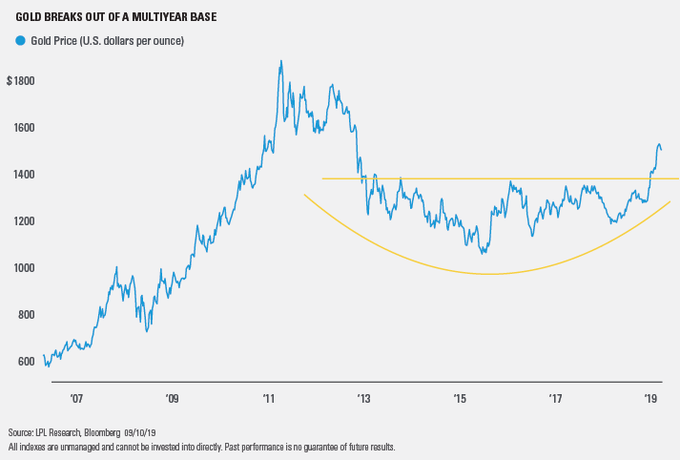 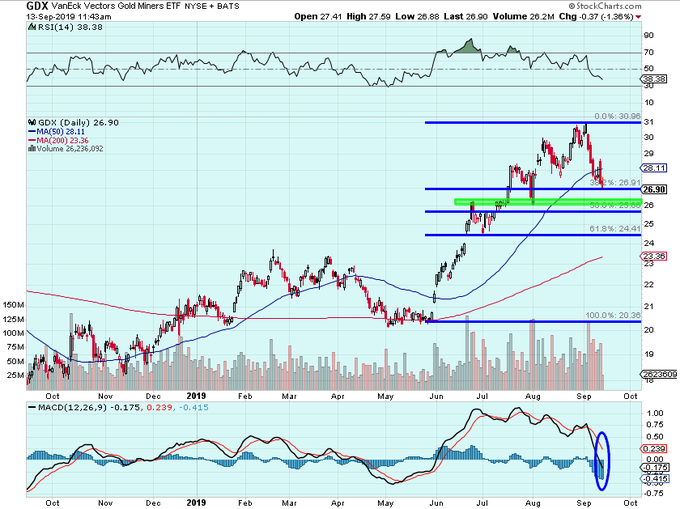 Go back to the Jim Caron clip in section 2 above & listen to CNBC’s Guy Adami say the following from minute 6:50:

We heard that & immediately thought of the reality in that land of the religiously pure or pak-i-stan. Many  parents there refuse to vaccinate their children against communicable diseases because they think like Guy Adami. The fact that other kids are getting vaccinated actually makes them more determined to not vaccinate their own children.

The difference between the two examples is that keeping a kid back for a year doesn’t expose him/her to any communicable problems from other kids who go ahead. But preventing a kid from getting vaccinated exposes that kid to actually getting that disease from other kids or teachers.

Guy Adami’s example would make sense if the Federal Reserve were on Mars while all other central banks were on Venus without any communication/exchange between them. His example would also have worked in the Stone Age when countries in different continents had no means of communicating with each other.

We were going to laugh at Guy Adami when we suddenly realized that people who think like him were responsible for the 2008 CDO bust & the credit crash. They were mesmerized by the Gaussian Copula invented by David Li, a Canadian-Chinese economist/mathematician. Simply put, David Li created a  multivariate function to accurately track multiple single variable functions.

Li’s copula was applied by the Ratings Agencies & Investment Banks to create risk models for CDOs that contained large numbers of debt securities. Such portfolios were previously too complex to price. With Li’s Copula, models were built to analyze risk of defaults & used to give AAA ratings to higher CDO tranches.

Like Guy Adami, these experts at ratings agencies & investment banks forgot or ignored the central assumption in Li’s copula – that correlations between the different elements of the copula (individual tranches/securities within a CDO) don’t change. Unlike kids kept separately in Adami’s example, correlations between different securities/tranches within a CDO changed dynamically in live turbulent markets. That created results totally different than the ones predicted by Li’s copula. And safe AAA tranches were infected by what happened to lower rated tranches etc., etc., etc.

David Li was supposed to get the Nobel Prize for his copula, as we had heard from a hallowed temple of the Applied Mathematics community. Unfortunately for Mr. Li, the 2008 bust came before that prize could be conferred. So, even more unfortunately, David Li was vilified in a now infamous article in Wired magazine titled Recipe for Disaster: The Formula That Killed Wall Street.

Even more unfortunately, Guy Adami showed this week that there are many in the investment world who still don’t understand how seemingly different entities/markets/securities are linked & how changes in their correlations can create havoc in markets.

It is our fervent hope that the people at the Fed do understand. Because if they don’t, then over-positioned, over-leveraged markets could get a lot more turbulent in the weeks & months ahead. Just look back to the Quant crash of August 2007 and remember what that led to in 2008.