Two days of melt-up in one week; $VIX closing the week below $13; Treasury yields rising almost every day of the week; yield curve un-inverted; value stocks outperforming, EM markets outperforming the US indices – Everything the Fed would have wanted to see 2-3 months ago is happening before our & their eyes.

So what do they do on Wednesday? We think they will cut rates by 25 bps just to avoid being blamed for any market turmoil in yet another Q4. But will they signal a hawkish posture after this upcoming rate cut? If they do, hopefully they will be gentle & circumspect about their forward posture.

We think they have but one master – the stock market. And we think they know how to keep that master happy. This 2019 Avataar of QE is not called that; instead they call it “Not QE” . Fin TV anchors have hardly noticed it. Perhaps they shy away from the technical name “Repo” or perhaps they don’t want to jinx anything. But others have. 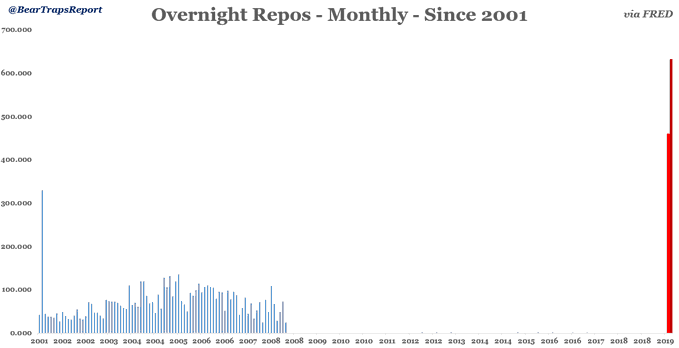 As Jim Bianco said in his interview for the The Market,

But having already done an “unprecedented” amount of “Non QE” liquidity injection, should the Fed add even more?  Yes, adding liquidity is a better alternative to cutting interest rates said BlackRock’s Rick Rieder this week: 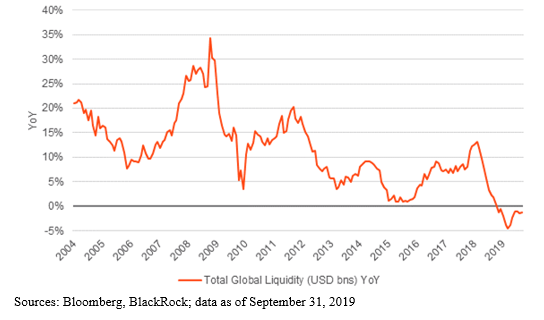 Guess Rates can cut both ways but liquidity adds only work one way!!! Hmmm!

But you have to admit this could please all stake holders of the Fed. Addition of liquidity should be positive for US stocks, negative for the US Dollar and even raise rates a bit more. Keeping overnight rate steady should help savers, especially senior citizens, get decent interest on their savings. President Trump might be mollified with a stock stock market into Q4 & beyond. Also the Fed doesn’t have talk about it especially if they don’t announce the amount of liquidity they intend to add. And such quiet injection of additional liquidity may even satisfy the naysayers on both sides of Powell in the FOMC.

What does all this including the stock market performance so far remind some who choose Ear over Eyes? The year of the Tepper Corollary – 2013. If the economy weakens, the Fed will ease in addition to injecting liquidity. That is good for stocks. If the economy does not weaken, then isn’t that good for stocks with fears of earnings recession abating. 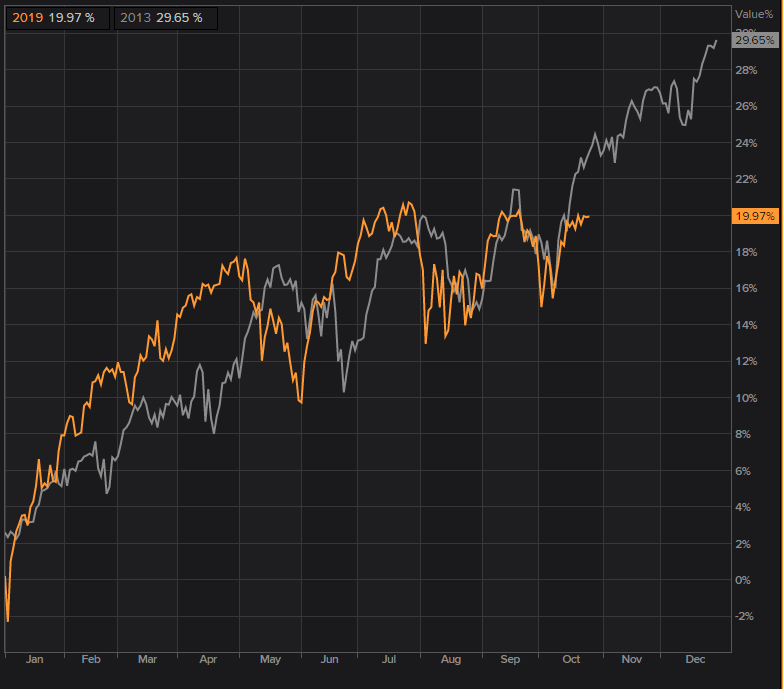 But as The Market Ear added,

Would next week suffice as “asap” for them? On the other hand, DeMarkians are saying Not So Fast: 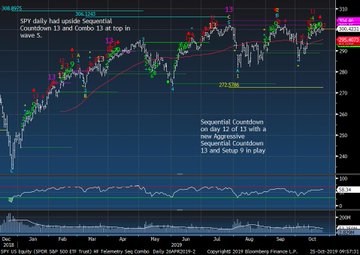 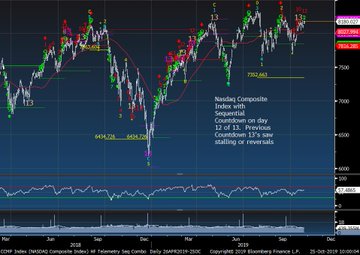 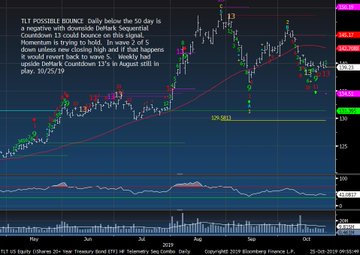 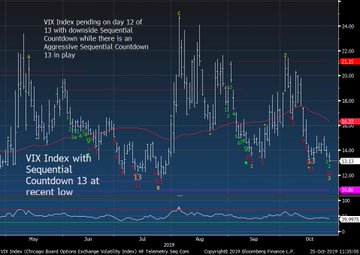 Interesting. Does this suggest the Fed will take their time to either add or announce addition of liquidity? Or will this DeMark stuff lose its potency in the Fed’s liquidity enhancing “Not QE” just as it had proved unreliable during real QE periods under Bernanke & Yellen?

We have been reasonably confident that the S&P will get to new all-time highs this October prior to the FOMC on October 30. But we have also been worried that the FOMC will misread the market’s signals as evidence of economy on the upswing & cause a reversal in risk vs. safe sectors as the FOMC did on October 31, 2007.  This week an astute observer/analyst named Jim Bianco expressed similar misgivings in his Swiss interview:

On October 31 2007, the FOMC felt the markets were fine with what the Fed had done until then. They never understood what the economy was telling them.

We will find out next week whether the 2019 FOMC understands what the economy is saying right now.

And he noticed that something had crossed below the zero-line: 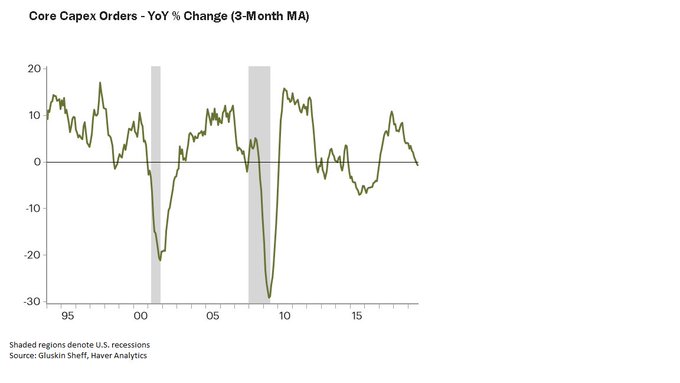 Yeah, yeah! Who cares when the consumer is strong or “fabulous” as a CNBC anchor said recently? 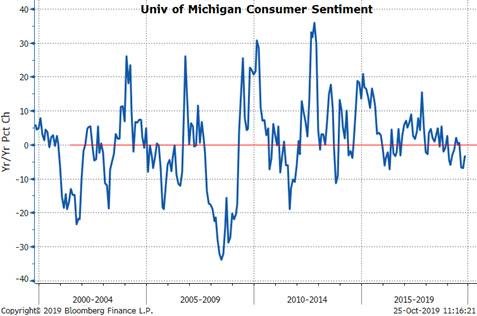 As we have said before, when these two ex-colleagues agree, it pays to listen. Their timing may be early as it was in 1999, but they almost always end up proving right together.

What did Jim Bianco say about the economy & bonds in his interview?

First a summary of the indicators from Lawrence McMillan of Option Strategist:

What about $VIX falling to a 12-handle? 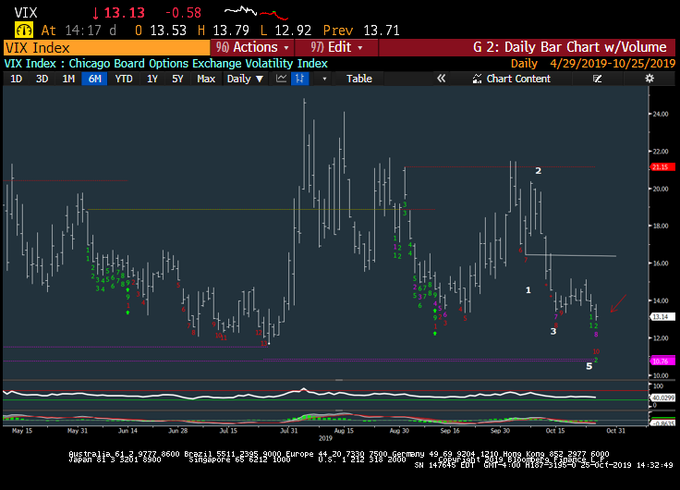 He also sees a potential rollover in breadth: 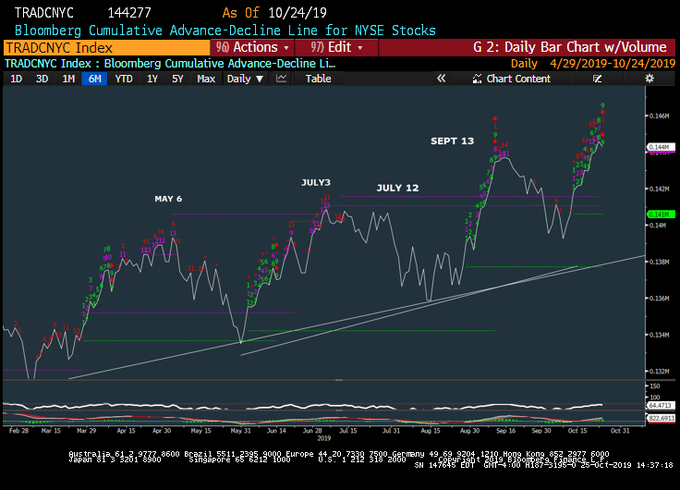 Then you have his virtual sacrilege of doubting the semis: 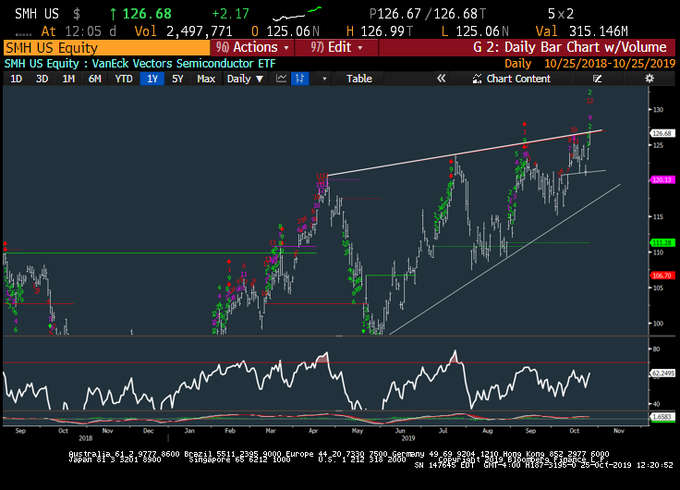 The above are short-term considerations. What about longer term? 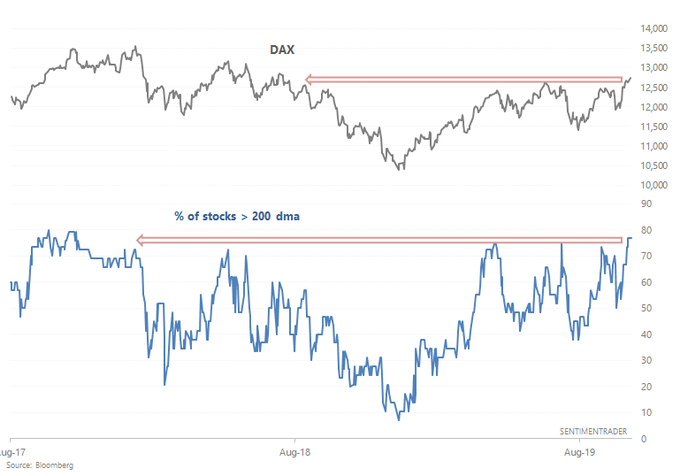 Remember what QE did to the U.S. Dollar & Gold? That is not the main reason Jim Bianco is bullish on Gold:

5. Saint Crispin’s day – “like a Rooster with an itch“

Friday was Saint Crispin’s day. CNBC’s Mike Santoli remembered that & used some of the phrases from the famous St. Crispin’s Day speech (from Shakespeare’s Henry V) in his closing comments to CNBC’s English anchor Wilfred Frost.

That reminded us of our favorite recitation of that famous speech & that too by a proud member of a DD team:

The marvelous Danny Devito plays an instructor at an army base brought in to get a group of DD soldiers into the passing grade at their Drill camp. Everyone at that base had given up on these DD (dumb as dog***) recruits.  He uses Shakespeare to motivate & teach these students. The film Renaissance Man is a superb film. Watch the interplay as Devito explains Simile (“like a rooster with an itch“) & Metaphor to the students:

The 5-day celebration of Diwali began on Friday and the central day is Sunday, October 27.  We recall here the ancient Shaanti-Mantra for universal good: