1.What moves the US Stock Market?

The answer is Dr. Kudlow & his reassurances about being so close to the “deal” with China. We all know it but a picture is worth so many words.

That may be why Jim Cramer warned in the first segment of his Mad Money show on Friday that if we don’t get some news about a trade deal over the weekend, the US stock market might give back some gains on Monday.

Even some believers in the 2013-redux are worrying about dizzying heights. 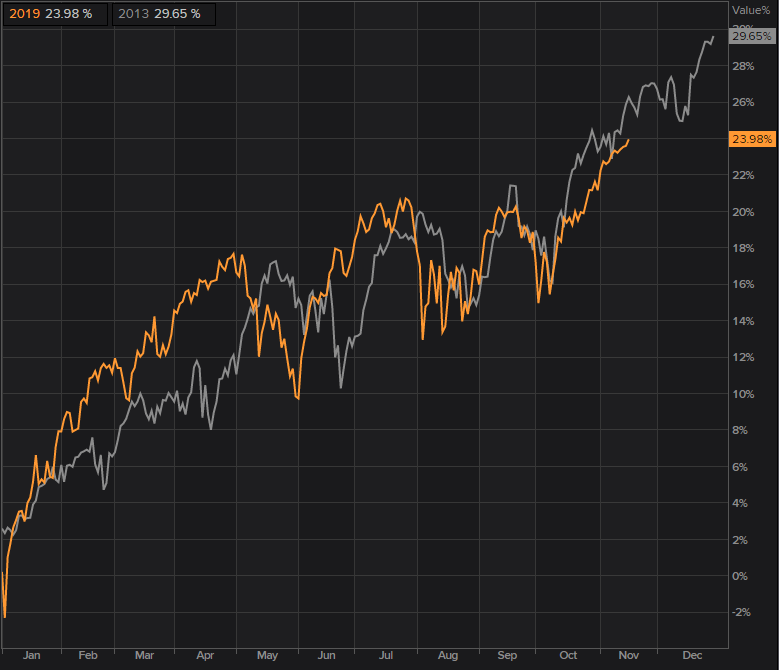 Even in 2013, early December provided a nice buying opportunity. So it would be par for the course to get a pullback anytime. But what might we see later this quarter? Based on one historical precedent, a 5% higher target might only be for the faint of heart.

Our own view of year-end rally has been shaped by what we heard from Abby Joseph Cohen in October 2000 – that an year-end rally is a given unless there is deflation on the horizon. So despite all the negatives we see & hear (some featured below), we still think that a rally to close out the year is a safer bet. After all, will the good doctor Kudlow play the grinch & tell us no deal is more likely than a deal? We don’t think so.

Once again, Chairman Powell took a victory lap & put up another “Mission Accomplished” this past week. His own regionals seem to disagree. 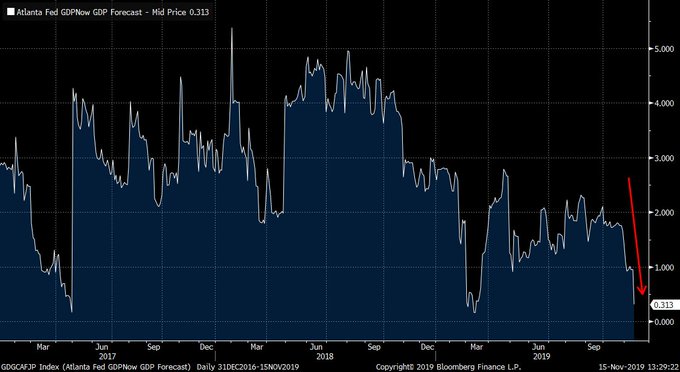 But wasn’t the AtlantaFed methodology deemed unreliable especially when contrasted to other regionals, especially the NY Fed? 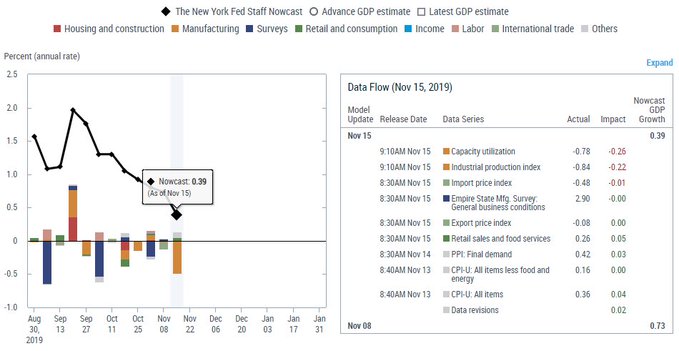 That is not good news for the “Mission Accomplished” banner of the Powell Fed. But what might actually be worse news? 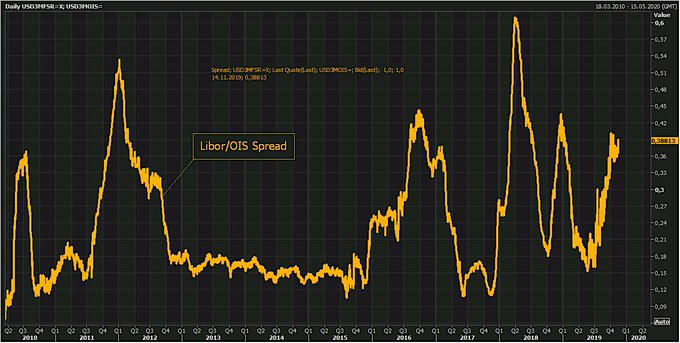 So the US Repo market is not healthy despite the large injections of liquidity by the Powell Fed? And that too when we have December staring at us, year-end being the peak of Repo illiquidity? So why didn’t we hear anything about the Repo market from Chairman Powell?

Could they have actually have the opposite problem now? 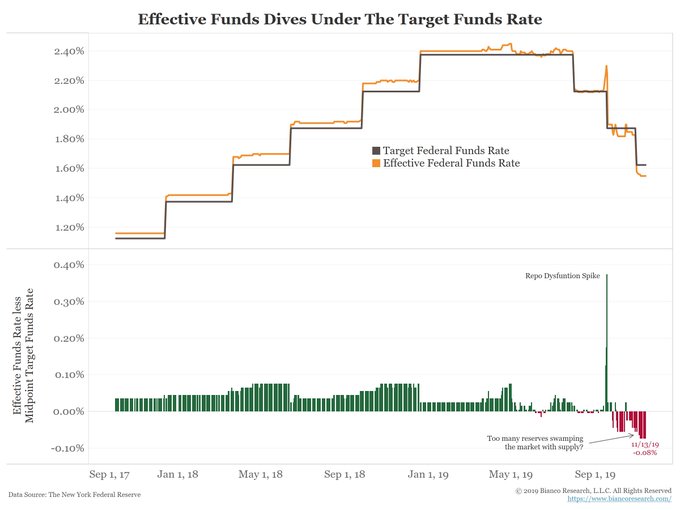 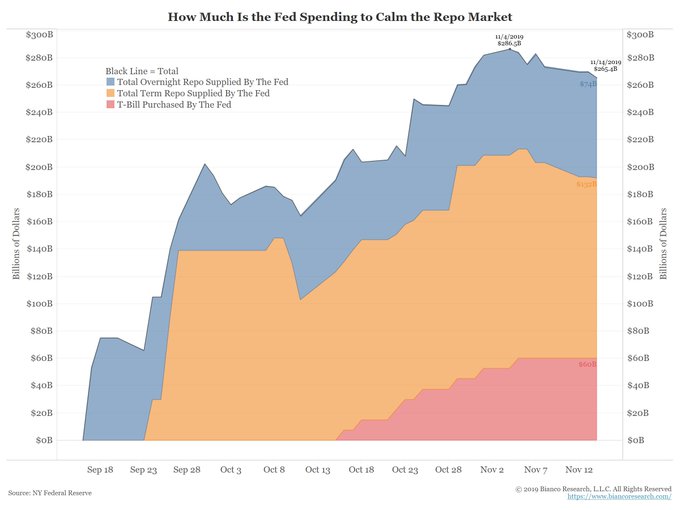 So how do they solve this problem of the effective Federal Funds rate falling below their recently reduced level? Will they lower rates in their December FOMC meeting on a tactical basis? Hard to do given their Mission Accomplished & “appropriate place” self-congratulatory pronouncements, right? Or do they move to longer term repos as they partly did this week? Or do they actually drain reserves? We can’t believe they will drain reserves into year-end. That could become not merely your average grinch but a Darth Vader grinch for the stock market rally.

So how can they address the rising US Libor-OIS spread, depicted in the Holger tweet above?  If you look carefully at the 2012 column of the Holger graph above, you get one answer – transform current “Not QE” into a full-blown QE as was done in 2012-2013.

That would address the gripes of some Debbie Downers and make the Fed consistent with market behavior: 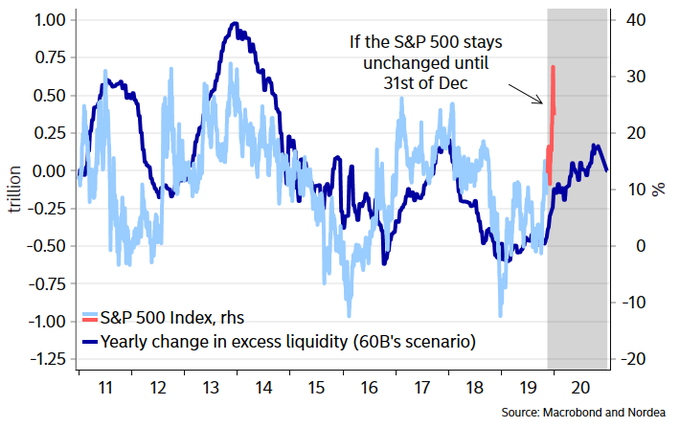 In short, cure the above chart’s deficiency by extending QE to the entire curve from today’s overnight or very short term Not QE. If they do it semi-quietly & expressly for year-end liquidity reasons, nobody would notice much, hopefully.

Kudos to Carter Worth of CNBC Options Action who, last week, had boldly suggested buying Treasury bonds & fading the month-long rise in Treasury rates. TLT was up 2.1% this week & yields along the entire Treasury curve fell on the week:

Is this a one-week phenomenon as many say or was this a reversal from yearly pivot points? 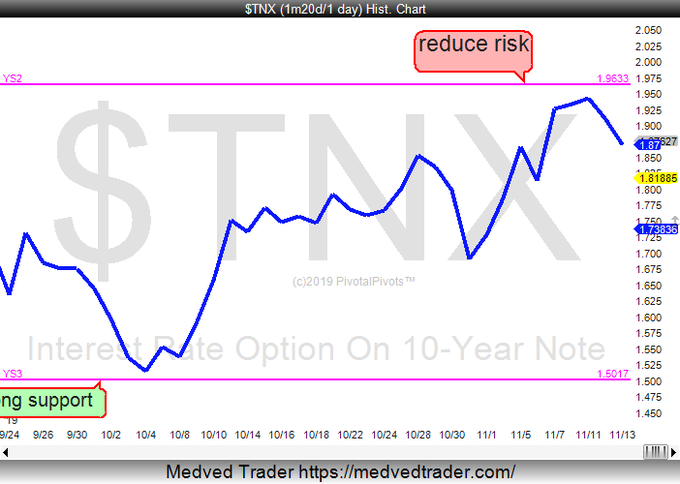 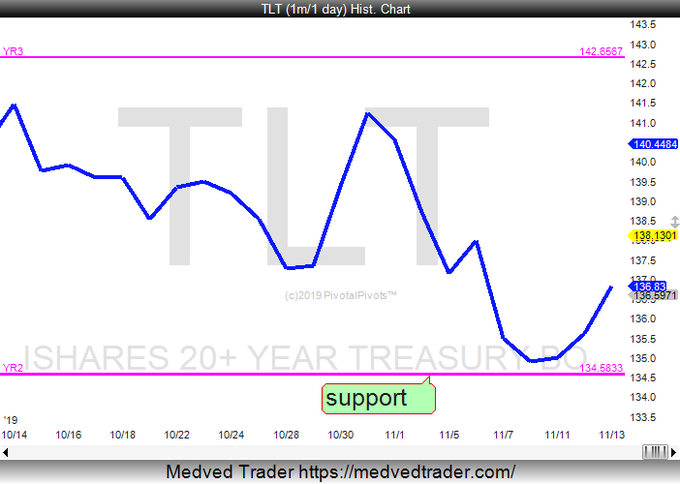 Some saw this as an omen for the stock market next week.

But is the bond market the main signal or will a more correlated signal prove necessary for a sharp pullback in the equity market?

How low is the VIX?

Is it just the spot level or is a spread giving more information?

Another view of why a Volatility Event may be on the horizon. 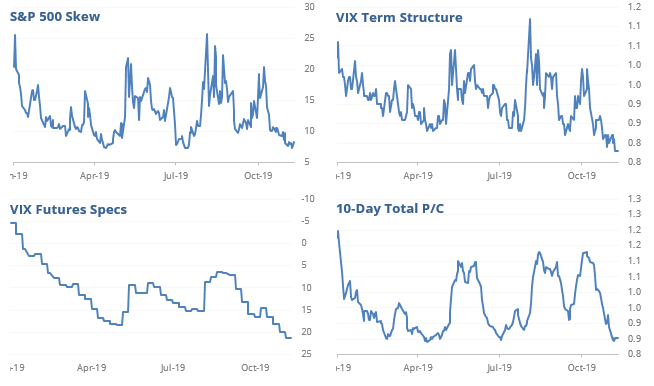 And then you have Carter Worth of CNBC Options Action suggesting the possibility of a VIXPLOSION, or an explosion in the $VIX.

And one measure of stock volatility has already jumped higher. 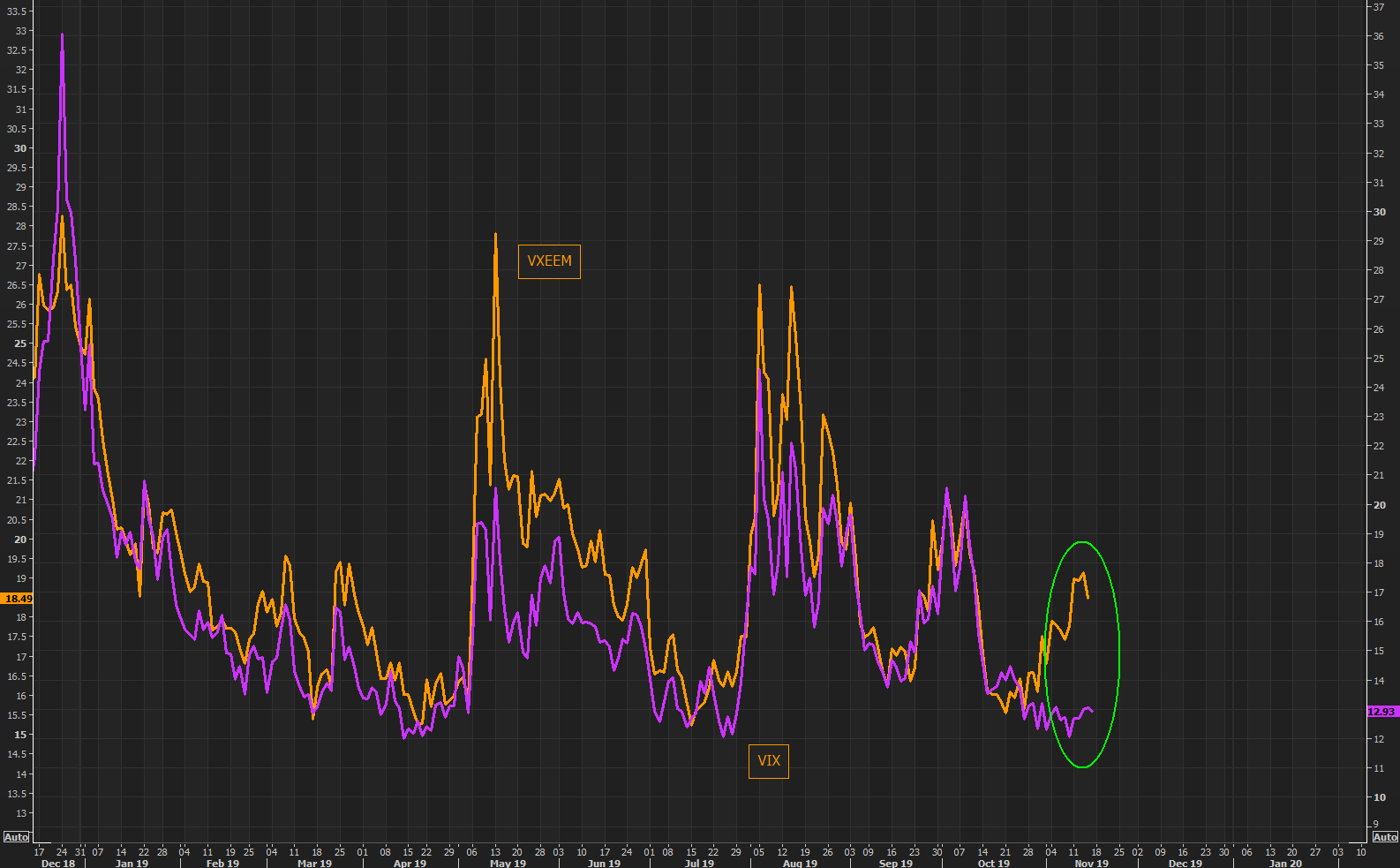 By the way, despite new all-time highs in US Indices major EM markets fell this week both in absolute terms & relative to the S&P 500.

A change in tone but not in conclusion from Lawrence McMillan of Option Strategist: 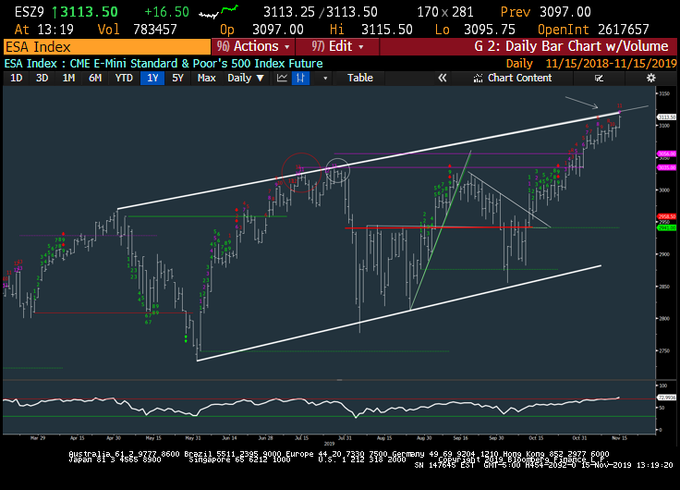 After all the above, don’t you want a positive opinion? J.C.Parets provided one this week: 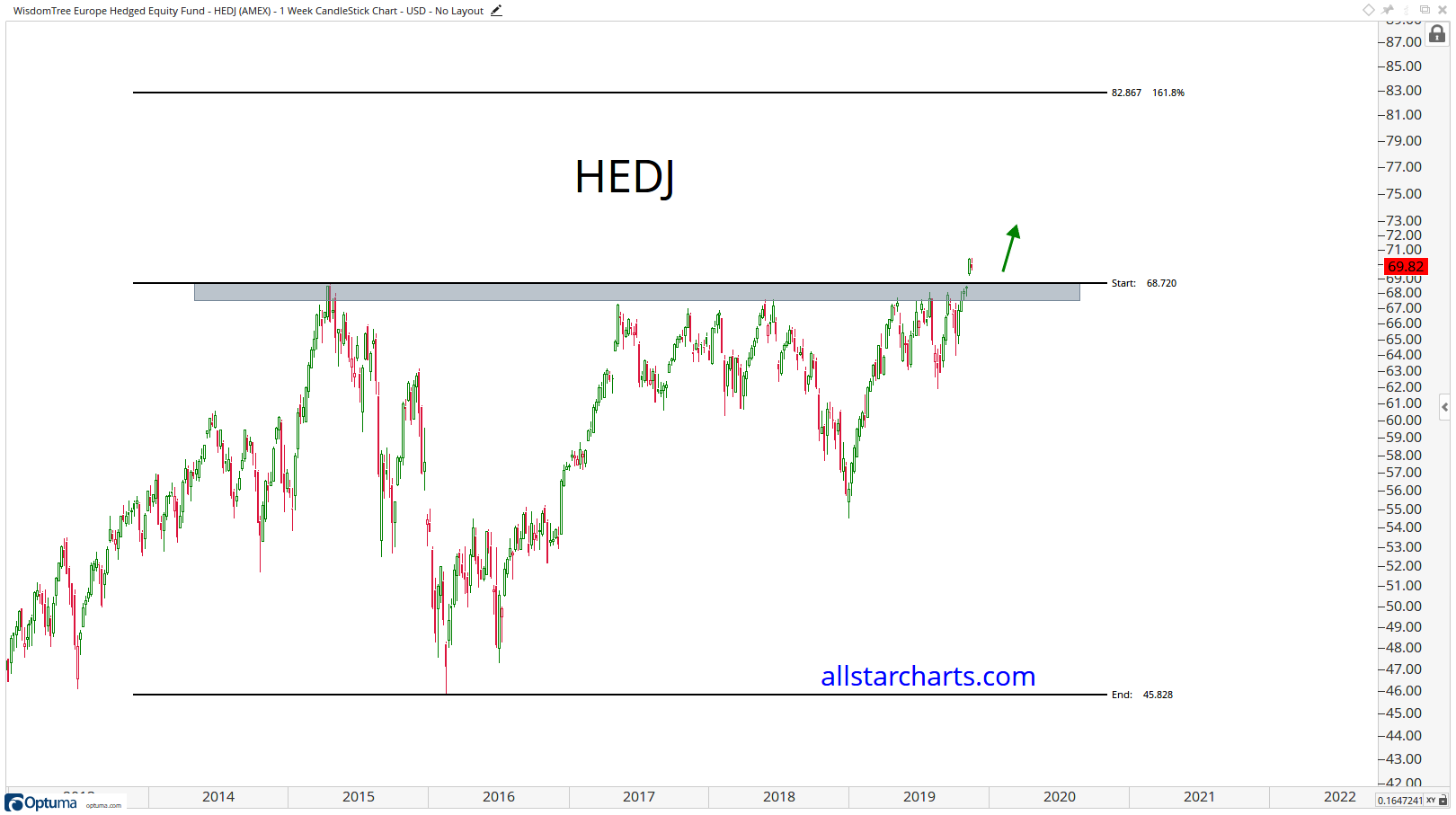 Parets wrote he would remain long as long as HEDJ was higher than $69. Interestingly, this is consistent with leading indicators rising in Europe: 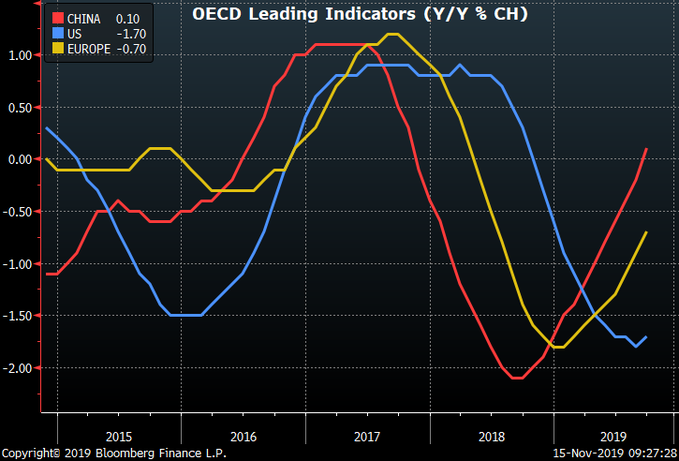 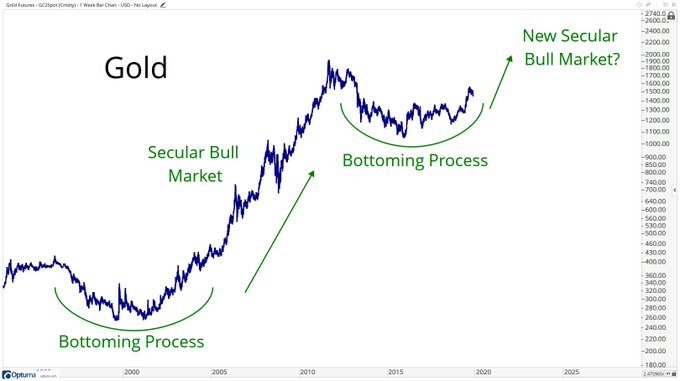