What a week! It began with the just execution of ISIS leader Al-Baghdadi by US special forces and ended with the US stock market reaching new all-time highs. These two great book-end events may have a common factor, a 5-letter word – Trump.

Look what Nobel Laureate Robert Shiller said the week before:

Others may scoff but we don’t. Because we have been following & using Shiller’s journey into what he now calls Narrative Economics, a study of “How Stories Go Viral & Drive Major Economics Events“. To us, he began this journey on March 20, 2014 by using the term Tale Risk in his Project Syndicate article titled “The Global Economy’s Tale Risks“. The term Tale Risk is a cute play on the well known statistical term “tail risk”. Shiller smartly inverted tail to tale to describe how risks can change from negative to positive because of a confidence creating leader, in Shiller’s case Japanese Prime Minister Abe:

Shiller’s article fit with our own thinking about major turning points that great leaders create on their own and we liked his term “Tale Risk”. So we used it a week later on March 29, 2014 to describe the Modi Wave in our article Why Are They Upgrading India Now? – “Wave” or “Tale Risk”?.

The Modi impact on India & on Indian markets was so large that we applied the “Tale Risk” term again in August 2014 & in November 2014.

Then came November 2016 & the stunning victory of Donald Trump over Hillary Clinton and actually over the Bill Clinton doctrine that had governed US economic policy since 1994. So on November 12, 2016, 4 days after the election, we wrote Tale Risk & a Momentous Reversal of the Bill Clinton Doctrine?:

There is no doubt that the power of the Trump tale impacted the world from the day of his election. So we  began wondering whether the term “risk” was even appropriate to describe the Trump impact. So on December 3, 2016 we wrote Donald Trump – From Tale Risk to “Tale Reward” in 3 Weeks:

But today’s Shiller has not only recognized the power of the Trump Narrative but he is also using it to estimate & predict its positive impact on the US consumer in the next year or two. Listen to him yourselves:

Remember December 2015 when “Donald Trump put forth a plan to “temporarily ban” Muslims from entering America “until our representatives figure out what’s going on”? Remember the media outrage that quickly changed to even NBC’s Chuck Todd saying the following on NBC Evening News that week:

While the political experts on TV were saying how Trump’s candidacy was finished, we heard something very different from a Muslim cab driver in Manhattan. He was not that offended by what Candidate Trump had said & added that a man who can bring up such polite well-mannered children cannot be bad. Taxi drivers know a lot more about celebrities in their city & hear a lot and, generally speaking, their opinion turns out be worth listening to.

That is why we liked what Shiller writes in his book about Narrative Economics vs.  professional economists:

In contrast, Shiller says “narratives are major vectors of rapid change in culture, in zeitgeist and in economic behavior“. He writes:

In his own words,

What would we recommend to Prof. Shiller? That he stop using the word “contagion” to describe the spread & assimilation of economic narratives. The term contagion is often understood as a metaphor for a spread of bad, malignant conditions while the spread of economic narratives can be both good & bad. And his own analysis of Trump’s example & message is a positive one in that it encourages consumer spending & pushes the next recession further into the future.

We prefer the term “assimilation” instead of contagion. After all, the effect is only realized by assimilation of the narrative & not merely by its existence. A contagion that is not assimilated in economy’s or society’s innards is almost useless, right? And an assimilation can be both good & bad while a contagion conjures up extremely negative images like Ebola, Plague, AIDS just to name a few.

There is no question that the last quarter was filled with worries about the US economy following other major economies like Germany & China into a recession. Trade war, the 2020 election and the potential impeachment of President Trump were some key factors as was the apparent resistance of the US Federal Reserve to ease financial conditions.  Look at the chart below of CEO confidence from ChiefExecutive.net as of August 2019: 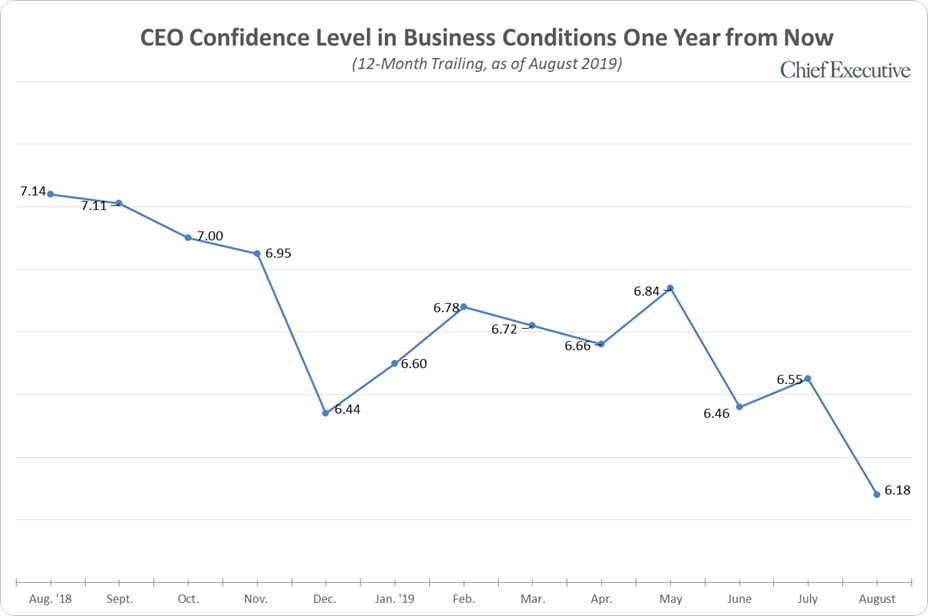 How did we go from such dismal outlook at the end of August 2019 to new all-time highs at the end of October 2019? Remember that the U.S. economy is 70% consumer spending and look at the picture below that explains far more than 1,00 words could: 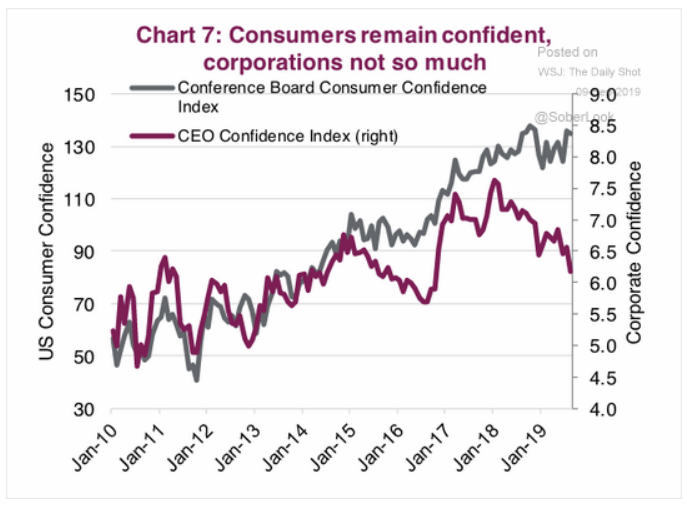 See how the purple line of CEO confidence exploded up from January 2016 into early 2018 based on the Trump Tax Cut & Deregulation initiatives. Then it started slipping because of US-China trade war concerns  & fears about the 2020 election.

Contrast that with the gray line of Consumer Confidence. This line also exploded after the 2016 election but has not wavered to any serious extent. This is the simplest way to understand the Trump Narrative. So as long as the confidence in Trump remains unshaken, the US economy should remain fine.

There was also a big factor underneath that has changed in the past 4-5 weeks from a big negative to a positive. That factor is the ultimate Deep State in America – the US Federal Reserve (“Fed”). While President Trump & his administration is the engine of US Economy, the Fed is the transmission. And as virtually every middle class or lower middle class American knows, a car doesn’t travel fast or well without both the engine & transmission working in unison.

So President Trump has been absolutely correct in saying that the biggest problem for the US economy has not been China but the Fed. Now finally the Fed has come around in the last 4-5 weeks. Witness: 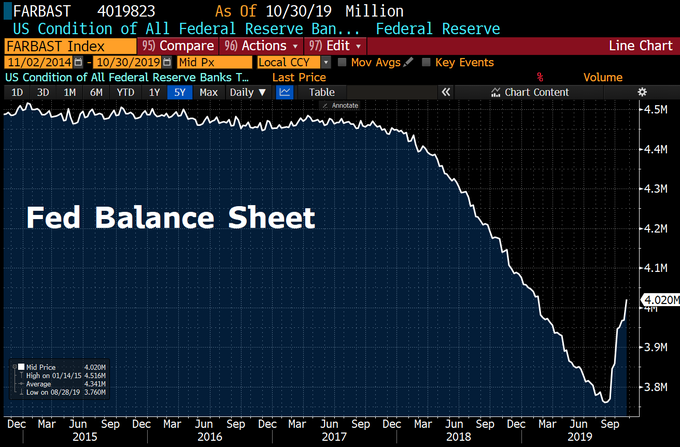 And we saw what happens when the Fed transmission starts working WITH the Trump engine – we get new all-time highs in the stock market & hopefully a very Merry Christmas.

Now imagine that the sham impeachment circus ends or even loses credibility and US-China come to a truce. Then will CEOs be content to remain that far behind the confident US Consumer? We doubt it. After all, even Nobel Laureate Robert Shiller has come around & accepted the Trump Narrative, right?