1. Dissipation of Uncertainty – good or bad for S&P?

The big question now is will the S&P miss the trident of uncertainty? First & the least was the Fed & their posture going forward. Then it was the British election for its potential to cause disruption in markets & the European economy. And last & the un-least was the sword of Trump hanging over the stock markets in the form of new tariffs on December 15.

The first was dissipated on Wednesday by Chairman Powell both by his statement & his presser. Not only did he say no Fed hikes until inflation gets angrily visible & not only did he confirm the his liquidity-adding posture into year-end but he actually hinted about buying Treasury bonds (meaning QE) if necessary.

Then came a beacon of light from President Trump about tariffs on Thursday morning and the S&P exploded up by 27 handles. And the Treasury market gave its total backing by rates exploding up by about 10 bps across the 30-5 year curve.

Finally on Friday came the stunning news of the wipe out of Britain’s left & its semi-nuts leadership. The scale of the victory now raises the happy prospect of a settlement of the Brexit mess. As James Gorman, Chairman & CEO of Morgan Stanley, told CNBC’s Wilfred Frost “... what is good for the U.K., is going to be good for Europe“. It certainly proved so for British & European banks with Barclays up 7%, British pound up over 1% & UK stocks up almost 3%. And EUFN, the European Bank ETF, was up 3.8% on the week.

Getting to China, FXI rallied almost 6% despite the daily protests in Hong Kong & the Chinese A-share ETFs closed up 5%. And EEM, the broader EM etf, blew away the S&P by rallying almost 3% on the week.

But what might be the biggest result of the above uncertainty killing trident? 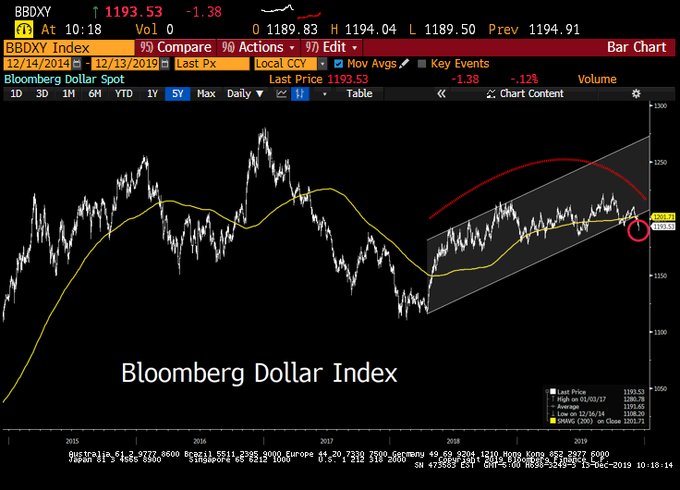 But what about the trendline that had not been broken so far? 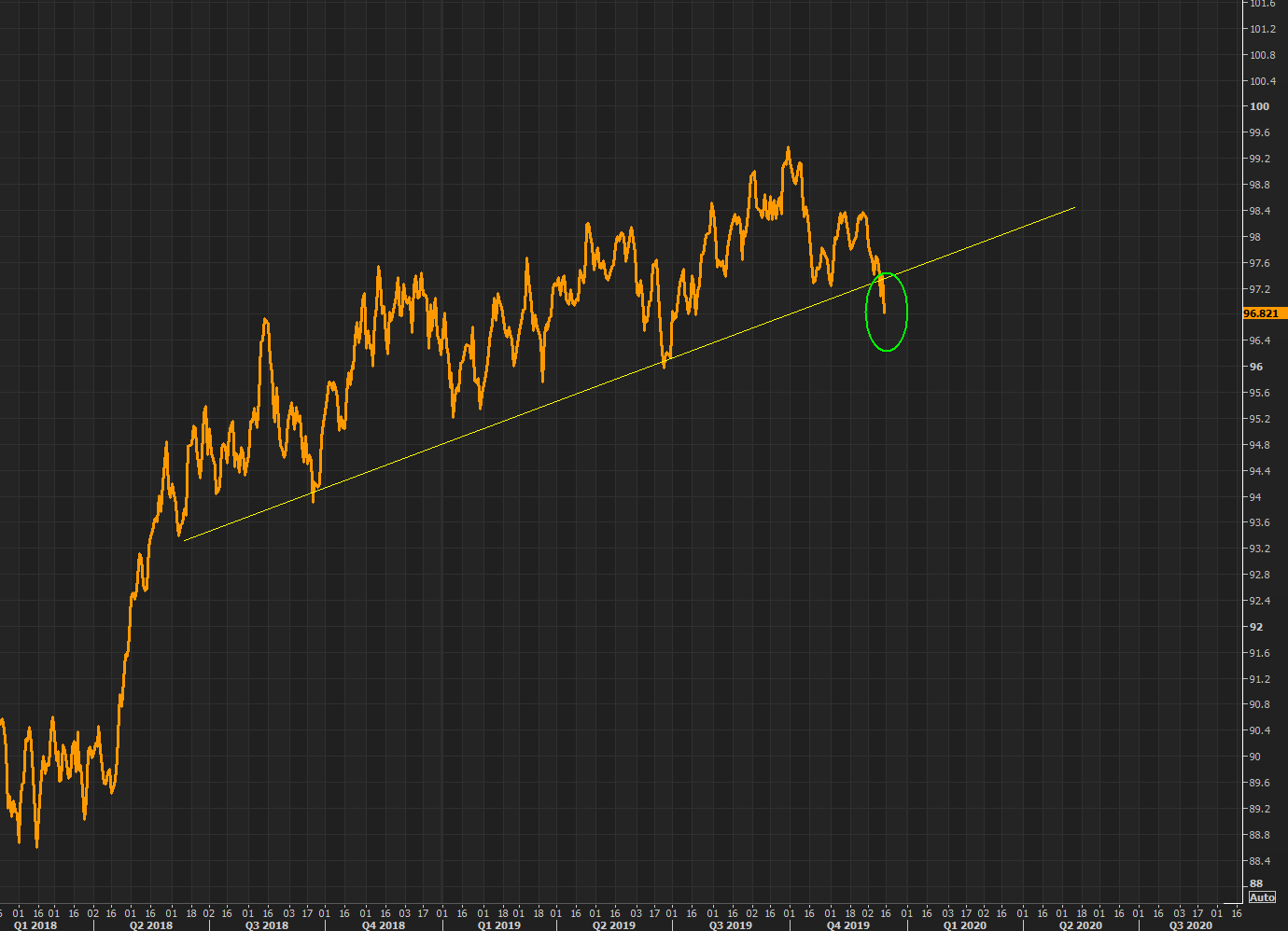 Look back to the past 10 years & ask what major trigger drove the Dollar weaker on a couple of occasions? A two-letter word – QE.

Sure, Dr. Powell tells us what he is doing now is NOT-QE and not QE. But if it talks, walks & act like QE, then can’t we at least pretend it is QE? 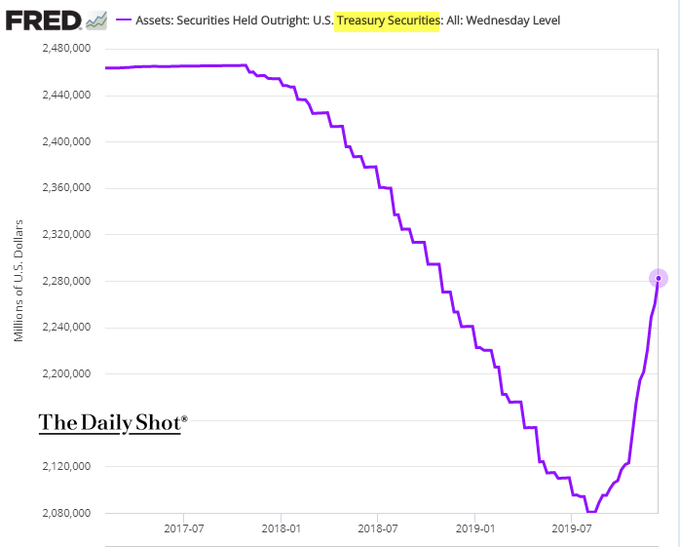 Isn’t the speed of the move more important in markets than the size of the move? It looks as if the normalization of the Fed’s balance sheet was on a down escalator while the re-expansion has been in an express up elevator. So, in the words of Lawrence McMillan of Option Strategist on Friday,

A big question is whether the end of uncertainty will remove obstacles for a rally in Q1 2020 or will it be as a DeMarkian said on Friday:

He added in another tweet that “Dow Jones Industrial Average in wave 5 with new Sequential, and Combo 13.” Mr. Thornton has had a good track record with similar trend-exhaustion calls earlier this year. But, as we recall, that was before the Fed’s launch of Not-QE. Our own experience is that DeMarkian signals don’t work on the downside during QE phases while upside DeMarkian signals work well.

Case in point is Mr. Thornton’s bullish call on OIH we featured last week – “OIH Oil Service has downside Sequential Countdown 13. This is setting up for a long trade.” What a terrific call that was? OIH closed up 5%+ this week.

But what if the negative call on Dow Jones Industrial Average works next week? Our guess is that will just make the Santa Claus rally (post-Christmas into first couple of days in January) even more SantaClausian. And being SantaClausian is much much more fun that being a negative DeMarkian, isn’t it?

Finally is there anything QE actually kills? Volatility. No wonder VIX closed below 13 on Friday.

Removal of uncertainty had the natural effect on Treasury rates on Thursday – the entire 30-5 year Treasury curve exploded in yield by 9.5-10.5 bps on Thursday. And that is in spite of the strong 30-year auction on Thursday. 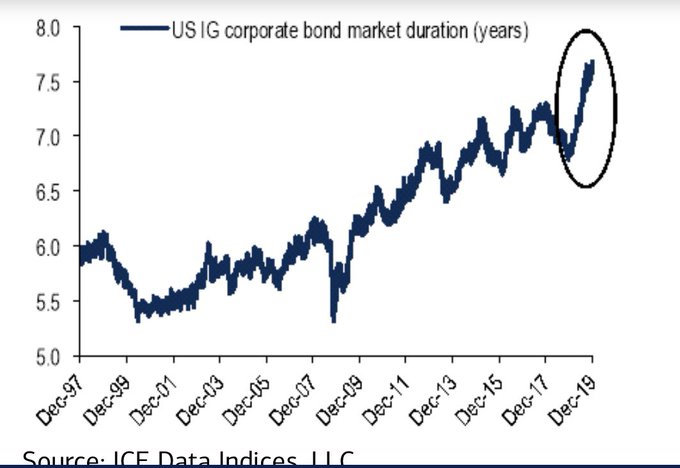 Then a strange thing happened on Friday. Almost 3/4 of Thursday’s explosive rise in Treasury rates was given up on Friday in a 6-8 bps fall in rates across the same 30-5 year curve. As a result, as Rick Santelli pointed out on Friday afternoon, buyers who had bought in this week’s Treasury auctions made money in each of the auctions by Friday’s close.

We also saw a reversal of opinion on Bloomberg Real Yield on Friday afternoon. This past summer Subadra Rajappa of SocGen was not in the rates will keep falling camp. But now she is calling for 1.2% 10-year rate by end of 2020. And,  like Priya Misra of TD securities, she expects the Fed to cut rates 2-3 times in 2020.

Remember Bob Michele, JPMorgan Asset Management CIO & Global Fixed Income Head, who predicted the 10-year Treasury yield would fall to 1% this past summer? Now that the 10-year yield is at around 1.82%, BTV’s Jonathan Ferro asked him about his prediction for the 10-year yield in 2020. Look what Mr. Michele said:

He thinks the Fed will be back into an easing mode in 2020. But what would a 1% 10-year yield mean for risk assets? He said,

But why should the Fed come in & lower rates in 2020? Because underneath the happy stock market, the CEOs are not exhibiting confidence. 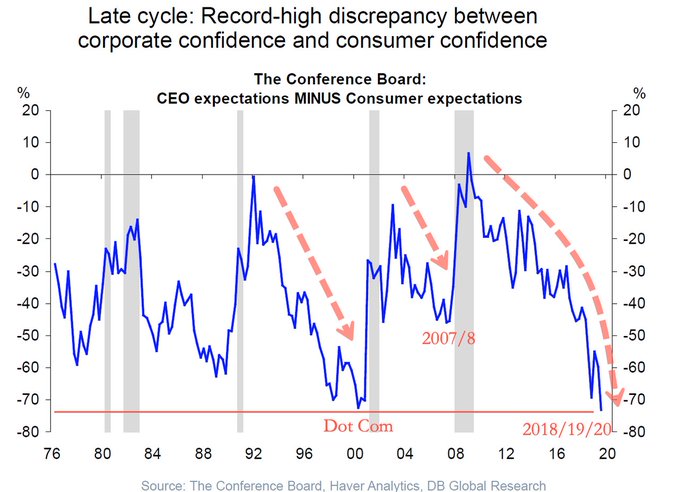 We think the Fed now gets it & they will do everything they can to make sure we don’t have a severe slowdown in 2020, forget a recession.

Don’t forget the real possibility of a cut in payroll tax deduction in the first half of 2020, a cut that might be tailor-made to put more take-home money in pockets of households. This is a cut that the Powell Fed will support because they now understand that onset of deflationary potential is their biggest enemy.

Then you have the “most extraordinary dynamic we have ever seen” to quote Rick Rieder of BlackRock. Look what he quantified on CNBC Half Time on Thursday:

First a top of channel risk? A S&P chart from Market Ear: 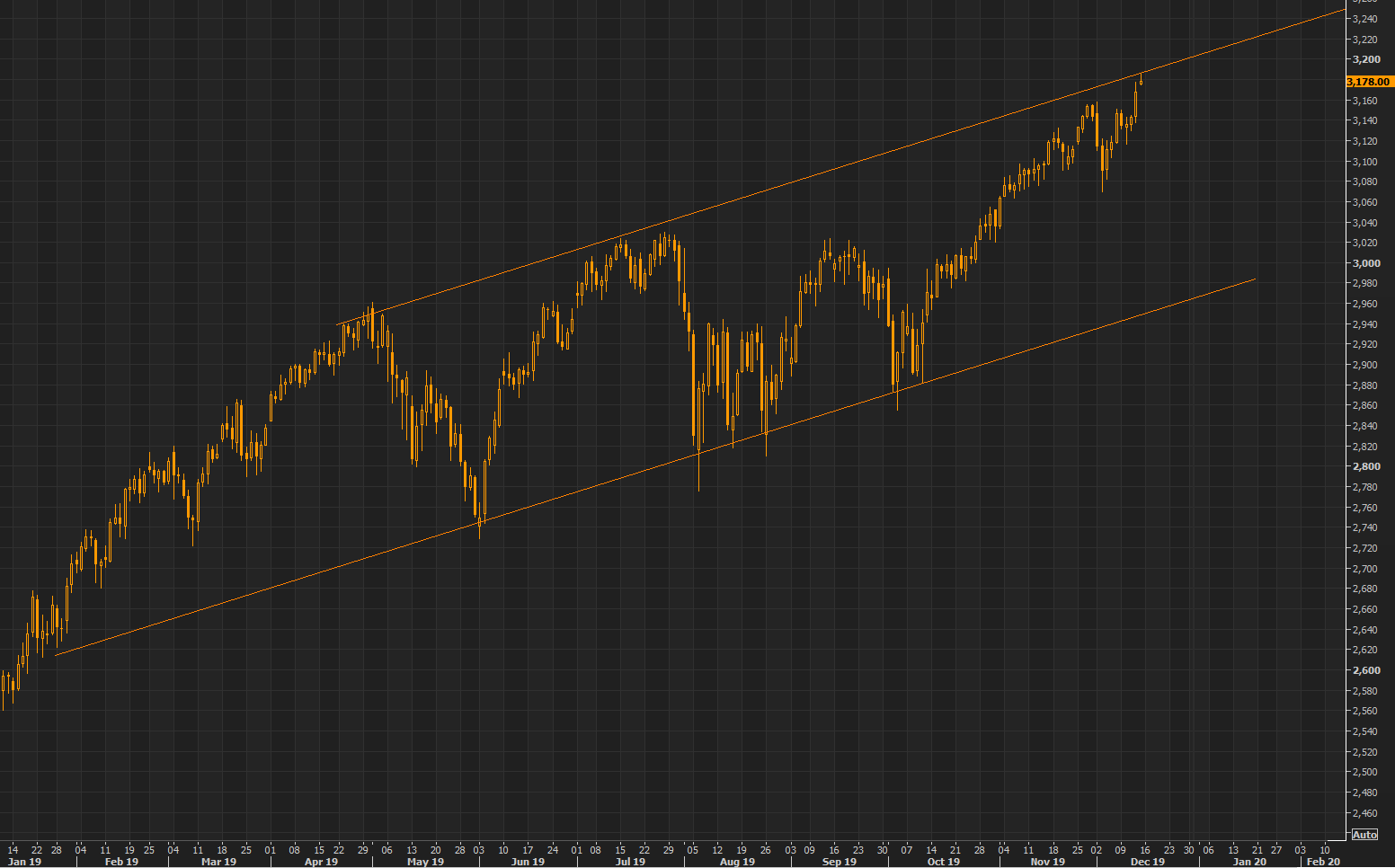 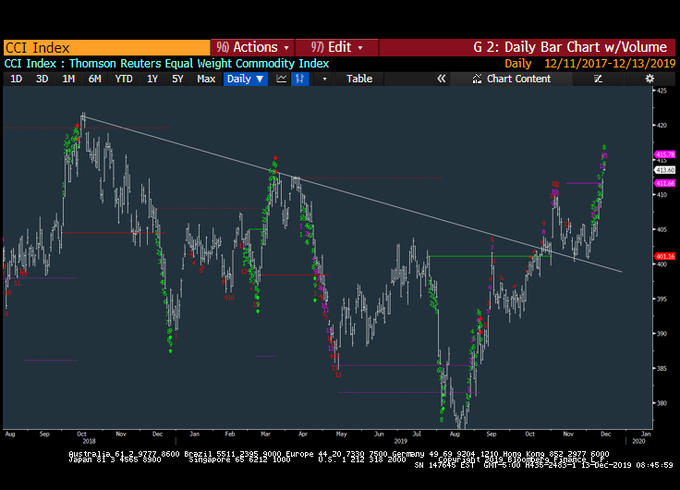 What about Oil, that special commodity? 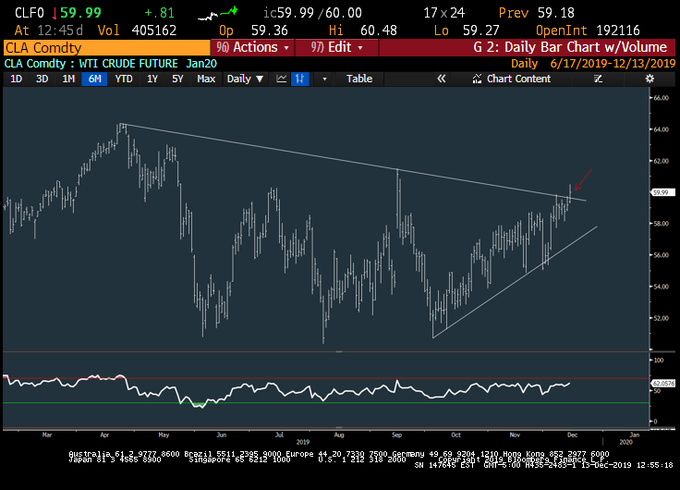 But he expects a fade in Europe: 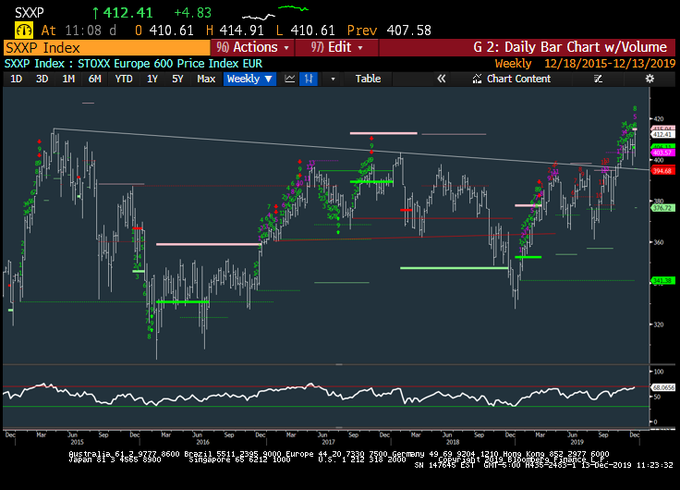 Just to remind ourselves, look what we had written on June 25, 2016 after the first Brexit election:

Just as we have seen with PM Modi of India, the first election that breaks out of mental servility to the global elite is not enough. For true mental independence from global group-think, the society needs a second & bigger election triumph. India & PM Modi got that in 2019 & you see results that you did not see after the first victory in 2014.

On Friday, in the second Brexit election, the English people demolished the hold of their European masters in Brussels & thunderously proclaimed their independence from the European Union. With this great triumph, PM Boris Johnson can now negotiate a smarter & stronger exit from the EU.

But for today allow us to enjoy the consistent & arrogant stupidity of the flag bearer of the global “elite”: 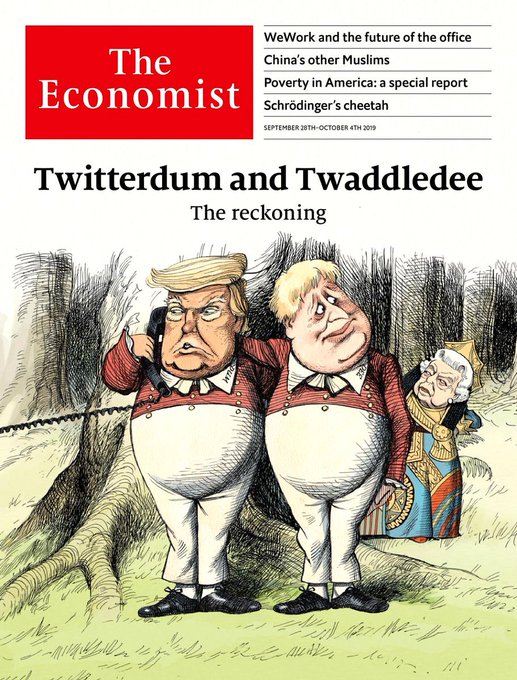 To paraphrase what Ari Fleisher said on Laura Ingraham’s show on Friday:

By the way, Mike Bloomberg imported the previous managing editor of The Economist (who had been wrong about Modi 2014, Brexit 2016, Trump 2016) and made him the managing editor of Bloomberg.com. Does that say anything about how well Candidate Bloomberg understands America? We will find out soon enough.

PS: The actual & well put statement from Mr. Fleischer was – The Press is the biggest institution in America that doesn’t understand America.