1.”huge secret sauce” & “he is doing it exactly right“

Remember the old dictum – don’t let a crisis go to waste. Ex-DoD chief Rumsfeld may have screwed that up but Fed Chairman Powell has done it just right. We go back to what we wrote after the end of October Fed meeting:

What “actual deeds” you ask? 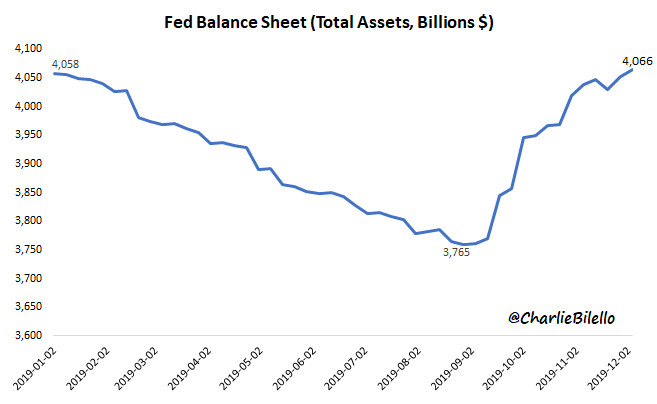 Actually the above understates the liquidity being pumped into markets. Look what Rick Rieder of BlackRock said to BTV’s Jonathan Ferro on Friday morning after the Non-Farm payroll number:

Some might say this is going into the markets and not into the economy. They are forgetting what Chairman Greenspan said a few months ago that economy & markets are now far more dependent on each other. Remember, just like a car, the US economy runs great when the transmission mechanism of the Fed is working together with the engine of the Administration. Since the Repo crisis & more explicitly since the October Fed meeting, the Powell Fed is working together with the Trump Administration. We are now seeing the results.

To non-believers we ask, don’t credit strength & strength in economy go hand in hand, especially under high liquidity conditions?  Remember the panicky shoot up in CCC-debt yields two weeks ago. That was supposed to be a canary in the credit market’s coal mine. But after Friday’s strong 266,000 jobs number, a credit manager said on Bloomberg Real Yield that now the shoot up in CCC yields could be viewed as a buying opportunity.

This, as Rick Rieder said on Friday, is the huge difference between the US economy & the moribund European economy. He was almost poetic in pointing out that Europe doesn’t have ” … the fast rivers of cash flow that are driving the US economy … “.

Remember the big decline in stocks on Tuesday morning after President Trump said he would be fine without a deal with China? Now remember how the stock market closed with a buy program that afternoon. So the S&P had a fast nasty fall that was reversed just as quickly by Friday.

That folks, is how you spell immense liquidity. What about non-believers you ask? 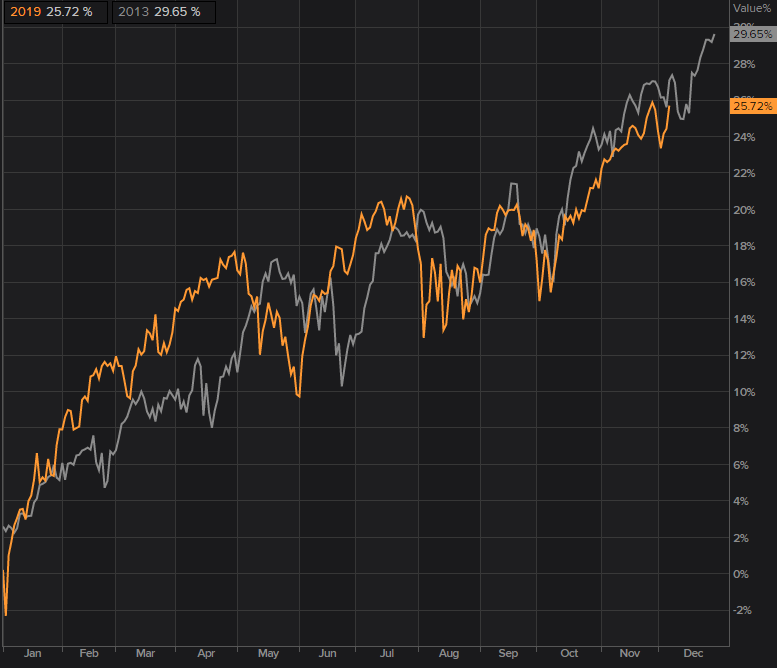 Believers should note however that the above 2013 chart suggests another nasty dip next week. That could come from the Fed on Wednesday, the ECB &/or the British election on Thursday or the Retail sales numbers on Friday. Then, of course, we could get a nasty fall on the following Monday from a negative news on tariffs.

Now if that nasty fall is just as easily made up by a bigger rally in the week after, then you can truly summon your inner Shelly and sing “Hail to thee blight spirit” to the river of liquidity that “from Fed-heaven or near it, pourest her full heart” for us investors.

No, we have not gone nuts. We are simply trying to climb up to the Stephen Moore peak of describing the NFP number “a magical moment for the U.S.” on Friday evening on Fox. But you know what could make so many non-believers go nuts? If the message in the chart below gets realized by December 31: 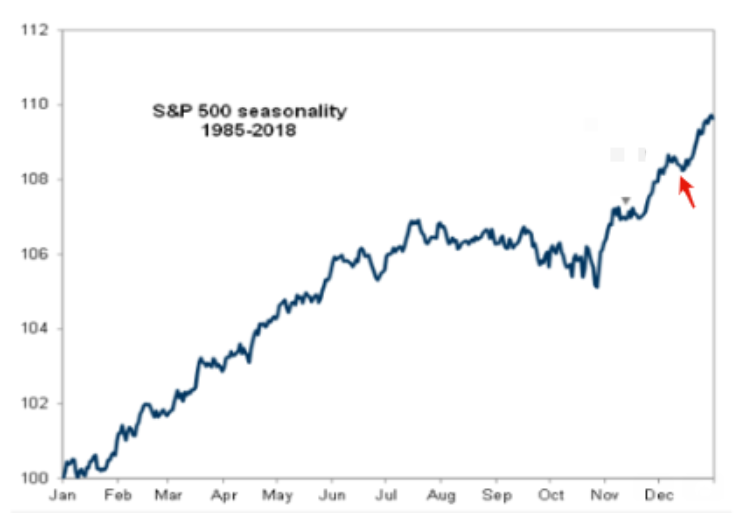 What drives US interest rates?

We all saw this again on Monday when Treasury rates shot up hard in sympathy with German Bund rates. That was mainly due to reports about demand by Merkel’s new coalition partners for increased fiscal spending by Germany. Remember that the fears about new ECB chief Lagarde forcing Germany to increase fiscal spending led to the big move up in German & US rates a couple of months ago. How big a move has it been? From minus 70 bps to minus 28 bps in German 10-year yield.

Rieder said he finds the back-end (i.e. longer maturities) uninteresting except for the balance it provides to a portfolio. Priya Mishra of TD securities made a similar but stronger comment saying “… Treasuries are very cheap as a hedge for risk assets… “.

Our discussion above has been focused on the market’s reaction to the NFP report & not to some of the not so flattering signals some found in the details. One obvious question is why the huge difference between the terribly weak ADP report & the much stronger than expected NFP report. One answer is below:

From Lawrence McMillan of Option Strategist on Friday:

Is there a contrarian catalyst for an up move in stocks? 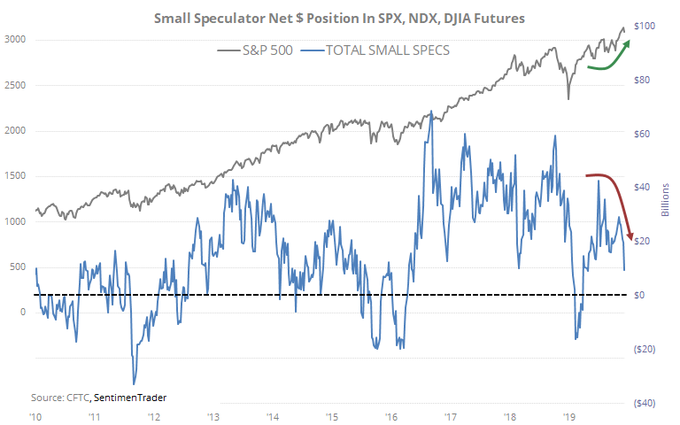 One reason we should not be discouraged by the first week of December: 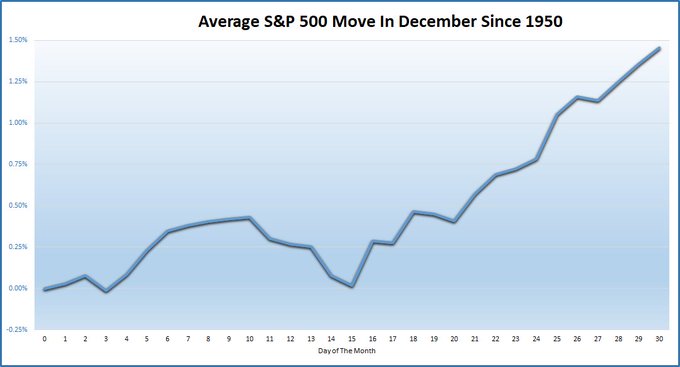 Now for the negatives. Last week Tom DeMark was disappointed about not getting to his full 13 count. This Friday’s rally solved that for a fellow DeMarkian: 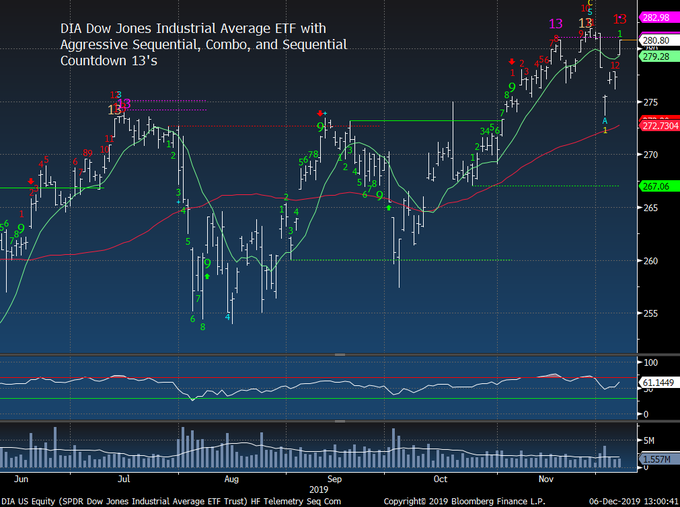 For those who want a short exposure: 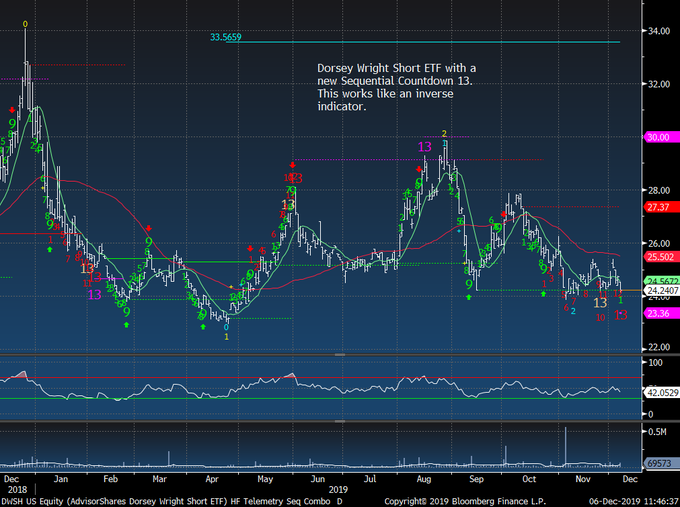 Remember the phenomenal call by the famous Larry Williams to buy stocks just before labor day. This week Jim Cramer featured the call by Larry Williams about the tide turning. Mr. Williams thinks the Bears will have the run of the place into February 2020. So his call is sell the one more bounce he sees ( as of Monday, December 2) & stay out of the way in to February 2020. He think it will be ugly & that animal spirits will turn from bullish to bearish.

First the reality as of now:

And we know why Europe has been so moribund to quote BlackRock’s Rick Rieder. So could some one actually say buy European stuff & that too the center of the swamp – Banks? But before that, what are CDS of European banks doing?

What similarity does Parets see with Consumer Discretionary stocks in 2009?

The second contrarian call comes from a DeMarkian: 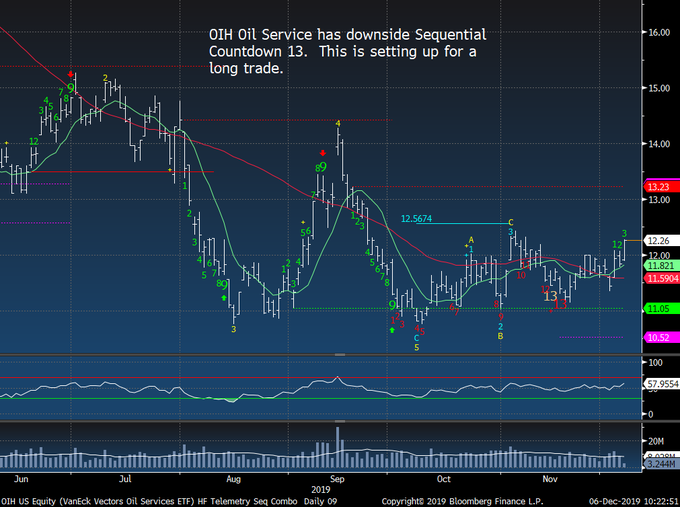