Friday’s action in the markets was clearly driven by the specter of a much larger than expected Coronavirus epidemic in China & the possibility of virus migration to other regions.  Every negative news triggered another down move in the S&P.  We have no clue how far the virus might spread & what damage it might cause.

But we also detected a whiff of panic in Government authorities in US and of course in China. We saw news items about several cities in China being placed in near quarantine status point, about severe panic in Chinese authorities & a consequent drive to take all possible steps. Comments from US CDC & other officials also suggest a heightened level of monitoring & possible quarantine of people arriving from China or other affected regions.

And, as the old dictum goes, investors stop panicking when they see Governments panic. Yes, it has been usually applied to the Fed & global central banks but the parallel does apply to Government authorities in such apparitions of epidemics.

So speaking purely from a markets viewpoint, a crisis like this might well cure the US stock market from its complacency & the resulting decline could well create a buying opportunity as it did in previous epidemics. 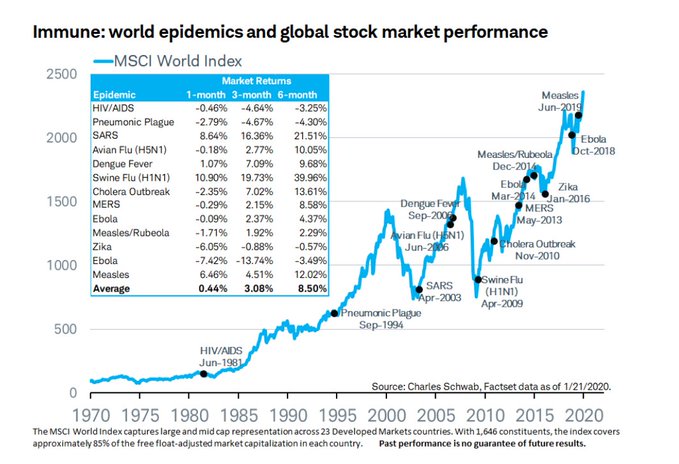 The intermediate term question is about the impact of the virus & the virtual quarantine of tens of millions of Chinese people on the economy in China. And if China slows, don’t Asean countries slow as well?

What does that do to a Fed that might have had some desire to talk hawkish next week? How will Chairman Powell talk about the growth impact of this Coronavirus? 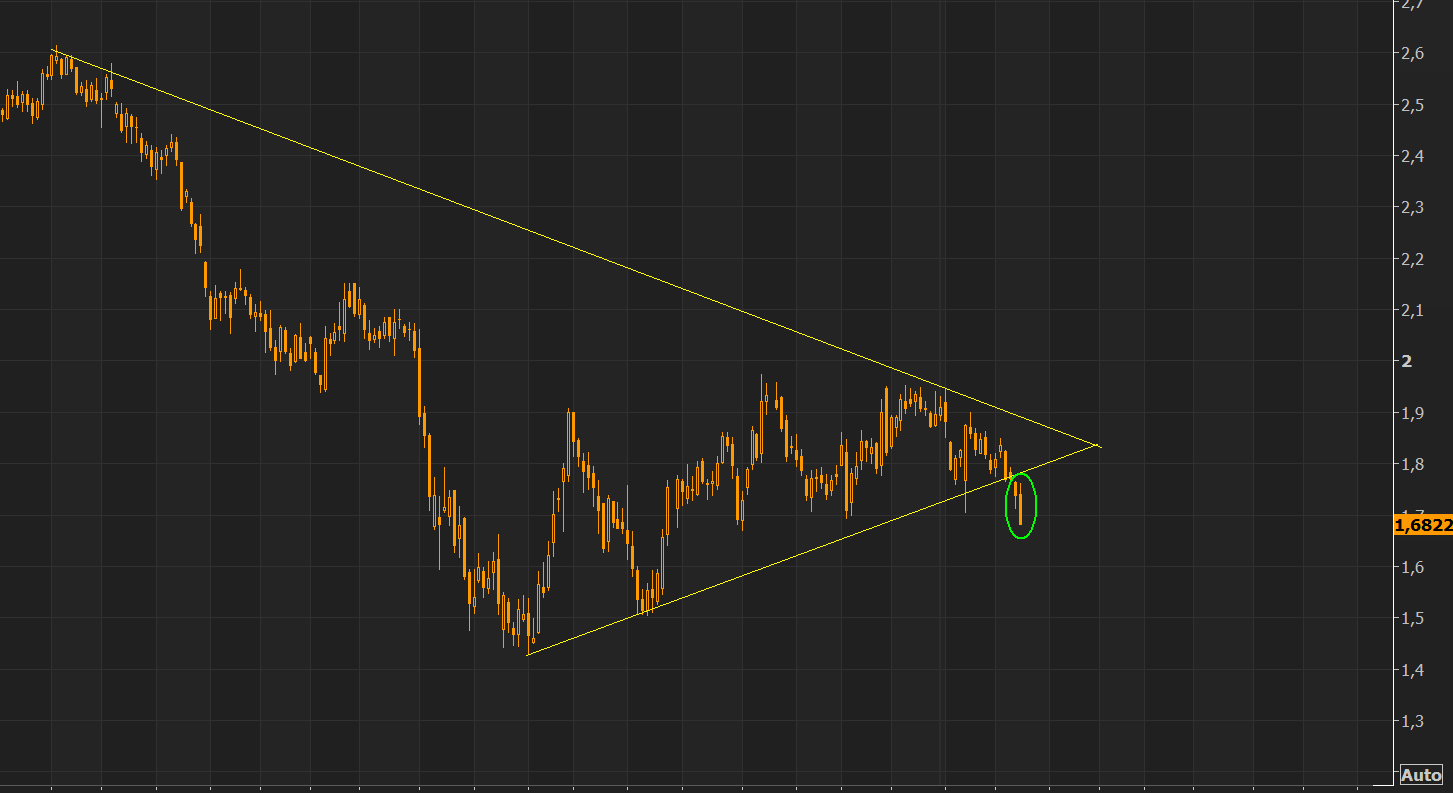 And TLT, the 20-year Treasury ETF, closed up 2.9% on the week beating every other asset class, including GDX, the Gold Miner ETF. 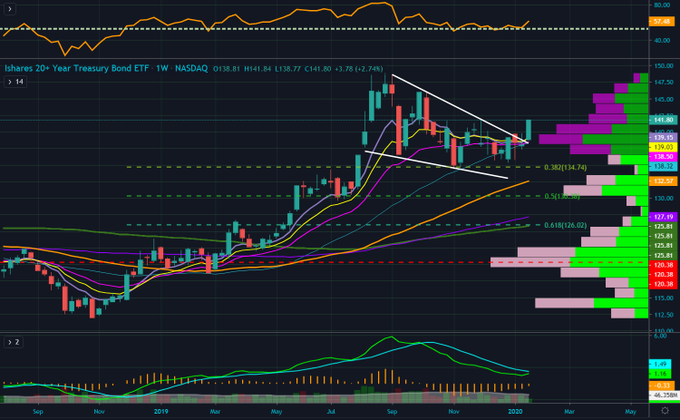 But is this move in interest rates supported by a move in commodities? What about Gundlach’s favorite Copper/Gold ratio indicator? 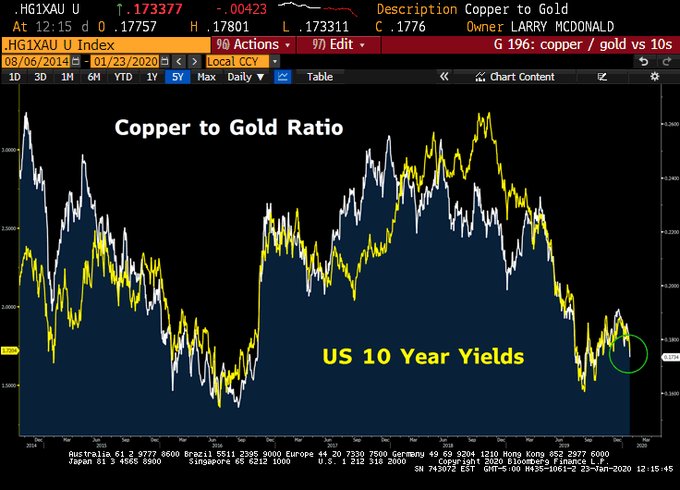 But the above is after the news of Coronovirus. That might prove a short term trigger. Is there any one who is arguing for a sustained move lower in interest rates? How about the RB pair? No, we don’t mean the running back pairs of either San Francisco 49ers or Kansas City Chiefs.

Is there any indication that negative rates elsewhere might be driving money into US Treasuries? 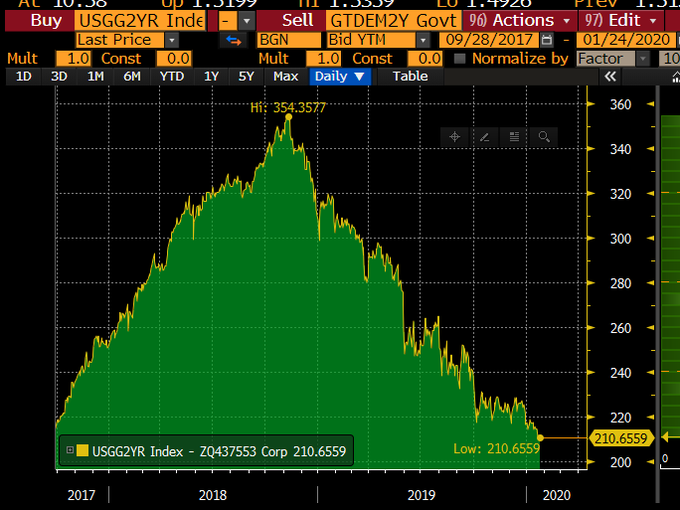 David Rosenberg articulated this view explicitly in his interview with a Swiss entity:

But what about US institutional buyers?

Hmmm! What if the big US buyers, especially the large speculative players & CTAs, start buying seriously? 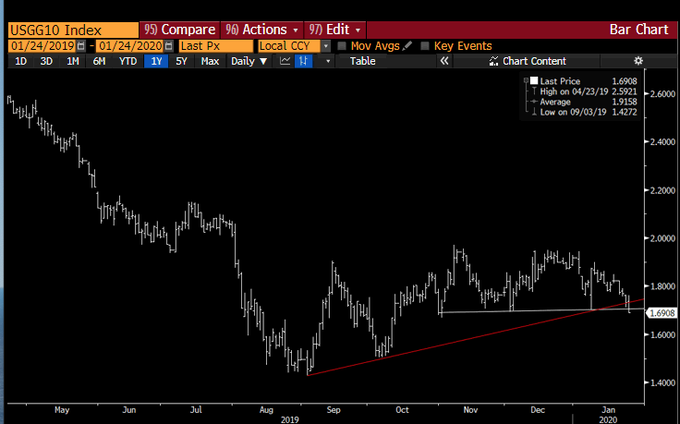 Our friends at CNBC Squawk Box have no doubt forgotten but we do remember the terrific call made by Nomura’s Charlie McElligott on their show on Wednesday, December 18, 2019?

His trade for January was Long Bond proxies & Secular Growth-Defensive & Short Energy & Banks. Kudos to him.

But the picture looks different when you consider high yield bonds or leveraged loans:

And Jeff Gundlach said the BB bond market is as unattractive as he has seen in his career. In fact, he suggested selling BB Corporate Bonds & Buying S&P 500 – the risks are the same in the two but the rewards are very different.

Frankly, what happens on Monday or Tuesday might be driven by news about Coronavirus than anything else. So what if the news remains bad on Monday-Tuesday and the fall in stocks on Friday is followed by declines on Monday & Tuesday? Wouldn’t that bring us to a much better buying level just ahead of the Fed meeting on Wednesday? What if Chairman Powell is forced to respond to the Coronavirus fears with soothing statements?

After all, by Wednesday we might see a peak, at least a local peak, in epidemic fears, a soothing Fed that reiterates their determination to not let the US fall into a slowdown and a far less overbought condition in the stock market. And we would have had a Boeing conference call , a Goldman Sachs analyst day & Facebook, Microsoft earnings on Wednesday after the close. With all this, could the Bulls actually drive the stock market higher on Thursday & Friday?

Of course, we might look back at the above next week and see how silly we were to even imagine a bullish scenario. On the other hand, look what Lawrence McMillan of Option Strategist wrote on Friday afternoon:

Getting back to the first hand, Carter Worth of CNBC Options Action explicitly recommended selling or shorting QQQ.

Much will depend on both how stellar earnings are & what the guidance is. And, of course, on what the Fed says on Wednesday. We should not forget that Tech is divided into two big chunks – China-influenced & China-proof. We saw the nasty reversal in Semiconductors on Friday, possibly on China virus epidemic worries. But the China-proof Alphabet, Netflix were down far less.

But if not tech, then what? 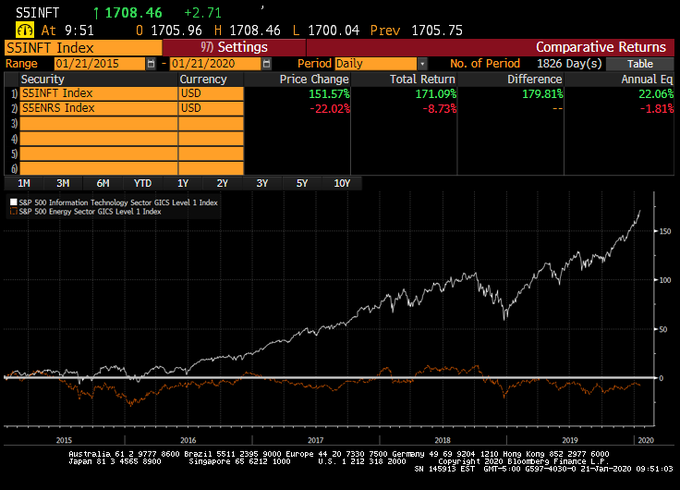 On the other hand, as we recall, the 2000 top in major tech stocks happened in April after Q1 earnings.  And back to the first hand, David Rosenberg agrees with Rich Bernstein based on his comments to the Swiss entity:

But when might we see the peak of this cycle? Isn’t that the big question?

Finally, look at what Gold and Gold miners did this week. And that might be just the beginning if David Rosenberg proves correct:

In other words, buy Treasury bonds now with Bond proxies like Utilities etc. Then sell these in the next recession to buy Gold.  He may actually be right in 2021 after the reelection of President Trump & the drive for a middle class tax cut. We do think the long deflationary cycle in US assets will end in the second term of President Trump just as the 1930s deflationary cycle ended in the last years of President Roosevelt.
But what matters right now is next week’s FOMC and what Chairman Powell says about mid-2020.