About two weeks ago, a Muslim mob rioted against a Holy Shrine of Sikhs in NaPakistan. The mob surrounded the Gurudwaara & threatened to destroy it and replace it with a mosque. Why? Reportedly,

Unlike many such acts inside NaPakistan, this one did not go unnoticed. The Chief Minister of India’s Panjab state appealed to Imran Khan, Prime Minister of NaPakistan to control the mob & protect the holy Sikh shrine. 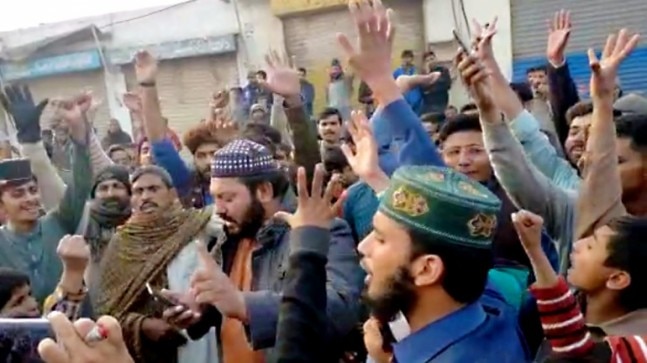 Utter silence from US Media

Did any one hear about it from any US media outfit? Did either Sue Herera of CNBC or Sue Keenan of Bloomberg TV report it in their news bites?? We don’t think so. Guess it doesn’t matter to US media when a young girl of an Asian Religion gets kidnapped, perhaps raped, then forcibly converted to be finally married off to her rapist.

The two above-mentioned Sues are responsible to bring regular updates of news bites to CNBC-Bloomberg audiences. Sadly, these two women journalists did not find the case of the above Sikh girl relevant or important to devote a news bit to the story even though it pitted “two nuclear-armed rivals, NaPakistan & India” in a dispute.

Ask yourselves how quick & responsive would CNBC & Bloomberg TV have been had the religions been reversed in the above story, meaning a young Muslim girl had been subjected to the same treatment by men from an Asian religion, whether it be Sikhism, Buddhism, Jainism or Sindhu (Indian) Dharma. You don’t need to ask yourselves, almost all of you know the answer.

The above disgusting & sad tale keeps happening in NaPakistan & Bangla Desh. In fact, there has been a massive religious cleansing of people of Asian Religions from both NaPakistan & BanglaDesh over the past 70 years. Back in 1947, both regions had large minorities of Sindhav Indians, Sikhs, Buddhists which by now have been virtually eradicated by forced conversions, killings or economic wipeouts.

Back in the 20th century, NaPakistan was a “critical ally in the war on terror” and virtually a client state of America. But that is no longer the case. So why is the US media still so horribly & obviously bigoted against Asian Religions & especially Indian Dharma? Just a couple of weeks ago, CNBC’s David Faber discussed “discrimination” against Muslims in Modi’s India with the financial analyst Jim O’Neill who was a fervent admirer of India ruled by Italian immigrant Sonia (formerly Antonio Maino). Frankly, that was as sick a conversation as we have seen recently.

2. Total Distortion in & by US media

Has David Faber ever discussed on CNBC air the case of Arab Muslims denied equal rights in Israel or even the territories occupied by Israel? Has CNBC, David Faber or ever-verbose Jim Cramer ever blamed Israel for ONLY allowing a right to return to Jews & not to Muslims even though Israeli territory has been a homeland for Muslims for the past 800 years or so?

David Faber wouldn’t dare do so & CNBC would never permit him to do so even if he wanted to. His entire base of contacts & sources is probably overwhelmingly supportive of Israel & firmly committed to right to return of Jews & only Jews to their historical Jewish homeland.

Yet David Faber, CNBC & the entire US media scream in horror when Indian refugees from the Indian subcontinent are given Indian citizenship via a right to return policy. By the way, this right to seek Indian citizenship is also available to Buddhists, Christians, Indians, Jains & Sikhs of Indian origin.  But naturally it is not available to Muslims who voluntarily broke away from India or left India in 1947 to create separate & designated Muslim homelands in today’s NaPakistan or BanglaDesh, homelands that allow virtually no rights to people of other religions.

Think about it. The Muslims of these regimes who cleansed out native citizens of non-Muslim religions should now have the unconstrained right to return to India which they broke away from by their own choice of religious extremism? If that makes sense, then we should enable all Muslims in Palestine, Jordan, Syria & Lebanon the right to move to Israel & claim Israeli citizenship. Heck, why not allow unrepentant German Nazis to move to Israel & claim Israeli citizenship?

It is important to state that Muslims who are citizens of India & Muslims who never left India to the breakaway Muslim homelands of NaPakistan & BanglaDesh are equal citizens of India with absolutely equal rights. There is no change to India’s multi-religious legal & emotive framework. Unlike Israel, India is a religion-independent state. But like Israel, India is the only state to which Indians, people of India-origin religions (including Christians of Indian origin) now have a right to return. That is a return to Indian ethos.

What are the chances of David Faber, CNBC, Bloomberg TV or any US media outfit ever making the above case? Zero we think. So why do these media persons or entities feel so safe & free to express their own religious bigotry under the guise of journalistic questions about India?

The answer is simple – Indians have been pathetically weak & prone to take garbage instead of hitting back. But that is now changing.

Look what happened during this week’s trip to India by Jeff Bezos of Amazon. Besides the anger against Amazon’s pricing practices, Bezos was criticized for the virulently anti-India coverage of Bezos-owned Washington Post.

How revolutionary was that? Especially for the Indian Foreign policy establishment that has been and remains Brit-dominated. Huge, we think. So what is going on? The Indian establishment is now listening to the Indian people who are waking up.

Remember our Thanksgiving article about a magnificent & seminal breakout from usually Iranian-Muslim dominated Bollywood? The film Tanhaji was released on January 10. We are literally stunned at the outpouring of pride, love & admiration for the film all across India. Indian viewers, who traditionally have preferred romantic films, embraced Tanhaji as we have never seen before.

Yes, the film is absolutely magnificent in the story-telling, performances, visual effects. It is probably the best war film we have ever seen. It puts to shame films like Troy, 300 & even classics like Battle of the Bulge, Mosada just to name a few.

And it is a true story that we have heard since our childhood. We have seen other attempts to film it. We have also visited the fortress where the battle took place on February 4, 1670 against the chosen might of the Timurid-Uzbeki-Mongol army. The tale of Tanhaji Malusare, the commander who led the attack, is still told in the nearby villages. His memorial still stands in that fortress. But the rest of India did not know about the attack or the story. 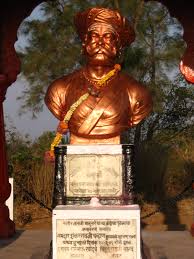 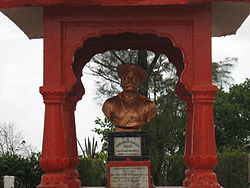 (Memorial to Subhedar Tanhaji Malusare at the SimhaGad fortress)

Now, thanks to a magnificent film, all of India knows. And Indians are simply thrilled to see it told in such an intensely passionate & breathtaking manner. Not only is Tanhaji’s role played to emotional perfection by Bollywood’s Ajay Devgn but so is the opposing role of the incredibly brave & capable Mughal commander by Saif Ali Khan, an Indian Muslim of Afghani Pushtun origin. 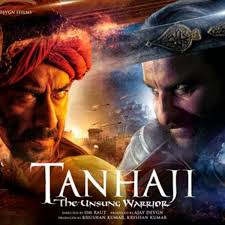 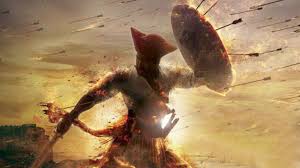 If you watch the public’s reactions on You Tube, you will hear kudos for the honest & explicit story telling that is devoid of any false political correctness. Tanhaji says to the villagers at the base of the mountain fortress – “aren’t you sick of keeping your wives & sisters indoors in fear of Muslim soldiers kidnapping them? Aren’t you sick of being unable to pray to God in public? How long will you live in such servitude to foreign invaders”? These words were repeated by the viewers in the You Tube clips we saw.

Let us be clear. This film could NOT have been made 10 years ago and people would not have received it with such deep passion 10 years ago. Even Ajay Devgn & Om Raut would not have thought about making this film 10 years ago. That shows how much India has changed in the past 10 years. And this change is just beginning. As India becomes more prosperous & strong, India will become more & more Indian and proudly so. That is the meaning of the success of this magnificent film Tanhaji.

Now CNBC, Bloomberg, US Media & David Faber/Sue Herera/Sue Keenan should re-read the question posed by Tanhaji in 1670 to villagers about safety of their wives/sisters and then read the coverage of what happened to that young Sikh girl in today’s NaPakistan. Then perhaps they will understand that what used to happen in Uzbeki-Muslim dominated India in 1670 is still happening today to women of India-origin religions in Muslim-dominated breakaway Muslim regime called Pakistan.

And what if these “journalists” don’t? Then you know their religious bigotry against Indian Dharma has gone irrevocably deep. And within 10 years, we will see Indian on-air talent of CNBC, Bloomberg et al leave their jobs publicly just like US on-air talent of Russian TV left their jobs a few years ago.

Editor’s PS: In the tradition of this Blog, we invite CNBC, Bloomberg, David Faber, Sue Herera, Sue Keenan & Jim Cramer to tell us where we might be wrong or unfair in our opinions above. We will print their responses verbatim. We bear them no personal ill will & our attempt is to hold a mirror in front of them to let them see the effects of their on-air words.