Two weeks ago we wrote in our article The Multi-Pronged Launch,

The announcement of that plan came on Friday, March 13 in the Rose Garden of the White House. To us,it was the declaration of War against the CoronaVirus. It was clear that this is going to be a full American War with all resources of USA working together in a coordinated force. That is why we used the phrase “the power of America is unleashed“.

Two weeks ago, we used the analogy of American resolve & power after the sneak attack on Pearl Harbor by Imperial Japan. Yes, that did result in Japanese supremacy in the Pacific Ocean near Japan for some period. We all know what happened after that. The entire American machine got going, not just the military but the entire manufacturing & scientific sectors of America. Imperial Japan had no answer and their forces kept receding & backing off towards Japan. Finally came Japan’s unconditional surrender.

Two weeks ago, we all saw the US Healthcare & Retail sector join fully in the war against Corona. Dominant nationwide supermarket chains with large parking lots like Walmart & Target, Healthcare retailers & Pharmacies like Walgreens & CVS, lab testing companies like Qwest & LabCorp all pledged their resources to this war. The US Pharmaceutical & Biotech sector is working on multiple fronts to develop treatments & vaccines. That launch was two weeks ago.

This week we saw the US Federal Reserve (Fed) get fully mobilized in this war. On Monday, the Fed made the announcement that will go down in history as its greatest & most ambitious. Besides their decision to buy Treasury & Mortgage securities in essentially unlimited amounts the Fed announced extensive new measures, per Bianco Research:

Remember what the Fed did in 2008 AFTER the Lehman Bankruptcy. That was so small compared to what the Fed has begun to do now. And the yugee difference? That Fed acted AFTER the crisis erupted with the Lehman bankruptcy in September 2008. This Fed, under Chairman Powell, is acting BEFORE the crisis strikes and they have already done more than the 2008 Fed did during the entire crisis.

This is what happens when the Fed begins working hand-in-hand with the US Treasury in a coordinated & full steam ahead manner. Lest any American or anyone in the world not understand the Fed’s resolve, Fed Chairman Powell went on national TV to speak to the American people & assure them that the Fed is ready to do everything monetary with the Treasury to protect US markets & economy. Watch what he said:

But what the Fed did is one side of the US Financial force. The US Congress put aside their partisanship & narrow interests to create & sign a $2 trillion CoronaVirus Relief Bill that will deliver monies to workers, small businesses & large businesses to protect them from stoppage of business because of CoronaVirus. In addition, each family of four, under a specified income level, will receive direct payment of $3,400 from the Federal Government. Watch & listen to President Trump explaining what is in this largest ever financial package in history.

This bill was passed in a 96-0 vote by the US Senate & the US House voted overwhelmingly for it. It shows that America is acting as one and that what President Trump is doing is not just right but is also supported by the American majority.

Did you listen to the $6.2 trillion figure mentioned by President Trump in the clip above? Wasn’t this merely a $2 trillion dollar Relief bill? Yes & no. The lending facility in this bill & other elements could well raise the size of the CoronaVirus relief to over $6 trillion. This is beginning to disturb some prominent bond investors:

We respect Mr. Gundlach a lot. But, honestly, he is being a piker here. The reality is this multi-trillion Relief bill is precisely that – a relief from the damages of CoronaVirus to tide individuals, small businesses through a really tough period. Hopefully this Relief bill will be sufficient to do that. But it will NOT do much to stimulate the US economy.

Yes, we will see a wave of restructurings & bankruptcies after the CoronaVirus is defeated & put away. And fortunately we have a Treasury Secretary in Steven Mnuchin who is an expert in such restructuring having honed his skills after the 2008 recession. That won’t suffice either.

What we need later this year or early next year is a big program to fix, renovate & build America’s ageing &, in some cases, decrepit infrastructure. Without that the US economy will remain mired in a low growth deflationary environment with the rest of the world. Fortunately America will be awash with money &, given the perilous state of the global economy, the world’s capital will be rushing for the safety of the US Treasury market.

Wouldn’t it be the perfect time to launch a large targeted infrastructure program to revitalize American cities, upgrade America’s ageing infrastructure with today’s abysmally low interest rates? In fact, Speaker Nancy Pelosi has already received a nod in this direction from Fed Chairman Powell, as she said in her public comments.

But what would it do to America’s Debt to GDP Ratio? Gundlach’s 30% debt to gdp ratio would look like a piker, right? Before fiscal hawks prepare to cut their wrists, we urge all to remember what happened after World War II. Any one can see that the war against CoronaVirus is truly a world war. Every country on earth is engaged in this deadly war, even China which claimed total success 2 weeks ago only to again ban foreigners from entering China.

Our point is that the world has been mired in a multi-decade disinflationary cycle (with deflationary periods in between) since 2000. We think the global recession forced on the world by CoronaVirus requires a long & massive stimulative labor-oriented infrastructure program to migrate to a period of economic growth.

Given the entrenched theocracy of fiscal probity, that would take a popular President who emerges victorious from the war against CoronaVirus. We know President Trump wants to launch an infrastructure program. But is he popular enough? The “trend” is encouraging: 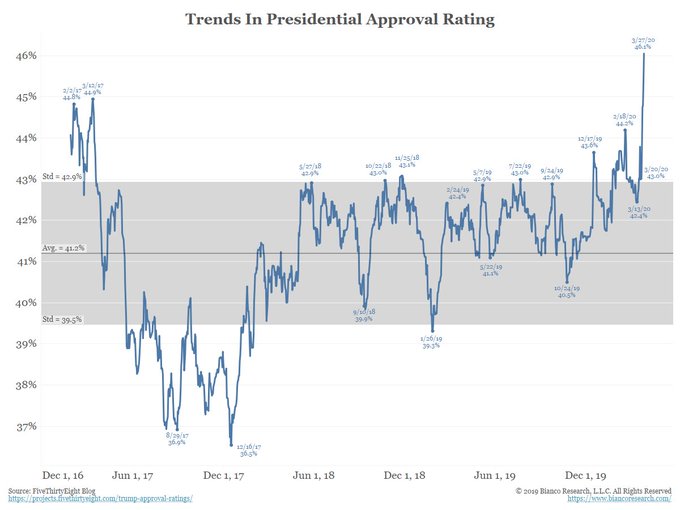