Last week we, perhaps in a flight of fancy, compared where we are today to the 1942 battle of Midway which transformed the US strategy to offensive from its defensive posture since Pearl Harbor. The parallels are not exact, but they never are. Our conviction is that we homo sapiens have not changed since the creation of our species. So we can benefit from looking at how others managed their own conflicts in their own era. After all, what did General Patton say after defeating German forces in his first tank battle in Africa – “Rommel, you magnificent bastard, I read your book!“?

We are now seeing the American people standing up in virtually all parts of America & demanding this destructive shut down be reversed. The capital markets version of that was Barry Sternlicht lighting it up on CNBC Squawk Box on Tuesday. His message – “The Government can’t carry a $23 trillion economy” & his warning – “If you don’t open …. , the damage will be irrecoverable…“

Is the stock market, at least the sector that is benefiting from the stay-at-home mandates, sending a similar message? 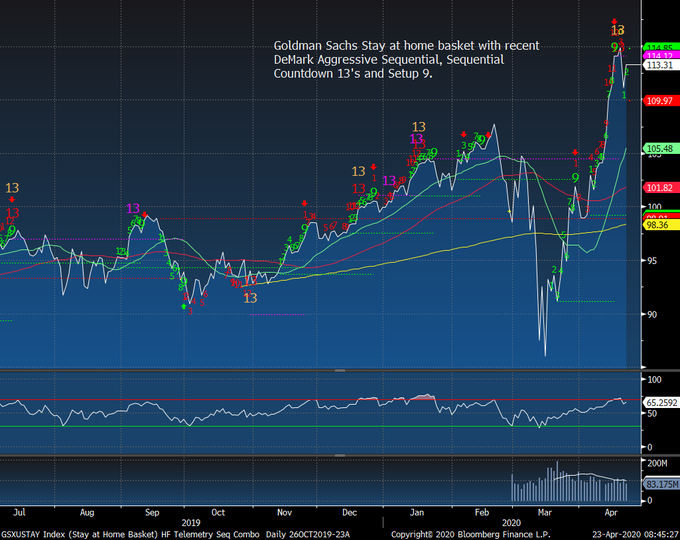 Sternlicht actually said that, at least in his business, rents are being paid in almost all sectors except the We-Work, Regus type shared office space providers. In direct contrast, Kevin O’Leary, an investor in over 50 small companies, said this shutdown is at the expense of landlords (does this Sternlicht & O”Leary difference partly explain why the S&P is beating the Russell 2000 so handily?).

He points out that no business would have even thought about doing so without the shutdown & the destruction created by the CoronaVirus. Hmmm! We heard this & thought of a parallel we all know.

Remember how outsourcing, both in manufacturing & in tech services, was almost unheard of in the 1990s. US Corporations liked the idea in theory but no one wanted to risk it. And there was no reason to change their business model so drastically. Things were fine as they were. Then came the brutal squeeze on profit margins in 2002. Stocks of big companies (GE, MSFT …) went into a nasty bear market from October 2000 into end of 2002.

Is that type of secular change ahead of us in America, especially in the corporate sector? Look what Larry Fink of BlackRock said:

As we recall, he specifically mentioned that his companies have been buying from Microsoft.  And every family we know has increased its purchases from Amazon. Speaking personally, we may not want to step into a grocery store after receiving home deliveries of food, even frozen delicacies, from Amazon, Farm Fresh et al.

Does that mean the Demarkian warnings about exhaustion are merely tactical & short term in nature? 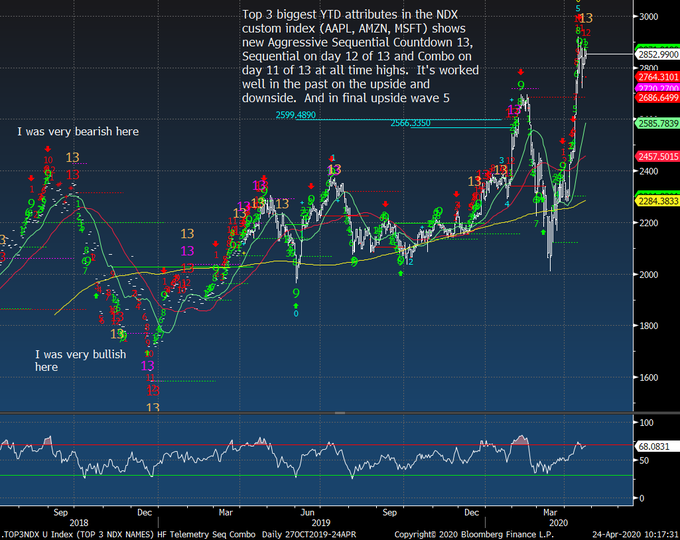 The key word in the tweet above could be “again”. Remember the warning last Friday about trend exhaustion after that day’s rally. That led to two brutal days on Monday & Tuesday to be followed by a move up. The Nasdaq 100 only closed down 51 bps on the week. But next week could be different with earnings & outlooks from Apple, Amazon, & Microsoft.

Finally, the most interesting comment of the week came from Kevin O”Leary who coined a new trading index to watch for stock market direction:

We can confirm that many we know in Mumbai watch Cuomo’s press conference daily & comment on it to us on WhatsApp.

All the above is fine, but is there a upturn in the economic cycle ahead & perhaps closer than what most think?

2. Flip to upside virtuous cycle? An Upgrade of S&P

Remember what Lakshman Achuthan of ECRI said back on April 6?

This week, Achuthan elaborated on this “cycle” view using a 3-D model of a recession:

As he says, “this recession is extraordinarily deep. Already, 26.5 million people have filed for jobless claims, compared with a total of 8.7 million jobs lost during the Great Recession. And it’s not over“. In terms of diffusion, this recession is certainly severe, affecting a wide range of industries.

Now look at the size of duration between the two recessions in the above picture. Achuthan says that “on the third “D,” duration, this recession could be among the shortest on record“. Why?

If Achuthan proves right, then would you not get more bullish on the S&P 500? Well, Ed Clissold of Ned Davis Research did this past week: 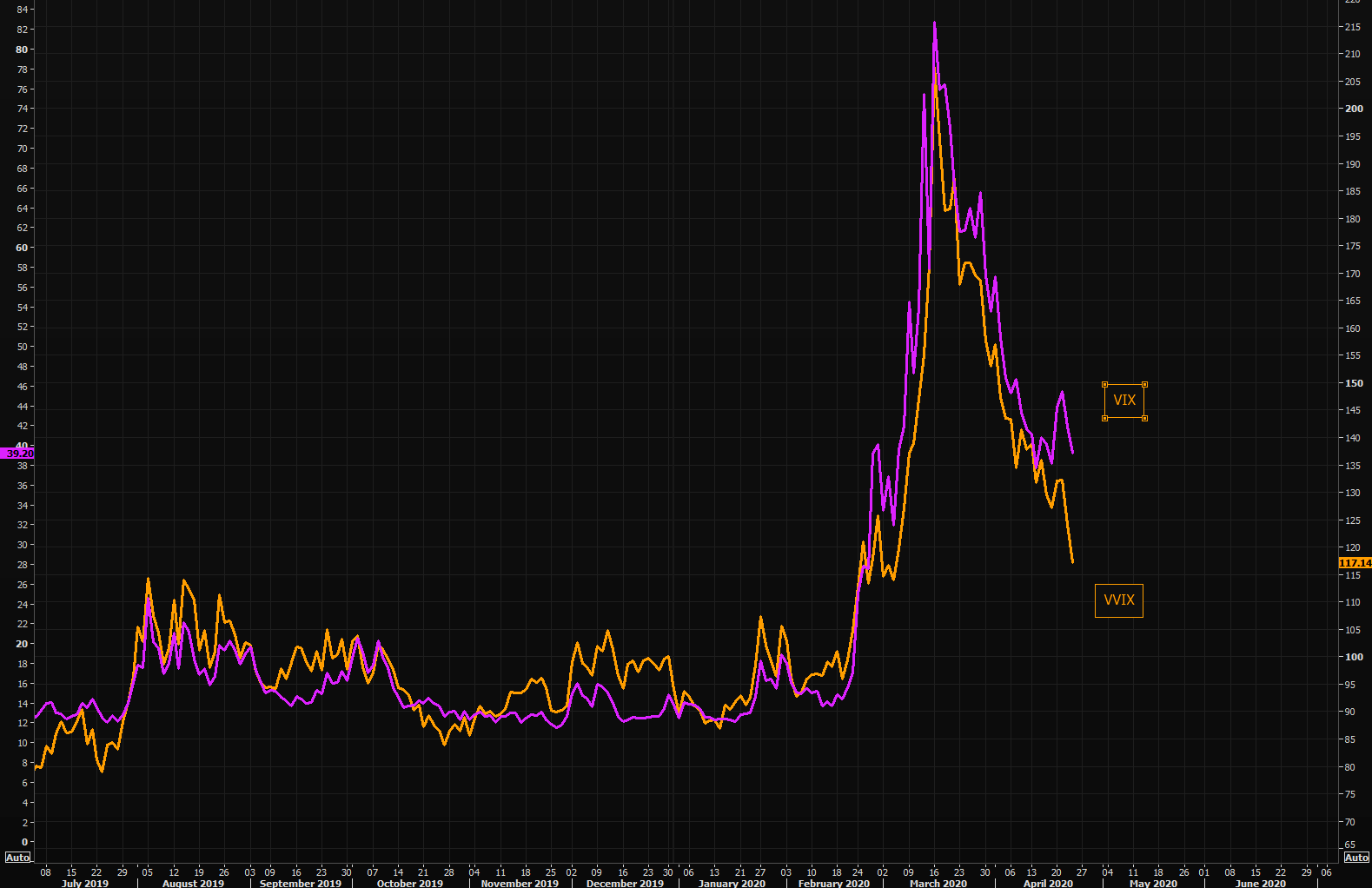 Is this fall in VIX saying there are too few bears around? Not according to AAII via Market Ear: 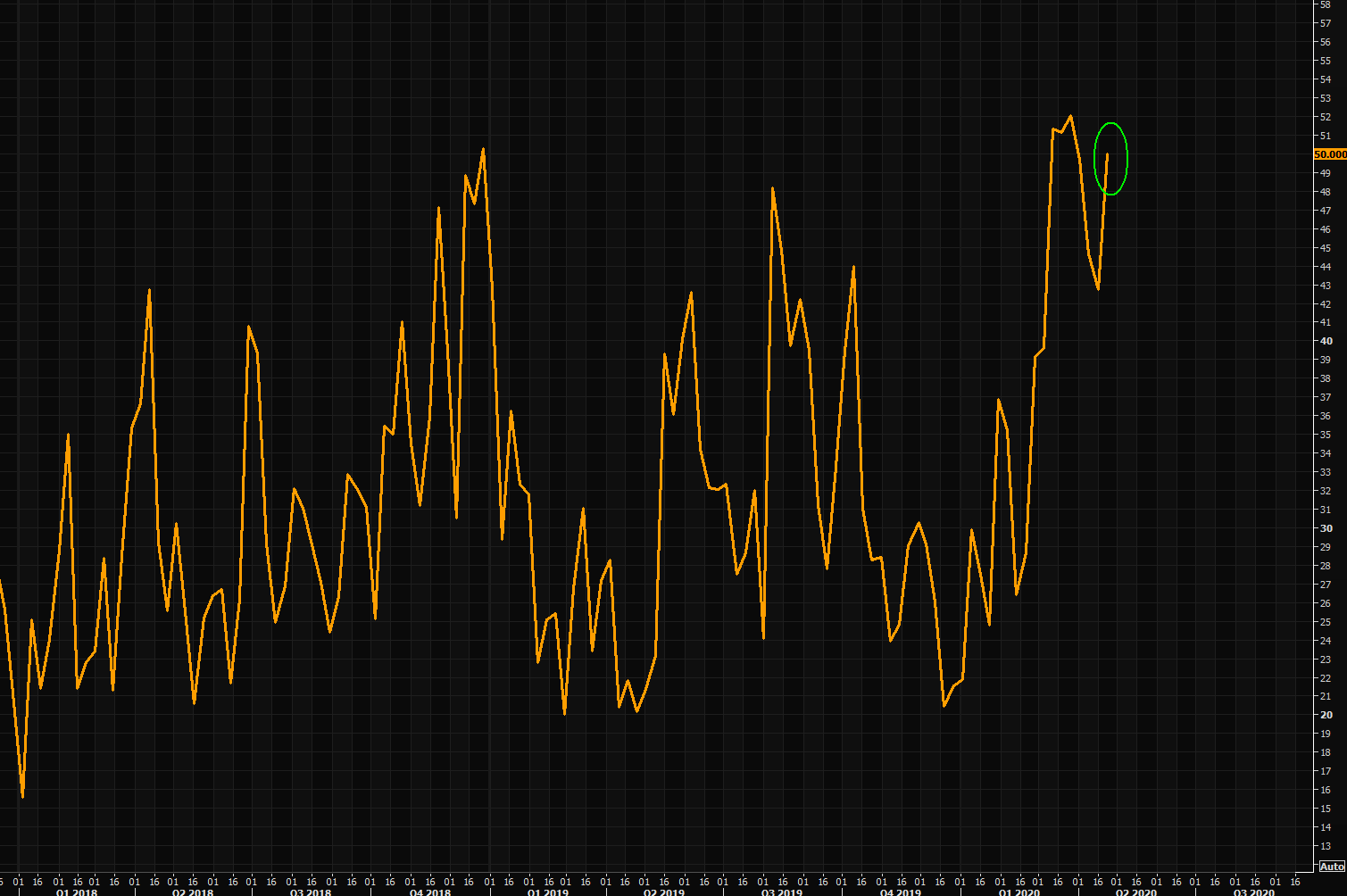 Then you have month-end coming up. After that brutal March, wouldn’t big long money like to show a big positive April especially after a down for Dow (minus 1.9%) & the S&P (minus 1.3%)?

And, according to BAML Research, “Cash mountain: $4.7tn currently in Money Market Funds“.

In the past, when you thought stocks were expensive, you looked at Bonds. But, 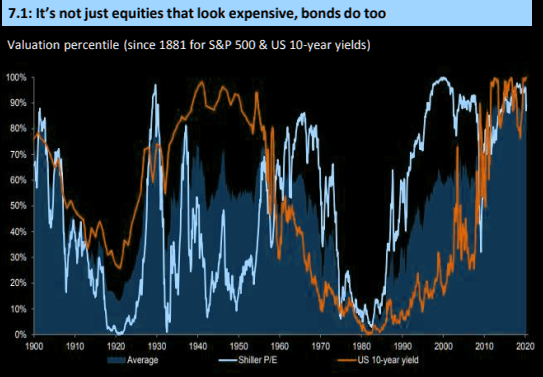 And while Dow & S&P 500 went down last week, TLT, the Treasury ETF, rallied 1.4%. Rates fell along the entire Treasury curve flattening it in the process;

Not just the levels, but the relentless appetite: 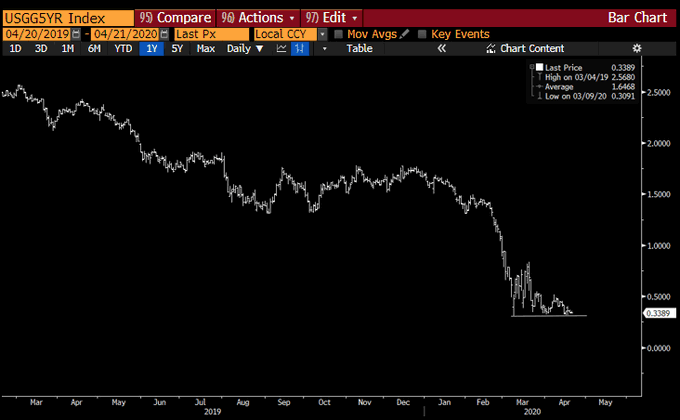 But some luminaries think this is “madness”, to use a favorite descriptor at CNBC Fast Money:

Perhaps, he might want to speak with his old firm’s credit group. Because, per FT,

Of course, Goldman is not the only US bank “pulling back from lending to European companies” according to the FT article. Why? One reason is,

A scarier reason, according to the FT article:

Also why are foreign investors willing to “lend the US a virtually limitless supply of dlrs” as Mr. Blankfein wonders?

Not only could the world keep exporting us their deflation, but what we see within the US is also scary:

Adding to the real problems, look at the sheer stupidity of Senator McConnell in suggesting States should be free to file for bankruptcy. Not only did he give NY Governor Cuomo a chance to be both Dirty Harry & Ronald Reagan, but how many Muni investors did he scare into selling their Muni funds & piling into Treasury funds?

How does this mess square with Lakshman Achuthan’s case of this recession ending & flipping to a new virtuous cycle? He warns:

Finally, Mr. Blankfein might want to speak to the “Buffet” of Treasury investing: 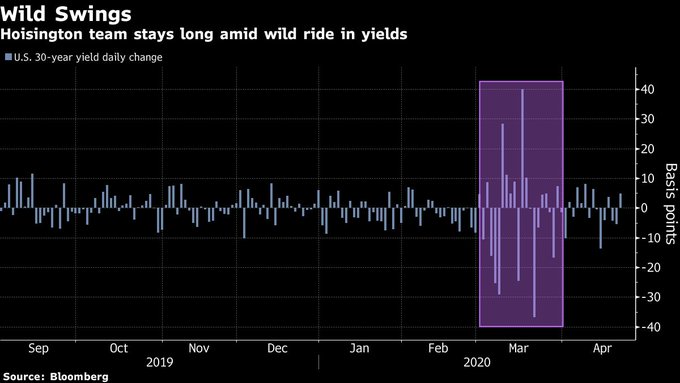 Imagine what this might do to valuations of companies with high growth rates, fortress like balance sheets & huge customer bases that grow more dependent on buying more & more with greater convenience from these companies. Know also that fall in Treasury yields increases the PE multiples of such technology companies.

You know this forecast of Hoisington was not the scariest thing we heard this week, very scary as it is. No we were appalled at the Unusual Options Activity highlighted by CNBC’s Jon Najarian – Buy TLT May 180 calls. That is a 6% rally in TLT by May expiration. Holy Whatever!

Speaking of Jon Najarian, he also said that he expects Gold to get to $2,000 & remains bullish on GDX calls. Smart given that GDX & GDXJ, Gold miner ETFs, were up 13% & 14% resp.  What a pair of twins that makes, David Rosenberg & Jon Najarian! 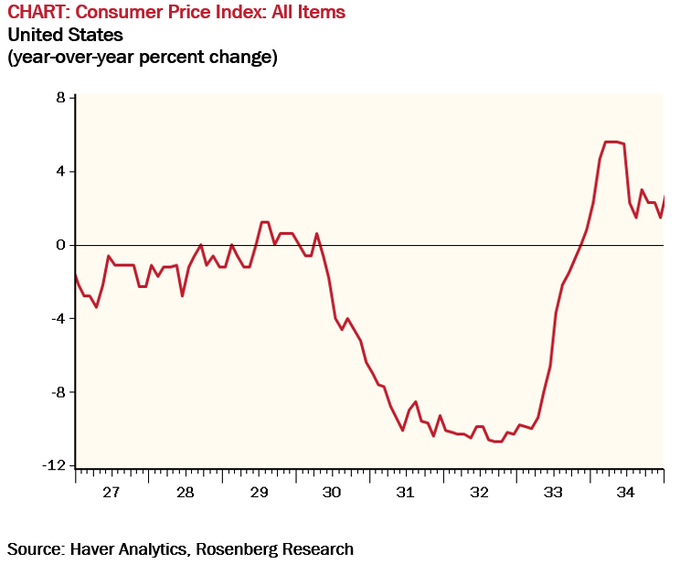 That brings us to the craziest thing we have seen. The fall in May Oil to negative $37 on settlement. The negative rates in Europe we hated but at least could figure those out. But the May oil crash was just nuts. The only thing crazier could be perpetual Government bonds that don’t ever mature but fluctuate in yield & price and settle monthly on a cheapest to deliver basis. So the settlement yield would mainly be based on demand & supply of physical holdings of required bonds. Wouldn’t touch such a bond, not on our life.

This entire oil mess is beyond us. So the best way to think about it is to listen to Mark Fisher, the trader extraordinaire. Simply his view, as expressed on that day, was buy June oil below $15 & sell above $20. But be very careful before June oil expires in mid-May because the same could be repeated around that time.

He also alluded to $USO, the utterly stupid vehicle as it was constructed. Now Fisher said it has become a closed end fund. What does that mean? Does that now trade at discount or premium to its NAV? Does $USO have a NAV? And how useless that NAV would be when oil futures trade the way they may around expiry?

The most insane, positively insane, part of this oil mess is the rally in XLE, integrated Oil companies ETF, a rally that touched its near term resistance at $35 this week as May oil fell below $37. Next week Exxon & Chevron are on deck with their earnings. As Craig Johnson of Piper said, if XLE breaks through $35, it could go to $40.