We have used the war analogy since the launch of the CoronaVirus task force by the President in the Rose Garden. We used it deliberately to describe how all the branches of the US Government were coming together to unleash the power of USA. This Thursday, we read another war analogy from an unlikely source. Krishna Guha, the erudite ex-Fed guy at Evercore ISI, described the Fed’s “stunning in its scope” action as below in his note:

But the Fed is only one branch & no country goes to war with only 1 branch. What we saw on Thursday was the new & current “Bank of Uncle Sam“, as Paul McCulley, the ex-Pimco guru, labelled it on Thursday on CNBC. He spoke of “beautiful cooperation” between the Fed, the Treasury & the Congress.

Read what Chair Powell said in his Q&A on Thursday, via Jim Bianco tweets:

So what has the Fed achieved, really? The best answer came from CNBC’s Mike Santoli who said “Fed has taken away the scariest scenarios“.

Dwyer is absolutely correct. Businesses, individuals are in an impossible situation because of enforced shut-down, lock-down conditions. There is nothing they can do until the economy reopens for business & until the damage done to finances of companies can be unwound. This is why it is absolutely mandatory to prevent a credit crisis taking hold before the economy has a chance to recover. That is what the Fed is determined to do at least via its unlimited market operations.

Last week, we pointed to the havoc in mortgages via a chart of Anally Mortgage stock, NLY. This week, NLY rallied by 52.5%, the bulk of the gains coming on Wednesday & Thursday. High Yield ETFs, HYG & JNK, rallied by 12% on the week.

If you doubt the Fed, look at the bounce in Long Duration Treasuries which were sold in bulk during the Risk Parity meltdown. Remember the liquidation in LQD, the investment grade bond ETF? It is practically back to old highs on high volume. But what about HYG, you ask? Look at the chart of HYG vs. SPY via The Market Ear: 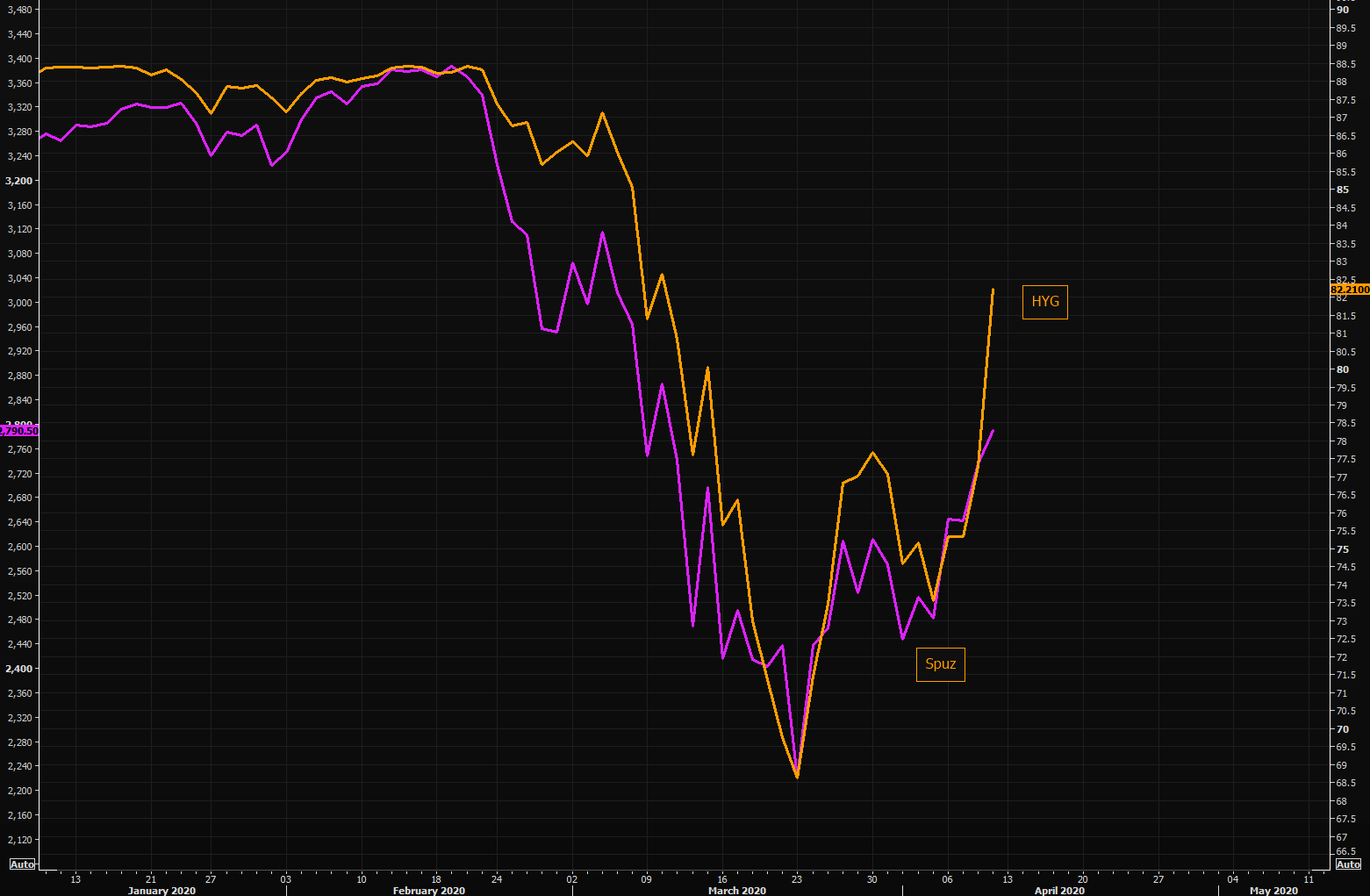 The message is loud & clear, at least in credit, meaning the stuff Fed can buy. Don’t fight this Fed, not when it is at War. As Krishna Guha, warned in his note –  “The Fed hasn’t yet exhausted its ammunition. There’s more it can do.”

Simply put, this is not merely a tale of “two sinks”, as Jeff Gundlach put it. There is no shortage of “sinks” at the Fed:

Remember Thursday, March 19? That was the day we noticed a turn in what we call real reflection of Fed’s liquidity working. That Thursday morning DPG, a leveraged credit Closed End Fund (CEF), began outperforming HYG, the unleveraged credit ETF. Also the leveraged Muni funds like NAN began outperforming MUB, the unleveraged iShares Muni ETF.  Looking back, what a turn it proved to be, both in absolute & relative performance:

As a disclaimer, we don’t claim to have any special expertise in closed end funds & we certainly don’t have the infrastructure to research the large number of such funds. So we tend to use the funds recommended by Bond Kings & such. For example, we learned about Muni closed end funds by reading what Bill Gross used to say about them. We also remember that Jeff Gundlach recommended buying DPG & UTG near the bottom of the high yield sell off in February 2016.

Buying Muni CEFs as the Fed is about to begin a rate cutting cycle & selling them as the Fed is about to being a rate tightening cycle has proven to be a winning strategy. But these funds don’t do well during credit crisis, either the 2008-2009 kind or the March 2020 kind. On the other hand, buying them as the Fed starts pumping in liquidity to reduce/end credit crisis tends to work well. This is simply our experience, not a recommendation in any way. 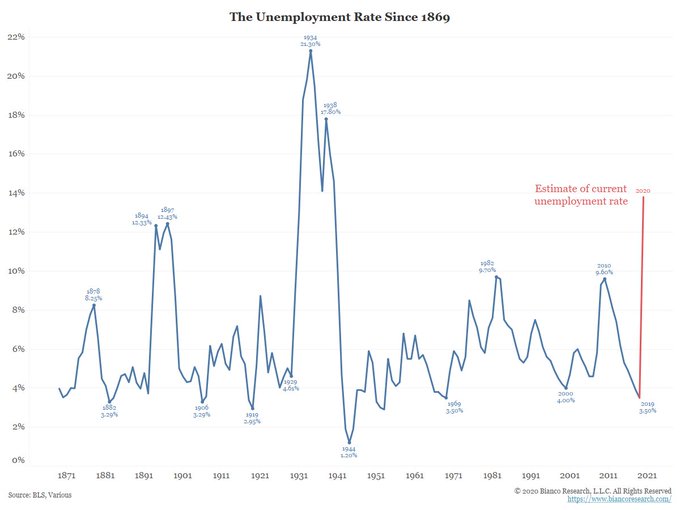 Mike Wilson of Morgan Stanley said a couple of weeks ago that this recession will be steep but short. Now he has some company. Look what David Rosenberg said:

Hmmm! But what about the plunge in the Weekly Leading Index? Look what its creator/administrator tweeted this week! 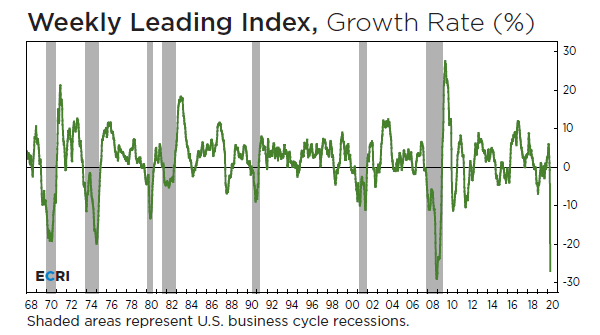 But what about the Vicious Cycle? 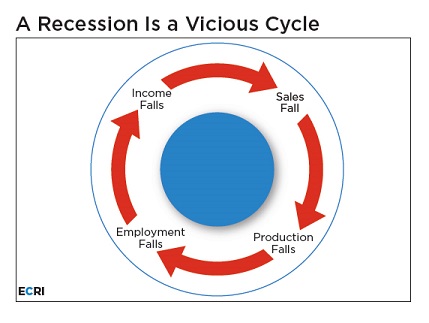 Is this what the S&P, especially the Russell 2000, were saying this past week?

Or did the stock market show what Tom McClellan wrote last week about the message from the bearishness?

Is that why a DeMarkian increased his shorts on Friday?

What about one who has been right on being long the rebound?

Then you have the emphatic tweet from the Bond King:

What about the VIX? One view: 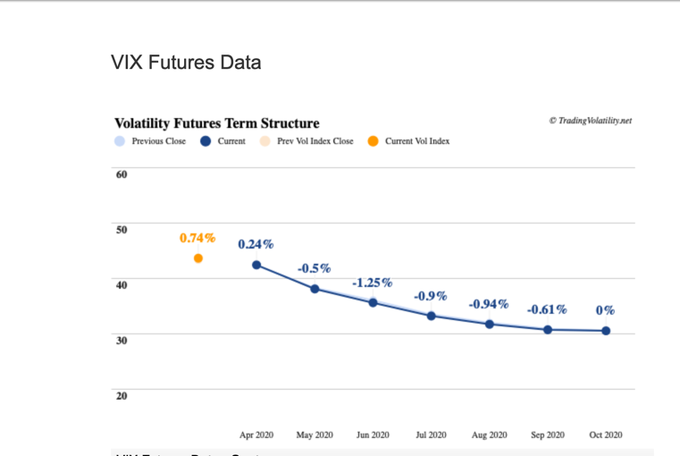 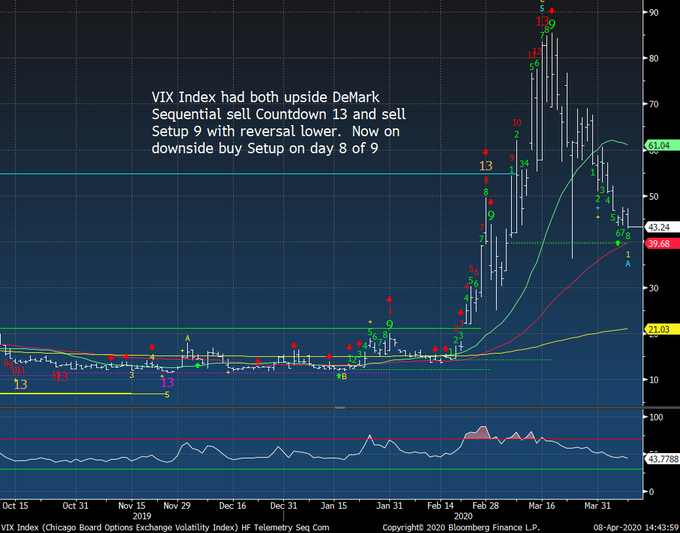 This near term stuff aside, is there a message in the volatility? 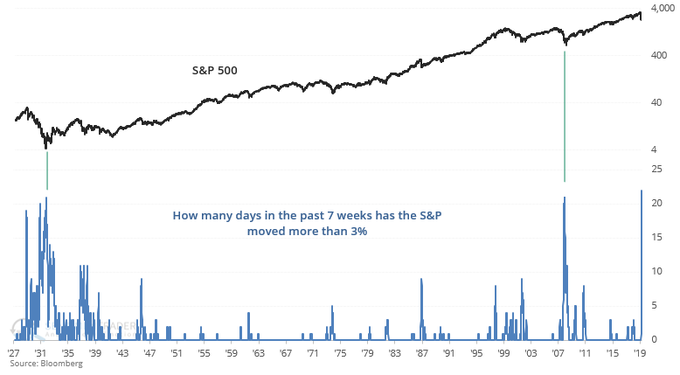 In a similar spirit, Market Ear sees a similarity to May 2009: 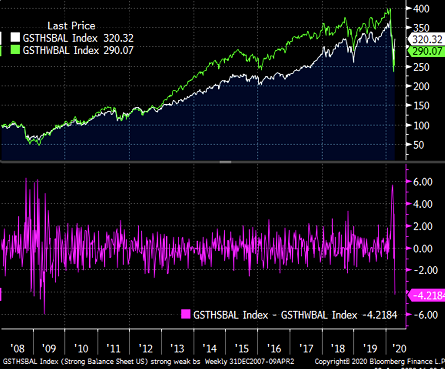 Gold mining stocks were not the only ones rallying hard. Mosaic was up 30% on the week, as were base metal stocks with FCX up 30% & CLF up 25% .  And amazingly, Oil services ETF was up 20% on the week, while Oil fell 17%. Guess Fed support for High Yield bonds is far more important for the beleaguered oil services sector than the price oil or the disappointing 10 million barrel OPEC deal.