The entire world now knows that there is a potential conflict developing on the Western Indo-China border. In his classic style, President Trump talked about this trouble between two 1.4 billion people countries with powerful militaries & offered to mediate.

This was the President of the United States with the most powerful military in the World. And the above comments came after his tough comments about China in his speech yesterday.

Even more direct were comments about China’s behavior towards India by Ambassador Alice Wells, top diplomat for the Indian Subcontinent & Central Asia:

Then Secretary of Defense Mark Esper got involved:

The message is simple. The United States has India’s back at least diplomatically.

On the other hand, China is already on the defensive diplomatically & economically. Almost every country, every group of countries, blames China for the terrible damage inflicted on their economies by the Chinese Wuhan virus.

Doesn’t China have far more important matters on its plate such as Hong Kong & Taiwan? Why did they add to their public relations mess by trying to coerce India via troop incursions?

An authoritative book on China-Japan, The Perils of Proximity, includes a comment on when China uses or tries to use force:

There is no question that Taiwan & South China Sea are of paramount importance to China. We have no doubt that China will do as it has said, go to war if Taiwan declares its independence. In that situation, China’s biggest worry would be India entering Tibet or Xinjiang while China is fighting a war with Taiwan, assisted by USA & Japan.

So far, the idea that Indian Army might enter Tibet or worse Xinjiang was laughable. Now it may not that laughable.

China has always been confident that time is on its side vs. the USA & the West. But even in that confident frame of mind, China knows that time is NOT on China’s side when it comes to India, either demographically, economically or even militarily. That is why China tries hard to coerce India or diminish  India’s posture vis-a-vis China. Their basic style is to send Chinese troops into Indian territory to either occupy more Indian territory or embarrass India.

But why did China provoke a major incident now by sending its troops into at the north-eastern corner of India’s Ladakh province? Specifically why Ladakh & why now?

As the map below shows, Ladakh borders Chinese-occupied Xinjiang, Chinese-occupied Aksai Chin & sits on top of the Karakorum Highway that links China to NaPakistan-occupied Kashmir all the way to the Arabian Sea. 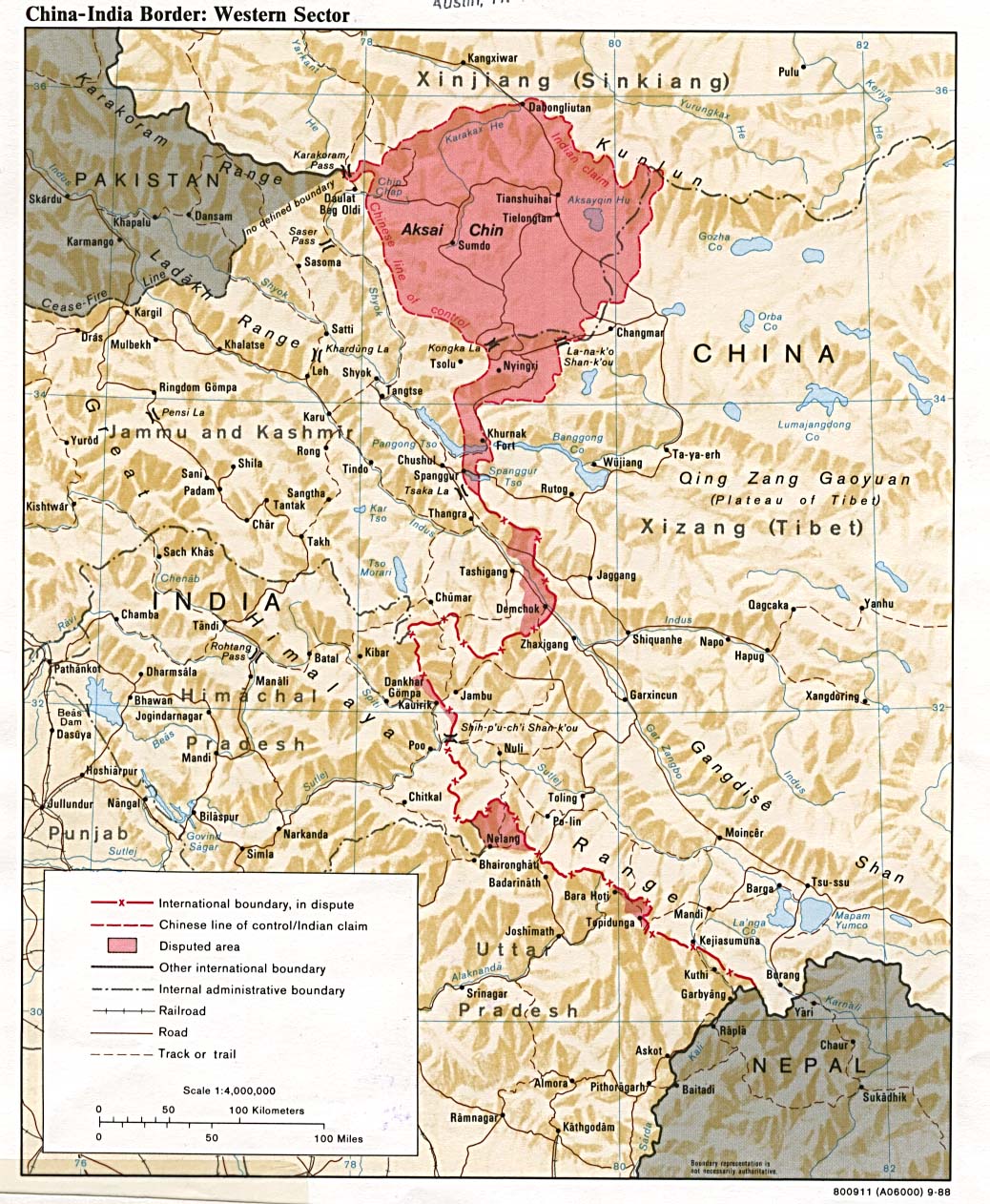 The red area is Aksai Chin which China annexed by simply sending its troops there in late 1950s when Indian military wasn’t even there. The dark green area on the left is NaPak-occupied Gilgit-Baltistan area of Kashmir. The small line connecting to two is the Karakorum highway at the top of the world. A serious military power could snap this link in a heartbeat.

But that India was not even a power, let alone a serious one. Besides India couldn’t even move troops to that area without roads or an airstrip. So China was sure that they could take that corner area of Ladakh any time they wanted without any risk.

But even a passive India had its limits. So in 2008, India activated the old airstrip at Daulat Beg Oldi located merely 8 km below the Karakorum highway. But that India only had ancient Russian Antonov-32 & MI-17 helicopters to ferry small numbers of troops into that strip.

Then look what happened last year – the long awaited road from Ladakh’s capital Leh to Daulat Beg Oldi was completed. 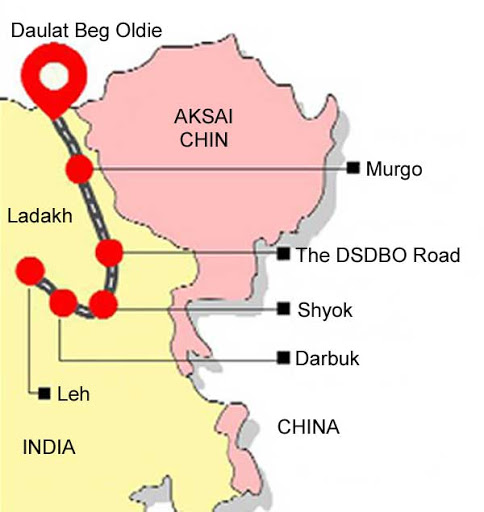 Now India has a motorable road from Leh all the way to Daulat Beg Oldi over the turbulent Shyok river. And, as Lt. Gen Prakash Katoch pointed out in his article in the Indian Defense Review,

But doesn’t every military road need a feeder road too? 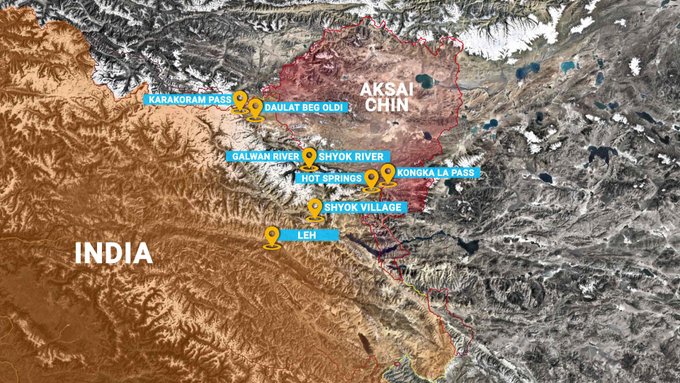 So on May 9-May 10, India began building a feeder road between the Galwan River & the Shyok River.

These are roads built in Indian territory by India. But to China these roads dramatically decrease the infrastructure superiority Chinese military has enjoyed since 1962. So the Chinese sent troops into the Galwan River area to halt Indian military’s road infrastructure development, as Jeff Shaw said on CNBC-TV18 in India.

But why? What does that high altitude & virtually barren region have to justify this level of long term worry? Look at the map below. 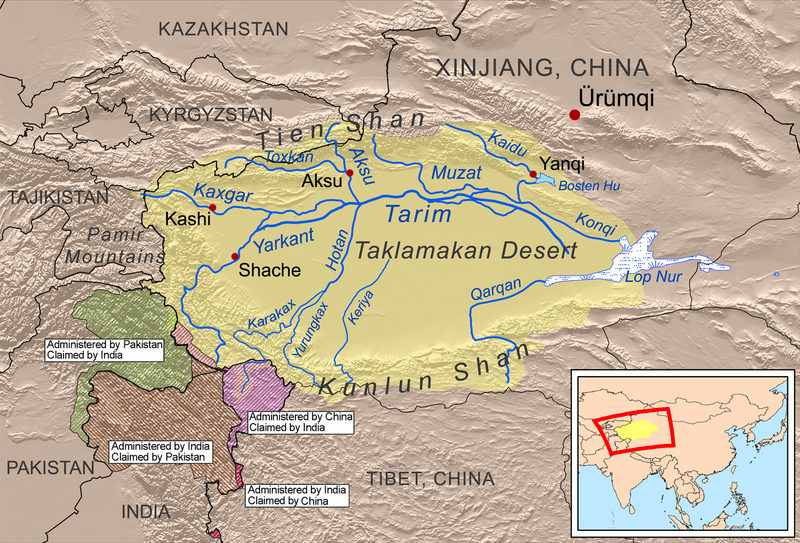 Remember where Daulat Beg Oldi air strip is from the map at the beginning of this section? Right at the tip of the triangular edge where Napak-Baltistan, India & Aksai-Chin meet. Now see what meets Daulat Beg Oldi (DBO) from the Xinjiang side. The old trade route (in blue) from Yarkant in Xinjiang. And look how close Kaxgar, capital of Xinjiang, is to Yarkand.

Now what is the weakest province in China from a diplomatic & even unrest point of view? Xinjiang with the concentration camps for Uighurs. So a powerful military presence in Ladakh would create a risk to China’s control of Xinjiang.

Settle what? The taking back of Kashmir occupied now by NaPakistan. Now look at the map at the beginning of this section. Focus on the dark green area labelled Pakistan that meets Chinese-occupied Aksai Chin via the Karakorum Highway. Minister JaiShankar is talking about that dark green area becoming a part of India as it always was. Imagine that is now a part of India with the Indian army based there. How exposed will Chinese-occupied Xinjiang get then? Can China truly assume that India will not enter Xinjiang while Chinese military is fighting for taking over Taiwan & control of South China sea?

Now think ahead a few years and think of a more prosperous & more powerful India with better aircraft & a more lethal army based in today’s Napak-occupied Kashmir. If that is not a nightmare situation for Chinese military strategists, we don’t know what is.

Now consider how China always claims territory based on history & old Chinese control? What about old historical control of Xinjiang, you ask? 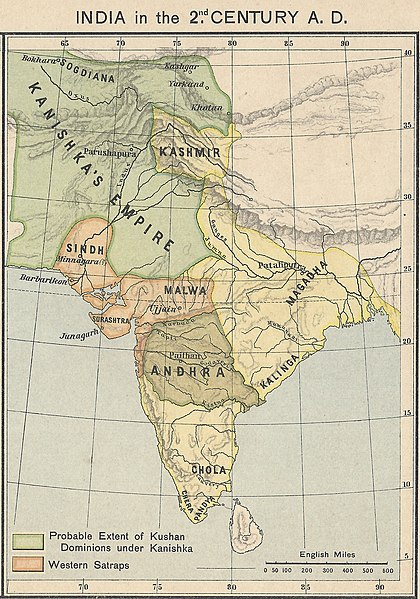 Xinjiang was a part of the famous Kushan empire of the celebrated Buddhist emperor Kanishka the Great. He was responsible for spreading Mahayana Buddhism from Indian Gaandhaar across the Karakorum range into China.

Add it all up and ask yourself if you would not try to shut down Indian military infrastructure now? Unfortunately both Doklam-2017 & Ladakh now show they are too late. That opportunity has already closed.

In this section, we borrow heavily from the authoritative report authored in March 2020 by Frank O’Donnell & Alexander K. Bollfras of Harvard’s Belfer Center. It is titled The Strategic Postures of China & India: A Visual Guide. It is a comprehensive report that includes both nuclear & conventional forces across the entire border from Ladakh in the West across Tibet to Arunachal Pradesh in the East.

We will only discuss conventional forces available in the Western or Ladakh sector. The report points out,

What about the Chinese Air force (PLAAF)?

So what is the report’s conclusion?

Now you understand why Prime Minister Modi has been firm in not allowing China to bully India.