What would a perfect week for markets would look like at this stage? Big indices Dow & SPX go up; Nasdaq keeps its torrid outperformance; Laggard sectors like small caps & financials outperform strongly; energy stocks & oil keep flying; copper & iron ore rally; miners rally hard; emerging markets also outperform;  High yield rallies while Treasuries fall; Treasury yield curve steepens. Wouldn’t that be a perfect week not just for investors but even for the Fed? It would be a sign that everything is working according to the plan.

Guess what? The above wish list came true this week:

The Fed announced its intentions to buy high yield debt once some structures got into place, probably goaded by the Gundlach tweet of the Friday before.

Yes, but did this week exhaust all the ammunition? Not really when you start enumerating.

For those who like  pictures & dream of a bonfire of the shorts, 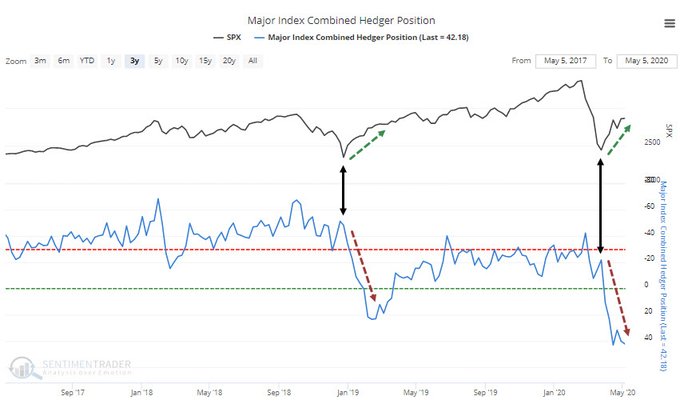 Not only are speculators short futures, but Tom McClellan saw “Investors Fleeing Out of SPY“. 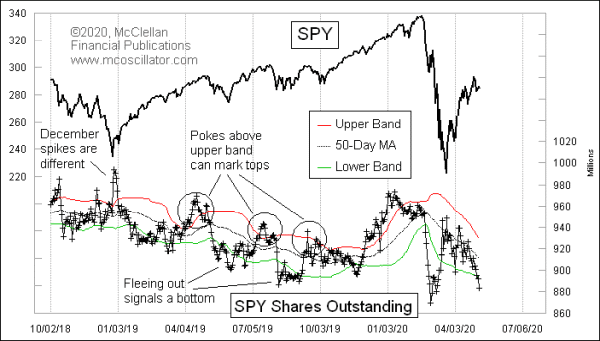 Isn’t that a bad thing? Not so, explains Mr. McClellan:

OK, but what is the VIX saying? Kill Vol, apparently! (with apologies to Quentin Tarantino & Uma* Thurman of Kill Bill). 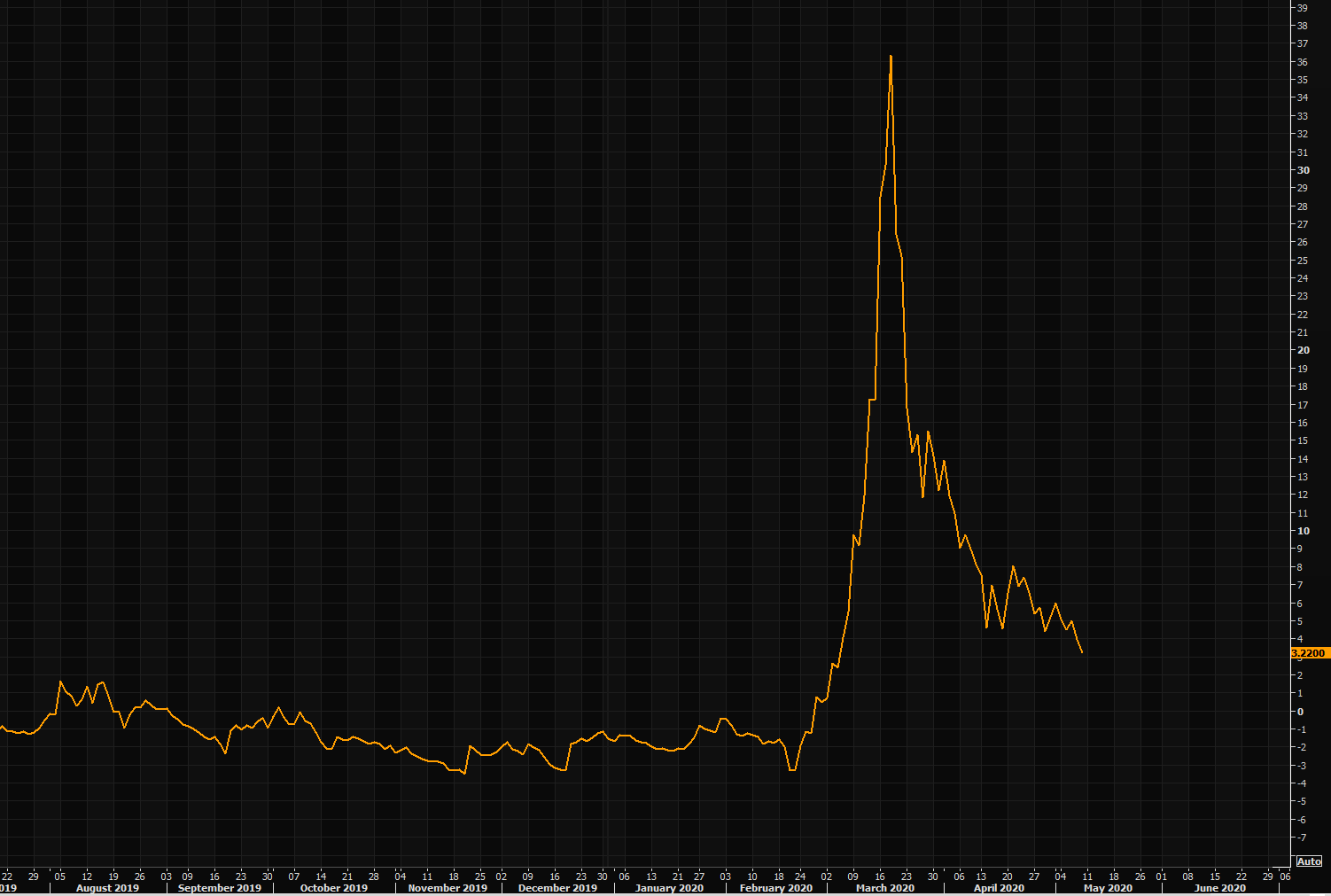 The above is a kind of artificial or technical ammunition. What about real cash that could come in? BAML points out that cash in money market funds is now at $4.8 trillion. And fund managers are petrified of negative rates in the Treasury markets & the impact on their funds & fees. Further, as BAML points out, courtesy of Market Ear, that

But is this money really likely to move? That brings us to the mainstay of the US economy.

*Uma is a juxtaposition of U (you) & No (Ma). Goddess Paarvati was extremely naughty as a child & her mother used to keep saying U Ma meaning don’t do that. Eventually U Ma became Paarvati’s nickname & now Uma is one of the most popular names for women in India. And Uma/Paarvati in her Durga role is a violent destroyer of evil, much more violent than portrayed by Uma Thurman.

We all know what Rick Rieder of BlackRock & other Mahaa-Jan like him are saying:

But what about disposable income of consumers? That picture can’t be good, right? 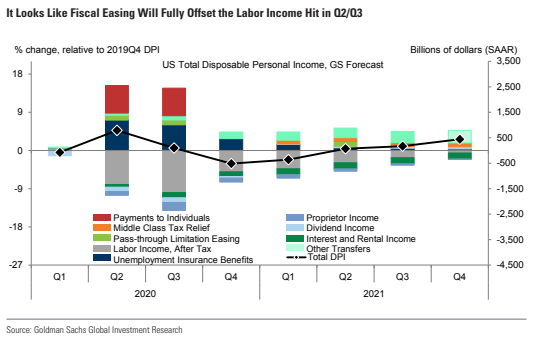 Holy Whatchamacallit! But wouldn’t this increased disposable income go towards building personal savings given the ravages of CoronaVirus? Look at the picture below from BAML, courtesy of Market Ear: 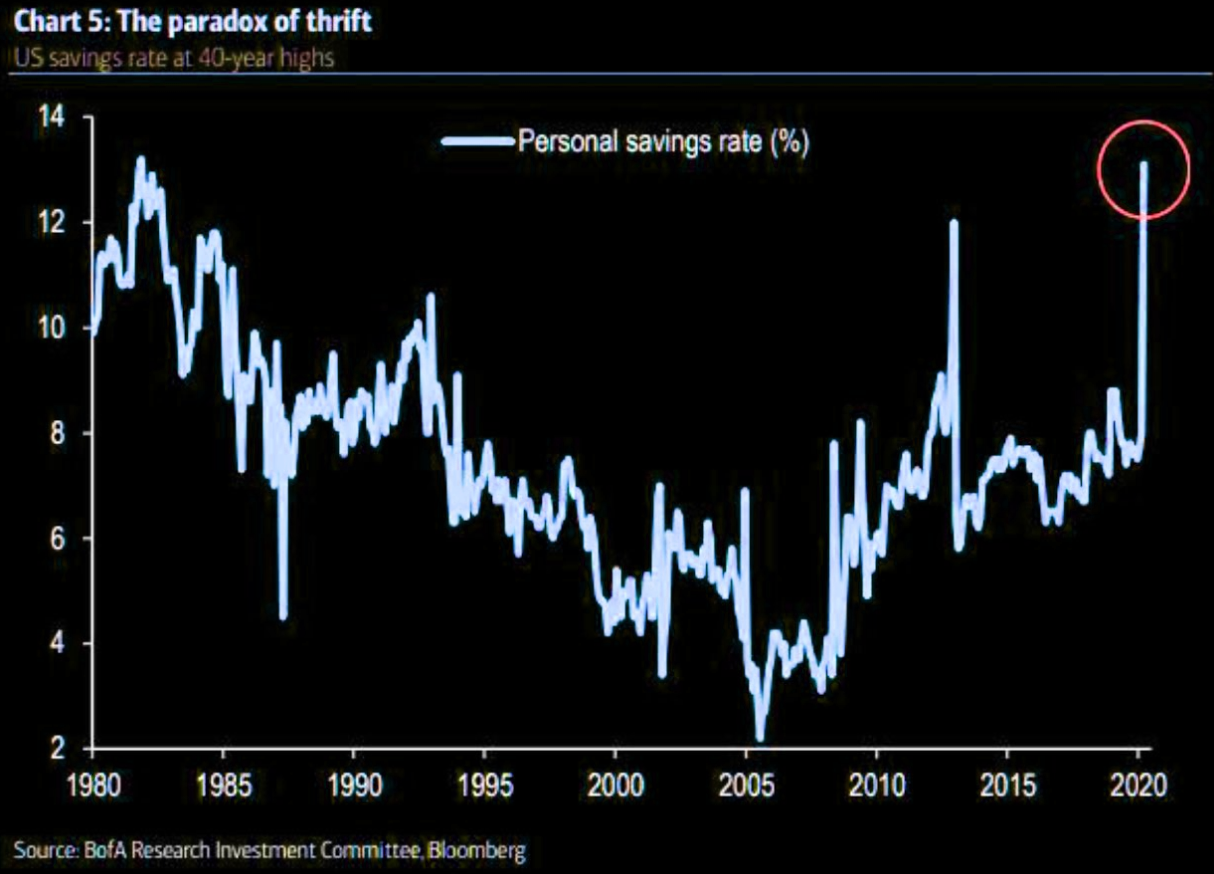 And this is real money, folks. Not some artificial construct like CTAs sitting flat. On the other hand, cash doesn’t have to flow into stocks. Isn’t demand for income more secular when interest rates are virtually near zero, especially the 5.49% income kind ?

How critical is the Fed put behind corporate credit?

We can’t say for sure but we feel this $25 billion deal could not have been done without the Fed put. Companies like Boeing that are critical to the manufacturing sector are precisely the ones that the Fed will not go down. Actually candidates for the Fed ” guarantee” don’t even have to be as critical as Boeing. They simply need to be large cap, it seems. 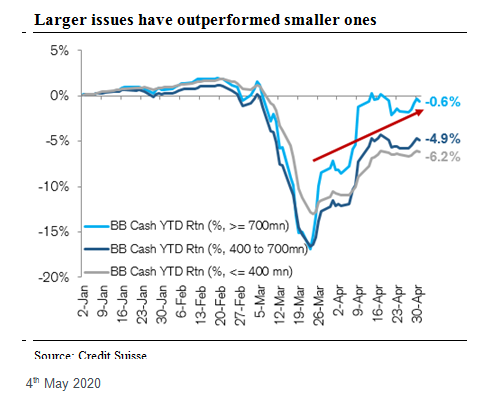 Then you have another supporting condition for risk markets: 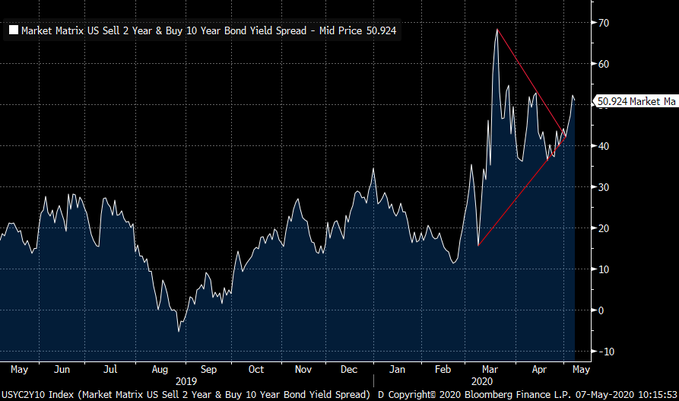 If that is not enough, note how the 30-10 year yield spread (NOB) has steepened as Rick Santelli pointed out on Friday. That should help in reducing the fear of deflation that lies under the worries.

Given all of the above, wasn’t last week an almost perfect week for risk markets?

But why stop there? After all, the star of the week was Oil including energy stocks. The rally in energy stocks has been absolutely stupendous since they were  virtually dumped by all. The energy sector is up 7 weeks in a row. Is it time for a reversal? No, said Carter Worth, resident technician at CNBC Options Action on Friday:

Virtually every commodity sector rallied this week. Gold miners continued their torrid run with GDX & GDXJ up 4%+ on the week. CLF, the iron ore stock, FCX, the copper stocks & X, the best known steel stock rallied 16%, 9% and 13% resp. Even MOS from the Ag sector rallied 6.7% on the week.

The only fly in the ointment, perhaps, was the rally in the Dollar.

The pain in Italy is so clear, so vivid that even Ursula von der Leyen (European Commission head) apologized in late April for not acting sooner. And Brussels suspended budget deficit limits & eased rules governing state aid. So far so good.

This week the other shoe fell. The German Constitutional Court issued a firing on Fort Sumter type landmark ruling. As Bear Traps reports,

In response , the European Court of Justice, EU’s top court, said in a rare statement that

Meaning only the EU court determines what is legal & the German Bundesbank is obligated to go by what the EU court says.

So why are the European bond markets & the Euro still sanguine?  As the FT reports,

The real fight underneath does have Fort Sumter like emotions. What Italians think EU should do for Italy & Southern Europe with German money is totally contrary to what Germans think Germany & Northern Europe should do for Italy with German money. Underlying this is the real question whether Germany is a nation or just one member of EU? Merkel has tried her best to reduce, if not eradicate, the “national” ethos of Germany. Will it survive her?

In the meantime, watch Italy CDS spreads. At least that is what the Bear Traps Chart suggests:

This term & its stated goal has been bandied by many & for long. The reality is women are very rarely given the chance to command & run mission critical functions especially under extreme conditions. This week, we came across an exception that stunned us.

Think back to February 27, 2019 when air forces of two nuclear-armed neighbors got into a large dogfight, one of the largest such battles in recent years. That day 27 Napak fighter jets, including 10 US-made F16 Falcons, flew towards India. In response, the Indian Air Force (IAF) scrambled its fighters, MIG-21s, SU-30s & Mirage 2000, to intercept & engage. In that 16 minute dogfight, an Indian MIG-21 shot down a Napak F-16 & was subsequently shot down itself. The Indian pilot, Wing Commander Abhinandan, landed in Napak territory & was taken into custody. He was then released to India after intense pressure.

To our amazement, we discovered this week that the Indian Air Force controller of this dogfight, the fighter controller who talks & instructs the fighter pilots as they engage enemy aircraft in a live battle, was a woman. This woman, who had dreamed of joining the Indian Air Force as a child, actually ended up running the biggest air dogfight of recent years in the world. In her 24 minute TV interview (in English), this woman from a small town in India simply said (min 22:35-22:45)

Listen to this not because you care about the dogfight or geopolitics but because it is rare to find a woman who has been given such an incredible responsibility & one who manages it with confident humility.