The reality is that all of India is primarily focused on economic development of Indians. That makes India focused inwards. As a result, Indian foreign policy has been mainly reactive and the Indian military defense-focused. As a result, the Indian Army has not been alert to threats & not quick to respond to encroachments. The preferred choice has been to assume that the neighboring regimes will adhere to the agreed upon status quo.

Think back to the high altitude mountainous line of control between India & Napakistan in Kashmir. The peaks are some 14,000+ feet high & almost unreachable in winter. So the Indian army had always vacated  their forward posts on mountain peaks in winter. Sensible practice that had been the norm for both countries  for decades.

Until 1999. That winter, Napaki troops & their terrorist outfits climbed up to the Himalayan peaks in the dead of winter. They built bunkers, stationed troops with mortars and posed a dangerous threat to the one road that connects the southern & northern parts of Kashmir, the only road available to the Indian Army to move troops & equipment.

The Kargil war was a game changer for both the Indian Military & the Napaki military. The Indian army now is on alert in all areas of the line of control and Kargil-1999 was the last military adventure undertaken by the Napaki Army against India.

Just as the Napaki army left the Himalayan peaks alone in winter for decades, the Chinese army had conducted & withdrawn from hundreds of small incursions along the long India-China line of control for decades, the big ones being conflict at Nathu La pass in Sikkim in 1967, Sumdorong Chu in Arunachal Pradesh in 1986 and the Doklam-Bhutan incursion in 2017. Each one resulted in Chinese backing off after India reacted with military reinforcements.

And that seemed to work with the Chinese agreeing to dismantle & withdraw from Galwan. Then it changed. The Chinese withdrew and then came back with force to attack & kill the small contingent of Indian soldiers who were there to watch over the Chinese withdrawal.

This was a very different encroachment by China just as Kargil-1999 was a very different encroachment by Napakistan. It was a planned attack designed & orchestrated by General Zhao Zongqi, a hand-picked choice of Xi Jin Ping. Zhao was the same General who had launched the Doklam incursion in 2017. He had been seething about that reversal & reportedly looking for a chance to humiliate India especially as PM Modi was occupied with the CoronaVirus pandemic: 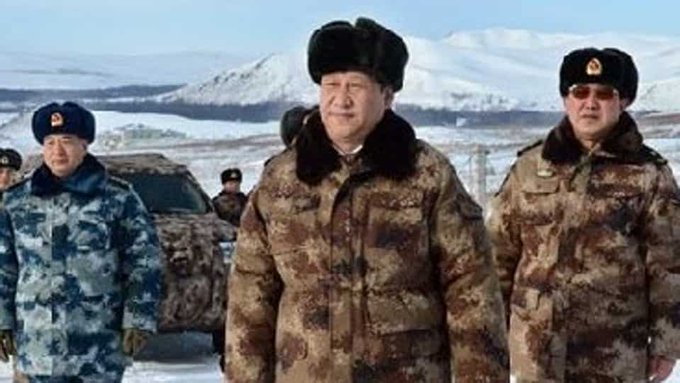 And his plan might have worked but for the bravery & sheer will of the Indian soldiers. Despite losing their commanding officer, they returned with more troops & killed about 45 Chinese soldiers while losing 20 of their own. Despite this perfidy, PM Modi decided to talk more to resolve the situation and it looked for a day that the Chinese would pull back. Once again the Chinese pulled a reversal and went back into Galwan area with more soldiers & construction.

That did it. Now the Indian military has moved its positions to the line of control all across Ladakh with heavy artillery as well as air-superiority fighters & deep strike aircraft:

Not just in Ladakh, but reportedly,

What most people don’t know but what every military in the world knows is that the world’s largest & best military in high altitude warfare is the Indian Army with over 200,000 mountain-warfare trained troops in 12 divisions. As Huang Guozhi wrote for Modern Weaponry magazine,

Also according to a China expert quoted by the Hindustan Times,

If true, then Chinese President Xi Jin Ping made a very big mistake by allowing his pal Zhao Zongqi to attack Indian soldiers in Galwan.

Bulls are bullish & Bears are bearish. But pay heed when a Bear turns bullish or a Bull turns bearish. This is not just true of markets but of all human interactions, especially geostrategy.

Stratfor has hardly been a bull on India, especially on the Indian military or on India’s determination to speak with its military. But look what Rodger Baker, Senior VP of Strategic Analysis for Stratfor wrote this week in his article A Border Clash Portends a New Indian Strategy of Less Talk, More Action Against China.

In his section “Modi Sets the Tone” Baker writes,

In his section on the Indian military Baker writes,

In a comparison of the two militaries Baker writes,

As we all know, China has not revealed to its people the number of Chinese casualties in the clash at Galwan.  Can they ever admit that China lost more soldiers than India despite having larger number of troops and surprise on their side?

Another bear on India has been Geopolitical Futures. They have argued for some time that India is too beset with internal problems to be considered a major player in the world. But, coincidentally as India takes a hard military stance towards China’s encroachments, Geopolitical Futures published an article titled India Rising.

Speaking geopolitically, the article points out:

It is interesting how a strength can quickly become a big weakness. For decades, Russia has been a strategic ally and a reliable supplier of advanced military weapons. As a result, the major front-line weapons of the Indian military are imported from Russia – Sukhoi SU-30-MKI air superiority fighters, T-90 battle tanks, Kilo-class submarines. And with imports comes the need for continuous reliable supply of spare parts. Russia’s track record in this aspect has not been great even during the best of times.

Faced with US sanctions, a weak economy & lack of allies, today’s Russia needs China more than India. China is a permanent member of the UN Security Council with a Veto and allows Russia to not face US & Europe singlehandedly. China is also a big buyer of Russia’e energy, Russia largest export.

So would Russia continue to supply such front-lines weapons to India for use against its new ally China? Would Russia go ahead with the sale of S-400 anti-aircraft system to defend against Chinese aircraft? On the other hand, the Indian military is Russia’s largest customer and success of Indian military with Russian weapons has been Russia’s best marketing for decades. Russian defense companies are debt laden and not doing very well. So can Russia afford to say No to India and consequently become a captive of China?

These are critical questions for India and for the Indian military. So the Indian Defense Minister went to Moscow this week to press for early delivery of the S-400 system and supply of 30+ new fighter aircraft.

Geopolitical Futures reported on Friday that,

This is a big relief for the Indian military at least for now. But this dependence on Russia also shows that India needs to accelerate domestic manufacture/assembly of its front-line weapon systems. No country became a major player without domestic production of its critical weapon systems.

If India & PM Modi have actually decided to become more militarily assertive against China and if PM Modi is able to build up the Indian military with more sophisticated weapons from America, France, Israel and Russia, then President Xi & his pal Zhao may have done something truly novel & remarkable – They would have lost the war without winning a battle.