Then he made it clearer: 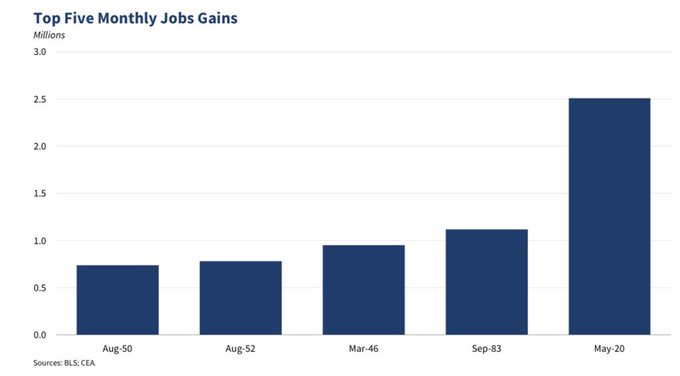 Look at that bar & you may also repeat:

Almost right away, came this, 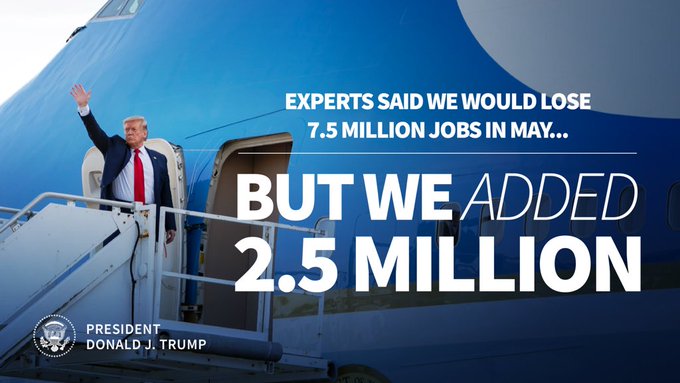 If that doesn’t get through to people,

This is not a political segment. It is purely a market segment in that ratcheting fears of a Biden win will be, in our opinion, an obstacle for the stock market in the summer. This jobs report might stop such fears from ratcheting.

Not merely that. The Senate GOP is now likely to mobilize behind President Trump because they follow strength & because they know if he loses in November, they will lose the Senate. So they will fall in behind the Payroll Tax Cut that President Trump wants & the House Democrats will not get too much in their way because they also have to face the voters. So get ready for another stimulus bill, this time with a Payroll Tax Cut and the promise of a big infrastructure program in 2021. Don’t you think that will be bullish for the fall?

Our core thesis since March has been that the Fed will make the “too much” mistake this year instead of the “too little” mistake they made in 2007. Do you remember the last time the Fed made such a determined decision to err on the “too much” side? It was in November 1998. That Fed & the entire street was in panic about the Long Term Capital mess taking the street down. So the Fed poured & poured.

And what that economy like? Think back to July 1998 & you will recall that it was a strong economy. The damage to markets came from the huge money losing positions of the Nobel-littered Long Term Capital. That is why the pouring of more liquidity than needed in an economy that was fundamentally strong let loose animal spirits. And we got 1999.

How was the economy in February 2020? More job openings that people available to fill them. And then came the Pandemic. No one had seen anything like it. So the Fed went to war against it. They poured ahead of the spreading damage & poured the way no one had seen before. And they are still pouring it even at $7.16 trillion in the Fed’s Balance Sheet. 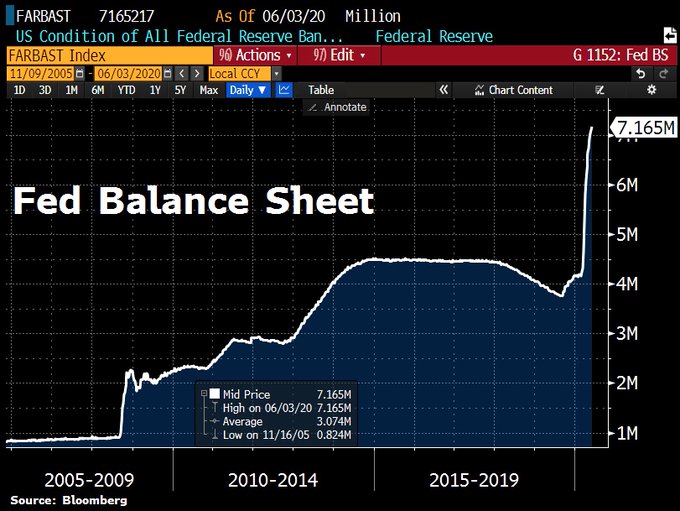 And they are pouring into an economy that was fundamentally strong before it was deliberately shut down. So by summer with New York, New Jersey & California reopening, Q3 economic numbers could actually stun on the upside. But the pouring by the Fed will continue to ward off against a Q4 relapse of the pandemic & the economy.

Not just that, but also because of the perennially scary specter is still in their face: 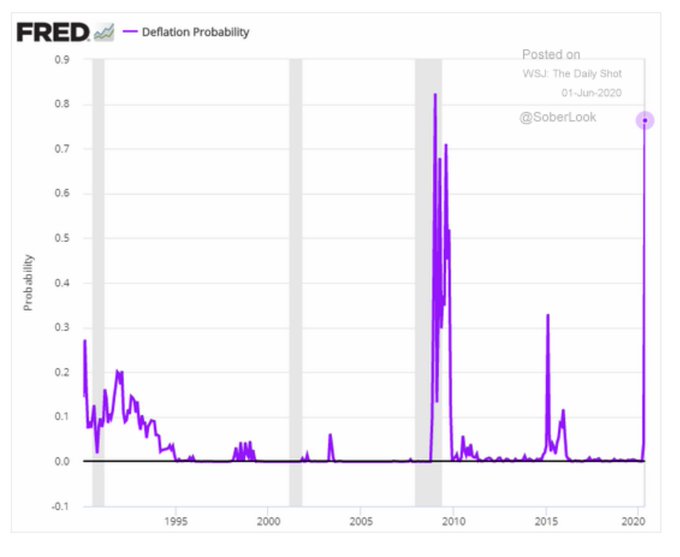 Simple minds like us think simply. And we saw something different, something simple in this year’s scary fall in markets & economy that we had not seen before not in 2000, 2006 or in 1998. This year, 2020, is the ONLY year with a massive stock market fall that features a reelection of a sitting President. Remember how detached President Bush seemed in 2008. He was done with his presidency. President Clinton paid very little attention to the economy in 2000. His presidency was nearing its end. There was no election in 1998 and President Clinton was totally preoccupied with something else.

In stark contrast, 2020 is the year for re-election of President Trump & the election for keeping the Senate Republican. And we saw The Multi-Pronged Launch on March 13 that Rose Garden address. On Thursday, March 19, we noticed risk assets make a turn. Then on March 23, the Fed announced its massive action plan. It was so obvious that week that we were all seeing America’s Power Unleashed.

What is this? The biggest 50-day S&P rally since 1952. The NDX rally is actually steeper.

As of Friday, both the Dow & the Russell 2000 have broken over their 200-day moving averages. Getting back to the Nasdaq 100, is a top being created with this strength? No says Tom McClellan in his article Non-Divergences Are Better Than Divergences:

Being simple, we don’t care whether a rally is called a “bull market” or a “bear market rally” as long as we make money in it. The question is where this rally can take us? Look what Michael Hartnett of BAML said, courtesy of The Market Ear:

Two weeks ago, we featured a clip of Jim Cramer explaining the methodology of Caroline Boroden in our section titled Binary:

This is a weird time when data scientists (who presumably do not give in to animal spirits) start talking about tremendous break-out rally potential after we have seen the best 50-day rally since 1952: 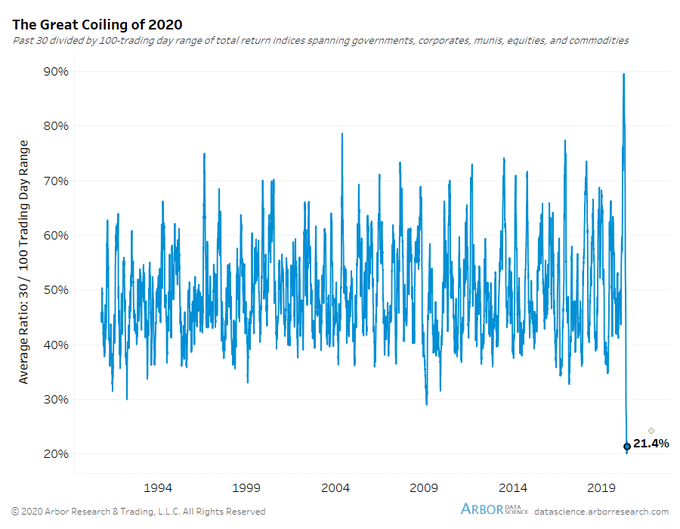 Any thought about which asset class looks ready to go whoopee? 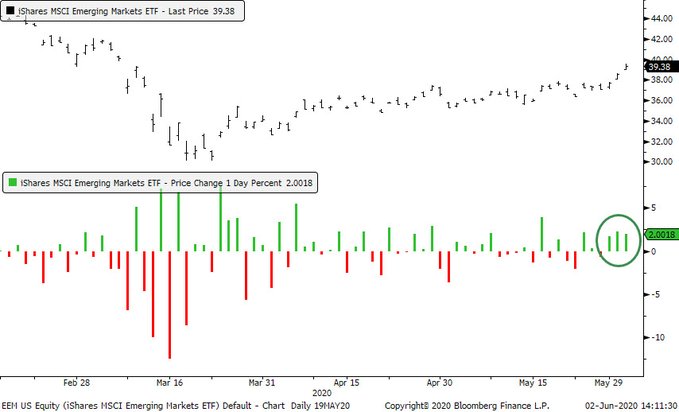 And one part of the EM space has already samba-ed to an extreme! 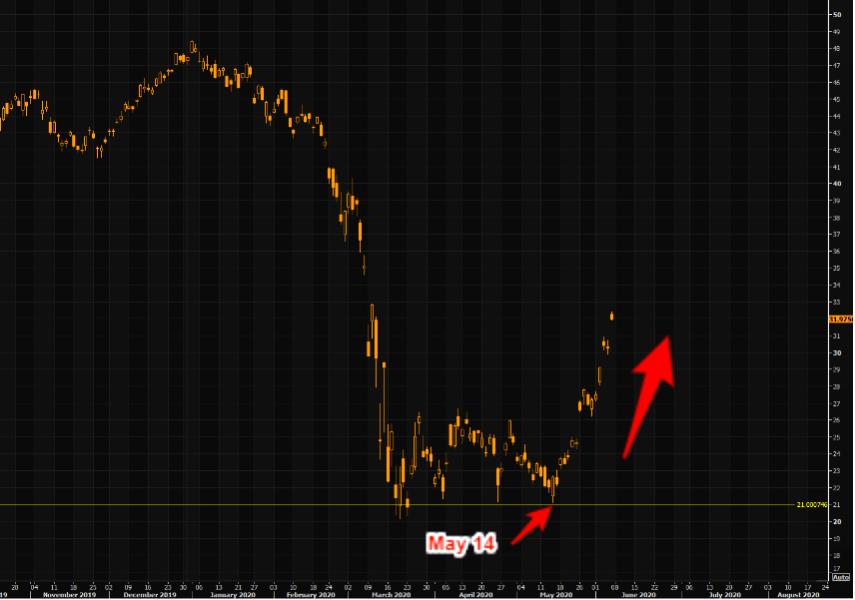 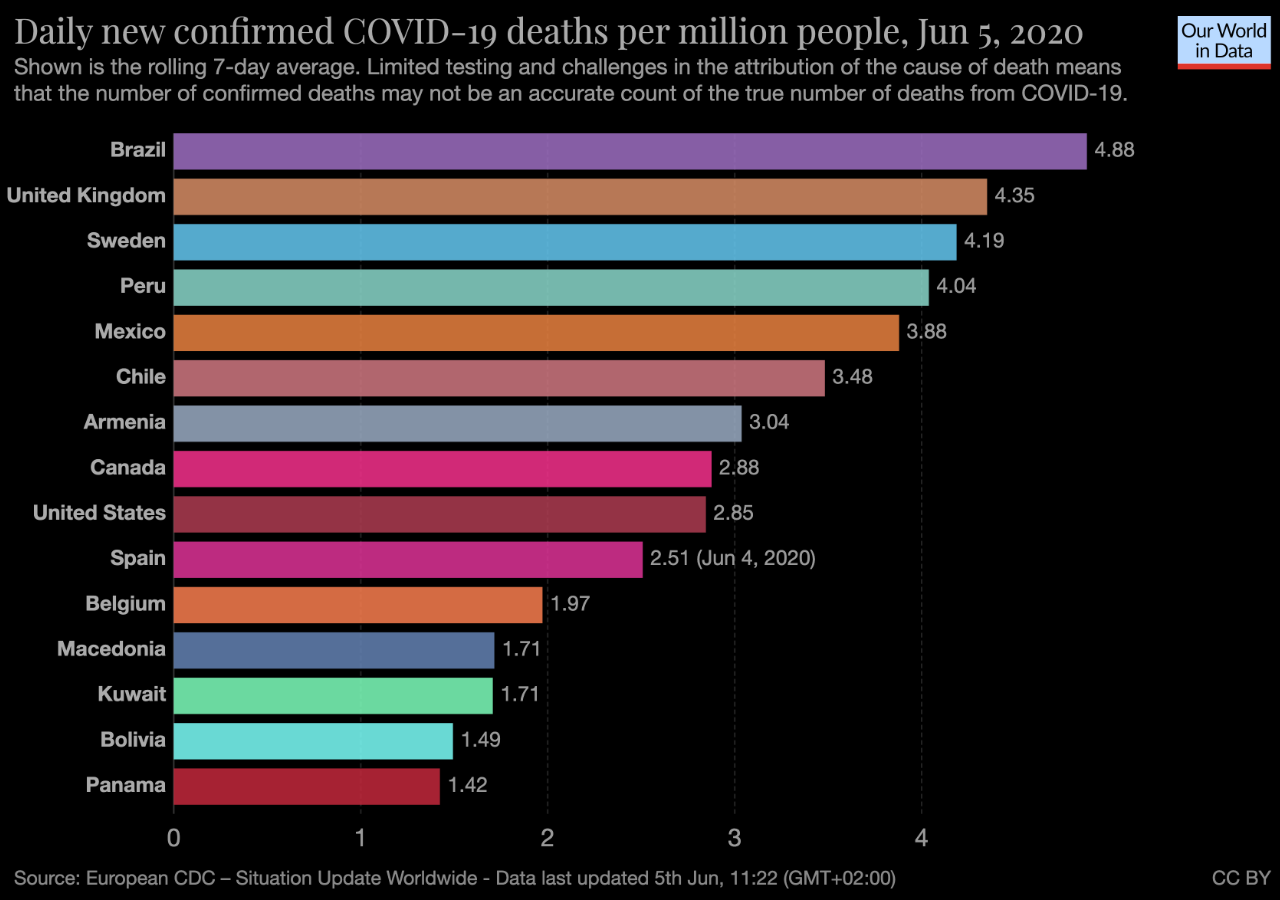 And don’t forget about the old world. The ECB delivered a Euro 600 billion increase in their PEPP stimulus program. No wonder, EWG, Germany ETF, rallied 9.9% this week.

We began terming broad rally weeks in May as “perfect”. Then we had to go up to the “perfecter” term. Now what do we call this past week? Perfectest?

The big question is whether we will see an “extreme move” in Treasury yields as we have seen in S&P or Brazil or other asset classes? Why would such a move occur? Below is Michael Hartnett via The Market Ear:

What factors could drive that? Hartnett’s reasoning via The Market Ear:

We will see what Chairman Powell says on Wednesday.

The star of the week was Oil & Energy stocks. WTI was up 12%; Brent was up 19%. But OIH, Oil Services ETF, was up 30% & the big cap XLE was up almost 15%. This was a bit too much for resident technician Carter Worth who said Short XOP to play the stop in the Oil rally: