1.Do extremes reverse or get more extreme to zero & infinity?

Remember what Charlie McElligott said to Erik Townsend of Macro Voices in their podcast last week? Mr. McElligott pointed out that CTA exposures were 98% long in bonds and described the CTA positions as “giving that 100% long signal” for bonds. Then he said in that podcast,

That’s the weird thing about extremes. They don’t listen to reason. Look what happened this week not just to nominal yields but also to real yields. The 5-year real yield made a new all-time low this week to minus 1%: 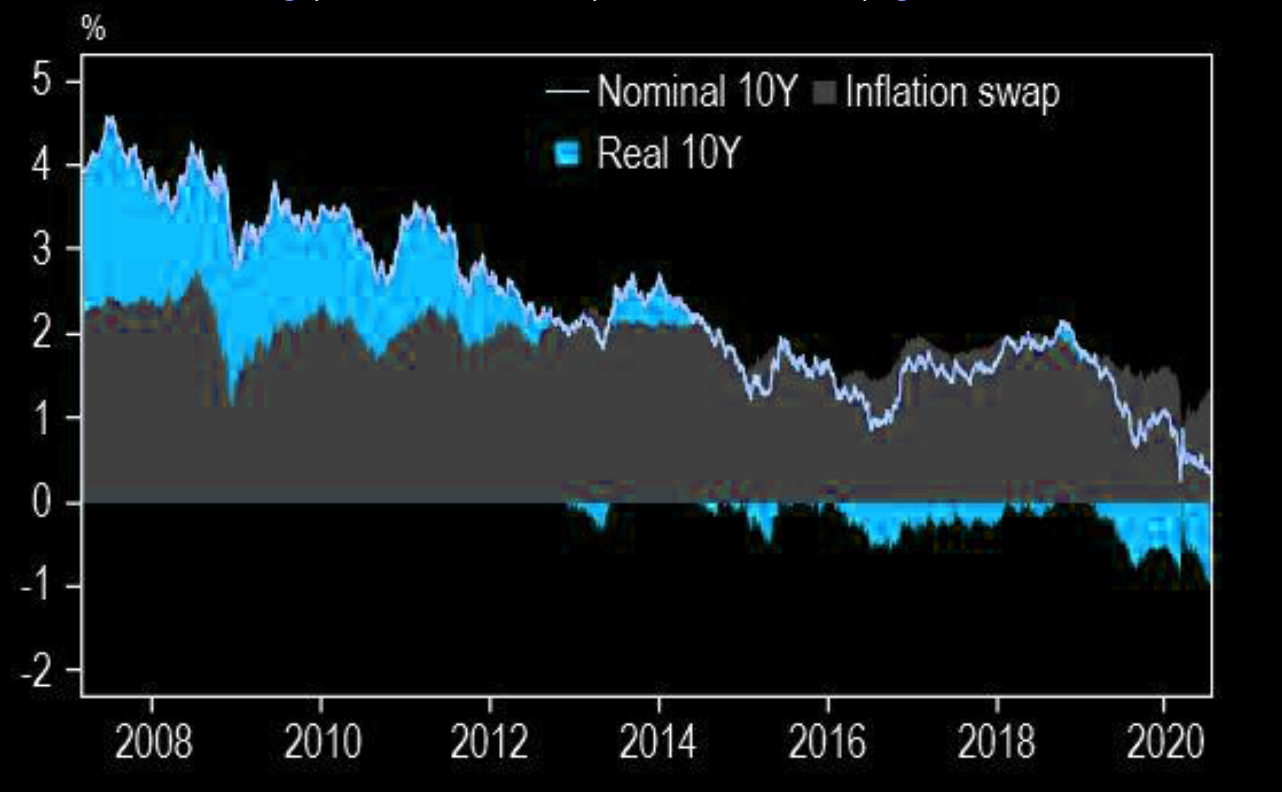 Read the prediction of Carter Worth, resident technician at CNBC Options Action on Friday evening:

Then you have Priya Misra of TD Securities making the opposite call of Charlie McElligott on Friday on Bloomberg Real Yield: (Is that show is really back?). Ms. Misra is getting incrementally bullish on Treasuries now. Why? Due to rising covid risks, increasing political risk & positive seasonals, she said. She thinks her old trading range of 60-80 bps for the 10-year yield is too high.

Remember Bob Michele, head of JPMorgan Fixed Income Asset Management, the man who was among the early ones to predict in 1989 that the US 10-year Treasury yield would go to 1%. What did he say this week to BTV’s Jonathan Ferro?

This was yet another week in which Treasury rates refused to go up despite the rally in stocks, even small cap stocks. But then Treasury yields haven’t gone up during the past three & half months, despite one of the greatest rallies in the S&P. 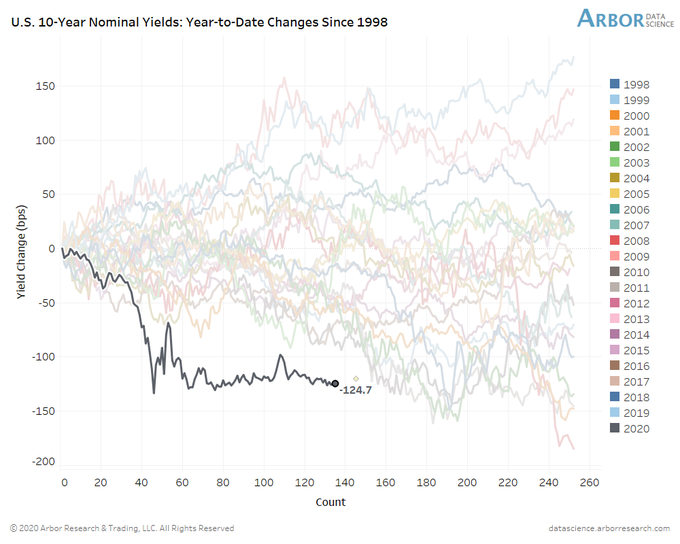 That brings up the big question:

Any message from Bond Volatility? Buy it says one guru: 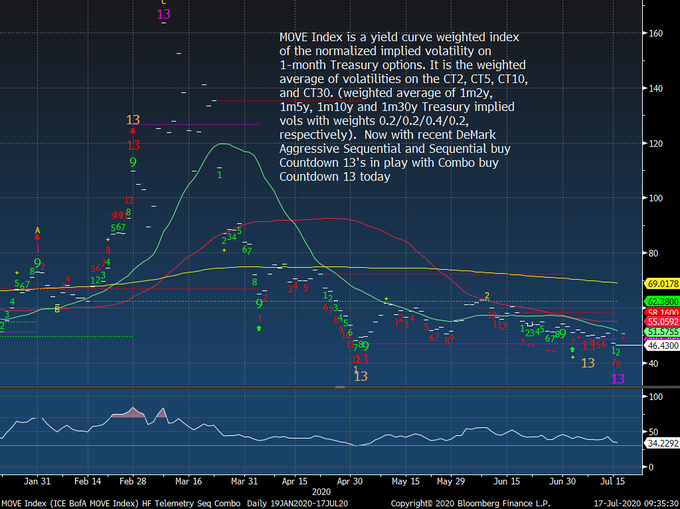 The big move this week was the NDX falling in 1.8% on the week while the Russell 2000 rising 3.5%. Secular growth darlings like Amazon & Microsoft were hammered down 7.6% & 5.1% resp after they moved the NDX to a new high on Monday morning. Apres that,

Another smart observer points to March 2000:
But to their credit, they also pointed out the only other week when the above happened:

So the key question is whether the 2020 Powell Fed is on a track to increase their balance sheet & market liquidity or on track to reducing it. Almost a rhetorical question, right?

Remember MC/FB, our measure of valuation for secular growth cloud companies? MC/FB stands for  Market Cap to Fed Balance Sheet ratio. When did the S&P hit its peak? Second week of June. And when did the Fed’s balance sheet stop growing? Mid-June. However, Amazon, Microsoft et al exploded to a new leg higher from mid-June until this Monday leading their MC/FB to an extended level.

Remember the old dictum that revisions to earnings estimates are a better predictor of stock prices than reported earnings? Does that apply to analyst estimates of Fed’s Balance Sheet size too? A better way to consider the 2nd point made in the above tweet: 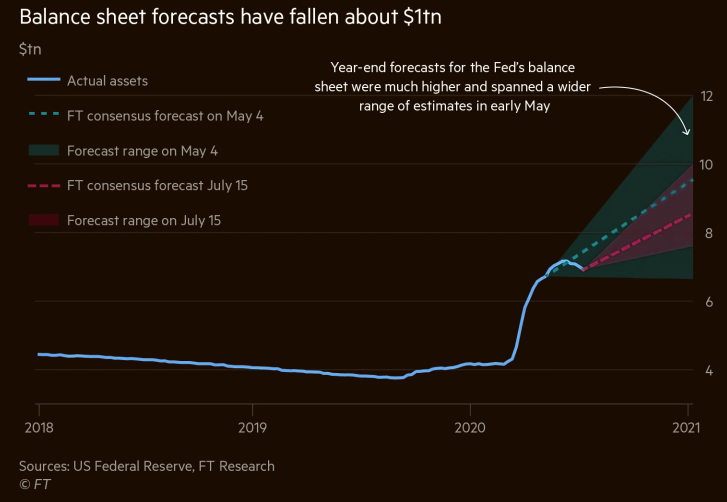 So what happens going forward may depend on what the Fed does with its balance sheet & whether Treasuries rally. Why the second? Read what Charlie McElligott also said in his podcast on Macro Voices:

So what if Bob Michele & Priya Misra are correct and the 10-year Treasury yield starts going down instead of up as Charlie McElligott felt? Bob Michele also said on BTV that “we are seeing an acceleration in digital transformation in US & the global economy” and that they are trying to find suppliers to the digital space for adding to risk positions.

So if the estimates for year-end Fed balance sheet go back to $10 trillion (Dudley’s figure in his BTV comments)from today’s $8.5 trillion figure and if US 10-year yields break decisively below 60 bps, could Amazon, Microsoft et al rally? Better answered after their earnings next week & the week later, right?

Come Monday morning, we should get results from AstraZeneca & Oxford University about their phase 3 human trials of their CoronaVirus vaccine. That could the biggest impetus for the S&P on Monday.

He added that “Lots of Volatility selling in size lots today for August mainly“.
That would be consistent with the 3346-3348 prediction for SPX from the legendary Larry Williams via Jim Cramer:

Mr. Williams expects the S&P to get to a new high or almost a new high by July 27 & then presumably decline. Do note that the original clip of Cramer was over 9 minutes long but that clip is behind CNBC’s firewall. So is this 2:26 minute extract a true & complete description of the views of Larry Williams? We don’t know. But we felt it was important to point out that the clip we highlight above may be not entirely accurate. It is certainly not complete.

Whichever way the S&P breaks could signal “a strong directional move“, according to Lawrence McMillan of Option Strategist:

The U.S. Dollar closed down 70 bps this week. Is this ready for a breakdown or a short-covering rally? 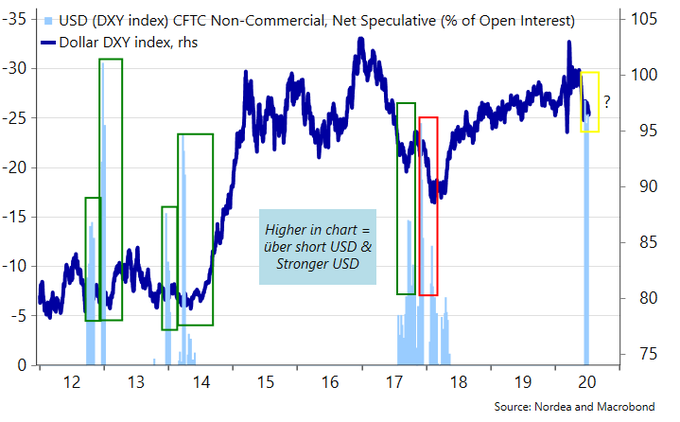 On the other hand, J.C.Parets believes the opposite: 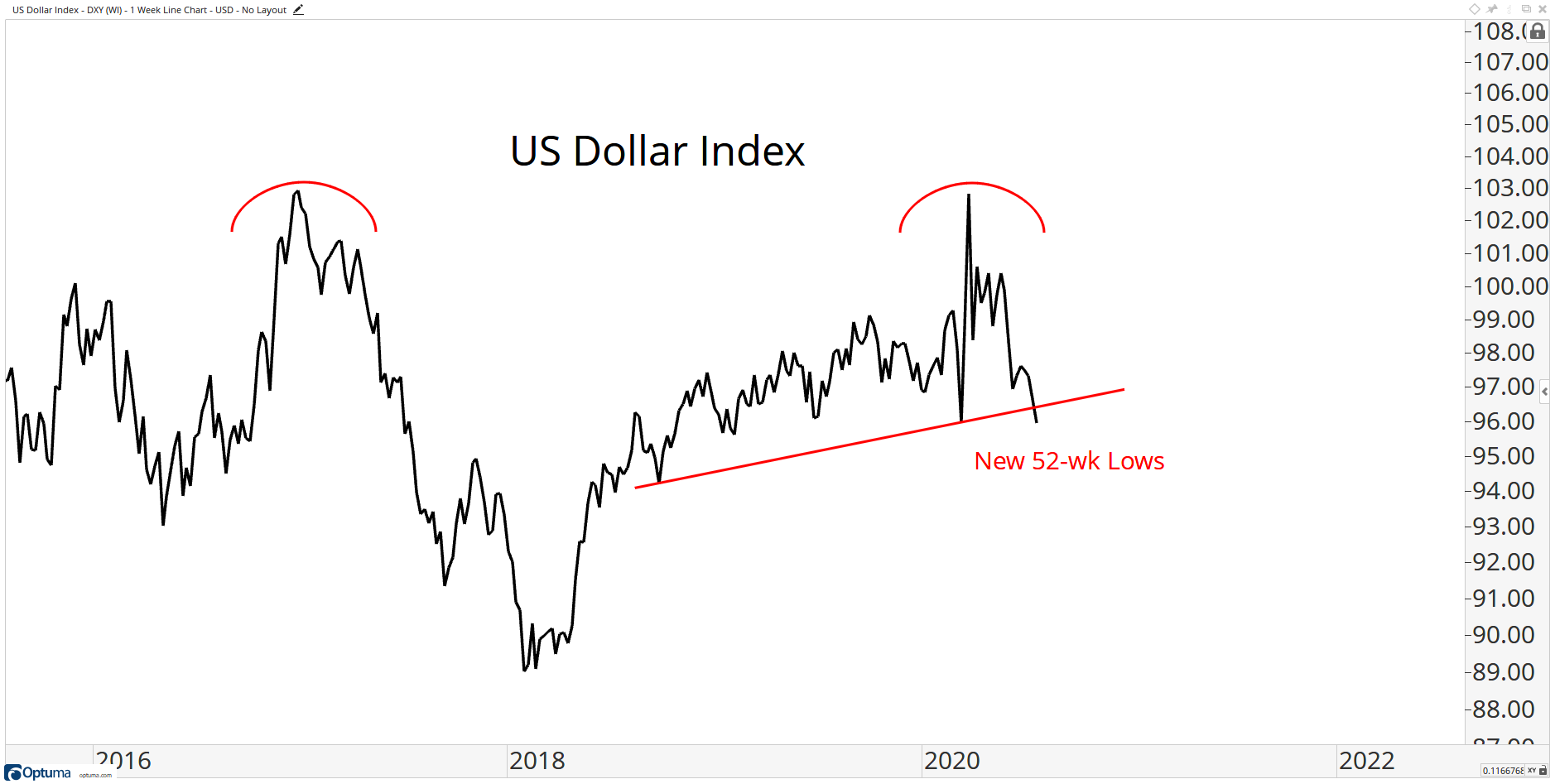 Carter Worth recommended buying the Materials sector of the S&P via the ETF XLB on Friday.

Some argue that Gold represents much more than being a part of the materials complex. 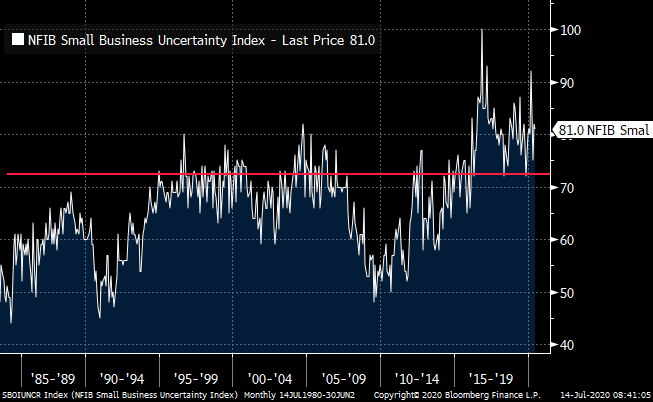