That could simply be the story of the next three months & three days. Since 2016, we have postulated that Trump will be in the perfect position to be this depression’s FDR & thereby win a second term. That was Trump in March-April & the stimulus he drove the Democrats to approve has been the story of the past 4 & half months.

Perhaps Rosenberg should have used the phrase “Governments meeting their sworn obligation to take care of the needy” instead of “Gov’t handouts“.  Hardly anyone thought then that the US Economy would be in the same predicament in August as in April. But it is. So it is absolutely necessary to have another massive stimulus injected into the economy, even a bigger version but not a smaller version.

That is what FDR Trump has to champion and he seems to want to. But to our intense chagrin & near disgust, Senate Republicans seem stupidly & insanely committed to pre-FDR type plan, otherwise known as Hoover II. These are the same yahoos who didn’t believe Trump was going to win in 2016 and they don’t believe Trump will win in November. So they are responding with blind obedience to traditional Republican donors.

Even a man who dislikes Mr. Trump gets it. As Rosie wrote in his Financial Post article,

This fiscal drag is what President Obama delivered in 2013 after winning his second term. That took down the trajectory of that recovery but at least Obama did it after he won re-election. These caricatures of the old fat cat country club Republicans seem intent on doing this before the November election. Being born & bred big city urban, we have never even seen a pitchfork but we want a couple to go show them to McConnell & company.

And where is MW* Kudlow we ask? If he can whisper to markets, why can’t he whisper to McConnell & company? Didn’t he hear Jay Powell literally beg for a big fiscal stimulus on Wednesday?

This Wednesday we wrote down prices & levels at about 1:50 pm, 10 minutes before the release of FOMC statement. And we compared those prices/levels to Friday’s close as we do on all FOMC weeks. It provides an overview of what FOMC statement & Powell presser impacted.

So what market or sector did Powell impact with his statement & presser? Nothing. Rates continued to fall hard, Dollar did nothing, Gold kept rallying and stocks rallied small except the FAA trio & QQQ. McConnell didn’t even hear his plea for fiscal relief.

But did the total lack of market response in itself suggest something to some participants, at least tactically if not strategically? 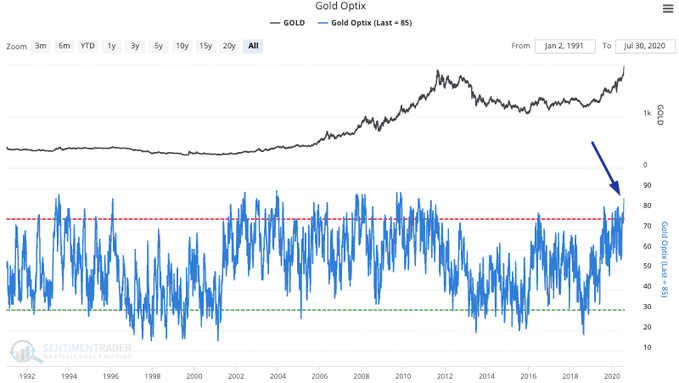 And look what Jim Cramer featured on his show the day before the Fed – a bearish view of Gold from his colleague Carley Garner. She thinks that there might be one last gasp rally in Gold before it rolls over & perhaps not even that if Dollar stabilizes. Listen to Cramer explain her views & charts:

Then on Friday, Carter Worth of CNBC Options Action, the man who coined the “rates to zero & gold to infinity” line suggested, tactically speaking, that gold is “getting a bit crowded“.

But if gold is taking a detour from its road to infinity, what about rates, gold’s fellow traveler in the “zero-infinity” journey? Mr. Worth did not say but someone else drew a picture that does seem worth lots of words: 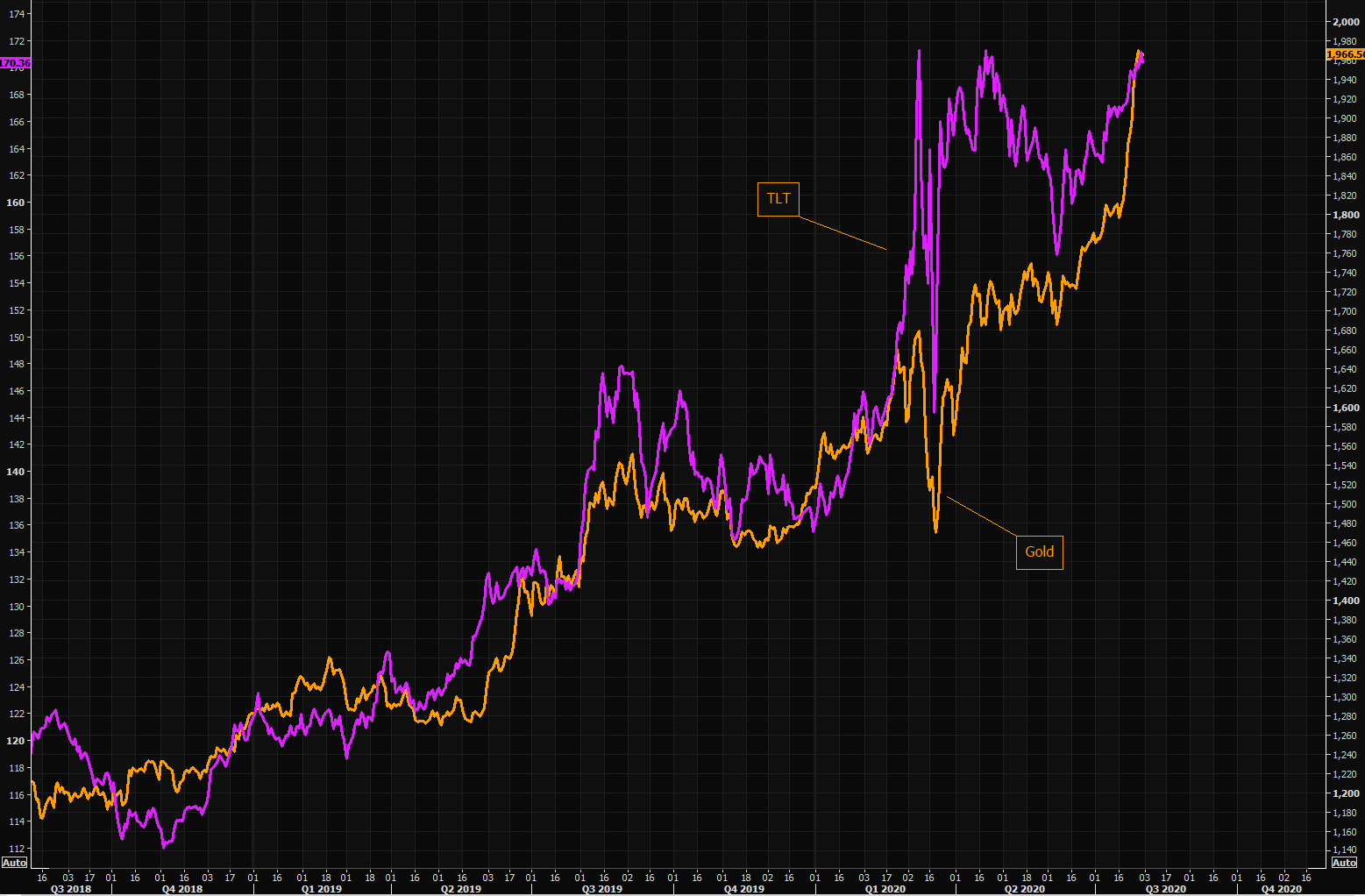 TLT did not get to a new all-time high but the 10-year yield did reach a new all-time low on Friday. Is that because, as JPM’s Bob Michele told CNBC’s Kelly Evans, that money is pouring into Treasuries from the rest of the world or is the reason something more malignant?

Wasn’t that Hoover’s contribution to America? Who will explain that to McConnell? Not only did the new 20-year Treasury close below 1% at 98 bps but the German 30-year yield closed below zero at minus 11 bps.

And remember what deflation of 1930s did to banks? That history seems to be rhyming in the UK today: 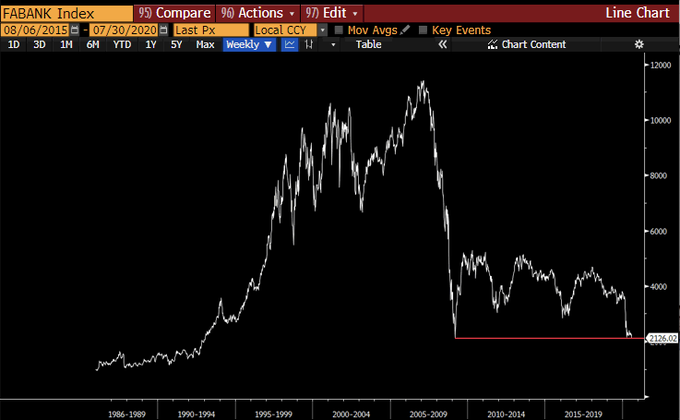 Morgan Stanley’s Mike Wilson said on BTV that the current consolidation in the stock market will end with the passage of the fiscal stimulus bill. With that he thinks next year will take the curtain off the leverage being built in operating margins of companies. That is why he thinks a new economic expansion will be begin as it did in 2009, 2003 & 1990-1991 and then the equal-weight S&P will outperform the S&P 500.

So was that move real or was it merely month-end? Perhaps we don’t see it because the above are bars & not candles.