What did he take away? Just about everything except Cleveland Cliffs (CLF), Freeport (FCX), China ETFs & that genre. We heard CNBC Anchors talk about the weekly performance of indices & asset classes as if the week was a steady week without any material inflection point. Perhaps they should have look at the 5-day charts:

The anchors talked about Russell 2000 as being the only index to close up & that too up 2.7% while they derided QQQ for falling 1.4% on the week. They didn’t notice that both indices showed similar behavior until 2:00 pm on Wednesday. Both IWM & QQQ were up strongly, up 4.3% & 2.3% resp., until that time. Then both began selling off until Friday’s close with QQQ falling 3.6% & IWM falling 1.5% from Wednesday 2:00 pm. This was true of almost all indices & asset classes from Wednesday 2:00 pm into Friday’s close:

This isn’t new. It was after the June 10 FOMC that we titled our first section as “He Giveth & Taketh Away“. Why do we bring up the June 10 FOMC meeting? Look at our favorite indicator to measure Fed’s liquidity getting realized in markets, the indicator being outperformance-underperformance of DPG, a leveraged credit Closed-end fund, vs. HYG, the unleveraged high yield ETF:

As you can see, DPG began outperforming HYG from Thursday, March 19 into the FOMC meeting on June 10 and then began an under-performing cycle that began accelerating since the July 29 FOMC meeting. By the way, DPG fell by 2.4% from this Wednesday 2:00 pm into Friday’s close.

The message is clear that the Fed is not adding to liquidity & is actually contracting it. That is why we just don’t understand why even our favorite gurus saw Powell’s presser so differently from us:

Bernstein’s “The Fed has clearly lost its way” comment is true given how markets reacted but we are sure he didn’t mean it that way. And his “millionaires in Silicon Valley” must be the insiders as CLF, FCX & Mosaic after the carnage in QQQ in the last two weeks. We jest of course but doesn’t he see that the Fed is actually  decreasing liquidity? His ex-colleague was not even as polite as him:

The most sensible comment & the one that matches the message of our charts above came from Larry McDonald of Bear Traps Report a day later on CNBC Fast Money:

Before we get to the second part of his clip, we remind readers of our MC/FB measure, the ratio of Market Cap to Fed’s Balance Sheet size. A Fed that was driving an accelerating balance sheet was very bullish for the Cloud crowd, the companies without any risk to their growth paths. Conversely, a Fed that has stalled or even stopped the growth of its balance sheet is a negative for these stocks despite their superb earnings performance. This is why we have begun seeing that stocks like ADBE have fallen by over 5% despite posting great numbers. Their MC/FB valuations have factored in higher balance sheet size & when the Fed disappointed, these stocks got clobbered.

Does this make stocks like Amazon attractive to what they call “smart money? Yes, says a smart guy himself: 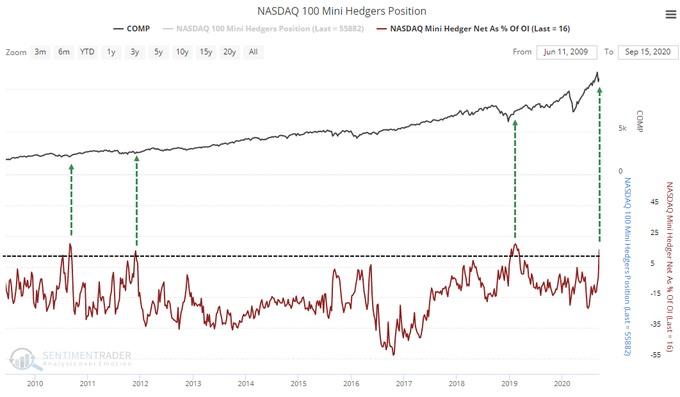 Is there a chart that suggests the same because of symmetry of QQQ/IWM moves?

What is the one market indicator that hardly reacted to Powell’s presser? VIX. That means the September 4 buy signal from VIX “spike peak” remains valid:

Hmm; Is there a trade that, if successful, gives you $5 in gains in two weeks at the risk of losing only 30 cents?

What is the second part of Larry McDonald’s message on CNBC Fast Money? A fall of 20% in QQQ from the high and a massive migration over next 12 months into commodity stocks like Teck Resources & Mosaic. He correctly points out that tech stocks represent a massive deflationary bet that has worked for ten years. That ends soon or next year with a cycle that rewards commodity stocks that win because of inflation.

That is also the message of Morgan Stanley’s Mike Wilson who expects a “non-linear” move in interest rates at some point, perhaps after the November election into 2021.

But isn’t Powell’s refusal to increase the balance sheet an obstacle for such a “non-linear” up move in rates? Because a semi-hawkish Fed that has put the brakes on liquidity addition is a Fed that is nudging long duration rates lower, right? That seems to be the message of a decidedly anti-Rosie David Rosenberg:

Remember the man who scandalized many by calling for a 1% yield in 10-year Treasury? That man, Bob Michele of JPMorgan Fixed Income has a message that sounds different from the message of Larry McDonald above:

What is the story with the $5 trillion in money market funds? Michele answers:

If Treasury yields remain low & even drift lower and if US credit keeps its strength and the economy begins to cool off, could that massive migration into commodity/inflation stocks get postponed to 2022? If all this happens, will QQQ & the Cloud cohort keep getting sold?

Will Chairman Powell actually bring this about by his stubborn refusal to keep expanding the Fed’s balance sheet? And could his desire/mission to quell the momentum in cloud & tech stocks actually lead to a bigger tech bubble in 2021? That would actually fit with his mistake in October 2018, right?

No, we don’t mean Walmart’s US rollout of a annual subscription a la Amazon’s Prime. We mean the fear that Amazon & Walmart-Flipkart had of Reliance Retail entering the e-Retail market in India by connecting  mom-pop stores with online customers via Reliance’s JioMart product. The Reliance-Facebook partnership is is expected to bring JioMart to Whatsapp’s more than 400 million users in India, according to the Wall Street Journal.

In a weird but completely logical turn, Mr. Mukesh Ambani is reportedly offering for $20 billion a 40% stake in Reliance Retail Ventures to Amazon. Silver Lake is already on board with a $1 billion investment for 1.75% of the retail company and KKR is also reportedly coming on board. The interest is rumored to be so high that Carlyle & others are out on hold. Will Amazon accept?

Remember our derogatory or semi-contemptuous term BrIndian for Brit-influenced Indians? Mukesh Ambani is certainly not. He gets the Indian consumer, yes the non-Apple consumer who wants inexpensive products that work. Ambani made a huge bet by launching his inexpensive mobile Jio phones with enough data for $2 a month. Global telecom companies laughed at the offering but Indian consumers loved it. Now Jio is the dominant phone company in India and no product can be launched in India without Jio. That is why just about every top-tier US investor has invested in Jio & the company is now worth $65 billion.

This goes back to our 10-year old thesis – Poverty – A Formidable Competitive Advantage, A Barrier To Entry Or Both? But as Mukesh Ambani has demonstrated, you need core Indians to make such inexpensive mass product ventures succeed. Global companies that recruit English-educated or BrIndian talent tend to fail.

The geopolitical event of the week was the “Abraham” accord signed in the White House: 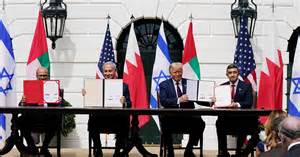 Quiet unheralded cooperation has been on for a couple of years but a publicly heralded peace & economic accord. Wow is all we need to say.

Many have heard of Abraham’s wife Sarah or Sara in more modern usage. Most also know that David & Daoud are Jewish & Arabic names after the legendary warrior & slayer of Goliath. Some say that Sara & Saira are Jewish & Arabic names after Abraham’s wife. Call it coincidentalism or synchronicity, this week also featured a joint discussion between CNBC’s Sara Eisen & Nuveen’s Saira Malik.

The names Sara & Saira might come from the same name but they are pronounced differently. And we noticed Sara Eisen pronounce Ms. Malik’s name as Sara instead of Saira. A case of religious appropriation?  Because the Sara here is Jewish (we guess) and the Saira here is Muslim (we guess).

That brought to mind one of the most famous cult-like songs of the past 40 years, a song that features an arrogantly beautiful Saira. From what we have read, there are two schools of thought about wooing an arrogantly beautiful woman. The traditional one suggests the man should praise her to the hilt & follow her every wish. The non-traditional one is for the man to mock her, mock her until she gets crazy angry, the anger being evidence of her attraction for the man. This second way formed the basis of Louis L’Amour’s Rivers West classic. And it was extended in the cult song below to a competition between two admirers, the praising kind & the mocking kind.

How angry does an arrogantly beautiful woman get at her admirer when he loses? Watch the last 50 seconds of the clip. Made in 1968, the film “Padosan” is ever-green.