Last week we wondered whether the rise in long maturity interest rates would slow down or reverse given the huge short positions in 30-yr Treasury futures. We also wondered whether such a reversal in rates would also reverse the outperformance of Russell 2000 small cap ETF over QQQ, the Nasdaq 100 ETF.

Is that consistent with the economic data? 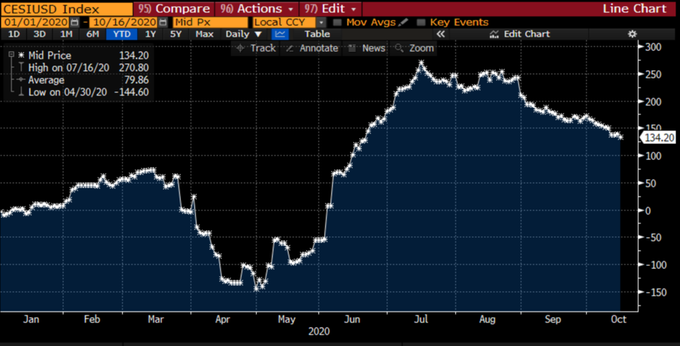 Remember what happened in June? The Fed stopped expanding their balance sheet. Perhaps they will resume what they were doing as they see charts like the one above.

But which parts of the economic index are slowing down? 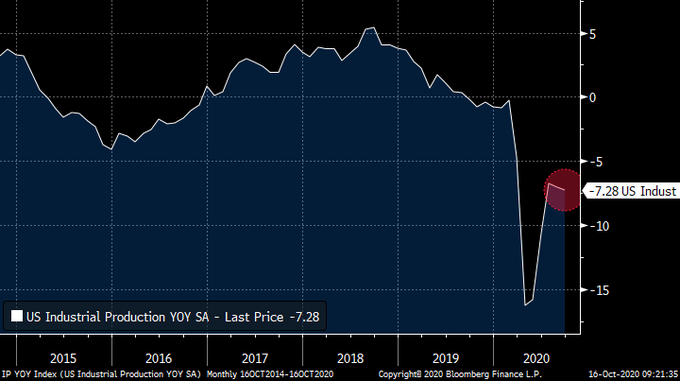 What is one way of looking at Friday’s strong Retail Sales report?

But can retail sales be strong without money? 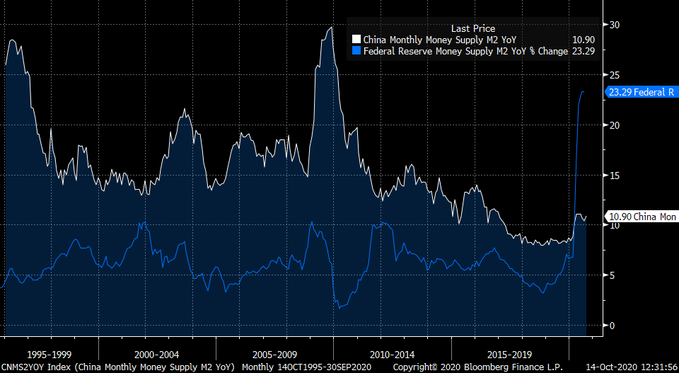 Does that mean some are picking “V” in the economic recovery alphabet game? 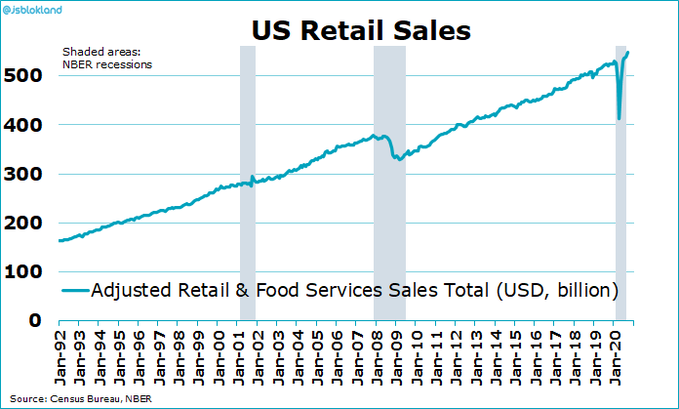 What about the impulse? No, not your impulse to throttle the Town Hall anchor you disapprove of. We mean The Impulse: 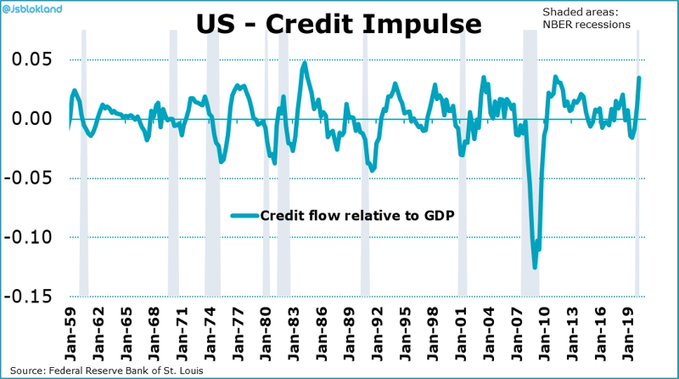 The money supply explosion does raise the other two-handed question.

On the other hand, Lakshman Achuthan, the guru who predicted that the 2020 recession will be the shortest recession, said this week that inflation has “made a very clear cyclical upturn“. He added:

And he thinks the “recovery is on stable footing for at least a couple of months”:

So what does that do to interest rates at the long end of the curve? The CNBC Options Action guys said buy puts on TLT with their resident technician saying the TLT chart has “all the hallmarks of not bottoming out but of topping out“:

How does one define the subject “of ” above? 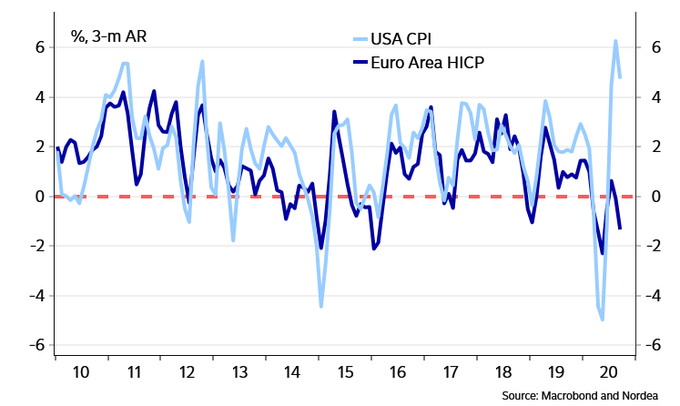 We know what the Fed has done and will keep doing to ward off deflation in the US. What about the ECB? 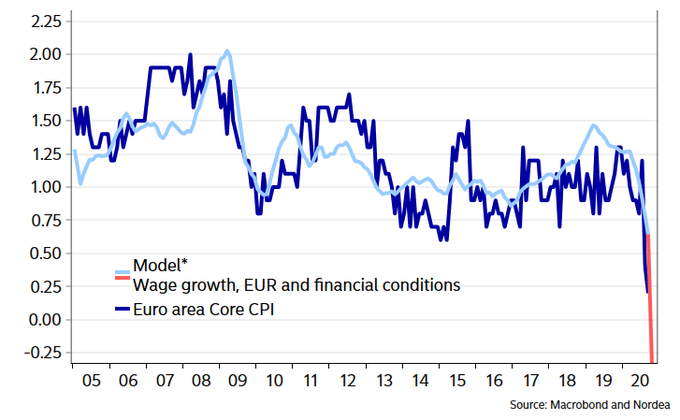 What is another indicator of Euro deflation? 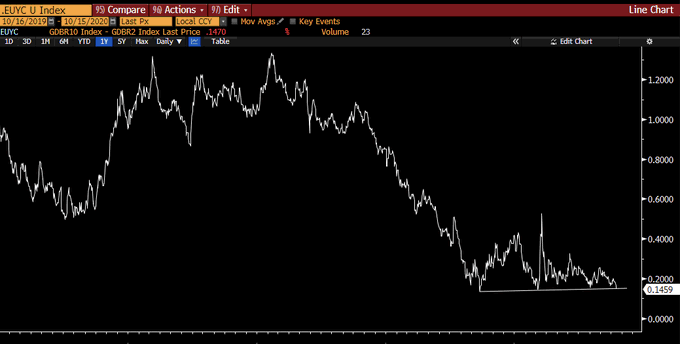 Remember the tweets about short positions in equity index futures that correctly predicted the rally we have seen for the past 3 weeks. What is the status now? 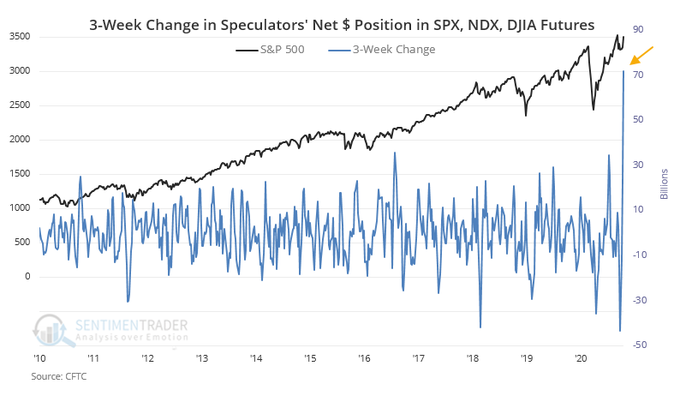 That does not sound bullish at all. And the Fear-Greed index is now at 62 indicating a shade of greed but not extreme greed. So is it possible that we get one last higher leg before the rally runs out of steam? Tom DeMark thinks so according to Jim Cramer:

Tom DeMark thinks there is one leg higher left & if that hits the 13-count then we could see a correction. He also thinks that would give his indicators just enough time to turn bullish and identify a bottom just before the election. Tuesday’s clip above suggests that the 13-count would be hit if the Dow rallied. But the Dow did not rally to hit DeMark’s upside target. So is the previous 10-11 count cancelled or just postponed? This makes us ask again why DeMark doesn’t wait until the 13-count is hit and then call for a fall?

We recall that Larry Williams had also told Jim Cramer to expect a major low around October 20, a low that should be bought. So if either of these two luminaries prove right, then next week should prove quite interesting.

But what about the intermediate term? 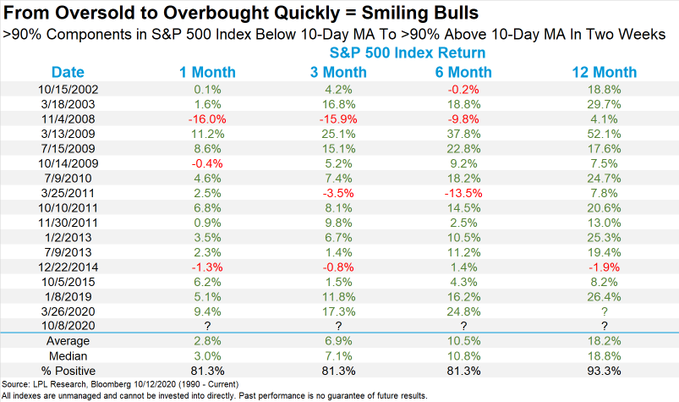 Lawrence McMillan thinks similarly but is also concerned about the behavior of VIX:

So what might one watch to get a signal of the next big movement? 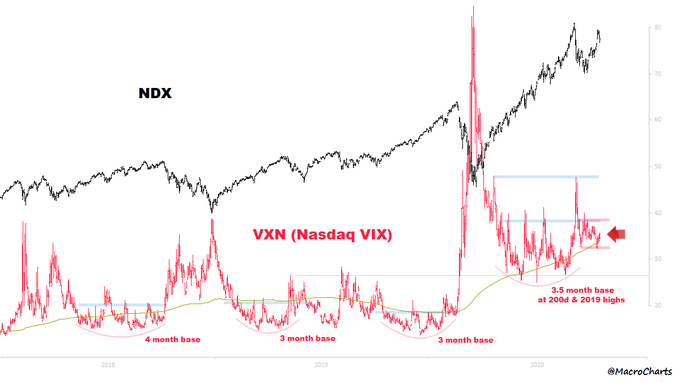 Several years ago, Howie Long & Terry Bradshaw had on-air trouble pronouncing the African name of one NFL player. They thought it was funny and made a joke of it. But that was the last time they did it. Now watch that TV show, or any football show for that matter, and you will see how precise broadcasters are in  pronouncing African names.

We have tremendous admiration for what African-Americans have achieved in getting their names, their heritage respected by American media. And we feel sad and actually humiliated at the cavalierly derogatory treatment of Asian-American names by Financial TV, especially by CNBC’s on-air “talent”.

Take the name Arabic name Malik. College Football broadcasters say that name perfectly as we noticed in a recent Louisville game (Louisville QB is Malik Cunningham). And Malik is now quite common among African-Americans. Just look at  https://www.famousbirthdays.com/names/malik.html.

In contrast, Fin TV hosts don’t seem to have heard of this common name as CNBC’s Sara Eisen demonstrated a month ago while interviewing a guest named Saira Malik. She has not done so after that, to our knowledge. Even she probably realizes that mispronouncing common African-American names is not good for her career’s health.

But Ms. Eisen, and her co-anchor British Wilf Frost, keep mispronouncing Arabian-Asian name “Saira” as Judeo-Christian “Sara”, not just accidentally but deliberately & seemingly with joy. These two millionaire TV hosts are not dumb. So our guess is that Ms. Malik has permitted them to call her “Sara”. It is also likely that Ms. Malik herself uses “Sara” as the pronunciation of her “Saira” name, perhaps to fit in to the virtually all-white world of investment management.

If the latter is true, it demonstrates again how African-Americans have leapt ahead of Asian-MiddleEastern Americans is demanding respect for their cultural & racial heritage. We feel this strongly because we have seen prominent Indian-American professors & investment luminaries allow white CNBC anchors to butcher their names on-air, not just cultural names like “Saira”, but sacrosanct religious names. That is because they are so desperate to get on white CNBC TV that they don’t mind their religion & cultural heritage trampled. And CNBC anchors have obliged them with enthusiasm as we have pointed out for the past 12 years.

We would think CNBC anchors like Eisen-Frost could protect their network & themselves from social excoriation by simply asking on-air guests like Ms. Malik “you prefer to be called Sara instead of Saira, right?” Just a simple on-air question like that would not only absolve CNBC & the anchors from criticism but it would also let them demonstrate that they are sensitive to cultural-religious appropriation.

So why don’t they do that? Our own guess, supported by watching 12 years of such behavior by CNBC Anchors, is that such cultural-religious supremacism is an integral part of CNBC as a network. Let us point out that only CNBC exhibits such behavior. We don’t see such anchor behavior on Bloomberg TV or on Fox Business. We also feel certain that if any such behavior is brought to the attention of Mr. Bloomberg or the heads of Fox Business, they would take action. But CNBC Management has never taken any action to our knowledge. That is why there has been a series of CNBC Anchors (almost all women strangely) who have knowingly, deliberately & gleefully mispronounced Indian names, now an Arabic name.

By the way, “Saira” is such a common name that there is a 49-second You Tube clip by www.PronounceNames.com that shows that “Saira” is pronounced as Sigh-Ra.

The clip begins with the following quote from Dale Carnegie:

We feel sure that Ms. Sara Eisen would never allow any one to call her “Saira”. But she has no qualms in using her own sweet “Sara” name for “Saira”.

But Sara Eisen obviously doesn’t even care to know that and, far more sadly, it appears that Ms. Saira Malik doesn’t feel proud enough of her “Saira” name. Why else would she permit CNBC’s Eisen-Frost team to almost gleefully call her Sara.

Speaking of Saira Banu, watch one of the most famous songs picturizing her. Hopefully at least one of the “Indian”-origin reporters of CNBC have heard of the gem below.

By the way, one of the early acquisitions of Amazon was a 1996 silicon valley start up named Junglee.com, named after the 1961 cult film “Junglee” which proved to be a breakout film for both Shammi Kapoor & Saira Banu.

Speaking of the film “Junglee”, how many know that the company Yahoo was named so by founder Jerry Yang because he was a fan of Shammi Kapoor and the “yahoo” song below?

In fact, according to BBC.com, when Yahoo opened its Mumbai office, Jerry Yang invited Shammi Kapoor as the Chief Guest and told him why Yahoo was named so.

Going back to our opening words of admiration for African-Americans, how we wish “Saira” was a common African-American name like “Malik”? Then CNBC’s Sara Eisen & Wilf Frost would not dare to pronounce it as Sara in an act of blatant cultural appropriation.