GZero Media, a unit of Ian Bremmer’s Eurasia group, recently put out a list of leaders/countries that would prefer a Biden win over Trump & conversely. In that list, the most prominent anti-Trump region was Western Europe and in their forefront was Bremmer’s favorite leader, Angela Merkel. In the intra-EU conflict between Eastern Europe & Western Europe, Eastern Europe has been a fervent Trump supporter while Western Europe led by Merkel has been intensely anti-Trump. All her deeply- believed policies, such as welcoming refugees & immigrants from Africa, pursuit of trade with China & climate change, are intensely opposed by Trump.

So no other G7-leader has as much invested in a Biden win over Trump. And Biden has publicly stated that he will restore old USA policies that are favored by Merkel. That leads us to wonder whether Merkel’s stunning & sudden announcement on Wednesday morning (about 3:30 am NY Times) of a lockdown in Germany beginning on November 4, the day after the US election, was intended to cause a market fall. The CoronaVirus spread in Europe has been in the news for the last 3 weeks or so. Why didn’t she announce this decision a week ago or on November 4, the day after the election?

Her sudden decision rocked all global markets, especially the US stock market. The Dow was down 957 points & the close was horrendous. The S&P broke through the 100-day. And the steep fall focused attention on the CoronaVirus & whether it could come back across America. Yes, Germany’s DAX also fell 9% on the week. But Merkel would happily trade even a 20% weekly DAX loss for a Biden win.

That brings us to the chart below from Ned Davis Research: 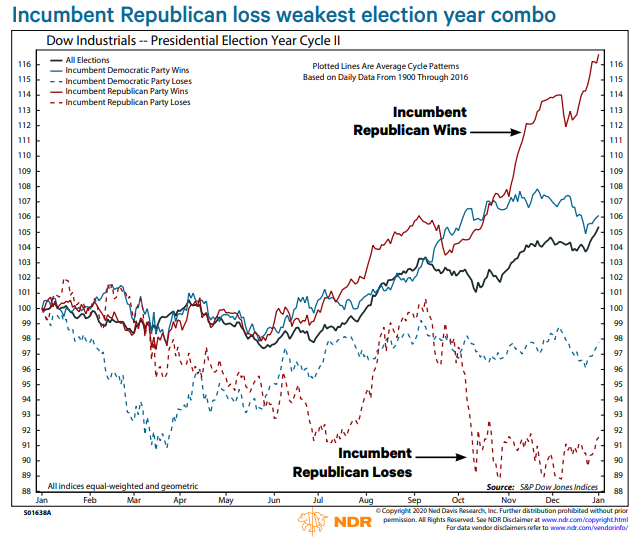 The DC in the title are Tom DeMark, the originator, and Jim Cramer, the communicator, of a spectacular call (half-call actually)  made two weeks ago:

The first half of the DeMark call was for a sharp decline over the next two weeks from Friday, October 16 & that has come through in terrific fashion (remember terrific is etymologically derived from terror). So now what? That brings us to the second half of DeMark’s call above (from 2:56 onwards in the above clip):

Does that mean buy S&P calls on Monday or Tuesday? DeMark is renowned for specificity. But, unfortunately, neither of them were that specific in this clip.

Last week we featured charts showing heavy put activity in the VIX & how hardly any one was hedging for a VIX explosion. Well, the VIX did shoot up by 35% this week. But is that too high given the U.S. economy is in a business cycle expansion, as ECRI pointed out a couple of week ago? 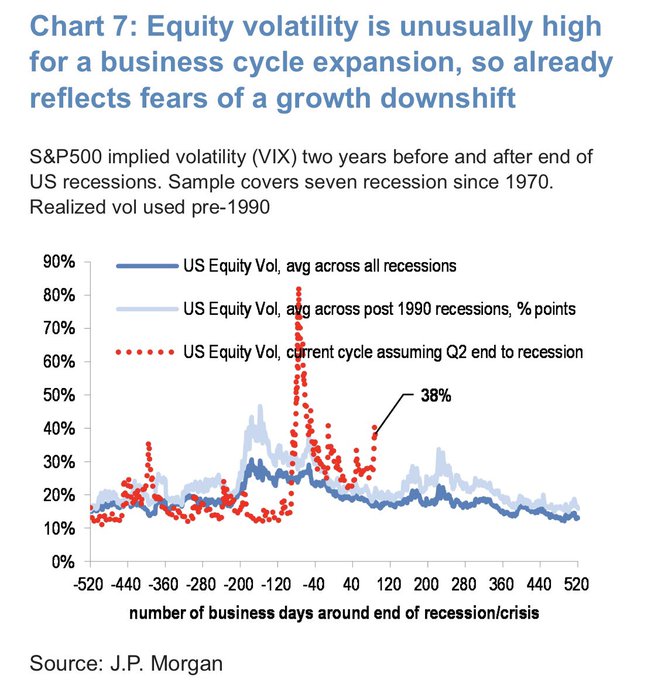 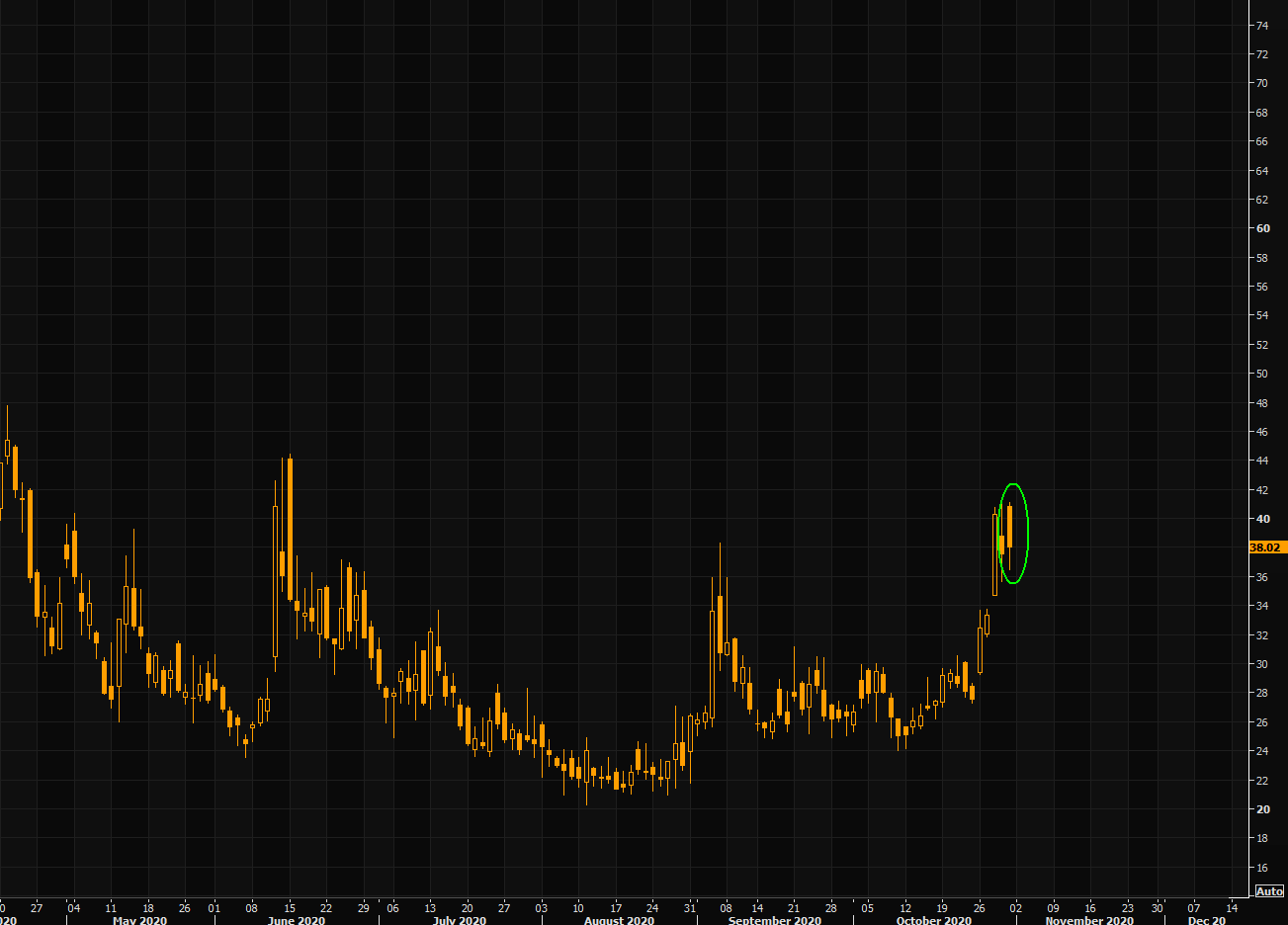 To put it another way, how intense was the selling pressure? 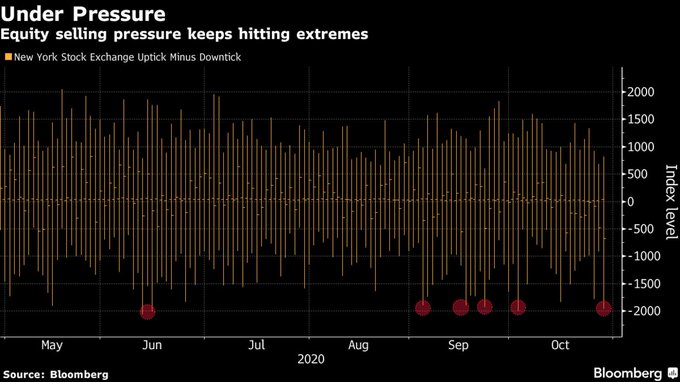 Look TICK did get close to the record set in June 2020. But are the smartest buyers pulling the trigger? 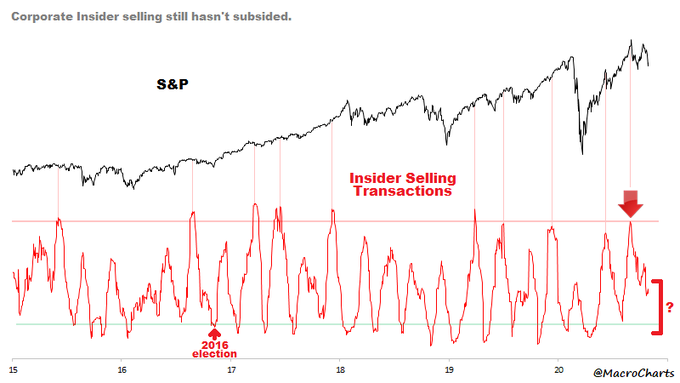 Whose batting average has been the highest this year? Mike Wilson of Morgan Stanley. Last week, he warned of a month-long correction down to 3,100 on the S&P.  This Friday Carter Worth, resident technician of CNBC Options Action, took it down to 2870 & then to 2725.  Perhaps, because Carter Worth sees a double top while Mike Wilson only looked at a single resistance point last week.

Clearly today’s PE is very high as a standalone measure. But is it still high speaking relatively? 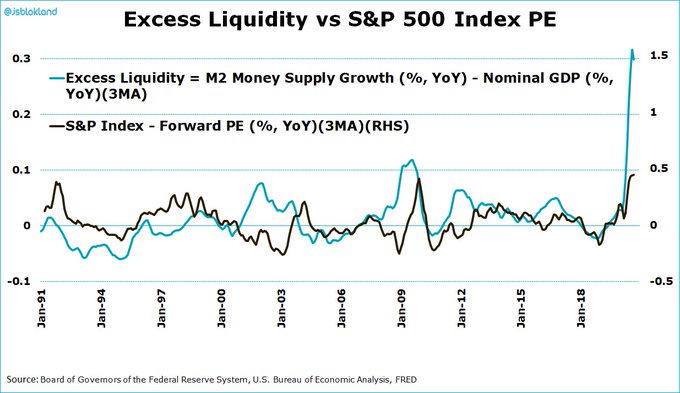 But what  about the Numero Uno factor? That was ruled out last weekend and look what happened this week. Yes, Merkel probably accounted for Wednesday but what about Monday? Yes, the positioning was all to the long side of the boat. But wasn’t the death of the stimulus possibility a factor too? We think so.

The stimulus was deemed a given with the expected Blue Wave of Democrats winning Presidency, Senate & keeping the House. What about the Red Wave with President Trump getting re-elected, Republicans taking the House and keeping the Senate? Those who would laugh at this possibility should look at the confidence expressed below by President Trump:

We are not surprised to see this sober confidence from President Trump. We have been aware of this possibility since riots engulfed cities across blue states from the east coast to the west coast. Clearly this is still a long shot given the number of seats Republicans would have to win. But even if GOP gets close to winning back the House, it would change the political landscape of the House.

So with greater support from the House instead of a wall of ferocious emotional conflict, the chances of a Trump-led stimulus bill becomes more likely.  We saw that in the last two days of this week with 30-yr up 8.5 bps, 20-yr up 8.9 bps, 10-yr up 8.5 bps up in yield. 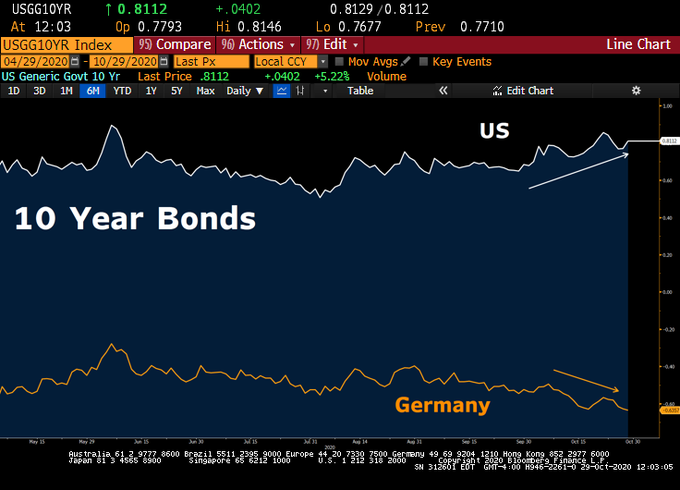 What if Biden is elected President but GOP keeps the Senate? Then we think the GOP will revert back to its preferred economic policy and oppose all attempts to further economic stimulus that increases the debt. And a President Biden will try everything he can to raise taxes. The two together will take us back to the Obama days and create near-deflationary conditions.

Back to Trump, remember it doesn’t take long for a second term President to become a lame duck especially when it comes to challenging the deep beliefs of his own party. So as months pass, it will be more difficult for President Trump to persuade GOP senators to pass a big stimulus bill.

So we see a 3/4 chance for a stimulus bill in the first half of 2021. That is also what the really smart folks are saying:

But before all this come Wednesday November 4 & Thursday November 5. And the Fed will be free of political ramifications of what they say or do. So will they step up to what they need to do?

If Bonds don’t work in & the Dollar doesn’t rally in  a stimulus-probability environment, what is one to do? Carter Worth says Buy Gold miners: