This week, Fin TV anchors began alluding to the reality beneath the exterior of the US economy.

As we wrote last week, David Rosenberg & his now fellow-traveler Jeffrey Gundlach both believe that stimulus now is the most pressing need for America. Rosenberg even thinks there is a 20% decline in the S&P ahead if we let the economy slide into a recession or something closer.

But the S&P is mostly made up of large investment grade companies & they are flush with cash, said Rick Rieder of BlackRock. He reiterated his view that we will get a 5% nominal GDP in 2021.

By his simple math, these large companies will see a 4% free cash flow yield next year while the 10-year is mired in a perennial sub-1% yield. That he calls a “direct injection of enterprise value into companies” for a couple of years.

Rieder readily admits that employment will not come back as quickly as the economy does. Jim Bianco pointed out the impact on 70% of the jobs due to Corona Virus.

Add to that the steadily increasing number of layoffs & job losses that companies are murmuring about and the picture for employment does look bleak. But money managers need not worry too much. China or at least buying from China will soon come into vogue &, as Ashley Tellis of Carnegie said on Indian CNN, Biden will add another 100,000 visas for Indian talent next year.

And the Fed will be aggressive in building up its BS via QE, perhaps to send a loud message to Secretary Mnuchin that they don’t need his lousy $450 billion. In fact, we might hear that in the December 16 meeting. Just in time for a Santa rally into year-end? 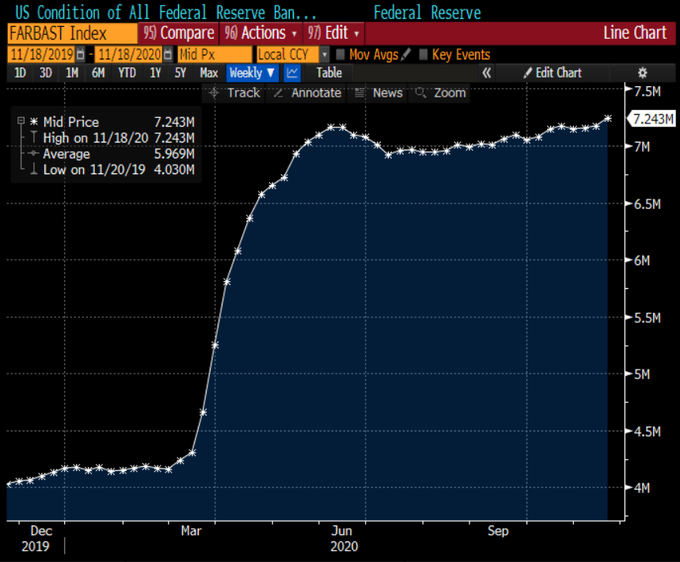 How good will all this be for large companies? First Trump gave them a huge tax-cut. Now Biden, if & when confirmed, will give them the green light to cut jobs in America & ship them to Asia. And oh yes, a mandatory $15 wage will force large employers to replace workers with robots in both out-of-sight warehousing jobs & front office server jobs. Double And, the Fed will take the balance sheet higher & higher. Meaning a triple dose of the direct injection of enterprise value, right?

So are bonds going to have more fun? 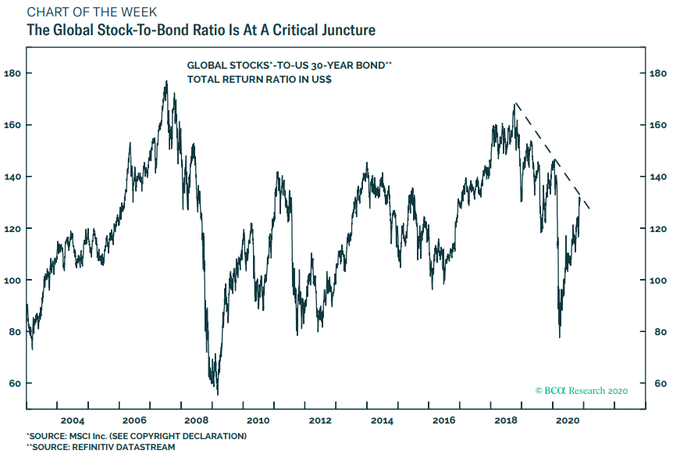 Aren’t falling Treasury yields great for NDX growth hot shots? Did you notice which stocks were up during Friday’s & Thursday’s declines? An example below:

Per Lawrence McMillan of Option Strategist,

Is there a “yeah but” coming? 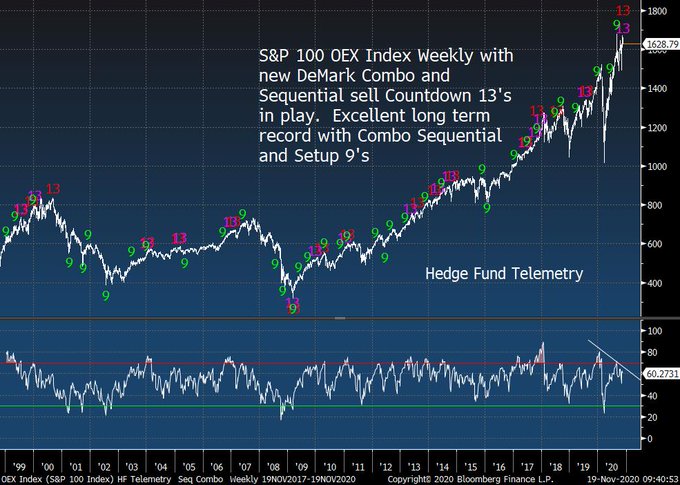 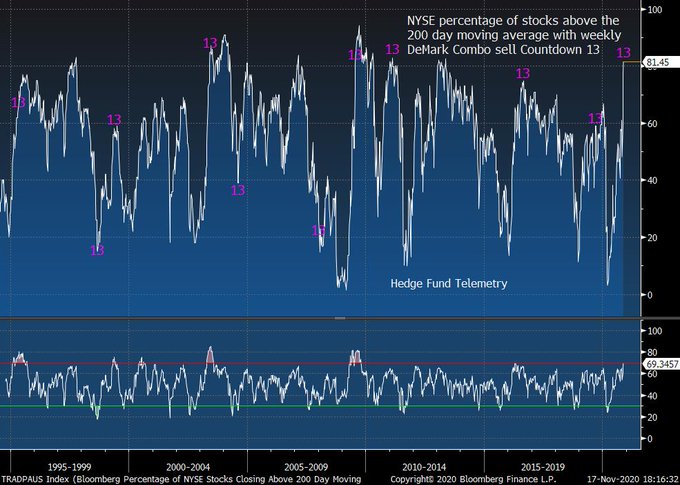 The two messages above are really not contradictory. The DeMark exhaustion signals are supposedly short term. And it is not uncommon for stocks to sell off after Thanksgiving into sometime in December & then rally strong into year-end. And this year we have the S&P’s best friend on deck for December 16.

So Treasury yields are trending down, momentum stocks are again showing relative strength, Chinese recovery is on and  China-US may actually learn to be competitors with some benefits. Which sector could benefit from all this? Does Cramer have a buddy who could shine a light on our question?

The “he” is Bob Lang, founder of ExplosiveOptions.net and a colleague of Cramer. And the sector Lang highlights, per Cramer, is Semiconductor Equipment, still an American preserve. Watch Cramer explain Lang’s argument:

Lang’s message is not that incongruent with this section. For example, Lang suggests, per Cramer, that Lam Research (LRCX) is a buy at $400, down from Friday’s close at $433. Just in time for the DeMark 13 count to work & bring it down to $400 ish in time for the Santa rally? Of course, this is just a “wouldn’t it be terrific” kind of a comment. We don’t predict or even claim to predict because we have no clue.

It’s just that we want to be happy & in a good mood during Thanksgiving and year-end.

You may feel happy or in a good mood when you watch the tender song below from “Zeher”:

“Zeher” is a what we call a Bolly-Holly film. The story and, in fact, the vast majority of shots are copied from the Hollywood film “Out of Time” starring Denzel Washington, Eva Mendes & Sanaa Lathan. Out of Time is a good film set in an urban downtown in which a Cop tracking a dealer type ends up feeling sorry for the dealer’s girlfriend. One things leads to another & the Cop changes his focus to saving the girlfriend from the dealer proving again that the oldest trap for a strong guy is Chivalry for a lovely & seemingly helpless woman. Watch about 35 seconds of the song above from minute 3:20 to see the lovely woman say to the cop

A lovely victim woman expressing her gratitude to a hero cop for saving her. The cop finds it irresistible & gets ensnared. He ends up shooting the dealer boyfriend only then to be shot by the lovely woman he has rescued. She takes the suitcase full of drug money & tells him it was her plot from the beginning. So who saves the cop from the final bullet? Watch the clip of the final scene from “Out of Time”.

What is the difference between “Out of Time” & “Zeher”? The latter changes the location from seedy downtown to lovely, sunny Goa of sea-side beaches and nice houses while virtually keeping every scene from the Hollywood original. Of course, the biggest difference are the songs, Bollywood’s unique talent. These turn into ordinary good watch-once films into memorable ones. You can watch the entire movie “Zeher” on YouTube.